Incidentally, the AYUSH ministry had issued a press release on March 31 urging “diligence in COVID-19 claims”. 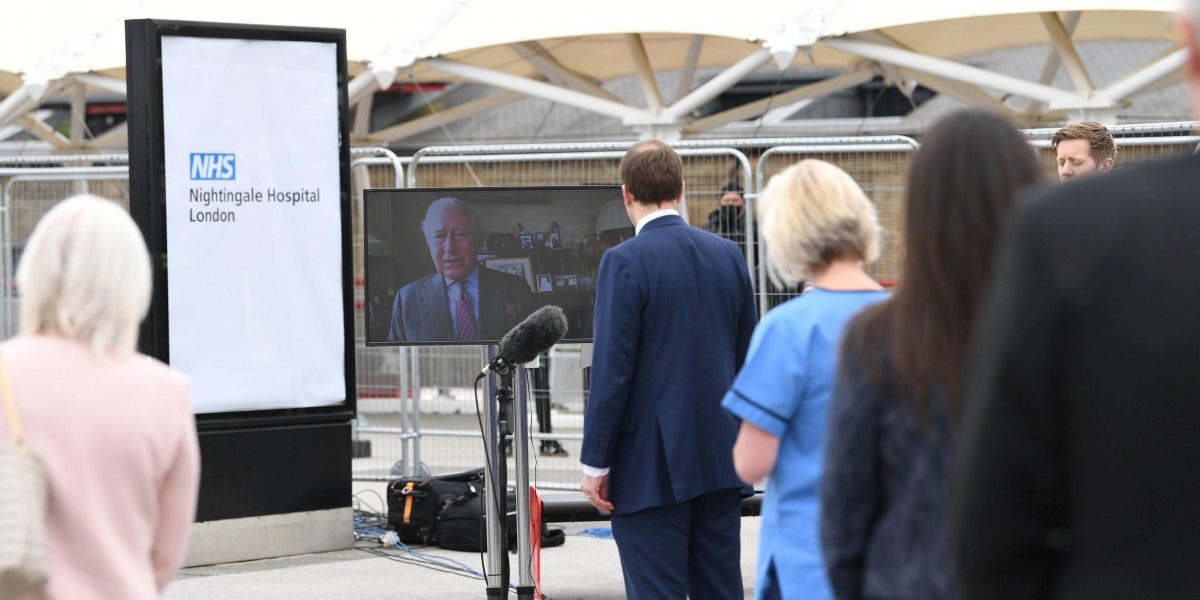 Prince Charles, while in Scotland, sends a video message to guests at the opening of the NHS Nightingale hospital, in London, April 3, 2020. Photo: Reuters/Stefan Rousseau

New Delhi:  The Modi government appears rather eager to press the credentials of ‘AYUSH’ in the fight against the coronavirus – so much so that that the minister in charge of indigenous alternative medicine systems has claimed that an Ayurveda practitioner had cured Prince Charles of COVID-19. The prime minister also chose to stress the importance of ‘Indian’ approaches in his ‘get well soon’ phone conversation with the British heir on Thursday.

Within a day, however, British officials moved to deflate India’s claim, saying that the Prince of Wales had been cured by UK’s National Health Service (NHS).

On April 2, Prime Minister Narendra Modi spoke to Prince Charles over the phone. The MEA’s press note of the conversation referred to Modi expressing satisfaction at the Prince having recovered from his “recent indisposition”.

Prince Charles had tested positive for coronavirus as per an announcement on March 25. He recovered and ended his self-isolation after five days.

The press release’s concluding paragraph was about Modi thanking Prince Charles for “the keen interest he has always taken in Ayurveda”. The PM informed him about the yoga videos and dissemination of traditional remedies to enhance immunity. “HRH The Prince appreciated the potential of these initiatives for enhancing health and wellbeing, especially in the present situation,” added the MEA’s readout.

The same day, minister of state for AYUSH Shripad Naik stated at a widely-reported press conference in Goa that Prince Charles got cured of COVID-19 through Ayurveda and homeopathic treatment from an Ayurvedic resort in Bengaluru. This statement was repeated by various media outlets, including to news agency IANS. Naik stated that a doctor who runs a resort had informed him about treating Prince Charles successfully.

“I will give you an example. I got a call from Dr Mathai, who runs a Soukya Ayurvedic resort in Bengaluru. Prince Charles was suffering from coronavirus. He (Mathai) called me and said my (treatment) was successful. Using Ayurveda and Homeopathy medicine, Prince Charles has been cured of coronavirus,” he told the Deccan Herald.

AYUSH is an acronym for Ayurveda, Yoga and Naturopathy, Unani, Siddha and Homoeopathy, loosely described as Indian or alternative ‘systems of medicine’.

The minister also said that a special task force had been put together to study the medicinal formulations used to treat Prince Charles. “Dr Mathai has been asked to submit the treatment report to us,” Naik said.

Within a day, Clarence House, the official residence of the Prince of Wales, repudiated this claim. The Hindustan Times was the first to report the denial on Friday night.

When The Wire contacted Charles’s office for clarification on the Indian minister’s claim, the answer was the same. “This information is incorrect. The Prince of Wales followed the medical advice of the NHS in the UK and nothing more,” said a Clarence House spokesperson in an email.

The website of Soukya – ‘Dr Mathai’s international holistic health centre’, a 30-acre resort, gives prominent space on its main page to Prince Charles, with a video message for the inauguration of a conference organised in 2013.

There are also more recent photographs, including one of Prince Charles and his wife, the Duchess of Cornwall, during their six-day stay at the resort.

The Wire contacted an aide of Dr Isaac Mathai about the claims of recovery, but was told that he would not comment to the media.

The press note said that the ministry was using “using platforms like video conferencing and social media to reach out to AYUSH practitioners and involve them in stopping and discouraging false and unsupported claims”.

This was a topic discussed in a video conference of the Minister of commerce and railway, Piyush Goal and Shripad Naik with AYUSH practitioners, a day earlier. “In a video conference held on 30th March 2020, nearly hundred thought leaders from different disciplines of AYUSH participated, and among other things, also resolved to work for spreading awareness against such inappropriate claims,” it said.

Meanwhile, the Indian government has also been active in promoting Ayurveda and yoga during this coronavirus pandemic as a projection of India’s soft power outside the country.

All Indian missions abroad have been heavily posting yoga videos showing an animated Prime Minister Narendra Modi demonstrating asanas. The Indian prime minister had also tweeted an ‘Ayush ministry protocol’ on boosting immunity during COVID-19 pandemic, which has also been promoted by Indian missions abroad on their social media accounts.

The importance that India puts on promoting Ayurveda and yoga at this time is evident by their frequent mention in Modi’s conversations with world leaders last week.

A readout of the Modi’s phone call with Emmanuel Macron dated March 31 stated that the French president welcomed the prime minister’s “suggestion” that yoga practice is a convenient way for ensuring mental and physical well-being for people confined to their homes. “He (Macron) confirmed that yoga has been winning new practitioners in France during the present health crisis,” said the MEA press release.

Similarly, Modi brought up with German chancellor Angela Merkel about “recent Indian initiatives to disseminate simple yoga exercises and immunity-enhancing Ayurvedic remedies for people of the world”. “The chancellor agreed that such practices could be very beneficial for enhancing psychological and physical health, especially under the present lockdown conditions,” said the press communique.