China's 'Amassing' of Troops Along LAC is Reason for Ladakh Standoff, Says India

The MEA also said the recent shift in the Chinese position on the Galwan Valley, with Beijing making "unjustified and untenable claims", has also aggravated the situation. 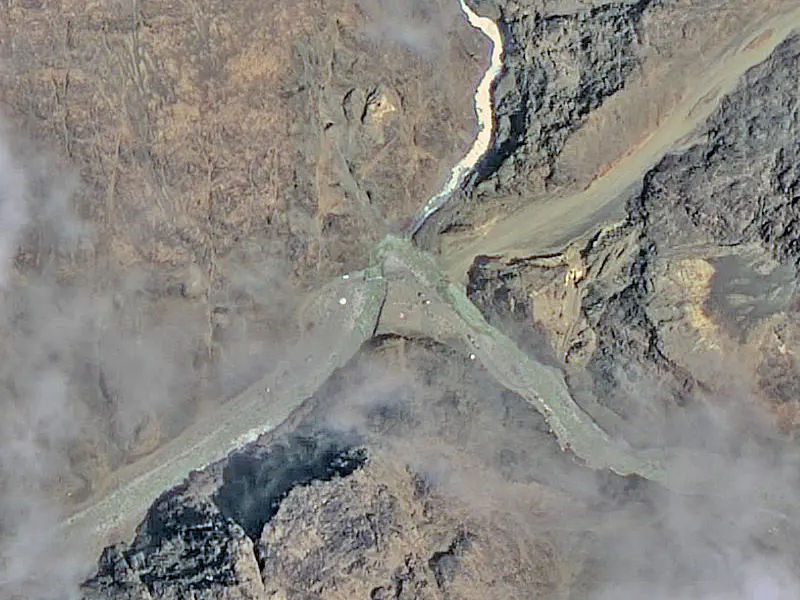 Satellite image of bend in the Galwan river where Chinese and Indian troops clashed on June 15. Photo: Twitter

New Delhi: India on Thursday said that the key reason for the current crisis along its northern border is that China had amassed a large contingent of troops and armaments along the Line of Actual Control and obstructed Indian patrolling “in complete disregard of all mutually agreed norms”.

The long and detailed statement from the Ministry of External Affairs spokesperson was issued a day after spokespersons of China’s ministries of defence and foreign affairs had ramped up the rhetoric and accused India of instigating the current stand-off.

Reiterating the message from Beijing, Chinese ambassador to India, Sun Weidong in an interview to Press Trust of India on Thursday that the situation has been “completely instigated by the Indian side and the responsibility does not lie with the Chinese side”.

The MEA’s response has been to say it is the exceptional nature of China’s desecration of bilateral border agreements that precipitated the stand-off at three point on the Line of Actual Control and took the lives of 20 Indian soldiers on June 15.

“The incidents and face-offs along the LAC need to be understood in the larger context of recent developments. That also helps to bring out the key issues that both sides are seeking to address,” said MEA spokesperson Anurag Srivastava at the weekly briefing.

The “heart of the matter”, said Srivastava, was “China amassing a large contingent of troops and armaments along the LAC” since early May. This led to Indian responding with counter deployments and the “resulting tension has thereafter expressed itself”.

He said that the unusual build-up of Chinese forces had not been in accordance with bilateral agreements, especially the 1993 Agreement on the Maintenance of Peace and Tranquility along the Line of Actual Control in the India-China Border Areas. “This notes in particular that ‘each side will keep its military forces in the areas along the line of actual control to a minimum level compatible with friendly and good neighbourly relations between the two countries”. The Indian diplomat was quoting clause 2 of the 1993 agreement which was signed during the visit of the then prime minister, Narasimha Rao, to Beijing.

This is probably an indication that India’s position during diplomatic talks is for the return of the status-quo ante on the LAC, that could also mean a dismantlement of the Chinese military build-up on the other side.

The MEA spokesperson also indicated that China has been obstructing India’s patrolling in the “last many years” which is often followed by efforts to “unilaterally change the status quo”.

“While there have been occasional departures in the past, the conduct of Chinese forces this year has been in complete disregard of all mutually agreed norms,” stated Srivastava.

According to Indian military sources, the end of winter usually heralds the start of exercise season in the high Himalayas, and both armies have their traditional grounds to conduct them after informing the other side as per protocol.

However, the Indian military observed that in violation of the agreements, the Chinese troops were not at the traditional military grounds but had been transported and moved towards the LAC and spilled out into the Galwan valley.

India had always believed that unlike in other points on the LAC, the boundary at Galwan was ‘settled’ and had conducted its patrols in the region in a regular manner.

It was the blockade of the Indian patrol team at Galwan, which led to physical scuffles on May 6 and marked the start of the current crisis. Chinese troops eventually spread out to other parts of the LAC in the western sector, initiating stand-offs at Hot Spring and Pangong Tso lake.

The nadir was the violent face-off on the night of May 15 in Galwan when India said that 20 Indian soldiers were killed. Chinese casualties are not known.

“The deployment of [a] large body of troops and changes in behaviour has also been aggravated by unjustified and untenable claims. The recent shift in the Chinese position on the Galwan Valley is one example,” said Srivastava.

According to Indian military sources, Chinese troops had not come down to Galwan after 1962 – and neither was the Chinese claim line as depicted in available public maps encompassing the entire region. After the violent face-off, China has for the first time publicly laid claim to the entire valley, which would give Chinese troops a dominating position on India’s strategic Darbuk-Shyok-Daulat Beg Oldie (DSDBO) road, which runs along the Shyok.

An indication of the area that China would like to control was revealed when statements from Beijing insisted that the Indian side had agreed to an “understanding” not to conduct patrols beyond the Galwan estuary. India has denied any such understanding.

The Indian spokesperson said that the maintenance of peace and tranquility in the border is the “basis” of the India-China bilateral relationship. “A continuation of the current situation would only vitiate the atmosphere for the development of the relationship”.

After the June 15 clash, the two foreign ministers had a conversation two days later, which was followed by a meeting of senior military commanders on June 22.

At the diplomatic level, the Working Mechanism for Consultation & Coordination on India-China Border Affairs met on Wednesday, which India described as a “significant development.

“We expect the Chinese side to sincerely follow up on this understanding (reached on June 6 between military commanders) and ensure the expeditious restoration of peace and tranquility in the border areas,” added Srivastava.

Meanwhile, in his interview to PTI, ambassador Sun also insisted that India had violated the 1993 and 1996 bilateral agreements. He reiterated Chinese demands that the Indian side should “conduct a thorough investigation, hold the violators accountable, strictly discipline the frontline troops and immediately stop all provocative acts to ensure such incidents will not occur again”.

He described the current situation at the border as “stable and controllable”. “We hope the Indian side meets the Chinese side halfway, avoids taking actions that may complicate the border situation and takes concrete actions to maintain stability in the border areas,” said Sun.