Vipassana is being advertised, popularised and patented in the West as the therapy of ‘mindfulness’, and India is losing the opportunity to make the practice globally relevant. Vipassana is based on two main tenets – concentration and self-observation. Credit: Pixabay Despite India’s recent progress, its international influence is not commensurate with its size, might and tradition. India is often critiqued for being unable to punch above its weight, or even according to its weight. Time and again, we have noticed that economic strength and military might have their limitations. The potential for Indian soft power, however, is enormous, but has remained underutilised. On the occasion of Gautama Buddha’s birth anniversary, I posit that India should reclaim Buddha and his philosophy, including his practice of Vipassana, as an Indian ideological, philosophical and lifestyle export to the world at large.

Vipassana is one of the oldest forms of meditation, dating back nearly 2,500 years. It was developed by Buddha himself and is an integral part of the Buddhist philosophy and practice. It doesn’t ask you to believe in anything, but to test ideas first. Vipassana, as a concept, is also secular in nature and is a technique not bound by any religion.

To put it simply, Vipassana is based on two main tenets – concentration and self-observation. During Vipassana, a person sits down and focuses on her breathing, which is the most natural and continuous process. The individual then observes the pleasant and unpleasant sensations in the body, realising the impermanence of such sensations, in turn realising the impermanence of happy and sad feelings and thoughts that lead to these sensations.

In this realisation, a person embarks on the path to equanimity, happiness and joy. Scientific studies have acknowledged the numerous benefits of mindfulness and linked it to the reduction of stress, better emotional strength, intelligence and a peaceful state of mind.

Vipassana has sadly, however, become the ‘spiritual turmeric’ of India. It is already being advertised, popularised and patented in the West as the therapy of ‘mindfulness’ and India is unfortunately losing the opportunity of making Vipassana relevant, as Western techniques and nomenclature slowly establish a hegemony in the global market for meditation. Alongside the loss of potential commercial gains, India will also cede its spiritual and philosophical richness to others.

It is therefore crucial that India assert Vipassana as the most holistic, sophisticated and ancient form of meditation, as opposed to ‘mindfulness’ which represents only a superficial part of Vipassana. It should be primarily marketed as a niche Indian practice, with the highest level of authenticity and effectiveness, and publicised as a gift from Buddha’s land to the world. 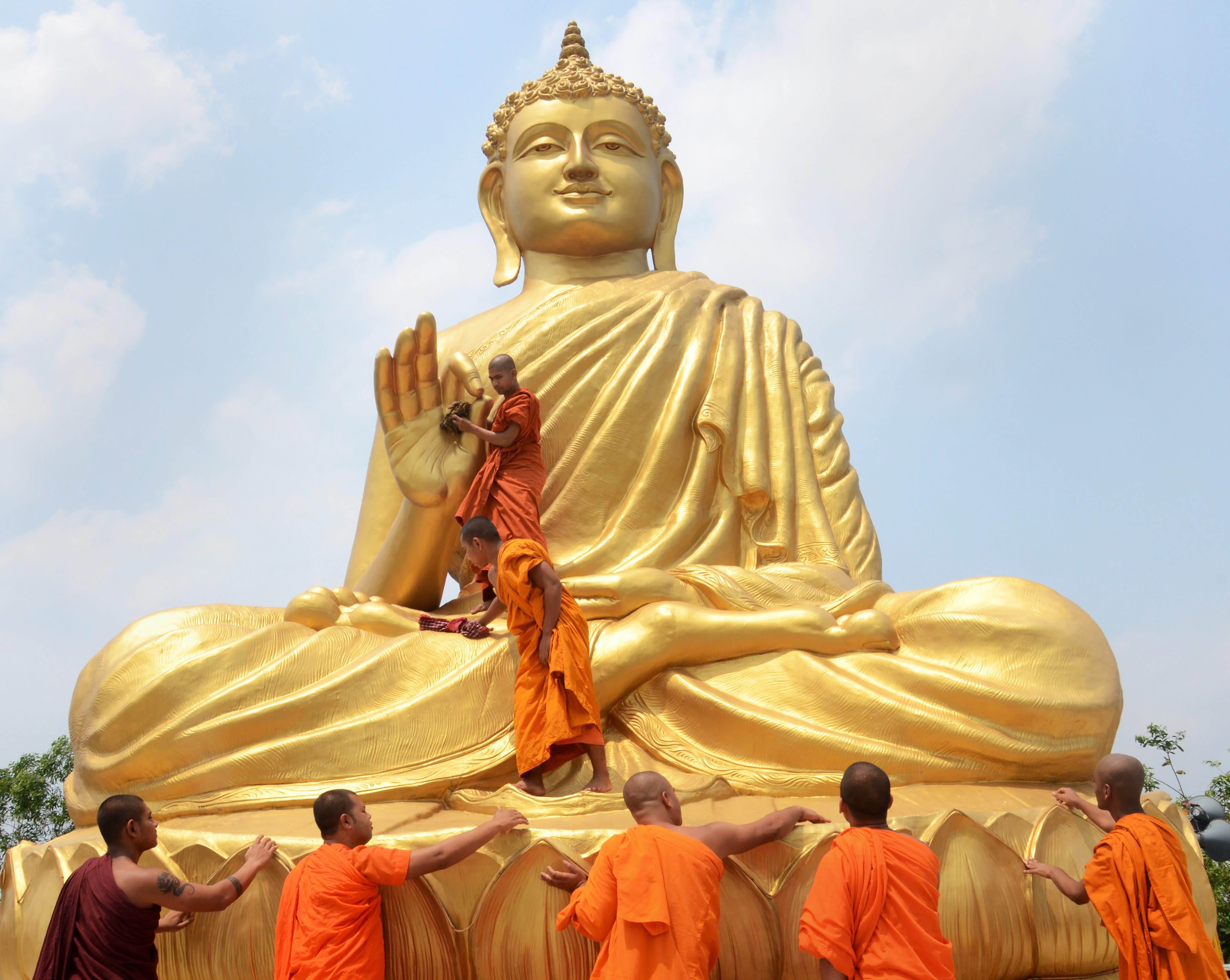 Buddhists monks clean a statue of Lord Buddha ahead of Buddha Purnima festival in Howrah on Wednesday. Credit: PTI

India now possesses the fastest-growing ‘wellness tourism industry’, ranked 12th in the world as of July 2017. As of 2016, the Indian wellness industry was worth Rs 490 billion, with wellness services comprising 40% of this market. Following the widespread popularity of yoga in the last few decades, there is enough momentum for ancient Indian traditions and practices. Meditation is now a valuable ‘commodity’ with immense commercial value. India also has the highest number of Vipassana centres in the world, along with the most popular and credible ones. However, in the list of top ten meditation centres in the world ranked by CNN Travel, only one Indian centre was included.

To propagate Vipassana effectively, there needs to be an adequate framework to support its popularisation. The inspiration for this can be taken from the framework made by the Ministry of Tourism for wellness and health tourism, and Ministry of Ayurveda, Yoga and Naturopathy, Unani, Siddha and Homoeopathy (AYUSH) for propagating yoga internationally, and on aspects such as certification and quality control.

However, a Vipassana initiative cannot be completely state-managed. The founding of a state-supported ‘Vipassana Association of India’, formed by stakeholders (individuals and organisations) that are engaged in research, practice etc, can serve the purpose of connecting private and voluntary organisations with the government. Other ways could be organising summits and global conferences involving leading Buddhist scholars and practising monks. Similar to organising various events on International Yoga Day, Indian embassies and Indian associations abroad could organise Vipassana sessions, especially on occasions such as Buddha Jayanti. India could move for recognition of Vipassana as World Intangible Cultural Heritage at the UNESCO. Vipassana could also be supported through universities focusing on Buddhist studies and research in the science of Vipassana and its effect on mental and psychological wellness.

A suitable framework built for Vipassana as a concept with global relevance and prominence can not only reap commercial benefits, but also offer its great potential for expansion of India’s underutilised soft power. It is time for India to also take the lead to incorporate Vipassana, Buddhism and its philosophy of social justice, equality and non-violence into the country’s normative framework or worldview, thus underscoring the country’s rightful place in the world as an ideological pioneer.

Devyani Khobragade is an Indian Foreign Service officer who is currently a Director in the Ministry of External Affairs, New Delhi.