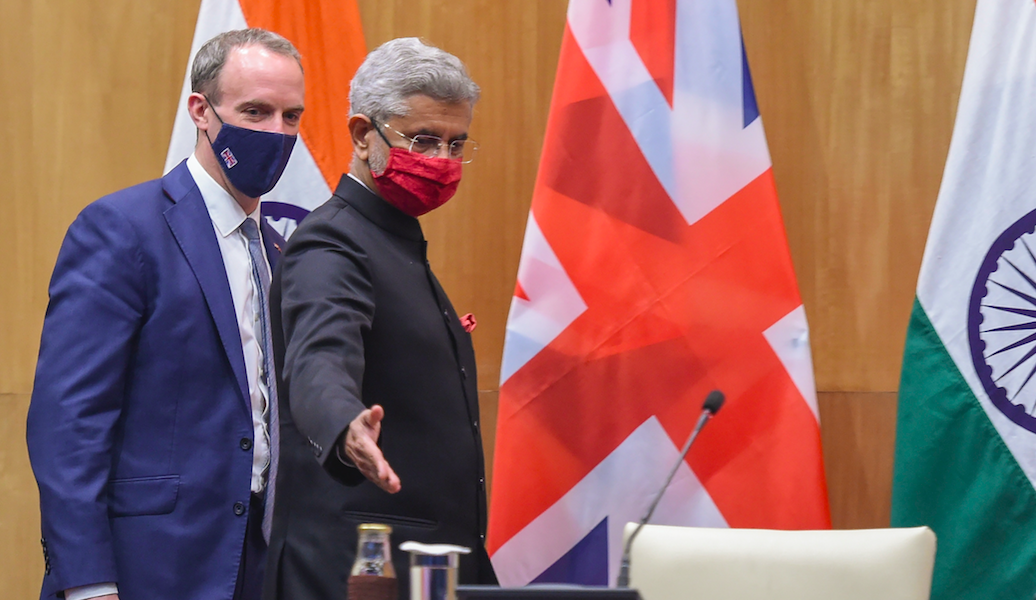 New Delhi: Ahead of Prime Minister Boris Johnson’s visit to New Delhi next month and the United Kingdom grappling with a possibility of a no trade deal with the European Union, UK has made it clear that the country’s top priority is setting up a “Enhanced Trade Partnership” that can lead to a free trade agreement with India.

This was conveyed by the UK foreign secretary Dominic Raab in his remarks to the media after four hours of discussions with external affairs minister S. Jaishankar on Tuesday. Raab is on a four-day visit to India – which is the second visit by a foreign minister to New Delhi after US secretary of state Mike Pompeo in October since the pandemic.

Raab’s visit was largely to set the agenda Johnson’s visit in January 2021 as chief guest at Republic Day celebrations in New Delhi.

“Prime Minister Boris Johnson has invited Prime Minister Narendra Modi to join the UK-hosted G7 summit next year. The UK Prime Minister has also accepted the very generous invitation to attend India’s Republic Day celebrations (as chief guest) in January which is a great honour,” he announced at media interaction. Johnson will be the sixth UK leader to be the invited for Republic day celebrations since 1950.

Jaishankar added that UK PM’s presence as chief guest for Republic Day will be “symbolic of a new era”. He said the visit would “drive” the two sides to put in place “new mechanisms” in place, indicating that there could be an upgrade in the “strategic partnership”.

The visiting minister laid it out on the table that the UK wants a trade deal with India as an urgent priority.

“I think we share the belief that we can do even more together on our shared priorities in the months and years ahead. For the UK, we see those priorities along the following lines. First of all, we want to deepen our economic partnership,” stated Raab.

He noted that India-UK trade, before COVID-19 devastated the world economy, had been growing at 11% and stands at over $32 billion.

“Now what we want to do is take that up to another level working towards agreeing an enhanced trade partnership next year – which itself we hope will be a stepping stone towards a future Free Trade Agreement,” added Raab.

He advocated that this could unlock “huge opportunities for British and Indian businesses lowering barriers in areas like food and drink, healthcare and life sciences, IT, data, chemicals and financial services”.

Raab also admitted that trade talks could be protracted. “Trade negotiations, even between close friends, have to benefit each other,” with Jaishankar adding that the trade ministers of both countries have already talked to each other.

“We as foreign ministers see a powerful strategic case and we want to nudge our trade negotiators along and see what we can achieve,” stated the UK foreign secretary.

Agreeing, Jaishankar added, “We see the strategic case and we will be nudging them along”.

He also dismissed a media question that India’s failure to join the regional free trade agreement, RCEP, meant that there was a question mark on whether a deal with UK will materialise. “I think you’re comparing apples and oranges. UK wasn’t part of the RCEP. So, I am not sure that our experiences and decisions on RCEP front really carry over to discussion with UK…There is, I think, a serious intent to take our trade relationship forward”.

The UK is currently facing the daunting prospect of leaving the EU in two weeks without a trade agreement, four years after Johnson led the successful campaign for the island nation to leave the regional bloc.

In fact, one of the key points of the Brexit campaign had been that UK was not able to increase its trade volume as EU membership stopped it from having trade deals with countries like India.

“Locked in the EU, we cannot do free- trade deals with some of the fastest growing economies — in South-East Asia, China, India or the Americas — because our trade policy is entirely controlled by the EU Commission, where only 3.6 per cent of officials come from this country,” Johnson had written in June 2016.

However, while UK has been pushing for a trade deal since Brexit, India had preferred to wait for the contours of Britain’s trade agreement with EU to be clearer. A major stumbling block had been UK’s restrictive visa policies for foreign students, which had miffed New Delhi.

He also said that both sides were working on a “10-year roadmap”, whose “key elements” were agreed upon by the two sides during discussions with his Indian counterpart on Tuesday. This is likely to be a major takeaway which would be announced during the visit of the UK PM.

Raab is scheduled to call on Prime Minister Narendra Modi on Wednesday, following which he will travel to Bengaluru.