Biden to Modi: Gandhi’s Message of Tolerance, Respect, Diversity Needed More than Ever

One day earlier, US Vice President Kamala Harris told the PM that as democracies around the world are under threat “it is imperative that we defend democratic principles and institutions within our respective countries". 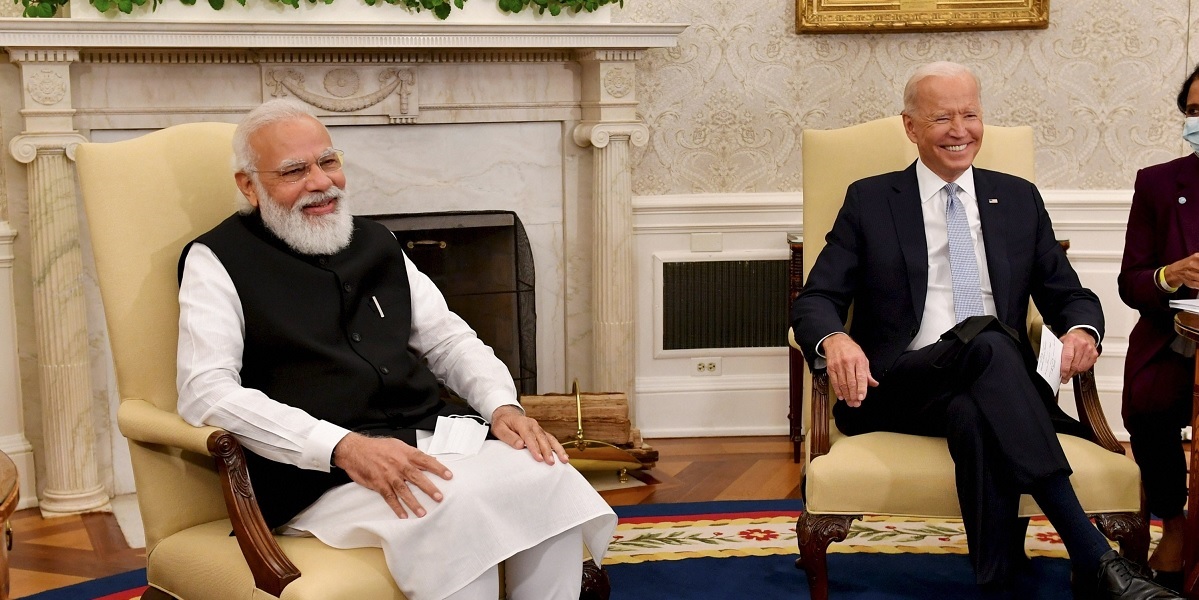 Prime Minister Narendra Modi with US President Joe Biden in the Oval Office of the White House, September 24, 2021, in Washington. Photo: PTI

New Delhi: In his first meeting with Prime Minister Narendra Modi, US President Joe Biden spoke about the need for non-violence, tolerance and diversity in current times, even as he said that both countries are destined to be “stronger, closer and tighter”.

Biden’s comment marks the second time the US has spoken to Modi in public about the importance of democracy in as many days. Vice President Kamala Harris on Thursday said “it is imperative that we defend democratic principles and institutions within our respective countries”. These remarks come against the backdrop of growing concerns abroad over the rise in anti-Muslim rhetoric in India and curbs on dissent. “Kamala Harris presses India’s Modi gently on human rights in historic meeting,” the Los Angeles Times reported in its headline.

Modi was welcomed by Biden to the Oval Office in the White House on Friday morning for their first face-to-face meeting since the change in US leadership. Modi had met Biden in the latter’s vice-presidential avatar during his state visit to the US in 2014.

Modi last trip to the United States was two years ago when he and President Donald Trump attended the ‘Howdy Modi’ rally in Houston.

Following Biden’s presidential inauguration in January, the two leaders participated together in several virtual multilateral fora and have also spoken  over the phone multiple times. After their formal bilateral talks, they took part in the first in-person of the Quad summit with leaders from Australia and Japan.

No questions were taken by either leaders at the end of the 20-minute-long joint press appearance in the Oval Office, a decision reached by prior agreement. After fielding unscripted questions during his meeting in London with David Cameron in 2015, Modi has never consented to another press conference.

As they took their seats for their press statements ahead of the formal talks, Biden observed that the “Indian press is much better behaved than the American press”. “And I think, with your permission, we should not answer questions because they won’t ask any questions on point,” he added, to which Modi stated that he completely agreed.

Biden began with the boilerplate observation that the relationship between India and US, “the largest democracies in the world, is destined to be stronger, closer and tighter, and I think it can benefit the whole world”.

He claimed that a “new chapter” in the history of US-Indian ties has been launched with both countries “taking on some of the toughest challenges we face together, starting with a shared commitment to ending the Covid pandemic”.

Delineating the agenda of the talks, Biden said that he and Modi would talk about COVID-19, climate change and also strategic issues, like, ensuring stability in the Indo-Pacific, including with our Quad partners.

“Of course our partnership is more than just what we do. It’s about who we are. It’s rooted in our shared responsibility to uphold democratic values, our joint commitment to diversity, and it’s about family ties, including four million Indian-Americans who make the United States stronger every single day,” he said.

Along with talking of democratic values, Biden also mentioned the need for tolerance, although he couched his advice to Modi by noting that Gandhi Jayanti was next month.

“As the world celebrates Mahatma Gandhi’s birthday next week, we’re all reminded that his message of nonviolence, respect, tolerance matters today maybe more than it ever has,” he said.

The Indian foreign secretary Harsh Vardhan Shringla denied that Biden’s emphasis on tolerance and democracy was a rebuke to India. “In fact, India is ingrained in exactly those areas… So I would see it as a reaffirmation of our democracy. A sense of the fact that India and the United States represent two vibrant dynamic democracies that are on the move,” he told reporters in Washington.

In his remarks to Biden on Friday, Modi acknowledged Gandhi’s birth anniversary, but linked the key topical message of the father of the Indian nation as being about “trusteeship” of the earth, a point his predecessor Manmohan Singh used to frequently make in the context of the environment.

Affirming the outline of India-US talks articulated by Biden, the Indian PM also added technology and trade as two other areas of cooperation.

Following the talks, Modi tweeted that he had an “outstanding meeting” with Biden. “His leadership on critical global issues is commendable. We discussed how India and USA will further scale-up cooperation in different spheres and work together to overcome key challenges like COVID-19 and climate change”.

In his public remarks, Modi had also expressed pleasure that the Indian diaspora was making an “active contribution” in the progress of the United States.

Biden too pointed out that his running mate and vice-president, Kamala Harris, had Indian heritage. “When I showed the Prime Minister to his seat, I pointed out that seat is occupied almost every day by an Indian American. The Vice President’s mother was from India: a scientist and a remarkable woman,” said Biden.

He also alluded to another Indian connection of an ancestral nature.

The US President recalled that the Indian press had asked him whether he had any Indian relatives during his visit to Mumbai during the Obama administration.

The next day in Mumbai, he was told by Indian reporters that there were five Bidens in India.

Subsequently, he found about the existence of a Captain George Biden, a “captain in the East India Tea company [sic] in India”.

Turning towards Modi, Biden bantered, “That’s hard for an Irishman to admit.”

“The end result was he apparently stayed and married an Indian woman and I’ve never been able to track it down, so the whole purpose of this meeting is for him to help me figure it out,” he said, laughing.

Speaking in Hindi, Modi added, “Well, after you mentioned it to me, I hunted for documents and today I have brought along some documents. Maybe we’ll be able to take this matter forward and maybe those documents could be of use to you”.

Slapping his knee and laughing, Biden asked, “Are we related?”, to which Modi answered, “Yes”.