Every year, Bhutan’s prime minister gets up in the middle of the year to present the annual report of his government to the parliament as stipulated in the constitution. This year, was no different. For Tshering Tobgay, it was his sixth and last ‘state of the union’ speech before the National Assembly is dissolved in August.

With an eye on the elections, the focus of Tobgay’s speech on June 30 was improvement in the economy during the 11th five year plan, which coincided with his tenure.

As expected, the report also dwelled on Bhutan’s foreign policy with the aim of “protecting our sovereignty and security to ensure that we remain independent for all times to comes,” he said. 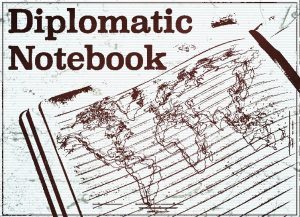 After the customary reference to excellent relations to India, Tobgay then came to China. India obviously gets multiple mentions in the annual reports due to multi-layered ties, but the current prime minister has also referred to China in five out of six speeches delivered to Bhutanese parliament since 2013. It usually follows a template of a statement about Bhutan’s “warm” relations with China, followed by the latest update on boundary talks.

This formula was also followed this year, but with significant difference.

“Our relations with China, the second largest economy in the world and an emerging global power is increasing and we continue to maintain peaceful and cordial relations,” said Tobgay.

On the border talks, he noted, “24 rounds of boundary discussions have been held so far and both sides are committed to finding a mutually beneficial solution.” This was, of course, the first annual report following the 72-day-long standoff between Indian and Chinese troops on Doklam region claimed by Bhutan in 2017.

Tobgay ended this section with a noteworthy sentence: “The government continues to take a strategic long-term view of our engagement with China to ensure that our national interests are secured.”

This comment on Bhutan-China relations was striking, since mentions about the northern neighbour have been boilerplate in previous speeches.

Bhutan does not have formal diplomatic relations with any of the permanent five, including China. But, as an immediate neighbour, ties with China have extra sensitivity.

In 2012, India was annoyed when the previous Prime Minister Jigmi Thinley met with the Chinese Premier Wen Jiabao in Rio. Bhutan had denied that Thinley had wished to “forge” diplomatic relations with China at an early date, but there were serious concerns in Delhi.

Tobgay is known to have a good rapport with the Indian government, which has certainly helped New Delhi to be more responsive in issues like demonetisation. This statement may not be a signal to external players, as much as targeted towards the domestic audience.

As the Doklam crisis made clear, there is also a vocal group, which may still be tiny and largely confined to social media, who have been advocating normalising relations with China and reducing dependency on India.

When Tobgay talked about a “strategic long-term view” on engagement with China, he was likely speaking to this small, but vocal constituency within Bhutan. “It is not about what the (Bhutan PM’s) statement actually says. It is more important to look at what led to this sentence being included in the speech. What concerns was it addressing?” asked Omair T. Ahmad, author of a book on Bhutan’s history and politics.

The annual gathering of Indian ambassadors for three days is the in-house equivalent of foreign policy conferences that dot the Indian capital, but with the advantage of being candid in their discussions as there are no ‘outsiders’ in the room. It is also the time for ambassadors, who have been away from the headquarters for long periods of time and looking for their next prestige posting, to get some attention amidst their peers and seniors with their enthusiastic participation.

Unlike previous editions, there was no separate session which discussed the immediate neighbourhood. Instead, it became clear that the priority for the next year would be projection of India’s ‘soft power’ – with Mahatma Gandhi as the ‘face’ for these efforts.

There was an entire session during the three-day conference on harnessing the 150th birth anniversary of Gandhi worldwide. The government has already set up a national committee on the commemoration which would start from October 2 this year and will continue till 2020.

Among the suggestions thrown up during the discussions included the release of thousands of balloons across the planet on October 2. There was also a proposal to hold ‘charkha talks’ along the line of Ted Talks, but with a Gandhian bent of mind. No decision has so far been taken on the final shape of events that missions will have to undertake over the next two years. 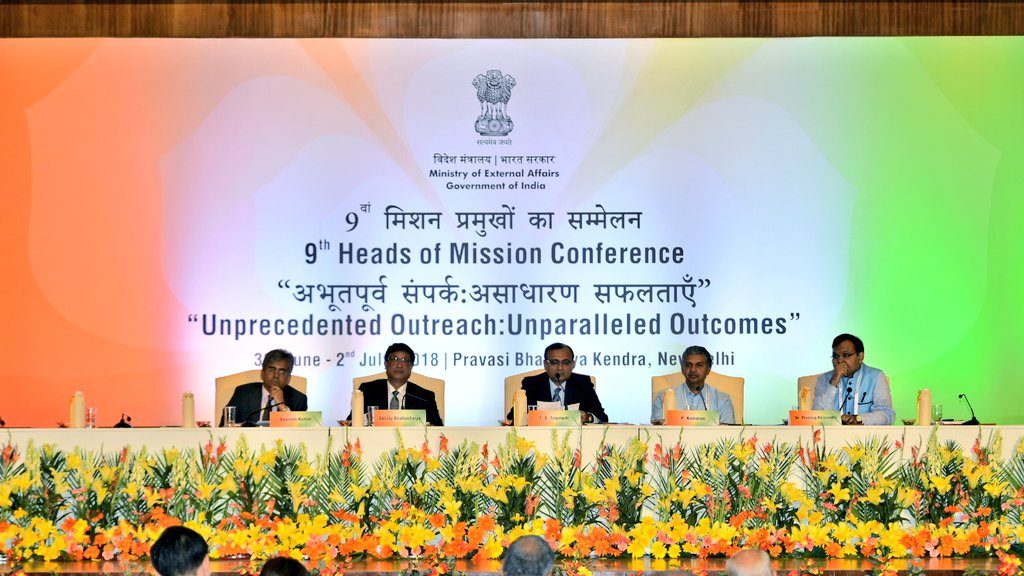 On the last day, Prime Minister Narendra Modi set the tone on foreign policy priorities by putting an emphasis on soft power. He talked about India being the “thought leader” in the international community,

Modi also flattered the phalanx of Indian diplomats by telling them that the Ministry of External Affairs was the only ministry which had not courted any significant controversy.  He also praised the external affairs minister Sushma Swaraj. His speech was on July 2, when the social media storm over a passport for an inter-faith couple was at its height, especially after Swaraj had highlighted the abusive tweets directed at her.

Earlier during the conference, there was a session on the Indian Ocean region, where discussants noted the idea of a networked maritime geography was “our concept”. There was a stress on Indian Ocean Rim Association (IORA), but there was still ambiguity about the ‘Quad’. While India had to look at Indian Ocean in an integrated fashion, there was also awareness that particular sections had their own dynamics. A side discussion on whether it would be beneficial to consider the Arabian Sea as part of the Indo-Pacific was also held.

During a session on the duality in the great power structure, quite a few Indian ambassadors were sceptical that the world had become bipolar. With China on their mind, the Belt and Road initiative (BRI) was not too far. India, obviously, has one of the strongest positions on China’s BRI, but there were also enough views in the hall at Pravasi Bharatiya Kendra that India had to find a way to work with Beijing and not box themselves in a way that there was not much room to navigate.

Monsoon effect on return of Indian gift to Maldives

The two Advanced Light Helicopter will not be back in India in a hurry. Maldives had asked India to take them back by end of June. But, despite the end of the ‘deadline’ and some media reports of imminent return of choppers, New Delhi is waiting for Maldives to take the next step.

“This was a gift from us on Maldives’ suggestion. They are asking us to take it back, but the timing has to be right for us to take it back also. Would you jump and go straight to someone’s house just because they asked to take back a gift?” said a source.

India has a plausible reason to keep the two choppers in Maldives. Because of their short flight range, the two helicopters have to be transported by ships to the Indian mainland. “The sea is very choppy from July to October. Not sure if there will be a weather window to get them out”.

Maldives has to still to extend the visas of the Indian crew which expired last month.

India had promised to deliver a Dornier, but the paperwork is still to be completed.

On the other hand, India and Maldives held a joint staff meeting last month, where the whole gamut of defence ties was discussed, especially training.

Filipino president Rodrigo Duterte has garnered a reputation of being ‘soft’ on China, largely based on his initial policy of not pursuing Philippines’s legal victory on South China sea at the Permanent Court of Arbitration. But, for many diplomats and observers, Duterte’s policy is more pragmatic, rather than being pro-China. 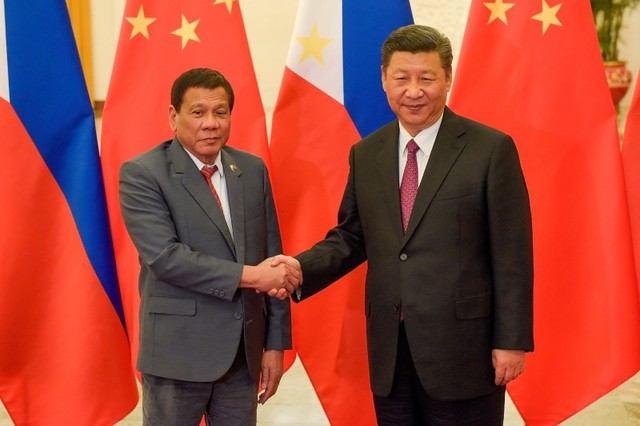 In fact, Duterte had surprised his host and fellow guests at the Asean-India commemorative summit by not following the tight script during such protocol-heavy events and expressing his ‘true feelings’ about the Asian giant at the closed-door plenary on January 25.

Just like other leaders at the summit, he read out a written statement. But, once he finished, Duterte said while the written speech was what his diplomats wanted him to say, now he could really tell what he felt about the current regional situation. For the next six minutes or so, Duterte went off the script to talk about how China’s aggressiveness was a major threat and concern, according to sources who are in know about the contents of the meeting. The Filipino leader made his candid remarks on China despite being aware that a couple of South-east Asian close friends of Beijing were also sitting at the round table. Therefore, New Delhi does not certainly believe that Philippines is in the same category of ASEAN members with pro-china policy such as Cambodia.