Members of the Boycott, Divestment and Sanctions movement claimed the Indian defence ministry's move was a "huge blow" to the Israeli military industry. 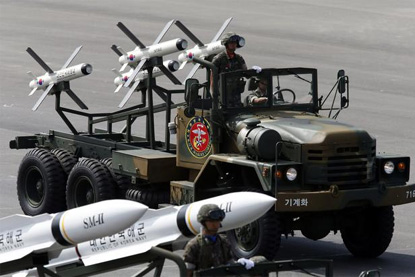 New Delhi: A global campaign to boycott Israeli industry has hailed the reported cancellation of a $500-million deal with an Israeli military firm for manufacturing Spike, an anti-tank guided missile, as a “huge blow” to the military industry of the West Asian state.

On November 20, Indian Express reported that the defence ministry has decided to cancel the India-Israeli venture as it would adversely impact the indigenous development of the Man-Portable Anti-Tank Guided Missile (MPATGM) by the Defence Research and Development Organisation.

Prime Minister Narendra Modi’s visit to Israel in July this year had given momentum to the deal.

In a press release, Jamal Juma, member of Palestinian Boycott, Divestment and Sanctions (BDS) national committee secretariat and coordinator of the ‘Stop the Wall’ campaign, said that the cancellation is a “huge blow to the Israeli weapons industry”, which he claimed was “deeply implicated in war crimes against the Palestinian people”.

“It is also a major setback for Israel’s propaganda hubris that its technology is indispensable for India’s development and modernisation. As many Indians are recognising, Israel is marketing military and agricultural technologies in India to entrench Indian dependence on Israel,” said Juma.

According to Omar Barghouti, co-founder of the BDS movement, Israel’s “regime of oppression can never be a model for the great Indian nation that once led the non-aligned movement and upheld the right of all nations to self-determination”.

He hoped that this was “the beginning of the end of Indian complicity in Israel’s egregious violation of international law and Palestinian human rights”.

The BDS campaign is a bottom-up movement of activists worldwide that seek the global isolation of Israeli institutions and firms as a means of putting pressure on Tel Aviv to end its illegal occupation of Palestinian territory.

The cancellation of the order has also got the attention of the Israeli media, with most pointing out that there has not yet been any official intimation of such a move.

The Jerusalem Post quoted the spokesperson of Rafael Advanced Defence Systems as saying that the Israeli firm had “not been officially informed of any change in the decision to purchase Spike missiles”.

The article described the cancellation as a “blow to Israeli-Indian defence ties”, even as it pointed out that India had also recently signed up to a $630 million deal for the Barak 8 system.

The Times of Israel noted that the purchase was “a major milestone in Israeli-Indian relations”, while Ynet News described it as a “flagship deal that cemented the budding Israeli-Indian security relationship”.

All the Israeli media articles noted that Rafael had opened a manufacturing complex in India, along with an Indian partner, Kalyani Group, in August this year.

The Post article speculated that there could be other factors behind the cancellation, as India had yet to master anti-missile technology. It quoted an Israeli defence industry expert to point out that earlier Israeli firms had been blacklisted for corruption, which “have more to do with internal Indian politics because there are many in India who object very much to India’s contacts with Israel”.

The expert also suggested that international competition may have played a role too. “Maybe they got a better deal from Russia,” Yiftah Shapir of Tel Aviv University’s Institute of National Security Studies told the Post.