With Bhutan Out, Modi's Plan for South Asian Motor Vehicle Movement Is Down to Three Countries

Preparing for the 2018 elections, the Bhutan government has given in to internal opposition to the BBIN agreement. 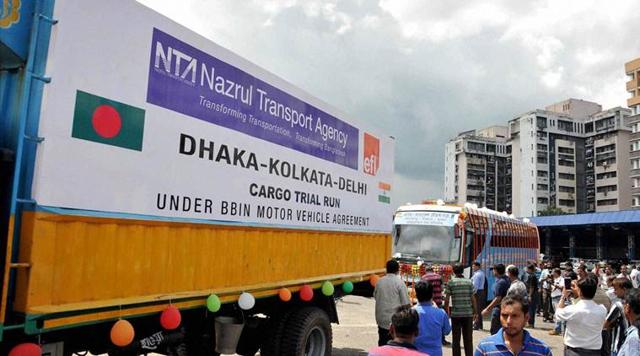 The BBIN pact allows vehicles to enter each other's territory and does away with the trans shipment of goods from one country's truck to another at the border. Credit: PTI

New Delhi: With the Bhutan government giving up on pushing through the unpopular Bangladesh, Bhutan, India, Nepal motor vehicles agreement (BBIN MVA) because of the parliamentary elections next year, India is actively considering the possibility of operationalising the sub-regional pact with only three members.

Nearly two years after ministers from Bhutan, Bangladesh, India and Nepal signed the BBIN MVA in Thimphu, the Bhutanese government withdrew the Bill to ratify the pact last week from the agenda of the upcoming parliamentary session.

Right from the time the BBIN MVA was tabled for ratification, the draft legislation faced opposition in Bhutan. Bhutanese suspicion has been that the pact to streamline movement of passenger and cargo transport among the four countries will overwhelm the smallest country in South Asia with traffic, tourists and pollution.

In New Delhi, there is understanding on Bhutan’s decision, with the People’s Democratic Party government having to keep an eye on parliamentary elections next year.

At the initial stages, there was a perception in the South Block that the Bhutan government had not exerted itself as strongly as possible in its outreach activities with various sections. But now, with the BBIN MVA not finding many takers among lawmakers and being genuinely unpopular, the assessment is that any attempt to bulldoze the legislation through would have likely have depleted the political capital of the Tshering Tobgay government ahead of the general elections in 2018 and given fodder to the opposition.

After Bhutan’s upper house, the National Council, rejected the bill last November, the only way to get parliamentary approval was to table the draft legislation at a joint sitting of both chambers. A joint parliamentary committee was formed to find a compromise.

Both the Kuensel and The Bhutanese reported that the committee in its meeting on April 20 failed to reach an agreement, with all sides sticking to their positions. After the meeting, the government announced at the discussion to set the agenda for National Assembly’s 9th session that the Bill had been withdrawn.

“Yes, we have withdrawn BBIN for now as it would be better to have something where there is a harmonious position among the people. Currently, the environment is not right for it with entrenched positions,” Tobgay said, as quoted by The Bhutanese.

The BBIN agreement Bill was passed by the lower house on its second attempt, on June 22, 2016, by 28 votes in favour in the 47-member chamber.

After passage in the National Assembly, the National Council asked its legislative committee to review the agreement.

In its report, the National Council legislative committee was highly critical of the government’s lack of outreach to stakeholders before the Bill was presented. Arguing that implementation of the sub-regional MVA will pose risks to Bhutan, the panel recommended that the ratification “at this point of time may not only be premature but counter-productive”. It also claimed that many provisions of the MVA would contradict provisions of prevailing domestic laws pertaining to passports and contracts.

The Bhutanese government had tried to assuage concerns by stating that Thimphu will be able to negotiate limits on vehicle movements and routes in the protocols to the agreements. However, the parliamentary panel report noted that if the MVA was ratified with a “blank protocol” – that is, the government could insert provisions in the protocol after the Bill was passed – then it would be a direct violation of the constitution.

The panel also pointed out that while the agreement sought to institutionalise existing informal arrangements, “current problems faced by the Bhutanese vehicles plying in the bordering Indian states and the problems created by Indian vehicles plying within Bhutan cannot be addressed by the MVA”.

“Bhutanese truckers and passengers continue to face harassments such as requirements to pay illegal money, unauthorised levies and coerced donations, aggravated by interferences of illegal and quasi-legal authorities as well as involvement of middle men. This will not be addressed by the MVA,” said the report.

The Bill was defeated in the apolitical National Council on November 15, 2016, with 13 votes against and only two votes in favour in the 25-member upper house.

With the opposition not budging and National Council members not moved to change their mind, it has been clear for some time that the gap was too wide to get the two-thirds majority required at the joint sitting of the two houses to ratify the agreement. However, the Bhutan government made repeated assurances to India and other members of the BBIN network that it was still hopeful of ratifying the Bill.

For India, the BBIN MVA is of particular significance for its neighbourhood diplomacy. Prime Minister Narendra Modi had been a persistent advocate of the BBIN paradigm – partially to demonstrate that an efficient regional pact in the South Asian context could be possible without the presence of Pakistan.

The BBIN MVA had risen from the ashes of the SAARC version of such an agreement, which fell apart at the 2014 Kathmandu summit after Pakistan objected at the last minute.

Meanwhile, with Bhutan out of the picture till the next elections at least, officials in Delhi are working to find out if there was a possible way to operationalise the deal with just Bangladesh, Nepal and India, who are still on the same page.

Officials point out that multilateral agreements usually do not require ratification from all signatories for the pact to come into force. But it is not clear if the BBIN agreement – which is the first multilateral connectivity arrangement in South Asia – will allow for this interpretation.

Sources indicated that Bhutan may likely have to give ‘permission’ to the other countries to operationalise the pact, with an assurance to join later in the future.

The India Ministry of Road Transport and Highways had already explored this option in the run-up to Bangladesh Prime Minister Sheikh Hasina’s visit to Delhi this month. Under pressure to offer some big-ticket gifts, ministry officials had suggested that there could be a MoU to get the BBIN started off first in the willing three countries. Obviously, the proposal did not muster approval in South Block then.

In fact, the April 8 joint statement did not make any direct allusion to the BBIN MVA. However, in his press statement during the visit, Modi said that both leaders “look forward to early implementation of the BBIN motor vehicles agreement”. “This would usher in a new era of sub-regional integration,” he added.

Bangladesh has not only been particularly keen to see that BBIN agreement is implemented early, but also that it remains intact. Officials understand that having the presence of all the original countries in the pact will allow for Dhaka to ‘sell’ the pact to the domestic audience. With the Bangladeshi opposition accusing the Hasina government of being generous to India, the government would prefer that it does not seem that a abbreviated BBIN MVA is perceived only as a way for India to get transit through Bangladesh.

Less than a fortnight after her India visit, Hasina went to Thimpu with the BBIN MVA high on her agenda. She asked her Bhutanese hosts to expedite the ratification process by addressing “its environmental concerns”. On the same day that the Bhutanese government announced that the BBIN MVA Bill had been withdrawn from the parliamentary agenda, Bangladesh and Bhutan released a joint statement with regional connectivity as the theme.

“The two Prime Ministers recognized the importance of BBIN Motor Vehicle Agreement for regional connectivity and expressed their desire towards an early operationalization of the Agreement,” said the Bhutan-Bangladesh joint statement on April 20.