“We believe in UN sanctions but not in country-specific sanctions. When US had previously imposed sanctions on Iran, we had continued to do business,” the external affairs minister said. 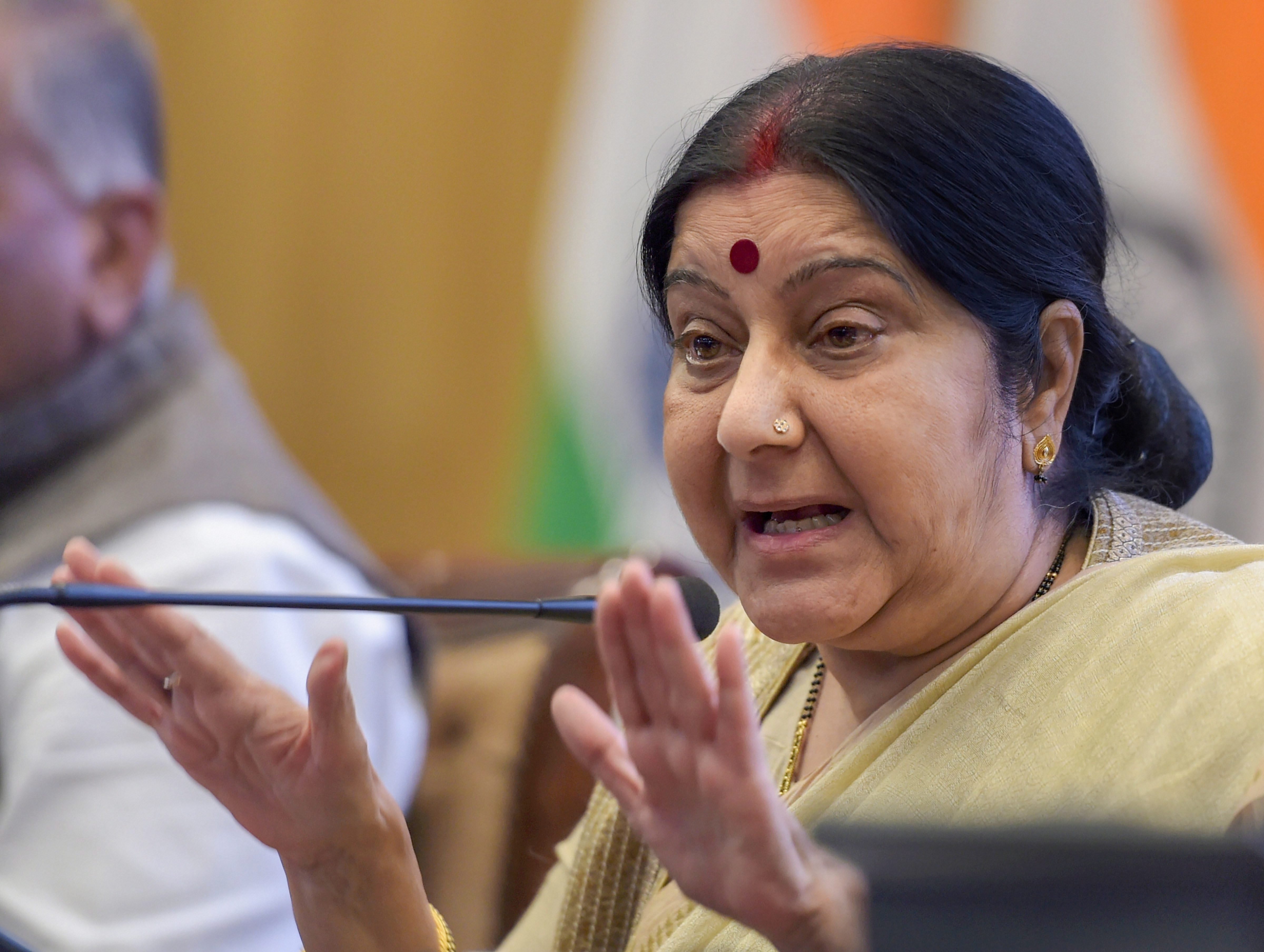 New Delhi: Ahead of her meeting with Iranian foreign minister Javed Zarif, Indian external affairs minister Sushma Swaraj indicated that India will ignore the new sanctions imposed by the United States against Iran, noting that New Delhi only follows sanctions resolutions issued by the United Nations.

“We believe in UN sanctions but not in country-specific sanctions. When US had previously imposed sanctions on Iran, we had continued to do business,” Swaraj said at the annual press conference on May 28.

Zarif arrived here on Sunday night and met with Swaraj on Monday evening, before flying out from Delhi.

A read-out from the Ministry of External Affairs said Zarif briefed Swaraj about the discussions that Iran has had with the remaining parties to the Joint Comprehensive Plan of Action, following the US’s decision to withdraw from the agreement.

“EAM conveyed that all parties to the Agreement should engage constructively for peaceful resolution of the issues that have arisen with respect to the Agreement,” said the press release.

On bilateral cooperation, the two ministers assessed the implementation of decisions during President Hassan Rouhani’s visit earlier this year, which included projects in the area of connectivity, energy, trade and promotion of people-to-people contact. India’s strategic investment in the Chabahar port also came up in the talks.

Fruitful visit to #India, building on achievements of President Rouhani’s state visit in Feb. Productive meetings on energy, banking, transportation and commerce. Excellent substantive concluding meeting with my counterpart and delegations. Resolved to expand ties in all fields. pic.twitter.com/4thQiVcprm

The press note said that accompanying members of Zarif’s delegation also had separate meetings with their counterparts earlier in the day, where they discussed measures for practical cooperation between the two sides.

It also said that India had no plans for oil trade with Venezuela using cryptocurrency, since such transactions have been banned by the Reserve Bank of India.

In her fourth and likely last annual press conference, Swaraj lashed out at the opposition for stating that foreign policy was only the domain of the prime minister’s office and claimed that criticism of her frequent use of Twitter showed their “insensitivity”. She also elaborated on India’s policy on Pakistan, the US, China and the neighbourhood.

Here are some highlights from external affairs minister’s press conference.

On criticism by the Congress

A visibly irritated Swaraj rebuked a journalist for asking a question “like a Congress spokesperson”, before she answered the allegations made by the opposition that foreign policy had been outsourced to prime minister’s office, while she was just managing a Twitter handle.

“How am I answering all your questions if I do not know about the foreign policy as I only look after the Twitter handle?” said Swaraj. She came back again and again to this point, even once saying that she was happy to extend the press conference since it showed her ability to handle foreign policy.

“We have added the people’s policy in the foreign policy. The insensitive people may laugh at it, but ask the entire nation and those Indians stuck in foreign land. They (Congress) will understand when one of their own gets stuck one day,” she said.

Swaraj continued to lash out at the Congress for keeping the ministry ‘elitist’ and not making an effort to connect to the people.

“I do not sleep and also do not let Indian ambassadors sleep,” said Swaraj about her guidance on Twitter to envoys to take action on consular complaints.

She defended her ministry against the Congress’s criticism that the government has a “flip-flop” policy on Pakistan. “The fact is that our Pakistan policy has led to its isolation among the international community and now it is under a lot more pressure.”

Swaraj said that there was no change in the government’s position on talks with Pakistan, even as she noted that the mechanism for national security advisors to remain in conversation has not stalled.

“We have separated the NSA talks from the comprehensive dialogue. We have said that terror and talks cannot go together… but that doesn’t mean we can’t have talks on terror. Under NSA-level mechanism, there are discussions on terror,” she said.

Earlier on Monday, the director general of the Pakistan Maritime Security Agency met with his counterpart in the Indian coastguard. Swaraj noted that these regular mechanisms, including the meeting between border forces and the track-2 Neemrana dialogue, will continue in the background. “When official dialogue stops, these mechanisms work.”

She reiterated that the government was always read for talks with Pakistan “but with a caveat that terror and talks cannot go together”. When asked whether India could hold talks with a new government in Pakistan, she said, “This is our position and there is no change in it.”

India had summoned Pakistan’s deputy high commissioner Syed Haider Shah to lodge a protest over ‘Gilgit Baltistan Order 2018’. She said that the Pakistan had responded with a long message which sought to go into legalities.

“Pakistan tries to teach us history and geography. It is one country which does not believe in rule of law and I would just say one thing to their answer ‘look who’s talking’.”

On Modi and Xi’s informal relationship

“As far as informal summit is concerned, this is a new dialogue mechanism. It has never been adopted before anywhere in the world. On transit, some leaders used to hold informal talks in Europe, but informal talks after an invitation is completely new,” she said.

Incidentally, Xi’s ‘shirtsleeves’ summit with Barack Obama and talks at Mar-a-Lago with Donald Trump were also described as informal summits at the time.

She said that idea behind the informal summit was to hold talks without a set agenda and not to resolve bilateral issues. “Then why was it held? There were three aims. First, smoothen relations. Second, to improve understanding on global issues. Third, increase mutual trust. All three objectives have been met. That’s why we term it successful,” said the minister.

Swaraj noted that there was a high degree of understanding between the leaders after the Wuhan summit. “Now that there is so much comfort that President Xi said that if you felt that there was something negative happening, please pick up the phone and call me directly. Prime Minister Modi also said that if you wanted to know my view on any global issue, please call me.”

In answer to another question, she reiterated that there had been no change in the status quo at the stand-off site in Doklam after the withdrawal of Chinese and Indian troops.

On US visa woes

She pointed out that 130 Congress members and Senators have written a letter to Trump telling him not to revoke H-4 visas.

“We are trying our best to save H1-B visas, H4 visas. But America is a sovereign country. Ultimately, they have to decide. How successful we will be, will be decided in the future. But I assure the country from this platform that we would not spare any effort,” she said.

On Modi’s message to the UK

A UK court’s observation that it will have to look into the conditions of Indian jails to consider the extradition of fugitive businessman Vijay Mallya led the Indian prime minister to invoke the freedom struggle.

She said that Modi had told British Prime Minister Theresa May that her country’s courts were in the wrong.

“I need to say that these are the same jails where you had kept Mahatma Gandhi, Pandit Nehru and India’s big leaders. So it’s not right for your courts to raise questions about those jails,” she quoted Modi telling May at a bilateral meeting on the sidelines of the Commonwealth Summit in London.

On not visiting the Maldives

Turning towards the neighbourhood, Swaraj noted that she had not visited Maldives despite a standing invitation from her counterpart, as the Indian Ocean nation had not taken certain steps. She did not, however, clarify what those steps were.

“We are in contact. I have got four letters from their foreign minister. He has invited me again. But last time he came here (in January), there was some actions decided that would need to be done for visit. None of those have happened yet. So my invitation is still pending,” she said.

Swaraj asserted that relations with the Maldives “are not bad but stalled”. She pointed out that despite the downturn in relations, India had not cut back on humanitarian assistance.

“Maldives is a neighbour. They say that their foreign policy is India first. But you must have seen that there have been ups and downs. This has happened earlier. This has happened now also. But relations can’t break and will not break,” she asserted.

When a reporter asked Swaraj whether the inability to sign the Teesta water sharing agreement with Bangladesh was one of the government’s foreign policy failures, she didn’t agree.

“There is still one more year left (in the government’s term). Don’t call it a failure yet,” she said.

Referring to the role of the West Bengal state government, Swaraj said that the feasibility study report of the proposal was made by chief minister Mamata Banerjee to look at water-sharing of three other rivers, while keeping the contentious Teesta issue on the shelf.

On the issue of Rohingya migrants, she said that both Myanmar and Bangladesh were making efforts to ensure their repatriation.

“I am happy to hear that there has been an understanding between Bangladesh and Myanmar. As per the understanding, the repatriation would be complete within two years. They have progressed on the understanding and Myanmar has given a list of 1,222 verified individuals to be sent back. This is the first successful step and we believe honest efforts from both sides would bring a solution to Rohingya crisis,” Swaraj said.

On a misstep with Nepal

In her opening remarks at the press conference, Swaraj said that the outreach conducted by Prime Modi with the Indian diaspora was unprecedented – “ranging from Madison Garden to Janakpur”.

She was referring to the visit of the Indian prime minister to Nepal, which began in Janakpur. He had addressed a civic reception, which was attended by local dignitaries and members of the Nepali cabinet.

The characterisation of the Janakpur speech as part of outreach to the Indian diaspora led to some critical posts on Nepali social media. This was an even more sensitive issue as Janakpur is part of the Madhes region which is largely populated by Nepalis of Indian origin. Nepal government functionaries had earlier publicly accused India of backing the Madhesi movement.

After the backlash from Nepali twitterati, Swaraj tweeted an apology for the “mistake on my part”.

This was a mistake on my part. I sincerely apologise for this. pic.twitter.com/S1CpLv8uu0