Anxious to Fend Off Commonwealth Sanctions, Maldives Warms Up to Security Ties With India

“India is the most important friend of Maldives... Maldives pursues an India-first foreign policy… Maldives' security is intimately linked to the security of India”, President Abdulla Yameen told reporters in New Delhi. 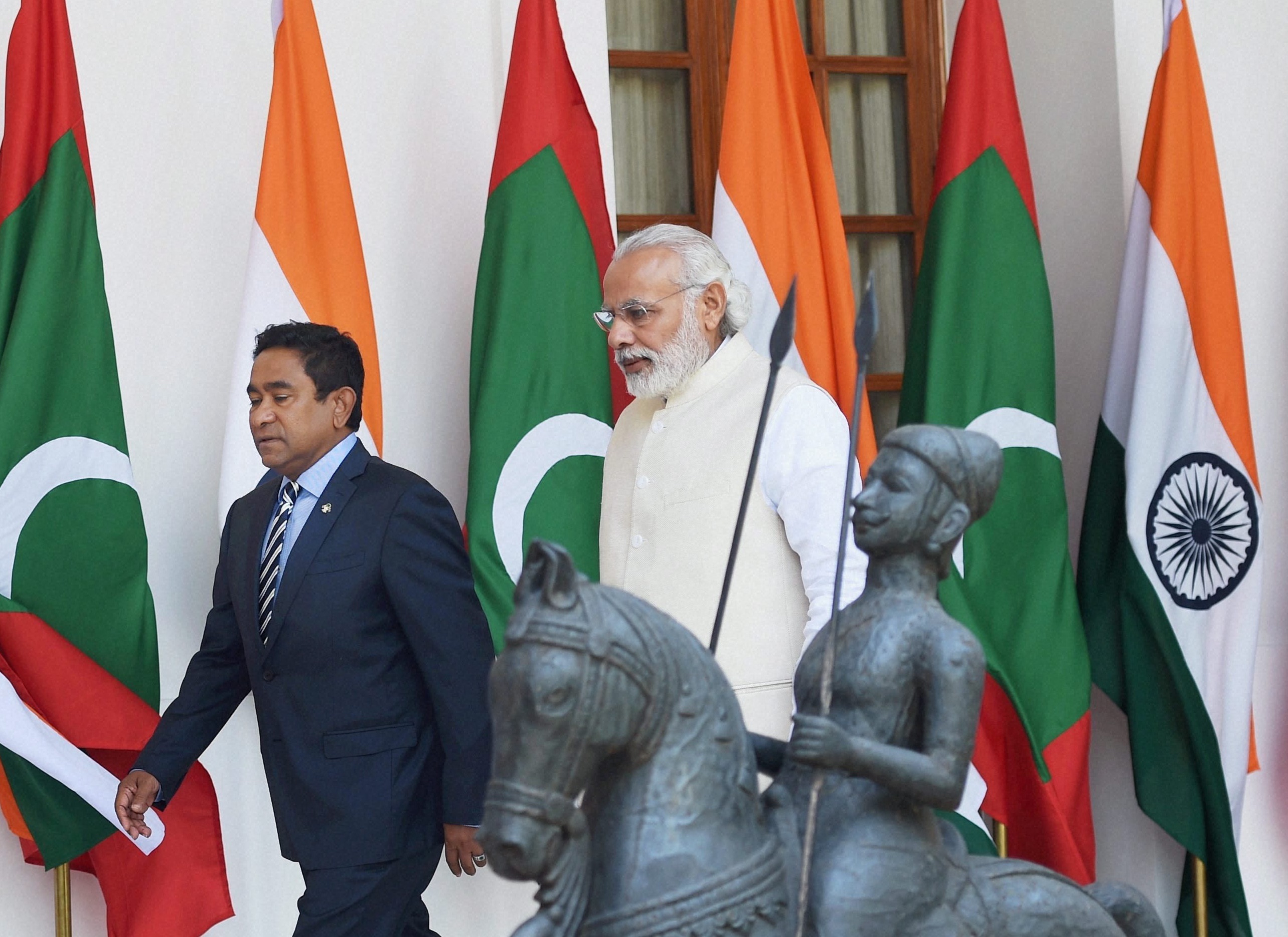 New Delhi: After reading a couple of paragraphs from his papers, Maldives President Abdulla Yameen suddenly deviated from his text at the joint appearance with Prime Minister Narendra Modi in the long hall at Hyderabad House.

“Mr Prime Minister, the reason I visited India today is to express my appreciation for the very steadfast leadership India has shown in protecting Maldives in the CMAG deliberations,” Yameen said, laying out all his cards on the table. CMAG is the Commonwealth Ministerial Action Group. “We look at India for continued support in preventing any unfair, any punitive action by CMAG on the Maldives,” he said, adding that “smaller countries are unfairly punished”.

Yameen’s unusually frank remarks were a clear indication that his government is worried about the screws being tightened at the next meeting of the Commonwealth Ministerial Action Group (CMAG).

While Yameen personally came to India to press his case, he has dispatched ministers to other CMAG members, including Pakistan and Solomon islands.

CMAG, which monitors any violation of the Harare declaration, has been keeping Maldives on the front burner for several months. At its previous meeting in February, the ministerial group spelled out a series of steps for Malé to undertake to avoid being put on the formal agenda, which is a step towards suspension or expulsion from the multilateral body.

The next CMAG meeting is in London on April 21. It will be attended by foreign secretary S. Jaishankar, who will travel directly from Moscow after taking part in the Russia-India-China ministerial meet.

The presidential visit was apparently initiated by the Maldivians – who have been in the diplomatic doghouse over imprisonment of most of the political opposition in the country and concerns about press freedom. By standing next to the leader of the largest democracy Yameen’s aim was clearly to relieve the international pressure that is building on the Indian Ocean island nation.

While Yameen was in India, the Commonwealth deputy secretary general Josephine Ojiambo was in Maldives meeting with government officials, civil society members and opposition parties.

Six bilateral agreements were signed at the end of the visit, which included a pact on the South Asia satellite, conservation of mosques, tourism cooperation, information exchange on taxes and avoidance of double taxation from income derived from international air transport.

At his joint press appearance with Modi, Yameen seemed eager to please New Delhi. “India is the most important friend of Maldives… Maldives pursues an India-first foreign policy… Maldives security is intimately linked to the security of India”.

With President Yameen being transparent about the motive for his visit, India also used the opportunity to push through its first ever formal agreement in the defence sector with Maldives – the Action Plan on Defence Cooperation.

Despite not having an agreement, the two maritime neighbours have close ties in the defence field, with annual field exercises, training of the Maldives National Defence Force and coast guard, search and rescue operations and joint surveillance of Maldives’ massive extended economic zone. India has given two advanced light helicopters to Maldives to strengthen its coastal surveillance. Around 150 Maldivian military personnel are also trained in various Indian defence institutions every year.

The action plan seeks to “institutionalise” the cooperation with meetings at the level of defence secretaries.

As Modi explained, it will include the developments of ports, training and capacity building, supply of equipment and ocean surveillance.

He specifically mentioned the development of the Uthuru Thila Falhu project – which envisages the building of coast guard berthing and dockyard facilities. India has been keeping an eye on this project for long with Sujatha Singh having visited the construction site as foreign secretary in February 2014. . India was keen to be part of the project, especially to deny space to the Chinese who have apparently also expressed their interest. Any Chinese involvement in this project would have allowed Beijing to have a foot in the door in Maldives’ defence sector – a key component in India’s Indian Ocean security policy

At the joint media appearance, Modi said India understood its role as a “net security provider” in the Indian Ocean and “is ready to protect its strategic interests in the region”.

“We are conscious of the security needs of Maldives… President Yameen agrees that Maldives will be sensitive to our strategic and security interests,” Modi added.

The prime minister sweetened Maldives’ concessions in the defence and security sector by committing to Yameen’s pet project. “iHavan’s development is a priority for Maldives. India is prepared for a partnership with Maldives for this project,” he said.

Situated on the northern-most atoll in Maldives, Ihavandhippolhu Integrated Development (iHavan) project is is envisioned as a transshipment, logistics and cruise hub in the Indian Ocean.

Located at a mere 45-minutes flight distance from the Indian mainland, iHavan had been marked out by China as a potential node in its ‘One Belt, One Road’ project as far back as August 2014.

India had been offered the iHavan project in March last year – hoping that this would be an incentive for Prime Minister Modi to visit the Maldives. It did not work. But, iHavan was first mentioned in a press note during the visit of external affairs minister Sushma Swaraj to Malé in November last year.

The other area that India was keen to have a closer working relationship with Maldives was in the area of counter-terrorism.

Maldives has been in the cross-hair of security agencies around the world due to its high per capita supply of jihadists to the civil war in Syria.

“Both President Yameen and I are aware to the danger of extremism and terrorism spreading into South Asia from afar. To meet this challenges, information exchange, training and capacity building of Maldives police and defence personnel is an essential part of our security cooperation,” Modi said.

Yameen presented his proposals to “empower” youth and women as a bulwark against radicalism and terrorism. “The youthful population in Maldives is around 65%. When we talk about economy, our economy is in fragments. We are trying to improve our economic, transform our economy to empower youth and women. We are trying to build a a city for the youth. We are trying to build shelters for the youth, trying to give hope for the restless youth. This is the only way we can redeem ourselves in this part of the world.  Otherwise, this part of the world is wide open to radicalism, to militant exercises by youth across the border,” he said.

Yameen ended his statement by returning to his mission over support at CMAG. “I have no doubt in my mind that the countries in the Commonwealth, CMAG will deliberate well in the case of Maldives,” he said.

Maldives, asserted Yameen, was looking at economic and governance reforms, and improving the rule of law. “In this context, we are seeking assistance form India. We are seeking assistance from countries like Singapore in order to improve our governance structures,” said the Maldivian president, adding that discussions were held with India on training of “magistrates and justices.”

Indian officials say New Delhi is being careful in treading a thin line to have a substantial engagement with the Maldivian government, as well as to nudge it towards more “generous accommodation” with the opposition.

India has to balance its strategy and engage with the current elected regime, so that Maldives does not go entirely into China’s lap, the officials say.

India has been quietly working behind the scenes to bring out opposition leaders, like former President Nasheed from behind bars, albeit on a temporary basis so far, they said.

“President Yameen informed me about the political and institutional reforms that are being implemented. India will be supportive of all efforts that will empower Maldives, its citizens and polity,” said Modi.

Officials asserted Modi’s phrase about ‘empowering’ Maldivian politics was an implicit reference that India will keep an eye on the pace of political reforms.