Before meeting the External Affairs Minister, the US Secretary of State met civil society participants and heard them on issues from the CAA to the harassment of inter-faith couples and the ongoing farmers’ protest.

New Delhi: Against the backdrop of concern on India’s democratic institutions failing, visiting US Secretary of State Anthony Blinken brought up the issue of the need to strengthen democratic values, while the Indian side countered that New Delhi had an obligation to correct “historical” wrongs and ensure “governance”.

This was Blinken’s first visit to India after taking over as Secretary of State. He was preceded by his cabinet colleague, Secretary of Defence Lloyd Austin, who visited New Delhi as the first representative of the Biden administration in March.

Having arrived on Tuesday night, Blinken spent less than 24 hours in India before travelling onto Kuwait.

At the meeting, which lasted around 50 minutes, each participant was given fixed time to express their views.

According to sources, the US Secretary of State heard from representatives on contentious issues ranging from the Citizenship Amendment Act to the harassment of inter-faith couples and the ongoing farmers’ protest. There were concerns expressed that the fabric of India’s constitutional framework was being frayed.

The revelations on possible surveillance of opposition politicians, journalists and civil society activists through a weapons-grade spyware tool, Pegasus – and its debilitating impact on constitutional democracy was also broached before the top US diplomat.

One of the participants at the roundtable, Khwaja Iftikhar Ahmed, president of Inter-Faith Harmony Foundation of India, told The Wire that he told Blinken that civil society is “very strong”.

“There are strong ideologies prevalent in our society – Gandhian thought, secularism and Hindutva – which belong to this country. These ideologies are not in conflict with each other, but rather in dialogue,” Ahmed said. His book, The Meeting of Minds, was launched by Rashtriya Swayamsevak Sangh (RSS) chief Mohan Bhagwat earlier this month.

Speaking to The Wire, another roundtable invitee, J.P. Singh, who identified himself as an engineer and entrepreneur, said that he was likely invited in his capacity as a Leadership fellow of the US department of state. “I spoke about technology transfer and on the best practices in climate change, healthcare and agriculture that we can learn from each other. I also raised how we can increase the per capita yield of farmers and strengthen our agriculture economy,” Singh said when asked if the issue of farmers was raised at the discussion. 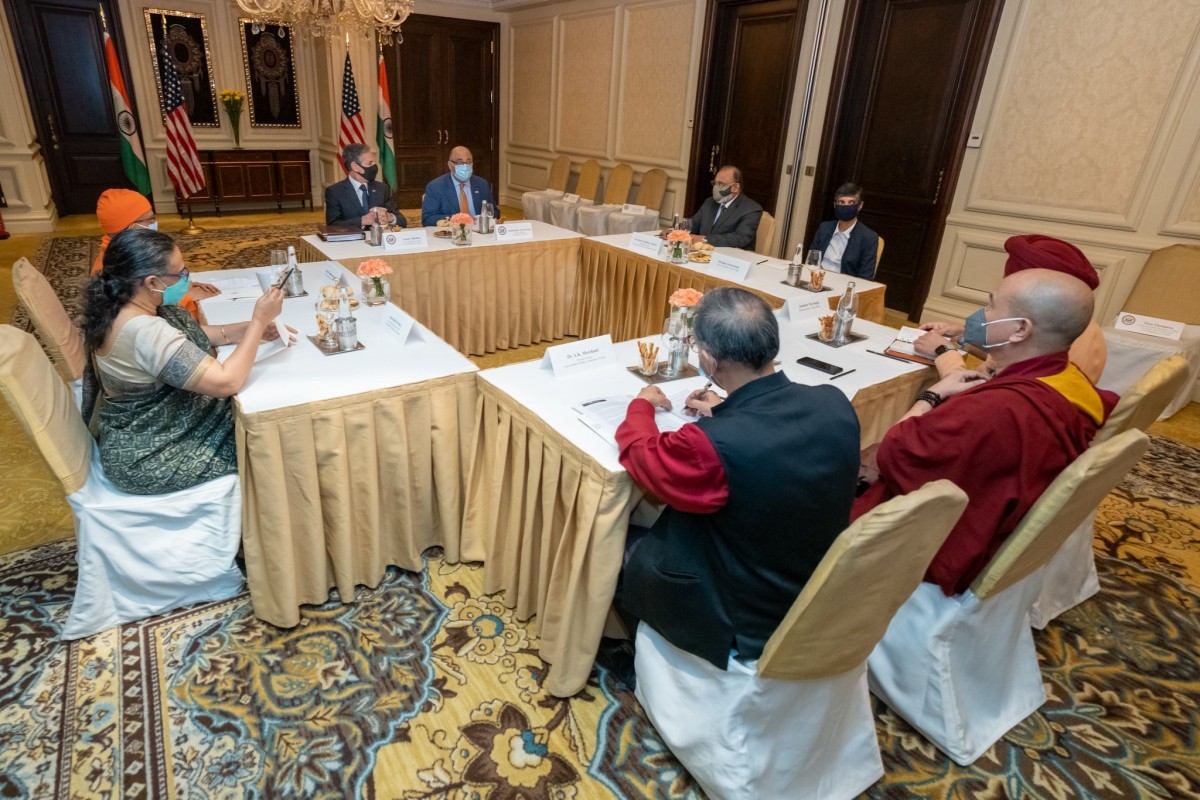 Incidentally, the director of the Tibet House in Delhi, Geshe Dorjee Damdul, was also present at the civil society roundtable. The head of the Dalai Lama’s cultural centre reportedly raised issues related to the Chinese side having no space for dialogue.

The Tibet issue was clearly a top priority for the Americans, with Blinken having a short, separate meeting with Ngodup Dongchung, who serves as the Tibetan spiritual leader’s representative in the Indian capital.

Blinken’s meeting with Dongchung is the highest level of contact between the US administration and Tibetan officials since the Dalai Lama’s meeting with US President Barack Obama in 2016.

With the Biden administration continuing its confrontationist stance vis-à-vis China, Washington has been more visible in taking proactive, visible steps on Tibet that could rile Beijing. The Chinese government views the Dalai Lama as the head of the Tibetan separatist movement and has banned all his imagery inside Tibet.

Last November, the then head of the Tibetan government-in-exile, Lobsang Sangay, visited the White House. The US Congress also passed a Tibet policy and Support Act in December, which backed the right of Tibetans to choose the successor of the Dalai Lama.

In his opening remarks at the civil society roundtable, Blinken said that at a time of rising threat to global democracy, it was vital that the two world’s leading democracies support fundamental freedoms.

“We believe that all people deserve to have a voice in their government and be treated with respect no matter who they are.  These are fundamental tenets of democracies like ours, and our purpose is to give real meaning to these words and constantly renew our commitment to these ideals,” he said. At the joint press conference after talks with Minister of External Affairs S. Jaishankar, Blinken indicated that shared democratic values were “very much part of the conversation today as they usually are” with his Indian interlocutors.

With the testimony of Capitol Hill police officers on the January 6 assault still fresh, Blinken stated that there are moments when the challenges to democratic polities “can be painful, can even be ugly, but as democracies, we deal with it openly”.

“Like our own, India’s democracy is powered by its free-thinking citizens. We applaud that. We view Indian democracy as a force for good in defence of free and open Indo-Pacific and indeed, a free and open world”.

In his answer to a question about India’s human rights records, Blinken took pains in choosing his words. “We also recognise that every democracy starting with our own is a work in progress, and when we discussed these issues, I certainly do it from [a] starting point of humility,” he said.

He stated that one of the key elements that Americans admire about India is the steadfast commitment to democracy, which is “in part why our shared values strengthen the relationship”.

His Indian host, Jaishankar, also acknowledged that shared democratic values were certainly part of the agenda.

Jaishankar countered with three points and attempted to give a conceptual defence of India’s moves which have attracted international criticism – from the CAA to internet shutdowns to the situation in Kashmir.

“One, that the quest for a more perfect union applies as much to the Indian democracy as it does to the American one – indeed, to all democracies. Number two, that it is the moral obligation of all – of all polities to right wrongs when they have been done, including historically. And many of the decisions and policies you’ve seen in the last few years fall in that category. And third, that freedoms are important, we value them, but never equate freedom with non-governance or lack of governance or poor governance. They are two completely different things,” he said.

India has traditionally defended the dilution of Article 370 of the constitution that delineated Jammu and Kashmir’s autonomy and the Citizenship Amendment Act as efforts to amend historical legacy problems.

In an interview with CNN-News 18, Blinken specifically flagged US concerns about restrictions on the internet, where India has been trying to come down heavily on social media companies, like Twitter and Facebook.

“One such challenge is in cyberspace and the space of the internet, and the distinction between regulating misinformation in cyberspace, versus political speech; it’s a thin line. We have to look at them carefully. We come from the same place; societies that are animated by democratic ideals and very vibrant democracies. It’s good for us that we get to speak about it in an open space,” said the US Secretary of State. Prime Minister Narendra Modi with US Secretary of State Antony Blinken during their meeting in New Delhi. Photo: PTI

The US state department’s readout of Blinken’s meeting with Modi stated that they had discussions on “COVID-19 response efforts, climate change, shared values and democratic principles, and regional security, including through US-Australia-India-Japan Quad consultations”.

According to the Indian press note, Modi conveyed to the US visitor that “societies of US and India share a deep commitment to the values of democracy, freedom and liberty”.

In Beijing, the Chinese foreign ministry spokesperson Zhao Lijian responded to Blinken’s spotlight on common democratic values with India by stating that democracy was “not a patent owned by any country”.

“Which country is a democracy and which an autocracy should not be determined by a very small number of countries. Debasing others while elevating oneself in itself is not democratic at all,” he said.

A large part of the formal discussions in New Delhi also ranged around Afghanistan, with US troops slated to withdraw from the war-ravaged country by August 31.

Stating that peace negotiations have to be taken seriously by all parties, Jaishankar reiterated that “unilateral imposition of will by any party will obviously not be democratic and can never lead to stability, nor indeed can such efforts ever acquire legitimacy”.

Blinken added that if the Taliban attempts to take control by force, it will turn the country into a “pariah state”. He stated that reports about atrocities committed by Taliban in areas under its control were “deeply troubling”.

“The Taliban says that it seeks international recognition, that it wants international support for Afghanistan. Presumably it wants its leaders to be able to travel freely in the world, sanctions lifted, et cetera. Well, the – taking over the country by force and abusing the rights of its people is not the path to achieve those objectives,” he said.