A.K. Abdul Momen had earlier said that Amit Shah's comments in parliament about minorities in Bangladesh were false. New Delhi: After India passed the contentious Citizenship (Amendment) Bill, 2019 on Wednesday, Bangladesh foreign minister A.K. Abdul Momen said that allegations made by the Indian home minister in parliament about the repression of minorities were inaccurate. Less than 24 hours later, he cancelled his trip to New Delhi.

Bangladesh claimed that the visit was dropped as it clashed with December 16, or Victory Day. Indian government asserted that any speculation to link the cancellation to CAB was “unwarranted”.

On Wednesday night, India’s Upper House of parliament, the Rajya Sabha, passed a legislation that will for the first time introduce a religious criteria for citizenship.

In possibly the first major diplomatic fallout from the passage of the legislation, Momen has cancelled his visit to Delhi at the last hour on Thursday.

Just a day earlier, the Indian Ministry of External Affairs had announced the travel itinerary of the Bangladeshi minister. He was scheduled to arrive on Thursday evening, attend the ministerial keynote session of Delhi Dialogue and Indian Ocean Dialogue on Friday and then hold a breakfast meeting with external affairs minister S. Jaishankar on Saturday morning.

However, just hours before his arrival in India, the Bangladesh high commission confirmed that the foreign minister has cancelled his visit.

News agency ANI reported that Momen has claimed that the cancellation was done as his junior minister and foreign secretary were both out of the country.

Bangladesh Foreign Minister AK Abdul Momen: Given increasing demand at home, I have decided to cancel the visit. However, I am looking forward to attending the next meeting in January. I am sending our DG to attend the event. https://t.co/A0uHXuU73u

The argument is a bit difficult to accept as it is highly unlikely that both these senior Bangladeshi officials left the country in an emergency after India had made the announcement of Momen’s visit. The Bangladesh foreign secretary is leading the delegation to the oral hearings at The Hague of the case brought against Myanmar over the exodus of Rohingya refugees.

Later, the Bangladesh high commission in New Delhi issued a press release that the visit had to cancelled due “some sudden pressing national events at home”. “…[H]e has to participate in two important national events – the observance of Martyred Intellectuals Day on December 14 and the Victory Day on December 16. The events coincide with his planned visit to India,” said the press note.

Since these days are of national importance, it is highly unlikely that the Bangladesh foreign minister’s scheduler would not have taken these days into account when confirming the India visit.

On Thursday night, Bangladesh home minister Asaduzzaman Khan Kamal also cancelled his private visit to Meghalaya, with Shillong also erupting in anti-CAB protests. Kamal told Indian TV channel Times Now that he had been advised by foreign office to avoid Meghalaya due to the disturbances.

The cancellation, of the Bangladesh foreign minister’s trip, of course, has occurred in the backdrop of critical statements from Dhaka on the Citizenship (Amendment) Bill.

As per agency reports, Momen termed “untrue the allegations of minority repression in Bangladesh by Home Minister Amit Shah, saying whoever gave them the information, it is not correct”.

Momen further told Dhaka Tribune that Shah should stay in Bangladesh for a few months to check the state of communal harmony.

“What they are saying in regard to torture on Hindus is unwarranted as well as untrue…There are a very few countries in the world where communal harmony is as good as in Bangladesh. We have no minorities. We are all equal. If he [Amit Shah] stayed in Bangladesh for a few months, he would see the exemplary communal harmony in our country,” he added.

The Bangladesh minister said that his country was concerned with the matter if it would change the countries’ relationship. “They (India) have many problems within their country. Let them fight among themselves. That does not bother us. As a friendly country, we hope that India will not do something that affects our friendly relationship,” he said.

He also informed Dhaka Tribune that after studying it “minutely”, Bangladesh may take “this matter up with them”.

The foreign minister said the government in Bangladesh does not judge anybody based on his or her religion but sees as citizen of Bangladesh.

Momen claimed that Bangladesh ensures that followers of all faiths enjoy the same rights in every area, including the job sector.

“Many important decisions of our country are taken by persons belonging to different religions. We never judge anybody by their religion, we treat all as Bangladesh citizens,” he said. 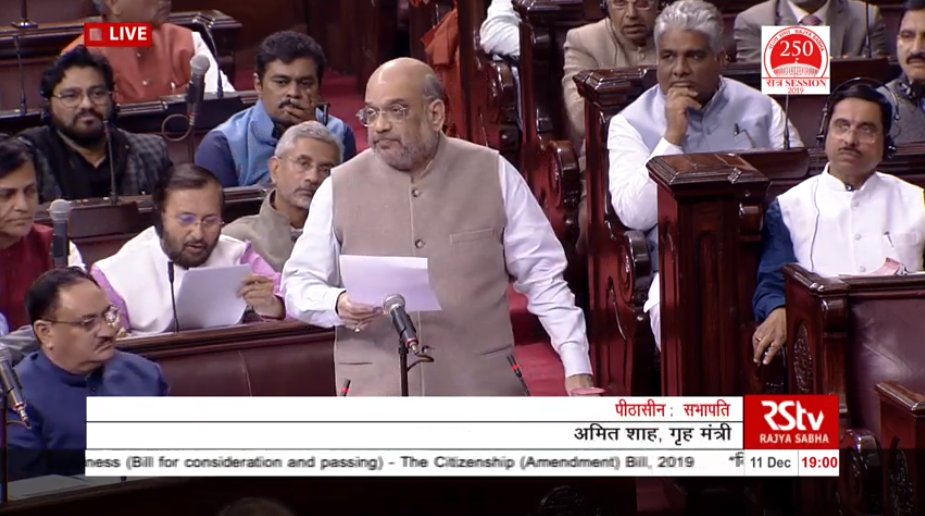 Indian foreign minister S. Jaishankar sitting behind Amit Shah as he made claims about minorities in Bangladesh. Photo: RSTV screengrab

According to Bangladeshi news agency UNB, foreign minister Momen was speaking to reporters after meeting with US ambassador Earl R. Miller and Japanese envoy Naoki Ito.

“In our country, religious harmony is at a very high level. No one from other religions is oppressed here. We have respect for all religions. We see those (minorities) in equal eyes and as the citizens of Bangladesh,” he said.

The Indian home minister had claimed in parliament that the Bill had been brought to give citizenship to persecuted minorities in Afghanistan, Bangladesh and Pakistan. The legislation allows for members of six religions from these three countries to apply for citizenship, but not Muslims – which leaves out persecuted minorities like Hazaras and Ahmaddiyas.

Momen said many Bangladeshis are returning to their homes as the country is marching towards development.

The Bangladeshi foreign minister stated that the two countries were enjoying a “golden chapter” of bilateral ties and “so, naturally our people expect that India won’t do anything that could create anxiety among them”.

He also warned that any deviation from India’s position as a secular nation would weaken these ties. “India is historically a tolerant country which believes in secularism [but] their historic position will be weakened if they deviate from that.”

Bangladesh had till now been rather cautious about making comments about the citizenship Bill or the earlier National Register for Citizens process in Assam.

On the Bangladeshi foreign minister’s words, MEA spokesperson Raveesh Kumar said that there was “some confusion”. “We have explained that religious persecution is not happening under the present government. The migrants were repressed during the military rule and the previous governments in Bangladesh, as explained by the home minister,” he added.

Kumar said that the Indian government has “acknowledged that the present (Bangladesh) government have taken substantial steps to address concerns of minorities as per their constitutional provisions and laws of their country”.

The MEA spokesperson then quoted from home minister Amit Shah’s speech in parliament where he apparently highlighted the role of Sheikh Mujibur Rehman and the steps taken by Sheikh Hasina government.

The bill allows citizenship for Hindus, Sikhs, Buddhists, Jains, Parsis and Christians from Afghanistan, Bangladesh and Pakistan, who have arrived in India on or before December 31, 2014.

Even as the government has praised Dhaka for taking steps to protect minorities, the bill clearly allows for non-muslim migrant from Bangladesh to take citizenship if they had arrived before 2014 and claimed prosecution. Sheikh Hasina has been in power since January 2009.

However, on the foreign minister’s cancellation, Kumar asserted that it was a separate matter and the explanation conveyed by Dhaka should be accepted.

“Any speculation that this development is connected with legislation adopted by Parliament yesterday regarding the Citizenship (Amendment) Bill is unwarranted,” he said.

There have been unwarranted speculations on postponement of visit by Bangladesh Foreign Minister Dr. Abdul Momen to India. We have been informed by Bangladeshi side that change in programme was due to domestic issues related to commemoration of Bangladesh ‘Victory Day’ on Dec 16.

UNB reported that Momen was asked whether the United States envoy had expressed his opinion about the Indian legislation.

“They (US) are being critical about that. They believe that India weakened its position by doing it (passing the Bill),” he revealed.

The US administration has not commented so far after the passage of this legislation. However, US state department officials had been critical about the proposal at a US Congressional hearing in October.

The federal US commission on International Religious Freedom has urged the US government to impose sanctions against home minister Amit Shah and other principal Indian leadership, if the Bill was passed. The Ministry of External Affairs had lashed out that the USCIRF, saying it had no locus standi in the matter and its comments were unwarranted.

The US House Foreign Affairs committee had also expressed grave reservations on the bill. The Indian foreign ministry spokesperson said that India had reached out to the members of the house and other stakeholders to put forth New Delhi’s perspective.

Similarly, Indian missions across the world have been sensitised to be ready to explain the government’s position on the Citizenship (Amendment) Bill.

He said that BNP was against “Amit Shah’s irresponsible comments”. “We strongly condemn it, and call upon him to withdraw his baseless allegation,” said the BNP leader.