Ahead of Talks With China, Top Indian Sources Warn Ladakh Stand-Off Can 'Take any Trajectory'

"The sense we got from the defence ministers’ meet was that the Chinese don't want a war. We have asked for another round of corps commander-level talks... But we are fully prepared if things don't work out." 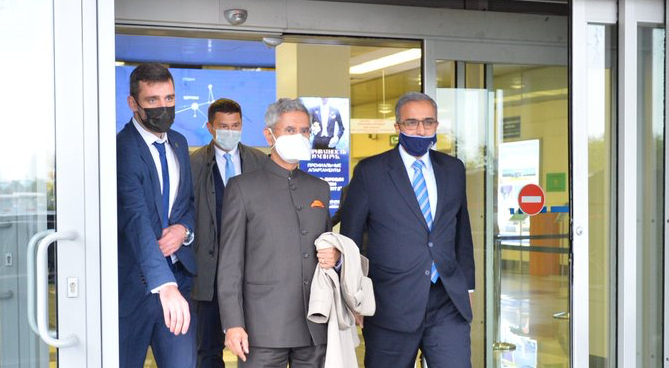 New Delhi: Ahead of the the first face-to-face meeting between the Indian and Chinese foreign ministers since the build-up of border tensions in Ladakh began in April, top government sources here said on Wednesday that talks with China continued to be critical in resolving the situation at the border, but added that the current stand-off could “take any trajectory”.

On Wednesday, external affairs minister S. Jaishankar reached Moscow to attend the meeting of the council of foreign ministers of the Shanghai Cooperation Organisation, scheduled for Thursday.

He will hold a separate bilateral meeting with China’s state councillor and foreign minister Wang Yi in the latter half of the day. It will be held after a luncheon meeting between the foreign ministers of Russia, India and China.

Last week, the Indian and Chinese defence ministers had met on the sidelines of another SCO meeting in Moscow. While that meeting ended with both sides stressing the need to find a peaceful resolution, tensions again spiked after shots were fired at the Line of Actual Control on September 7.

The India Army and the Chinese PLA blamed each other for firing the first warning shots, but it was clear that the taboo on using firearms at the border had been broken after four decades.

In New Delhi, top government sources, quoted by various media channels, said that they wanted the Jaishankar-Wang Yi talks to be successful, but were also being realistic after the defence ministers’ meeting failed to lead to any change on the ground.

“We want talks to succeed. After Galwan (clashes) and before the August 29 aggression, we were confident that talks would succeed. The sense we got from the defence ministers’ meet was that the Chinese don’t want a war. We have asked for another round of corps commander-level talks. They have agreed. But we are fully prepared if things don’t work out,”  TV18 quoted “top sources” as saying.

While the stand-off began in early May with multiple points of friction in eastern Ladakh, it took a serious turn after the violent face-off at Galwan valley on June 15, which left 20 Indian soldiers dead. There has been no acknowledgment of casualties by the Chinese side.

After multiple rounds of talks at the political and military level, Indian officials indicated that the disengagement process had reached a dead-end, with the Chinese not agreeing to go back to their positions in April.

On August 29 and August 31, India claimed that around 200 Chinese soldiers had crossed the LAC and attempted to take dominating heights at Pangong Tso’s southern bank. This led to India “readjusting” its position and taking more of the heights on its side at Mukhpari, Gurung Hill, Magar Hill, Rezang La and Richi. China had accused India of crossing the LAC at two points on August 31.

The latest incident on September 7 adds a dangerous layer to the current stand-off, as shots have not been fired along the un-demarcated long border since 1975.

India has repeatedly stressed that frontline troops are well aware of the alignment of the Line of Actual Control in the area and have not transgressed into Chinese territory.

China, however, claims that Indian commanders admitted to their Chinese counterparts that they had crossed the LAC. “The fact is in the negotiations between the two sides on the ground, the Indian side admitted that Indian troops had transgressed the LAC and fired the shots and promised not to fire shots again,” a Chinese source said, speaking on condition of anonymity. But the source provided no corroborating information on who had made this “admission” and on what date.

Indeed, China’s official on-record statements – either from the Chinese foreign or defence ministries – have not made any such claim.

As per Indian defence sources, the last brigade commander-level meeting between the Indian and Chinese side took place last Thursday, but it was part of the regular ground level talks to look at the implementation of the dis-engagement and de-escalation process. “Both sides agreed to hold another round of corps commanders talks for which the date is yet to be finalised,” they said.

There is a severe trust deficit, with India repeatedly calling for the “sincere” implementation of the dis-engagement plan.

“You just cannot trust the Chinese. On the morning of the 29th, the Chinese commander in Chushul had spoken to his Indian counterpart about following established protocol and not doing any movement at night. And yet, the same night, he moved his men towards our posts,” said a top Indian government source.

The Indian side is clear that the direction of the current stand-off is being dictated from Beijing, rather than by “exuberant” local military commanders.

While the situation remains tense, Indian sources say that matters have still not reached a point of no return. “It is difficult to predict the trajectory of the face-off, but we haven’t reached the threshold of war. Things do build up to a full-blown conflict, but so far there have been only pinpricks. The Chinese deployment right now is non-tactical”.

NDTV reported that the Indian army has managed to secure heights along Finger 4 on the north bank of Pangong lake in last few days, which overlook the Chinese troops. The two sides are separated by a few hundred metres at Finger 4.

At the the southern banks of Pangong lake, top government forces added that Indian troops have been given robust rules of engagement to respond with “deadly force” in case Chinese infantry soldiers attempted to close in on their position, according to NDTV.