Songs, which have occupied a prominent place in the anti-CAA protest movements, draw from a tradition whose history can be traced back to the late anti-colonial period. 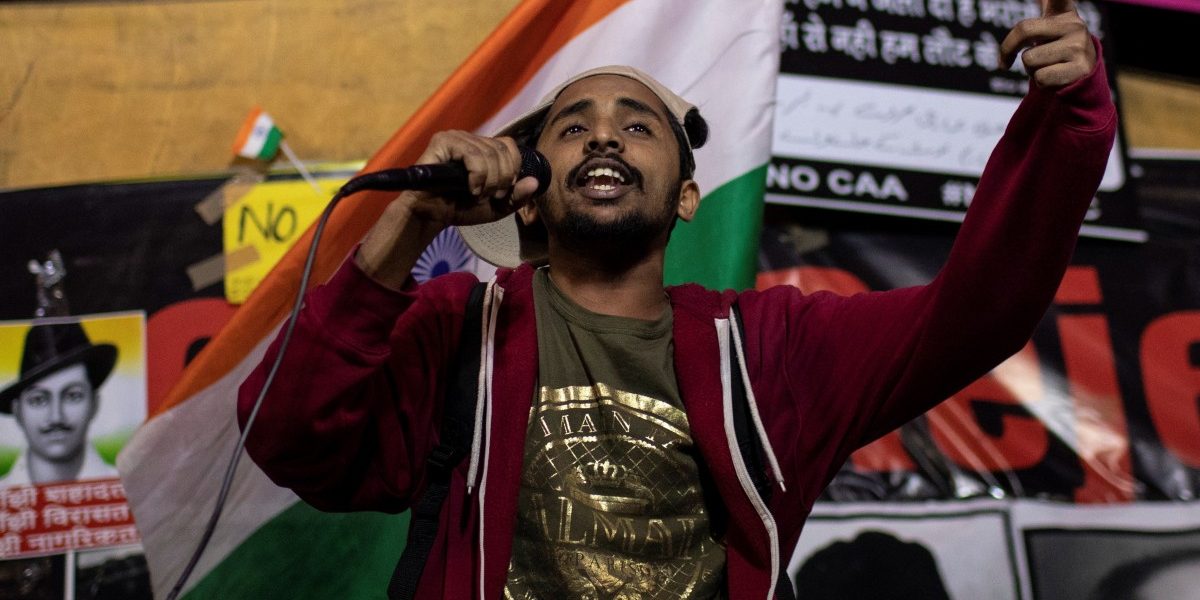 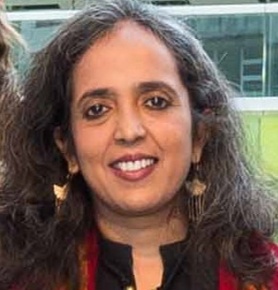 Ever since December 15, 2019, when anti-Citizenship (Amendment) Act (CAA) protests started in full swing, several images captured the imagination of artists across media. For instance, that of a woman student wagging her forefinger in warning to a policeman who lathi charging students of Jamia Millia Islamia (JMI) University, or another protesting woman student handing a rose to a policeman. From murals and street-art to poetry and songs, voices burst through with artistic expression.

Songs have especially occupied a prominent place. Exploding in number as well as the forms of songs sung, it was as if a massive wave of pent up energy was unleashed through the music performed at venues and events across the country. Where were these songs coming from? It’s interesting to see how some musical genres previously sung as protest music in recent decades in India were reflected in the music at these protest venues. 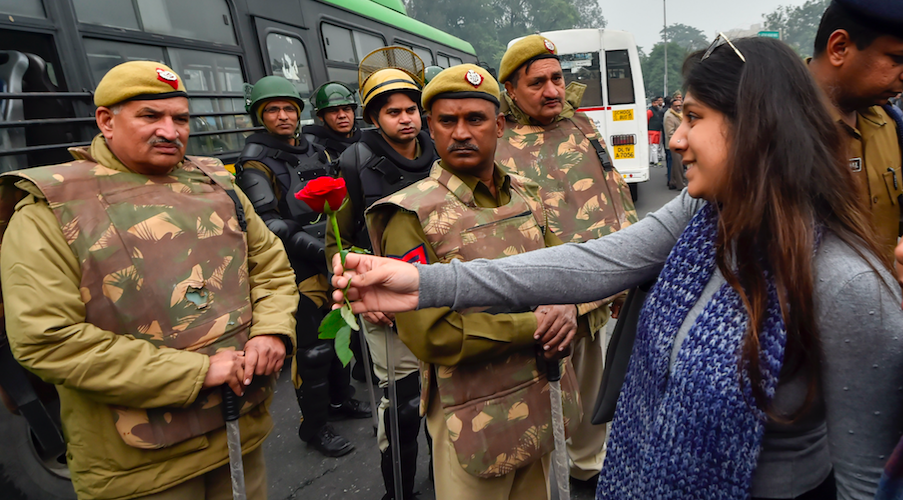 A protestor offers a rose to police personnel during a demonstration against the Citizenship (Amendment) Act, at Mandi House, in New Delhi. Photo: PTI

(We had fought against the British, who is this desi White Man
Azadi is our dream, this rose is the revolution)

Composing topical songs since 2005, the group considers itself part of the lokshahir tradition in Maharashtra, which emerged as the ‘people’s’ version of an old shahiri tradition. The shahirs were medieval poet-singers who travelled across the Marathi-speaking regions, singing ballads called powadas about heroism, where dramatic episodes were related through rhythmic meter, and familiar refrains would be combined with colloquial speech-song.

Also Read: Moushumi Bhowmik, on the Subtle Art and Politics of Choosing Songs for Protests

Lokshahirs, or people’s poets, like Amar Sheikh, Annabhau Sathe and D.N. Gavankar, who blazed the trail in pre-Independent India, explicitly brought the idea of the ‘people’ or ‘lok’ into the shahiri tradition. This breed of firebrand poet-singers – mostly from the Mahar and Mang communities – lent their voices to the independence movement, allied with communists in movements for social transformation and also later to several socio-political movements such as the ones for the linguistic rights for Maharashtrians and the ‘Free Goa’ Movement.

In more contemporary times, Sambhaji Bhagat, Sachin Mali and Sheetal Sathe have emerged as very important lokshahirs who perform music around themes of caste oppression, labour and work, the state and repression. Bhagat, a Dalit singer who associated with what he refers to as Marxist-Ambedkarite politics, emerged as a major lokshahir in Maharashtra in the 1980s.

Sung in Hindi, about those in power who, according to Bhagat’s song, are ‘setter’ (fixers) and ‘chor-chitter’ (thieves), warning people that their oppressors (zaalim) will not be overpowered if they do not call them out. The oppressors could be varied (politicians, people belonging to the upper castes, the police) depending on where the songs are being performed and how audiences interpret it.

The controversy surrounding the song, ‘Hum Dekhenge’ in India, written by Pakistan’s popular poet Faiz Ahmad Faiz, threw up questions around the interpretation of ostensibly religious symbols by poets and musicians, as well as their role in inter-community relations.

No sooner had the song been declared ‘anti-Hindu’ by those who complained about it being sung in protest venues in India, its popularity rose multifold. It was translated into several Indian languages, and sung with greater vigour across the country. Along with Habib Jalib’s poem ‘Dastur’, with its powerful lines ‘Aise Dastur Ko, Subhe Benoor Ko, Main Nahin Maanta, Main Nahin Maanta’ (Such a practice, such a lightless dawn, I do not accept), the ‘tradition’ of the Urdu ghazal, or nazm, came to be disseminated to parts of India that traditionally didn’t engage with the genres in any significant way. Again, this was not new, but continuing with a trend that had a history from the late anti-colonial period, of interpreting long-standing traditions. 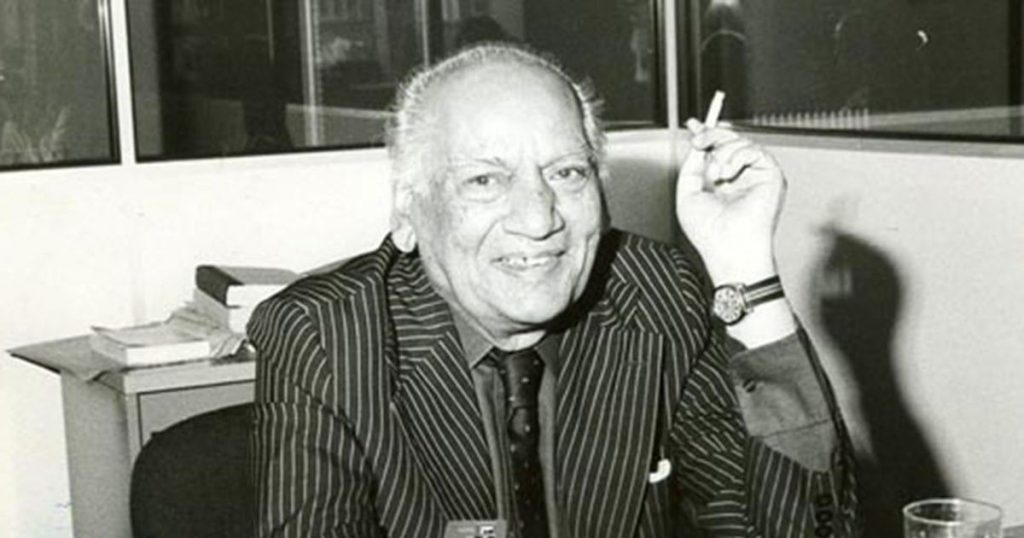 In the more recent past, after Babri Masjid’s demolition in 1992, with communal politics and tensions at their apogee, a number of musicians and artistes discussed the various kinds of music capable of addressing questions that the political situation in the country had thrown up. At the heart of the communal situation were issues of tradition, heritage, nationalism, religion, tolerance and citizenship.

From the 1990s onwards, the enquiry into questions of heritage, tolerance and rebellion led musicians to begin studying and performing repertoires that were excavated from the past, often from centuries before. Along with this, there was also a revisiting of the poetry of poets like Faiz, Jalib and others in both India and Pakistan as of Rabindranath Tagore and Kazi Nazrul Islam in India and Bangladesh. A vast corpus of such music came to address and re-constellate questions of nation, identity and politics in a refreshing manner, challenging right-wing cultural assertions frontally, and also shaping popular music-listening cultures in the three countries of the subcontinent through providing contemporary interpretations.

For Shubha Mudgal – a consummate classical musician and a key figure in the excavation and reconfiguration of ‘traditional’ forms – for example, this exercise has produced a vast repertoire of songs from medieval mystic texts. This includes the Vaishnava Pushti-Marg poets, Malik Mohammed Jayasi’s Padmavat, Meerabai and Tulsidas, Nirguna poetry of Kabir and Namdev, Sufi poetry from Amir Khusrau and also from the 1857 Mutiny and Faiz. Similarly, Madan Gopal Singh, one of the first and most prominent musicians responsible for contemporising Sufi music, has excavated and sung the poetry of Shah Husain, Sultan Bahu and Bulle Shah extensively as part of his search for the lineages of the contemporary.

Importantly, such interventions brought back into focus the idea of the ‘usable past’ in understanding the culture of India. It presented the possibility that the singing of Bhakti or Sufi music might not be necessarily related/limited to a belief in the Almighty, but that both positions were possible given the multilayered nature of art and religion in India. These musical explorations opened up a new discourse on the relationship to tradition that did not hinge on the belief in God or adherence to ritual.

Not only have we seen a continuation of musical tradition as a means of protest, but in the last two decades, there has been a proliferation of bands and individuals that have used rap music to point attention to political issues in different parts of the country as well. However, a look into that can be deferred to another piece.

The article is a part of Saha Sutra and the Pune Cultural Mapping Project on www.sahapedia.org, the digital library of Indian culture.

Sumangala Damodaran, an academician and musician, is professor of economics, School of Development Studies at Dr B.R. Ambedkar University. She is an authority on the history of protest music, with a particular focus on music in the tradition of the IPTA.