Why Bollywood Could Stand To Be a Bit More Like Hollywood

While many in the Indian film industry have unabashedly borrowed themes, scripts and plots from their American counterparts, they have failed to emulate Hollywood’s ability to speak truth to power. 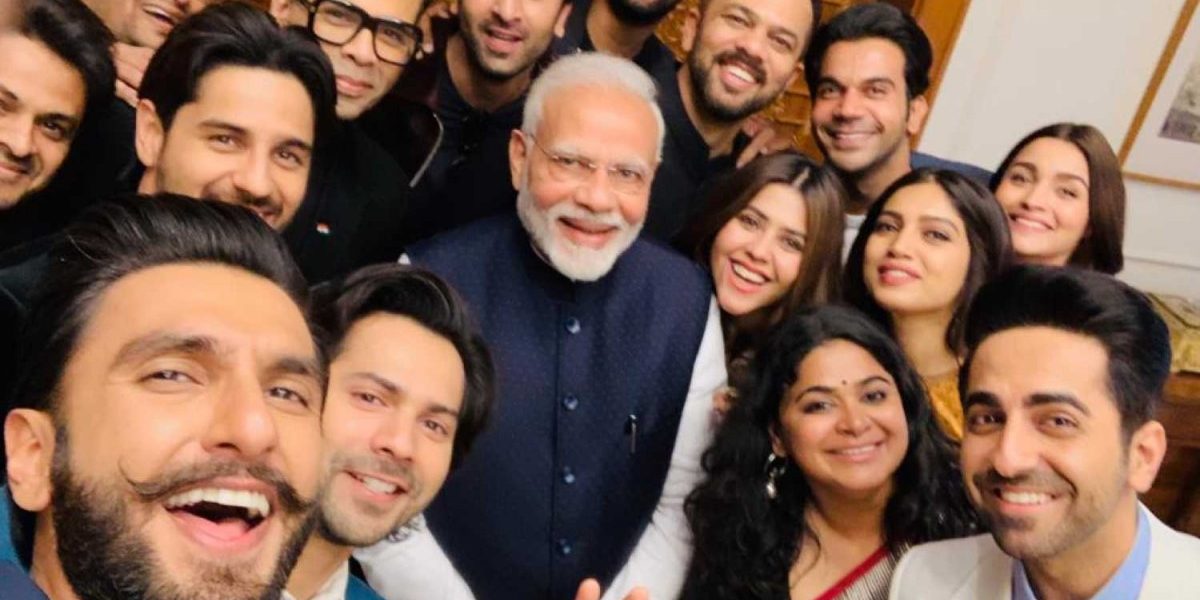 The heroism, courage and outspokenness of the great majority of Bollywood actors continues to remain restricted to the movie screen. Credit: Instagram/karanjohar

It’s being called the ‘Selfie of the Year’ even though the year has barely begun – Prime Minister Narendra Modi beaming joyously, surrounded by Bollywood personalities like Karan Johar, Ranveer Singh, Ranbir Kapoor, Ekta Kapoor, Varun Dhawan and several others. On January 10, 2019, a clutch of actors and filmmakers flew from Mumbai to Delhi to meet the prime minister and discuss how they can work towards “nation building”.

Mainstream media, however, wasn’t the only one to gush about the meeting. Film producer Johar also waxed eloquent on his Instagram account:

‘Powerful and timely conversations can bring about change… Meeting the Honorable Prime Minister Narendra Modi today was an incredible opportunity. As a community, there is a huge interest to contribute to nation building. There is so much that we want to do…When the youngest country (in demography) joins hands with the largest movie industry in the world, we hope to be a force to reckon with. Together we would love to inspire and ignite positive changes to a transformative India.’

Imagine for a moment Meryl Streep, George Clooney, Anne Hathaway and Michael Moore grinning from ear to ear and huddled around Donald Trump for a selfie – or ‘groupfie’ as it is inelegantly called – and then proudly posting it on social media for all to see. It is difficult to visualise, mainly because Hollywood has been far more vocal, outspoken and blunt in its criticism of the government than Bollywood can possibly dream of being at the moment.

While many in the Indian film industry have unabashedly borrowed themes, scripts and plots from their American counterparts, they have profoundly failed to emulate the one thing they should have – Hollywood’s ability to speak truth to power.

Consider what various Hollywood stars have said about Trump and his policies:

In June 2018, George and Amal Clooney announced they were donating $100,000 to the Young Center for Immigrant Children’s Rights. In an interview to the Hollywood Reporter, they said, “At some point in the future our children will ask us: ‘Is it true, did our country really take babies from their parents and put them in detention centers?’ And when we answer yes, they’ll ask us what we did about it.”

Actor Kristen Bell urged her fans to call their governors to sign an executive order denying state resources in support of Trump’s immigration policy and Mia Farrow took to Twitter to say: “We need laws to govern a tyrannical president.”

Actor Mark Hamill, who played Luke Skywalker in Star Wars film series, tweeted – amongst other things – a political cartoon of children in cages. There is something inspiring about watching one of your childhood movie heroes fight for freedom and justice in real life as well. The Jedi knight who was part of the Resistance in the world of stormtroopers, X-wing fighters and the Death Star way back in 1977, continues to be a part of the resistance against Donald Trump in 2019.

The heroism, courage and outspokenness of the great majority of Bollywood actors, however, continues to remain restricted to the movie screen. The same stars who fight corrupt and powerful politicians in films ingratiate themselves to the politically powerful in real life, and when a member of their own fraternity, a respected veteran like Naseeruddin Shah, speaks out against the growing communal divide in India, he is immediately castigated by one of his colleagues who asks him, “How much more freedom do you want?”

Instead of expressing their great interest in “nation building” – whatever that means – perhaps Karan Johar and his colleagues would do well to focus instead on the more immediate task of “nation preserving” and lend their voices to the cause of protecting and preserving the institutions that have brought India as far as they have.

Surely Johar and co. are aware of the systematic damage being done to democratic, economic, social, educational and judicial institutions across India. Surely they are aware of the plight of farmers, attacks on journalists, mob lynchings, the dangerous levels of unemployment and the fires of communalism and casteism that are being deliberately stoked around the country. Why then, one wonders, are they so silent on the burning issues of the day?

In his powerful book Looking Away, former IAS officer and author and activist Harsh Mander describes the huge disconnect between much of Bollywood and many of the big issues plaguing India:

“Popular theatre, cinema and film music used to celebrate ideas of equality. Many Hindi films were populated with farmers fighting for their land, factory workers for proletariat rights, and homeless people for dignity and housing. Nargis playing the matriarch bravely battling famine, flood and an evil moneylender in Mother India (1957), Balraj Sahni playing the farmer pulling a hand rickshaw on the streets of Calcutta in a desperate bid to save his agricultural land in Do Bigha Zameen (1953) and Raj Kapoor in the role of a Bombay footpath dweller in Shree 420 (1955)”

Mander then goes on to lament the fact that times have now changed. Barring a few exceptions, “If you were receiving an introduction to India through the movies being made in Hindi today, you would imagine that there are no poor people left in the country. Everyone is impossibly rich, living in designer clothes and homes; the indebted peasant, the wage worker, the street dweller have been exiled from our popular cinema.”

Arundhati Roy expresses the same sentiment in a slightly different way. In her scathing essay Listening to Grasshoppers, she says:

“The most successful secessionist struggle ever waged in India has been the secession of the middle and upper classes to a country of their own, somewhere in the stratosphere where they merge with the rest of the world’s elite’.”

Declarations of their desire to ‘inspire and ignite positive changes to a transformative India’ notwithstanding, our movie stars now seem to have become a part of that ‘country of their own, somewhere in the stratosphere’. And, having successfully ‘merged with the world’s elite’, they have no compunctions in publicly aligning with a prime minister who, in turn, has no qualms whatsoever in using the institutions of democracy for his own ends.