Who is the Mata in Bharat Mata?

Is Mata associated with particular cultures and religions or is Mata a secular conception, making it possible for people of diverse religions, who call themselves Indian, to pay obeisance to the nation as motherland? 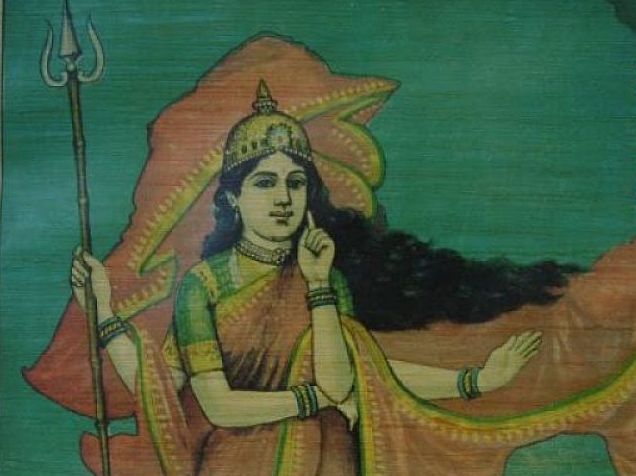 A dinner conversation with a Muslim couple, who are good friends, turned to the current debate of whether all citizens of India ought to proclaim ‘Bharat Mata ki jai‘. They were upset about the pressure on Muslims to say ‘Victory to Bharat Mata’. We spoke about the contribution of scholars of Deoband and several other Muslims to the Indian freedom struggle. Maulana Husain Ahmad Madani (1879 – 1957) always wore khadi, as Barbara Metcalf has demonstrated in her finely drawn portrait of the Muslim nationalist leader. Patriotism should come spontaneously, it cannot be forced, stated our friend, “When we were children we would cry when we heard patriotic songs.” We both recalled Lata Mangeshkar’s powerful rendition of the song, “Ai mere watan ke logon zara ankh mein bhar lo pani/ Jo shahid hue hein unki zara yad karo qurbani (oh people of my nation, fill your eyes with tears/remember the martyrs, their sacrifice).” The song was said to have moved Jawaharlal Nehru to tears.

The question is what is the meaning of Mata (mother)? Is Mata associated with particular cultures and religions or is Mata a secular conception, making it possible for people of diverse religions, who call themselves Indian, to pay obeisance to the nation as motherland?

The idea of Bharat Mata is largely of twentieth century vintage, born out of Bengali and Marathi vernacular nationalism. She was famously painted by Abanindranath Tagore in a lyrical wash image. Sri Aurobindo eulogised Bharat Mata in an early phase of his life but went on to develop an eclectic philosophical spirituality that criticised the distinction between the religious and the secular.

Bankimchandra Chattopadhyaya’s well known novel Ananda Math celebrated the motherland as a goddess. But it was Vinayak Damodar Savarkar, the founding ideologue of Hindutva, who propounded the idea of rendering “whole hearted love to our common Mother” and recognising her not only as “Pitarbhu but even as a Punyabhu,” i.e. as fatherland and holy land. A Muslim or Christian who does so will be welcomed into the Hindu-fold and recognised as Hindu, Savarkar argues in Essentials of Hindutva (1923). Thus it is possible for Muslims and Christians to make a choice, he held, “a choice of love”. Till such time as Bohras, Khojas, Memons and other Muslim and Christian communities do not make this choice they cannot be recognised as Hindus, Savarkar wrote. Savarkar celebrated the Sindhu and sanskriti and sages and seers who have founded or revealed the “schools of religion, the Thought of the Saptasindhus,” which have the indelible stamp of Hindu culture and sanskriti. “The essentials of Hindutva then are a common Rashtar, a common Jati and a common Sanskriti. The first two are connoted by Pitarbhu (Fatherland) and the last by Punyabhu (Holyland).”

As Janaki Bakhle puts it, Essentials of Hindutva was written as a sentimental love letter to the country and how it could reimagine itself. It sought to fill a vacuum in political leadership by “a nationalist credo that was both secular and Indian, necessarily invoking ritual and mythology as fundamental features of the Indian modern”.

Supporters of Savarkar have likewise argued that he was secular. But as GP Deshpande, the well known scholar (including that of Savarkar’s Marathi writing) asserts it is punyabhu, the idea of imbuing land with sacredness that makes Hindutva non-secular, deriving as it does from the concept of punya, which is connected to ideas of karma and rebirth embedded in Hindu metaphysics. Other proponents of Indian nationalism such as Mohandas Karamchand Gandhi notably did not use the idea of Bharat Mata.

The term Mata derives from Hindu lifeworlds. Several pagan cultures, many of which belong to areas around the Mediterranean and the Indian Ocean, have worshipped the ‘Mother Goddess’. As any scholar of Indian religions will tell you, the much larger and popular understanding of Mata is the divine feminine. She appears as the source of maladies and can cause affliction, but is also the healer as in the case of Sitala Mata. In Rajasthan massive crowds flock to the temple of this goddess who sits tall upon a hill. A festival, Sitala Ashtami, is named after her, when the hearth remains unlit and only food cooked the previous night, called Basoda, is eaten. In my husband’s family even tea could not be made on the gas (the electric kettle was the great saving grace!) but such had been the power of this goddess who caused all the poxes – small and chicken – that greatly troubled mothers of ailing children.

If I think of the regions where I have done field work, both Hindu castes and also some communities of Muslims would recognise the idea of the goddess in Mata. She has an amazingly diverse presence as Parvati, Durga or the collective goddess.

I can never forget my encounter with young Jamila, who was a medium for the goddess in a village in the Beawar subdivision of Ajmer district in the 1990s. After her death (indeed, murder by her husband and mother-in-law) her highly successful practice was taken over by her young brother who became the vehicle of bhava or the trance as the goddess now possessed him. Ironically he was among the persons targeted for conversion when the Viswa Hindu Parishad began its paravartan campaign in Beawar in the 1980s.

The contrast to these religious subjectivities is the ideology of Hindutva defined by Europeanist ideas such as the modern state, the modernist conception of religion and nation and the modern idea of nationality. The utopia it seeks is a strong and militarised political entity where a version of Political Hinduism becomes hegemonic over the other Indic religions and, indeed, over Hindu philosophical and spiritual traditions. To ask of Muslims or Christians to proclaim ‘Bharat Mata ki jai’ is violative the concept of monotheism concepts that is at the theological core of their religions. ‘Jai Hind’ rather than ‘Jai Bharat Mata’ is what some might proclaim – a few will even proclaim Victory to Bharat Mata – but choice is the essence of the matter and there must be no compulsion or pressure to constantly wear one’s patriotism on one’s sleeve and demonstrate it continually in one’s speech!

The author is a historian and political anthropologist whose most recent book is Israel as the gift of the Arabs: Letters from Tel Aviv