The 2021 census in England has broadened Pahari speakers' attempts to get their identity and language recognised. There are lessons in this. 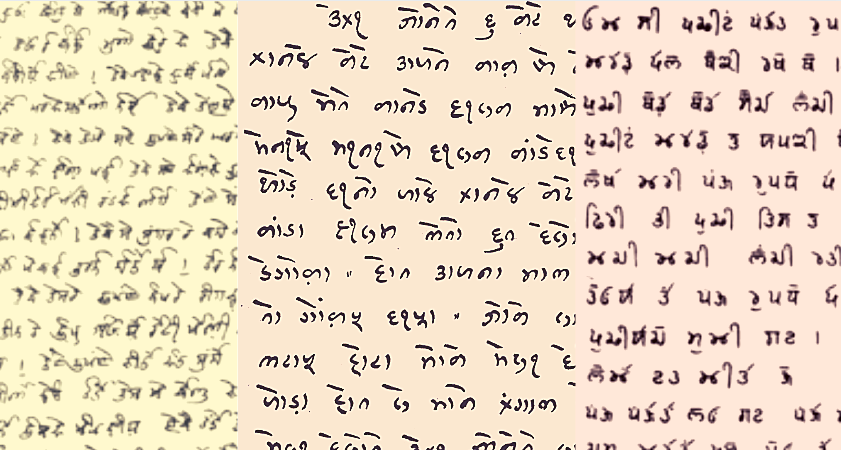 Pahari – Western Pahari – surprisingly, is one of the largest minority languages in the United Kingdom.

Close to a million people living in the country speak dialects of the language which is mostly spoken in parts of Himachal Pradesh, Jammu and Kashmir as well as the areas bordering Pakistan, which together lead to the formation of the Western Pahari Belt.

The recent efforts of the Pahari speaking people of England to have this significant community language recognised in the UK, through encouraging people to state their language as Pahari in the national census, deserves praise and the people of the entire Western Pahari Belt, especially Himachal Pradesh, can also learn from this move in order to preserve our linguistic heritage.

Western Pahari was classified as a language category by renowned linguist Sir George Abraham Grierson for languages spoken in what can be referred to as the Western Pahari Belt, which includes parts of present day Himachal Pradesh, Jammu and Kashmir and areas of Pakistan.

Due to migration, the language is also spoken in the United Kingdom. Western Pahari dialects were written mostly in the Tankri script before the 19th century, but now uses multiple scripts. Its written form is said to have originated in Sharda. Dialects of Western Pahari include Pahari-Pothwari, Mirpuri, Poonchi, Hindko, Gaddki, Chambeali, Kangri, Mandeali, Kulluvi, Bilaspuri, Mahasu Pahari and many others.

Dialects of Pahari (Western Pahari) are spoken by nearly a million people living in the United Kingdom, which is reported to be one of the largest ethnic non-European languages in the UK. The Pahari speakers of the UK mostly comprise people who originated from the Mirpur District of the erstwhile Jammu and Kashmir princely state, currently administered by Pakistan. They started settling in Britain in the 1960s, transferring their workmanship on British merchant navy ships to the industrial needs of the growing British economy. 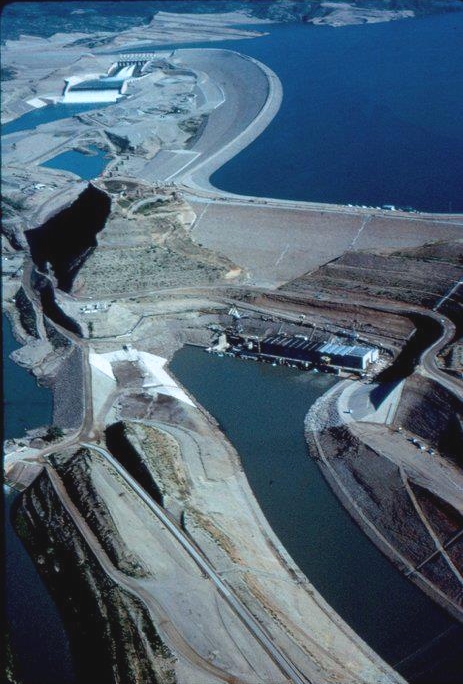 View of the Mangla Dam in Pakistan. Photo: Wikipedia/CC BY-SA 3.0

The migration fast-tracked after the construction of the Mangla Dam in 1966, in the Mirpur district due to which massive flooding left many villages submerged, leading to the displacement of over 100,000 people. Simultaneously, Britain was experiencing an acute labour shortage in many sectors due to the aftermath of World War II, and thus visas were offered to those who would fill positions. Many of the displaced Mirpuri Paharis travelled to England for work, having already established links during the days of the Merchant Navy.

They would, generally, travel back and forth to their homeland every few years or so. However, because of stricter immigration laws, their families joined them in the UK and both the opportunity and necessity to travel was decreased as children commenced schooling and communities became more established.

As a result, by the end of the 1970s, it became common for Mirpuri Paharis to be settled in the UK, leading to a massive increase in the number of people from the community living in the UK. Today, their population stands at 1 million with many members of this Pahari community serving in influential positions of the country.

The Pahari speaking people of the United Kingdom have worked for years on the preservation and promotion of the Pahari language in the country, which has also resulted in a number of a lot of language initiatives including, the Alami Pahari Adabi Sangat, established by Adalat Ali, a well-known Pahari writer; and scholarly studies on the sociological and linguistic aspects concerning the Pahari language, such as the works produced by British academicians like Dr Serena Hussain and Dr Farah Nazir.

Also, organisations like Portmir Heritage Foundation which was founded by Reiss Haider have come up aiming to preserve the cultural heritage of British Paharis. Furthermore, numerous social media influencers like Ruksar Naaz known for her award-winning YouTube Channel Browngirl problems1, and Tehseen who runs the TikTok and YouTube favourite the Nana G Show have also worked on promoting the language through Pahari language content.

However, the current 2021 Census has taken the efforts of the Pahari speaking people in the United Kingdom to an all-new level. Taking place every 10 years, people in England are currently filling in the census forms, which will be mainly online for the first time since it started in 1801. The Census asks questions on topics such as a person’s age, ethnicity, language, occupation, and relationship status. Thus, the Pahari community is seeing this as a golden opportunity for them to make their voices heard concerning the preservation, promotion and who knows…a possible official recognition of their Pahari (Western Pahari) language.

Online campaigns are being run to create awareness, especially among youngsters who speak the language with their parents and family members on a day-to-day basis but are unaware of its name. British Pahari social media influencers are also creating videos to raise awareness on the issue. These are being received well, especially by the second and third generations who were born and brought up in the UK. Videos from  TikTok star Wafa Hussain (whose real name is Taiba) are a case in point.

British academic Dr. Serena Hussain under whom I am also working as a Visiting Researcher in the Centre for Trust, Peace and Social Relations, Coventry University, is actively involved with the 2021 Census through a research funded project by the Arts and Humanities Research Council (AHRC) and the Economic and Social Research Council (ESRC).

Hussain is one of the leading experts on the National Census, a topic on which she completed her PhD. “The Census is one of the most important ways that any community can gain recognition. Even if a category isn’t listed on a Census form there is an option to select ‘Other’ and write in the identity or language you want to be recognised by. One thing we know about the Census is that it’s usually a benchmark for all official government data collection exercises. So in other words, if a category gains recognition on a Census form, that category will make its way into other forms as well,” she says.

“My research confirmed that Pahari is still very much alive in the UK, it’s one of the largest minority languages and the fact that young, British-born people are speaking it after three generations, shows us that it is something which our community takes pride in and enjoys. They identify very strongly with their mother tongue, but also on a practical level, they discuss how it is important for Pahari to gain recognition. A million speakers are not insignificant, and we require interpreters for our growing elderly population in the UK, so that they are able to obtain the services and help they need, as many of them still only speak Pahari,” she adds.

How will Paharis of J&K and HP be impacted?

Pahari speakers of Jammu and Kashmir and Himachal Pradesh could do something very similar to what the Pahari speakers of United Kingdom have done, as a census like the one currently happening in the UK is scheduled take place in India this year and could be conducted online. In recent years, nothing significant has happened in Himachal Pradesh and J&K concerning the promotion of the Pahari language.

The Pahari language was removed from the list of official languages of J&K by the Indian government recently, after it was made into a Union Territory in August 2019. This was damaging for the Pahari community in J&K, who have asked for Pahari to regain its official language status.

Also read: In J&K, Language Has Always Been a Political Tool for Polarising People

On the other hand, the people of Himachal Pradesh have been waiting for Pahari to be officially recognised by the Indian government, under the 8th schedule of the Indian constitution. A resolution was, in fact, passed in December 1970, by the Himachal Pradesh Legislative Assembly declaring Pahari as the language of the state but nothing has happened since then. Thus, the people of J&K and Himachal Pradesh could do something similar to what British Paharis are; especially Himachal Pradesh as the dialects of the language system are spoken within most areas of the province and according to the 2011 Census, the populations of nine out of the 12 districts reported their mother tongue as dialects of Western Pahari.

All this leads us to the fact that Pahari speaking people of Himachal Pradesh especially the academics, poets, musicians and social media influencers can work towards the promotion and preservation of the language.

This can help Pahari linguistic heritage in Himachal Pradesh to be preserved and a combined campaign centred around requesting individuals to mark their language as Pahari in the 2021 Census of India, which if successful, can even result in achieving the long-term goal of getting the language recognised under the 8th Schedule, which people across the political spectrum have mooted in the past decades. This would also fulfil the dream of the founding fathers of Himachal Pradesh like Dr Y.S. Parmar and Dr Narain Chand Parashar, who always supported the promotion and preservation of the Pahari language, which later Chief Ministers like Dr Prem Kumar Dhumal and Virbhadra Singh also endorsed in some way or form.

In conclusion, the fate of the Pahari language in the United Kingdom, India and Pakistan is still unknown, but the efforts of Pahari speaking people in the United Kingdom needs to be cherished as they are doing substantially more than the people of the other Western Pahari speaking areas in the current times. Such active efforts should be prioritised in J&K and Himachal Pradesh also, as recognition of community languages is even more important in today’s India, where there is little official support for minority language empowerment movements.

This piece has been published in collaboration with Himachal Watcher.

Vishal Sharma holds an LL.M. in Legal & Political Aspects of International Affairs from Cardiff University (UK). He is currently working under Dr. Serena Hussain as a Visiting Researcher at the Centre for Trust, Peace and Social Relations, Coventry University (UK).