Twitter has often been accused of failing to against trolls who abuse and threaten others, especially women. 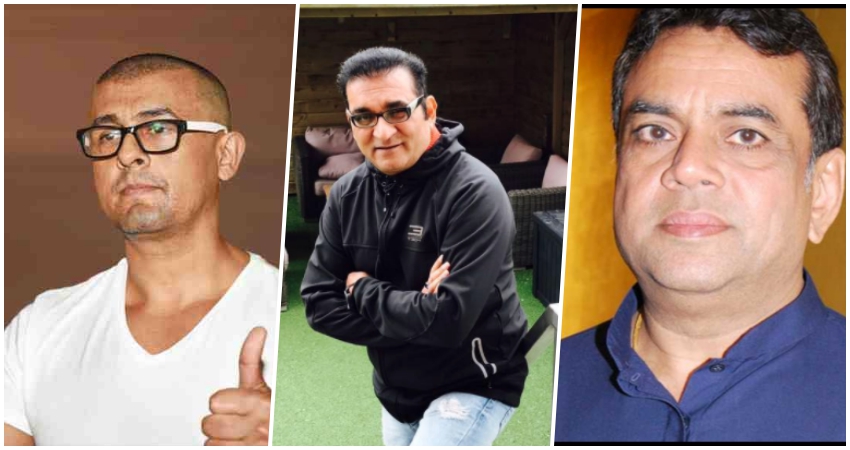 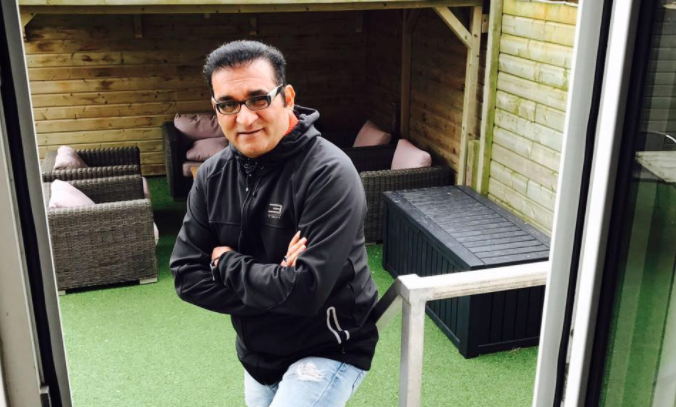 New Delhi: Often under attack for not being able to curb bullying, hate speech and trolling, Twitter on Tuesday suspended Abhijeet Bhattacharya’s account after he posted a string of abusive tweets, especially against women.

He targeted JNU student-activist Shehla Rashid on Monday after she tweeted a Hindustan Times story on the alleged involvement of BJP men in a sex racket.

Quoting her tweet, Abhijeet replied, “There is rumour she took money for two hours and didn’t satisfy the client… big racket.”

In another tweet, he had insulted a woman Twitter user when she called him out for his incendiary tweets, where he wrote, “You Ms Pak. Tell me your cage no? Will reach there… Will do the favourite pose.”

The former playback singer came out of obscurity a few years ago by riding the right wing bandwagon on social media.

What is the profile of people who retweet singer Abhijeet? Let's take a quick look. pic.twitter.com/MatwWNiD4w

Abhijeet, an ardent supporter of Prime Minister Narendra Modi and a self-appointed ‘desh rakshak‘, is no stranger to controversy. He was arrested in 2016 when journalist Swati Chaturvedi registered a police complaint against him after he posted a series of inflammatory tweets.

After being released on bail, the singer reportedly broke into tears. The regret didn’t last long; he soon said he would repeat his words if he wished to.

When contacted by PTI, Abhijeet claimed, “Author Arundhati Roy and people supporting JNU” were behind the suspension of his account.

“Yes, I just saw it. They are trying to block Paresh Rawal also. All Arundhati and JNU group behind this after Paresh Rawal and I tweeted against Arundhati for her anti- India stand,” he said.

Asked if he would take any step to reinstate his Twitter handle, Abhijeet said, “I (don’t) care a damn… entire nation is with me.” 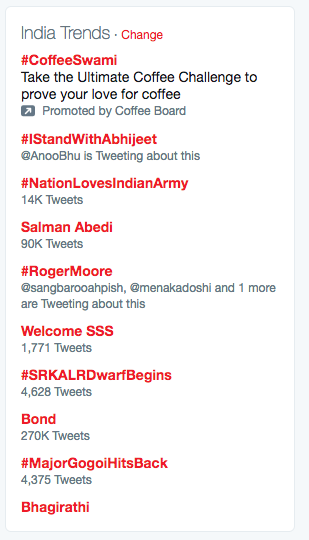 While there is no way to find out what “the nation” thinks, the singer’s supporters on Twitter made #IStandWithAbhijeet trend on the top position in India within a few hours of his account getting suspended.

Abhijeet wasn’t the only cause the right wing supporters were fighting for on Tuesday. BJP MP Paresh Rawal, who ignited a Twitter war after an outrageous tweet about author Arundhati Roy, was allegedly forced by Twitter to delete his tweet.

This is an absolute shocker! @SirPareshRawal being asked to delete his tweet by @twitter. Whatever happened to freedom of expression? #Shame pic.twitter.com/QMrRnha7Zg

The actor and his supporters in the BJP and on social media say he was reacting to Roy’s recent comments on Kashmir. But she never even made them in the first place.

After Abhijeet’s account was suspended on Tuesday, singer Sonu Nigam announced in 24 tweets that he was leaving the micro-blogging website, saying that the platform had no “balance” and was “one-sided”, full of “some nationalists, some just cold blooded pseudos”. 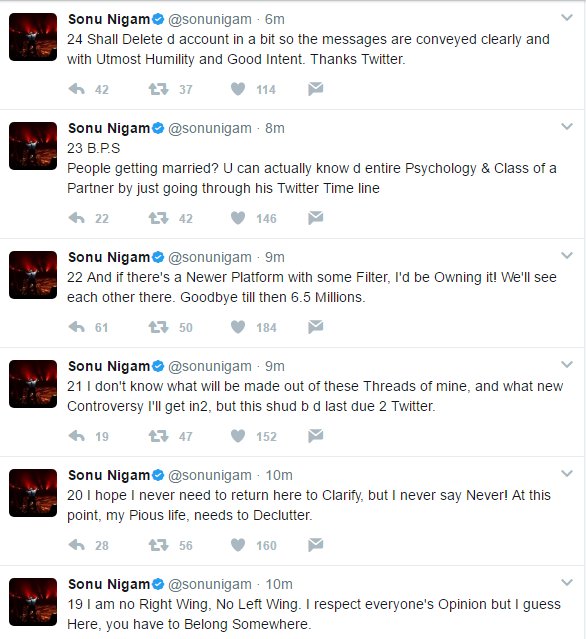 “Where’s the Balance? How is it all so one sided? Why is everyone so Angry here on Twitter? Why can’t there be a Sensible discussion?” he tweeted. He also defended Rawal’s tweet on Roy. If “a woman can endorse a picture of Gautam Gambhir in the front of the Army jeep”, he asked, why should Rawal be criticised. While he said Roy is entitled to her view, “other billion Indians have the right to feel let down too”.

When contacted by The Wire, a Twitter spokesperson said,”We do not comment on individual accounts but what we can say is that our rules are clear and we enforce them. We want people to feel safe expressing diverse opinions and beliefs but we draw the line when it comes to behaviour that crosses the line into abuse, including behaviour designed to consciously harass, intimidate, or silence another person’s voice. Those that violate our policies may find their account temporarily locked and/or be subject to permanent suspension. We encourage anyone who spots someone engaging in abusive behaviour to report the content in-app or file a report.”

It is unclear if the decision to suspend Abhijeet’s account is temporary or permanent.

Meanwhile, many have called out Twitter for not taking any action against Shehla Rashid for tweeting a morphed image of cricketer Gautam Gambhir tied to an army jeep. Gambhir had tweeted supporting the army after a video of civilians hitting jawans went viral in April.

Gautam Gambhir tied to an army vehicle, while he was on his way to vote in the bypoll. pic.twitter.com/iVTXcjfrfV

When contacted, Rashid said, “I’ve written a tweet clarifying that while Paresh Rawal actually meant it, I didn’t really mean it. My tweets were sarcastic, to show the double standards of the government toward Kashmiris. I speak as a helpless Kashmiri who is pointing out the double standards of police action. While voters in Kashmir are tied to jeeps in order to protect army from stone pelting, ABVP and Hindi Yuva Vahini are given a free hand to unleash violence either in police presence or against the police itself (Ramjas and Agra incidents respectively). SSP Love Kumar’s house was attacked and his family terrorised in Saharanpur. Did anyone use human shields?”

For every slap on my army's Jawan lay down at least a 100 jihadi lives. Whoever wants Azadi LEAVE NOW! Kashmir is ours. #kashmirbelongs2us

“Gautam Gambhir openly called for violence against Kashmiris in a tweet where he says that for every Jawan slapped, 100 Kashmiris should be killed. This is a call to kill innocents, a call to use disproportionate violence. He has the luxury to say this without engaging with the realities of being a Kashmiri. I’m not even saying Gambhir should be tied to a jeep. No one should be. But I stumbled upon this image on the Internet and it represented my anger as a Kashmiri,” she added.