Tom Alter: The ‘Angrez’ Who Wrote His Memoir in Urdu

It angered the actor that people were surprised he could speak in Hindi or Urdu, and many did not know he could also write in the Urdu script. 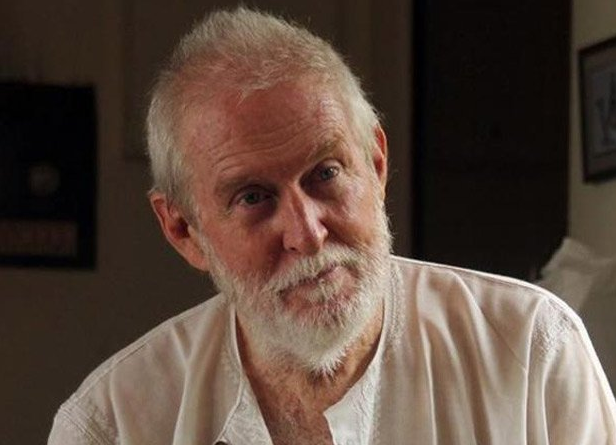 Noted Bollywood actor and theatre personality Tom Alter is often remembered for playing roles of Angrez or gora in Indian films. This, despite the plentitude of characters that he donned during his stint of over four decades in Bollywood. “I’ve worked in more than 400 films so far, of which, I have played the role of Britisher in 10 films. It’s 2017 and I am still called the Angrez,” a dejected Alter had told the Times of India, a month before his death on September 29, 2017. Apart from films, Alter also acted in numerous plays and is the only Indian actor to have played Mirza Ghalib, Maulana Abul Kalam Azad and Bahadur Shah Zafar.

People would often be surprised at the chaste Urdu/Hindi that he spoke, despite having American origins — so much so that it could even put a native speaker to shame. However, this was perhaps what he hated the most, for he considered himself to be as Indian as anyone else. In fact, his agitation at the countless times that people surprisingly addressed him with the question of how fluent his Urdu or Hindi was, could be seen at the launch of Samvidhaan: The Making of the Constitution of India.

In Samvidhan, a ten-part television mini-series directed by Shyam Benegal, Alter played the character of Maulana Abul Kalam Azad. At its launch in February 2014, when a journalist asked him ‘Aap itni achchi Hindi kaise bol lete hain?’ (How do you speak Hindi so fluently?), pat came Alter’s reply, “Muhn se (With my mouth).” He then asked the journalist about the latter’s country of birth, to which the journalist replied, “India.” The sarcasm was barely hidden in Alter’s voice when he retorted that this was probably why the journalist was so fluent in Hindi. Alter went on to add that his reason for being so fluent was the same as the journalist’s, and that he had been answering this question for the past 40 years. “I have been telling people that I was born in this country. Why are you so surprised if I speak good Hindi? When you guys speak in Hindi, do I look surprised?” responded a visibly agitated Alter.

M. Sayeed Alam, a veteran theatre director and writer of nine plays in which Alter played the lead role, believes that this kind of stereotyping happens because of the way ‘the Angrez’ are portrayed in popular cinema. “It is unfortunate that even a multi-talented actor like Tom sahab was, more often than not, reduced to the stereotypical role of the Angrez or the gora,” Alam told The Wire. Alam produced and directed 190 shows of the famous play Maulana Azad, with Alter playing the first education minister. Apart from this, they collaborated for eight more plays in which the veteran actor played the roles of Ghalib and Bahadur Shah Zafar. “In only one play (Raja Nahar Singh) out of the nine that we worked on, did he play the role of an Angrez,” said Alam, recalling his fifteen-year association with the actor.

In 2002, when the duo started working on Maulana Azad (the play), the script that was given to Alter was in Devnagari. Alam recounts how, even though Alter had been rehearsing with the script for a week, he could not resist himself from asking for the Urdu (Nastaliq) version of the script. “I was not aware at that time that Tom sahab could read the Urdu rasm-ul-ḳhat (script). Throughout the week, I had been suggesting names of important Urdu books that had been translated into English!” He confesses how “this was both an attempt on my part to come across as a learned man, well-versed in Urdu and English”, as also a desire that he (Alter) should read Urdu literature, even if in translation. “To his credit, he did not tell me that he had already read them,” he further added. 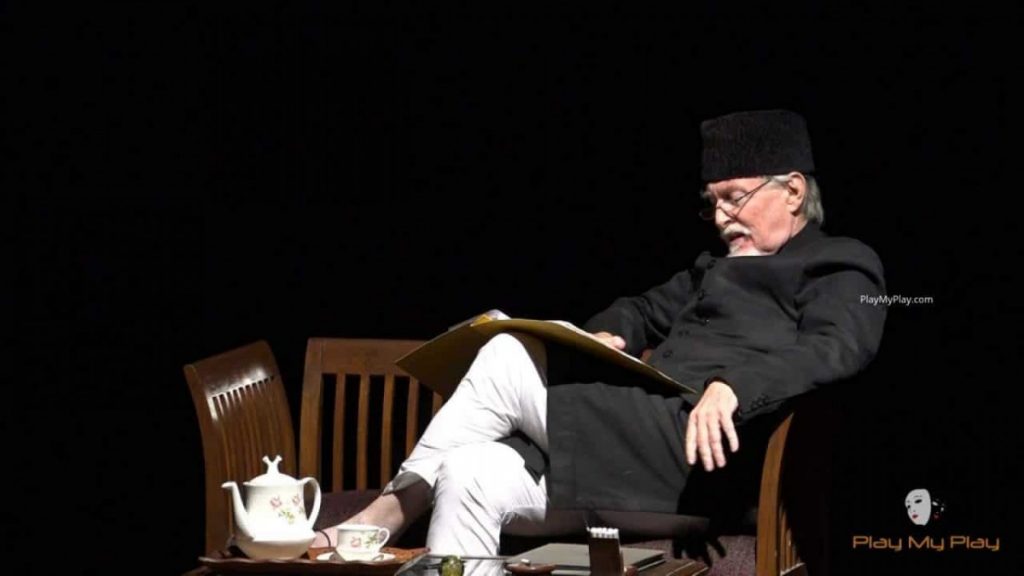 The actor was of the view that neither Urdu nor Hindi could be properly written in the Roman script. Alter would further tell Alam, “Ek to Hindi-Urdu Roman mein likhi hi nahi ja sakti, aur aap logon ko Roman mein Hindi-Urdu likhna bhi nahin aata (Firstly, neither Urdu nor Hindi can be written in the Roman script, and even if that’s possible, people don’t know how to properly write them in Roman).” He added, “After that incident, I would always have two copies of the script in Urdu — one for him and another for myself.”

In fact, Alter’s aversion for Urdu that was written in Roman was so strong that he once refused to release a book during Jashn-e-Rekhta. “He was very angry when he got to know that an Urdu book had been written in Roman,” says Alam. “When some of us tried to persuade him, Alter said that I would have given it a second thought even if it had been written properly (in Roman)”, he added.

Not only could Tom Alter speak and read in Urdu, he could also comfortably write in it. In fact, not many people know that he wrote a four-part memoir for the Urdu Adab magazine, a quarterly published by Anjuman Taraqqi Urdu (Hind). They were published in four issues between July 2016 and July 2017. And they were written on the request of Ather Farouqui, the editor of Urdu Adab and general secretary of the Anjuman. “He used to send us the hand written article and we would get it typed and published,” Farouqui told The Wire. “It has already been translated into English by me from the original Urdu, but has not been published so far for some reason,” he added.

In the memoir, while detailing his passion for the language, Alter writes, “The story of my love for Urdu can be traced to the legacy I inherited from my parents … my father was born in Sialkot and grew up to be a priest, following in the footsteps of his father, who too was a Protestant missionary. In pre-Partition Punjab, Urdu was the language of church services. During our childhood, we never heard the word “Bible” or “New Testament.” All we knew was Injil–e-Muqaddas, the Urdu title for the Holy Bible. In those days, churches in the Punjab held services regularly in Urdu from 7:00 to 8:45 every morning, so we started our day with hearing God’s word in Urdu.”

A graduate of the Film and Television Institute of India (FTII), Alter adds, “I decided to take formal lessons in Urdu, and this coincided with my resolve to become a professional actor. I joined the Film and Television Institute of India at Pune soon after.” It was in Pune that with the help of a classmate, he had an Urdu teacher named Mohammad Rafiq. Both of them became good friends. “He would cycle down thrice a week to teach me Urdu and charged a fee of Rs 50 per month. This was in 1972, and I learnt a lot from him during those lessons,” he writes. In 1974, Alter left Pune for Bombay, after completing his course at the film institute. 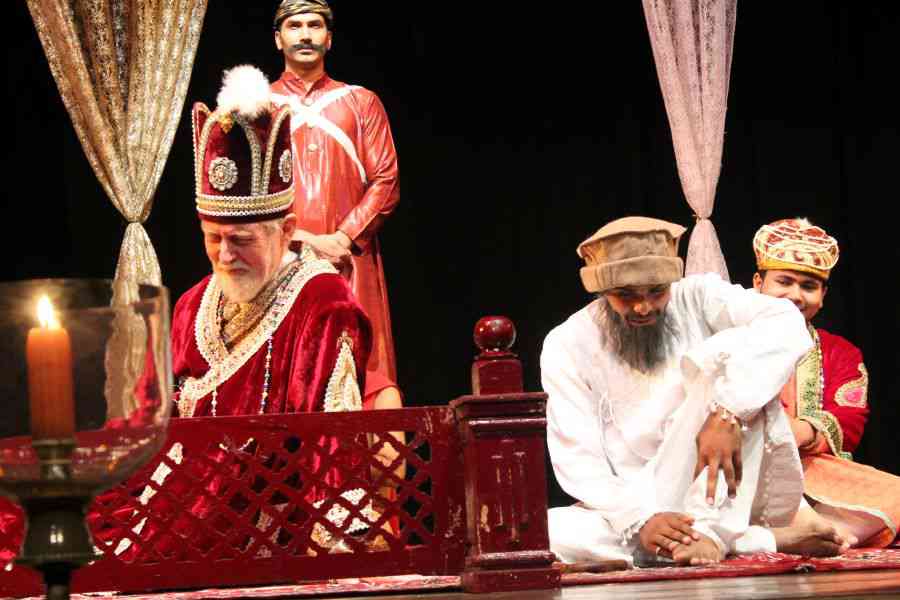 In Bombay, he became acquainted with several teachers, but it was Jalib Mazahiri who helped the actor gain a grasp over the language. Mazahiri used to teach in an Urdu medium school near J.J. Hospital in Bombay Central. “He had his own style of teaching and helped me pick up a lot of Hindi — modern Hindi full of Sanskrit words, as well as Persian words during my lessons. Jalib Sahib was passionately fond of poetry, and in this way I came to know much about Urdu poetry as well as prose,” Alter writes.

“Jalib Sahab showered praise on both of these films (Chameli Memsahab and Shatranj ke Khiladi),” he records in his memoir. “I clearly remember the comment published in the Urdu daily Inquilab, when my film Chameli Memsahab was shown on TV. The newspaper commended it with these words: “The way dialogue in Urdu should be delivered needs to be learned from the language of Tom Alter in Chameli Memsahab!” he further notes, adding “Jalib Sahib was simply delighted upon reading that comment.”

Jalib passed away in the mid-80s, leaving Alter devastated. “He had, by then, become an integral part of my life. He would often scold me, but I was delighted to learn that he was also very appreciative of my films and found them quite appealing,” the actor recalls in his memoir. According to Alter, Jalib was also the khandani ustad (family teacher) of Dilip Kumar, who once told him that the secret of good acting is Sher-o-Shayari.

“I especially remember this one time when my father visited me. He was unwell, but during his visit, he and Jalib Sahab would sit together in a corner of the room and converse in chaste Urdu for hours at a time. My father shared with him an Urdu saying that he was fond of: Ilm par amal karo, meaning ‘One should live one’s teachings’. “Sadly, both of them died within a year or two after this meeting, but I was very glad that these two men who had such an influence on me were able to have met,” wrote Alter.