The Rhetoric of Partisanship 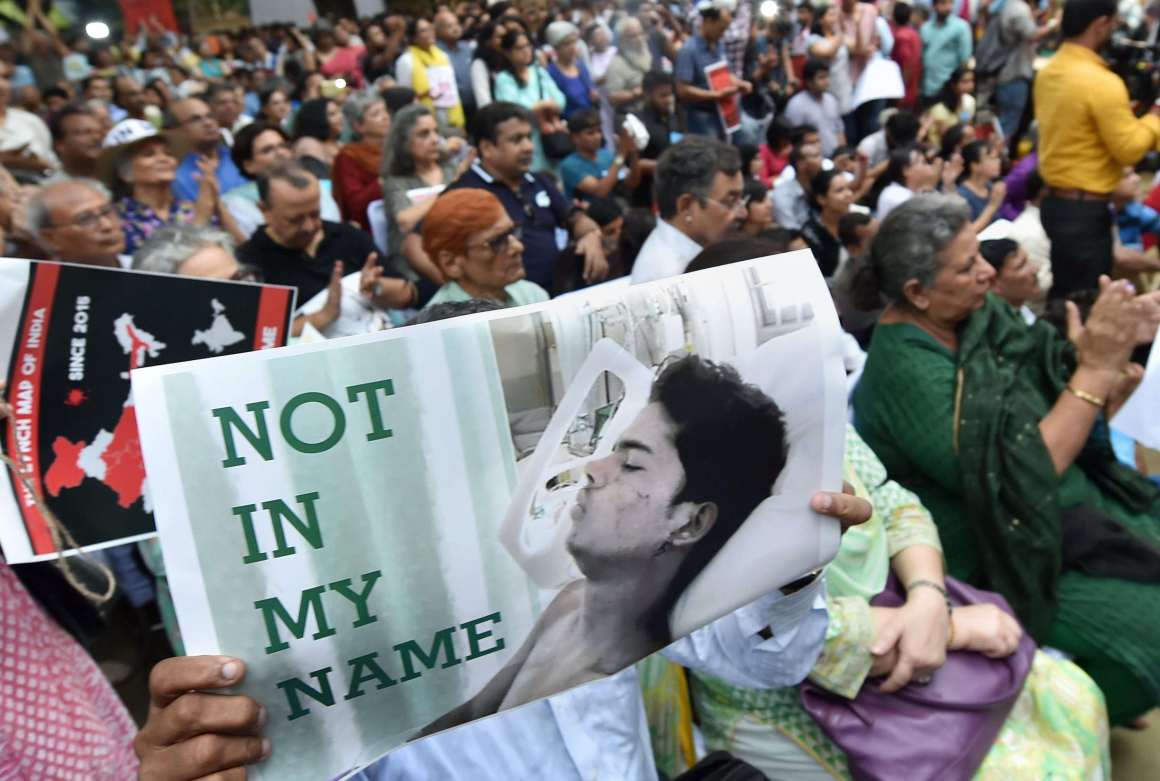 Citizens hold placards during a silent protest ” Not in My Name ” against the targeted lynching, at Jantar Mantar in New Delhi on Wednesday. Credit: PTI/Shahbaz Khan

The origin of the term “reactionary” can be traced back to the French Revolution. It derives from the French word réactionnaire, from reaction, and refers to those who wished to restore the conditions of the Ancien Régime. Now it refers to those conservatives (not libertarians or classical liberals) who are opposed to social progress, progressive policies, or any threat to the old order.

In his classic book, The Rhetoric of Reaction, written twenty-five years ago, Albert Hirschmann noted that criticisms of government programmes aimed at the poor, usually from the right of the political spectrum, fall into three general categories: futility (it will not work), perversity (it will have negative unintended consequences that will exacerbate the problem it aims to solve) and jeopardy (it will work but at the cost of something else that is valuable).

They remain strikingly relevant today. For example, some of the standard arguments against anti-poverty policies, such as The Mahatma Gandhi National Rural Employment Guarantee Act (MGNREGA), run like this: they are ineffective because of implementation problems that take the form of leakage, corruption, and administrative inefficiencies (futility); they perpetuate poverty because the poor start depending on government doles (perversity); and they may work, but they will be diverting resources away from growth-focused policies needed for long-term prosperity for all, such as investment in infrastructure (jeopardy).

In India, in the era of social and digital media, I see a new class of “reactionary” politics. The internet has given the argumentative Indian a much broader platform and a louder microphone to engage in the national pastime. From TV to Twitter, from face-to-face to Facebook debates rage over teacups or other beverages of choice, around the clock and across the world.

The new rhetoric of reaction constitutes a set of standard reactions to any form of protest. Suppose something happens (call it incident A) where one individual is harmed by another individual or group of individuals, and this upsets group X causing them to protest. Then the responses of those who are politically opposed to X or have some reason to be on the defensive regarding A (for example, because those alleged to have committed the criminal act belong to their social or economic group), will typically fall into one of the following categories:

Selective outrage: How about incident B, why were you not upset about it? Popularly referred to as “whataboutery”, this charge is meant to expose a “rival” group member trying to take the moral high ground by taking political advantage of a situation. The implication is, group X keeps quiet when one their group members carry out similar acts but protests when someone belonging to the rival group Y does the same thing.

Biased narrative: Yes, A did happen but that is only part of the picture. You’ve got to put it in the context of various other things (usually past or concurrent injustices) and then you will be less outraged since it makes A justifiable as a defensive or retaliatory action, or it reflects a systemic problem (e.g., law and order machinery) where the identities of the victims and the perpetrator are not relevant and should not be used for political purposes. Those taking this stance are sometimes called the “but-brigade”, namely, apologists who want to place event A in a broader context where moral judgement becomes harder, and some sympathy for the supposed perpetrator or the side he or she belongs to is claimed.

Insufficient moral capital: This can be applied to those who are protesting or the victims of the incident. For example, your group X is associated with so many bad things, and so what gives you the moral right to protest on A without acknowledging all the other sins? Or, yes, this was “unfortunate” (leaving aside the point that anything other than natural disasters is not unfortunate) but the victims may have done something to provoke it or do not have an unblemished past. This argument requires the victims as well as the protesters to be pure as fresh snow to qualify for our sympathy and to be entitled to demand justice.

The most recent example of a protest that attracted criticisms falling neatly into one of the above three categories is the citizens’ protest ‘Not in My Name’ that took place last Wednesday. This was a protest against recent incidents of mob violence across the country that have targeted Muslims and Dalits, most notably the gut-wrenching incident of a young sixteen year old boy named Hafiz Junaid being lynched to death and his brothers brutally attacked in a train on June 22 by a mob.

Let us consider some of the reactions from spokespeople of the ruling party. A common reaction was that the protestors all over the country were the usual anti-government elements. This falls neatly into the first category – selective outrage. Another common refrain was that the killing had nothing to do with the religion of the victim or the perpetrators, it was just a tussle over a seat on a train. Leaving aside the irony of a spokesperson of the ruling party elected on a platform of efficient governance describing murder due to altercation over a seat as a routine and unremarkable matter, this falls squarely in the second category of biased narrative.

If we consider some of the reactions of media outlets sympathetic to the government, a simple summary is that the mainstream media is hopelessly biased and the protest simply reflects selective outrage. And the main piece of evidence is that there wasn’t similar outrage in the case of the murder of DSP Mohammed Ayub Pandith outside the Jamia Mosque in Nowhatta, Kashmir. He happened to be a Muslim, but was a public servant and was killed by a mob of Muslims.

Interestingly, some of the critics of the protest coming from the left-liberal side of the political spectrum illustrate the third standard reaction, namely insufficient moral capital: the protestors are privileged upper-caste elites who benefit from a highly inequitable and oppressive socio-economic system. The campaign is disingenuous because they are protesting only to keep their brand-name superficially clean, so that they can continue with the status quo. I have not seen examples of questioning the character of the victim in this instance, but a common refrain in the case of sexual assaults is what was the victim doing there or why was she wearing a specific dress.

The ‘Not in My Name’ protest is just one example. There are others where the roles of the political forces are reversed. But the broader point applies – these three types of reactions to any form of protest reduce a question of justice, which is objective and can potentially be settled, to one of bias and partisanship, which is always subjective and can never be settled. The result is, there are no winners in this game, only mutual name-calling.

There is another way. It is to call a murder a murder or a crime a crime, and to agree to protest irrespective of the identities of the victims and the perpetrators. That way, whichever political side we belong to may lose from time to time, but the game will always have a winner and each side will always have a chance to win.

Maitreesh Ghatak is professor of economics at the London School of Economics and has previously taught at the University of Chicago.