The Portrait of a Poet

In the collected poems of Gopal Honnalgere, we find a poetic style quite different from the Bombay school.

In the inside back cover of The Collected Poems of Gopal Honnalgere (edited by K.A. Jayaseelan, Poetrywala, Mumbai, 2020), we see a black and white picture of the poet. It is not a very clear picture, but it is easy to make out his square jaws, impressive nose, famous curly hair and vulnerable eyes. Honnalgere is wearing a sweater and holding a pipe with his right hand. The pipe touches his lips.

In a short essay titled ‘Remembering Gopal’, poet and editor E.V. Ramakrishnan remembers meeting Honnalgere in Hyderabad in the 1970s:

“He stood out in any crowd with his lanky frame, reddish hair and overflowing kurta.” It is almost as if someone is artificially colouring the B&W author photograph. There is one difference though — Ramakrishnan doesn’t remember Honnalgere smoking a pipe. “Gopal used to smoke ‘Charminar’,” Ramakrishnan remembers. “Poets, intellectuals and activists invariably smoked ‘Charminar’ cigarettes in the Seventies, as the brand was cheap and strong.” 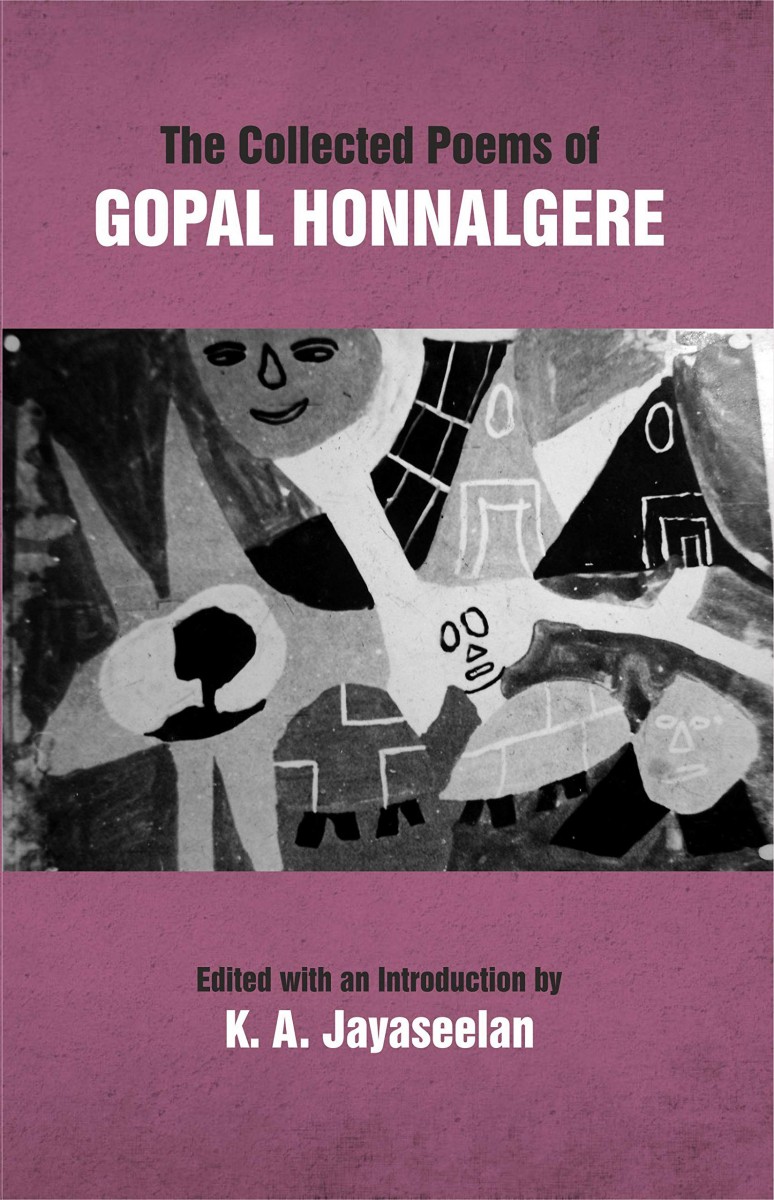 The Collected Poems of Gopal Honnalgere

Till now, Honnalgere’s work has been mostly unknown to readers of Indian poetry in English, though he published six volumes in his lifetime. While the first two – A Wad of Poems (1971) and A Gesture of Fleshless Sound (1972) – were put out by P. Lal’s Writer’s Workshop in Calcutta (now Kolkata), the rest came out from obscure, independent presses in different parts of the country. Some of his poems were also included in C.D. Narasimhaiah’s An Anthology of Commonwealth Poetry (1990, Macmillan). “The first two volumes… we may rightly consider his juvenilia,” writes Jayaseelan in his introductory note, “Gopal Honnalgere (1942–2003): The Poetry and the Poet.” The current volume, which includes poetry from all the books Honnalgere published during his lifetime, is a labour of love of his friends.

In doing so, what they claim to have done is excavated an essentially Indian idiom for English poetry written in the country. “The typical Indo-Anglican poetry — I have especially in mind the poetry of the Bombay school, Nissim Ezekiel and company — was a sophisticated poetry that flaunted a perfect idiom that cleaved close to the language of contemporary English and American poetry,” writes Jayaseelan. “The poets were mostly urbanites who had one leg in India and one leg abroad. But Gopal Honnalgere wrote what was distinctly ‘Indian English’. And he wrote it unselfconsciously.” Almost any poem that we pick from the book under review proves how Honnalgere’s aesthetics was significantly different from the Bombay school.

Also read: The Women of South Asia Sing Their Defiance

Take for instance, “Morning In My Bathroom” from Internodes (1987):

it is snowing
in the himalayas, london
paris, new york and Moscow
but here my little bucket of water doesn’t freeze
only my nose, ears
and fingers have become numb
before i wash my body with cold water
like a good old Brahmin

The poem travels in an almost scattered manner. It does not seek to elevate itself into something philosophical but continues its quotidian pursuit:

There is something untidy about the poem, lacking editorial discipline. Perhaps this is a reflection of the kind of scattered life the poet had – he found it very difficult to hold down jobs and frequently moved from one town to another in search of employment. Yet, that is perhaps where its charm lies. The first image of the narrator in his bathroom with a bucket of water is one of vulnerability, perhaps caused by lack of prosperity. The last image  almost cinematic – is one of self-effacement.

Also read: ‘Corona Is Advancing, Humanity Is Dying, the Year Has Passed!’: Kishwar Naheed Sums up 2020

Honnalgere writes: “i was born in a middleclass family”, in “The Bicycle”, one of the unpublished poems included in this book:

One can almost imagine it as a Bhupen Khakhar painting. The faces of all the characters in Honnalgere’s canvas are unrealistic, effaced.

The poetry of Ezekiel and Arun Kolatkar have been identified by literary scholars as an expression of modernity in Indian literature, made possible by their location in a particular geographical and political spectrum. Honnalgere’s poetry is another branch of this modernity, perhaps only more indigenous in its expression. Undoubtedly, it is less urban – it is more suburban, and perhaps more authentic. What emerges is not only a portrait of the poet but also of the country.