The History Behind Delhi's Weekly Bazaars

Delhi's hafta bazars have existed for almost a millennia in close proximity to the 'urban villages'.

While growing up we were subjected, like most school-going children in this country, to rather boring texts in school. The texts were taught by teachers who were even less interested in the excruciatingly painful narratives than we were. The results of such exchanges were obvious; we remember little of what we were taught.

Our only memories of school are times when we got a break or when we were out of the classroom playing silly games that kids that age normally played. Most of us have fond memories of how we loved to make life miserable for our teachers and how universally disliked most of them were.

Amidst all this vagrant behaviour, when we were trying our level best to – in the words of Mark Twain – not allow school to interfere with our education, there were things that were somehow imbibed and some of them have remained embedded in our minds.

One of these is a description of a weekly market, called a Haat or a Penth in Uttar Pradesh. The institution is known as a Peth in Maharashtra, like the Budhwar Peth in Pune and as Pet, for example, Alwarpet and Saidapet etc, in Tamil Nadu.

The Pets were in the nature of quasi-permanent markets, unlike the Peths of Maharashtra and the Haats or Penths of North India, which were weekly markets.

The scene of utter chaos, the hustle and bustle, the pushing and shoving, the calls of the hawkers, kids running all over the place and crotchety old men making themselves more insufferable by the minute are the images that flit in and out, like a kaleidoscopic vision, the moment we try to recollect the description of the Penth in our school textbooks.

It is this scene of chaotic excitement that had stayed with us and, once we moved out of the protected cocoon of living in New Delhi and became aware of the existence of these markets in different parts of South, West, East and North Delhi, it all came rushing back.

Gradually, over the years, we began to observe these markets a little more closely and realised that they were not so chaotic and disorganised as they appeared at first sight.

One thing that became clear very soon was that the weekly markets essentially traded in four broad categories of merchandise: (i) spices, grains, pulses, beans, legumes, readymade pickles and ingredients for do-it-yourself pickles and cooking related implements like grinding stones, pestles, mortars and cooking vessels (ii) fruits, vegetables, fish and chicken (iii) garments, and shoes both export surplus items, hand-me-downs in good condition, the kind one would find in a flea market and “original duplicates” like ‘Adibas’ and ‘Nice’ and cooking vessels and (iv) plastic goods like buckets, mugs, stools, strainers etc.

A closer inspection of the vegetables being sold threw up an interesting angle to the kinds of vegetables being sold in different localities. For example areas with a concentration of people from the four southern states had many stalls selling drum-sticks, areas with Kashmiri neighbourhoods had greens like kadam and haak, vegetables which were not so easily available in other areas and markets that had a large number of shoppers from the eastern states, especially Bengal and Bihar, had more fishmongers than the other weekly markets.

The most striking thing about these markets is the fact that they come up on a fixed day of the week at a location which is close to an ‘urban village’. For example, the Thursday market near a Mother Dairy outlet in Patparganj is close to Mandawli, the one that comes up every Friday near St. Thomas Church opposite Safdarjang Enclave is next door to Mohammadpur, the one that comes up near Sector 13 in Rohini, probably every Sunday, is located next to Razapur, while the Saturday Bazar opposite Fortis Hospital in Vasant Kunj is set up every Saturday next to Kishangarh. 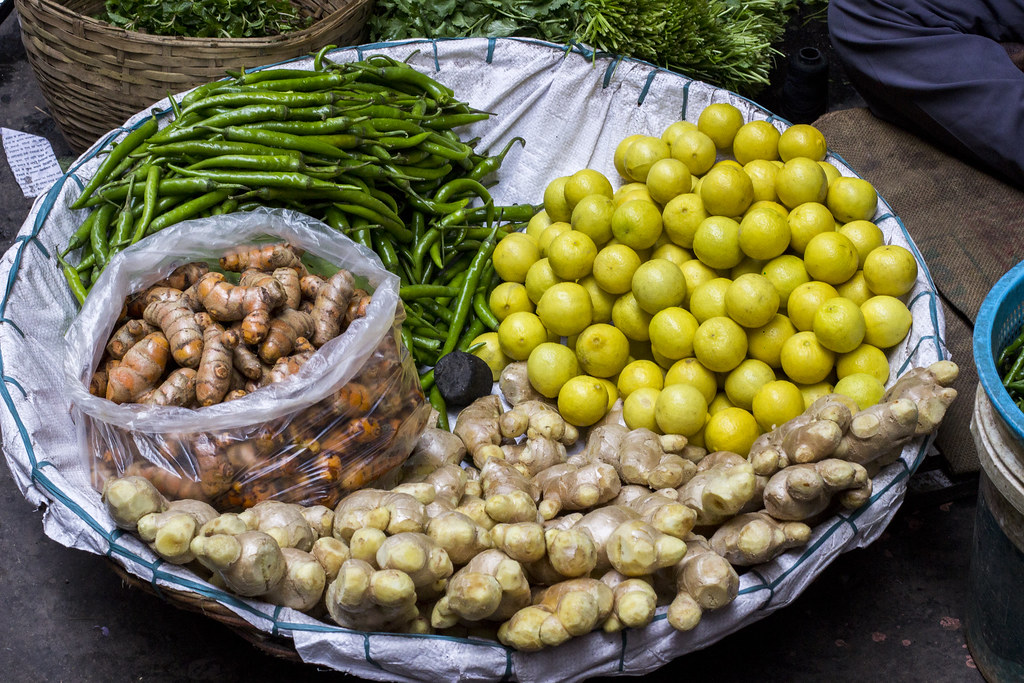 The proximity of each of these markets to a village, and there are hundreds of these weekly markets spread through the length and breadth of what is now known as Delhi, is proof, in our reckoning, that these markets have been around for as long as these villages have existed.

Once the antiquity of these villages is established it will be seen that these hafta bazars (weekly markets) for that is how they are known, are an institution that has existed for almost a millennia and in some cases even longer. We say this because the villages would have existed here before the Tomars, the Mamluks, the Khiljis and others decided to rule from Delhi.

Take the village of Adhchini, for example. Adhchini means half-built, there must have been an unfinished building in the area that gave the village its name, this is only an educated guess, but if the word of old timers is to be taken seriously, this village was earlier known as Sarai Namak.

What is beyond dispute, however, is the fact that Nizam-ud-Din Aulia, his widowed, mother, Bibi Zulekha, known to her devotees as Mai Saheba and her brother took a house on rent in Adhchini when they moved out of Hauz Rani. Mai Saheba, who was herself a venerated Sufi, died in 1250, full 769 years ago and was buried in her own hospice, in a tradition that many Sufis followed.

Now, what does this have to do with the hafta bazars you may justifiably ask? We will take up this question once we have shown that all these villages have a long history.

Also read: How Choice and Compulsion Made Delhi a Culinary Capital

The second point that we need to remember is the fact that villages do not normally have empty houses that one can hire and so both Adhchini and Hauz Rani must have been more then villages, almost like suburbs of Mehrauli – the site of Lal Kot, the first of the seven Capitals of Delhi, and that is why they had accommodations that could be rented.

Just as all villages or cluster of villages, spread across the length and breadth of India continue to be visited by traders who are constantly on the move, hawking their wares from village to village, the villages of Delhi are also similarly visited and the hafta bazars that serve them have to be a continuation of the hafta bazars that began centuries ago.

Why did the practice start, how has the clientele of these markets changed and what is the historical and cultural importance importance of these “messy” markets in the megalopolis of Delhi are questions that we will take up in the next piece on ‘Capital Matters’.