Growing animosity against the Centre in Tamil Nadu has taken the form of anger against the prime minister, which many allege has not received its due share of media coverage. 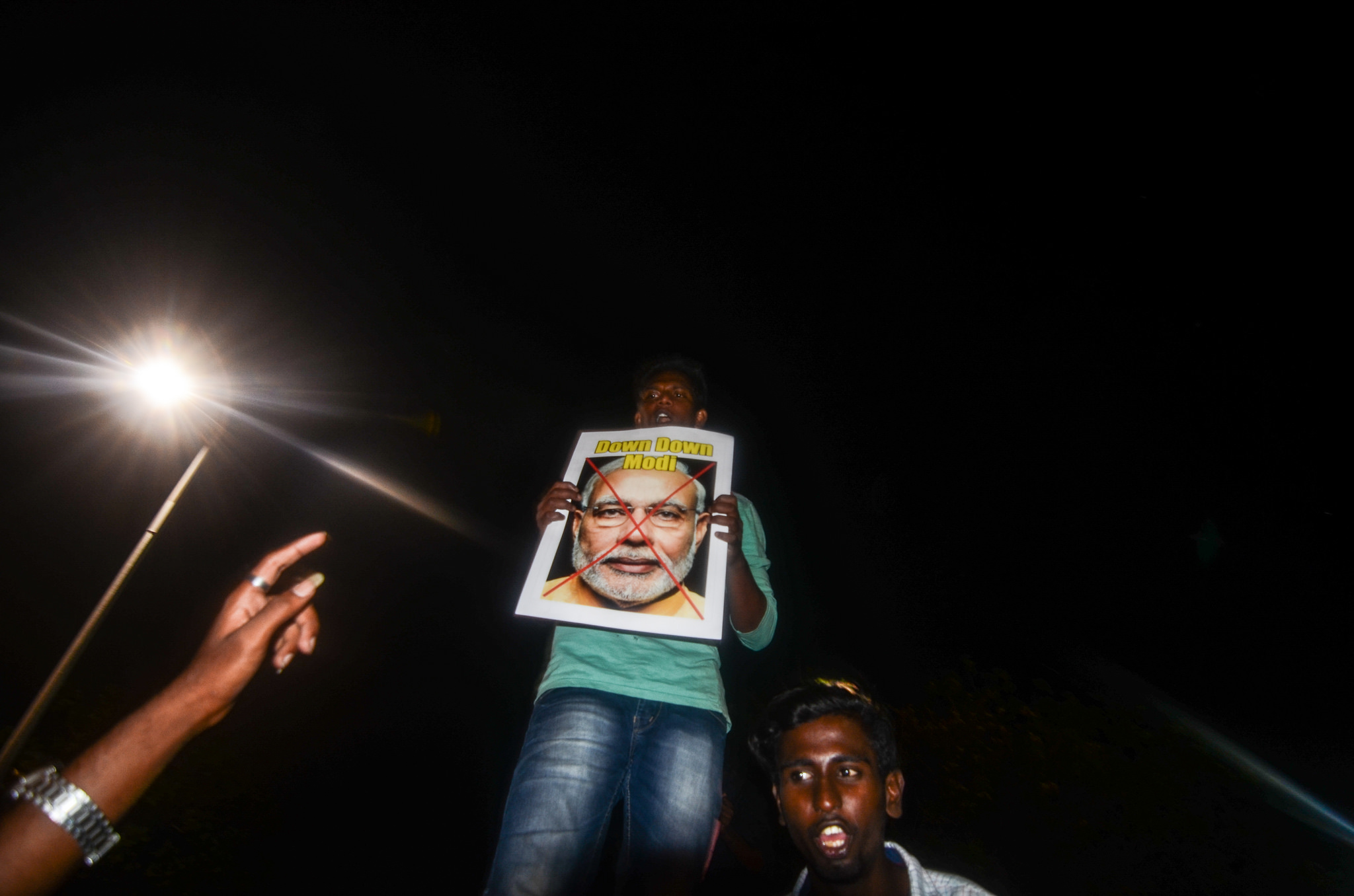 Chennai: As the police moved in on Monday to clear jallikattu supporters who are now in the seventh consecutive day of their protest at the Marina beach in Chennai, the latter are insisting that they will not budge from their demand for a permanent law for conducting the rural sport every year. Meanwhile reports from around the city and state have started coming in of sproadic incidents of violence as protestors battle the police.

On Saturday, Tamil Nadu governor C. Vidyasagar Rao promulgated an ordinance for conducting jallikattu in the state. Chief minister O. Panneerselvam assured the people that the government would introduce a Bill to replace the ordinance in the current session of the assembly which begins with the customary governor’s address on Monday. The protestors, however, rejected the chief minister’s demand to withdraw their struggle and the protests continued unabated not just in Chennai but also across several other places in Tamil Nadu.

Following the ordinance on Sunday, Jallikattu was held at a few places in the state, but the main event at Alanganallur in the Madurai district – which the chief minister was originally set to inaugurate – could not take place due to massive protests from the villagers.

The protestors did not allow Panneerselvam to enter their village and thus the chief minister was forced to return to Chennai. Meanwhile, anticipating a challenge to its ordinance from animal rights activists, the Tamil Nadu government has filed a caveat in the Supreme Court.

A noteworthy development of the struggle is the growing ire of the agitators and their leaders against the media for what they describe as “lukewarm coverage of massive anti-Modi protests” at the struggle.

The proponents of this theory openly accused the media of burying the rising anti-Modi sentiments at the Marina. “There were huge protests and sloganeering against Modi. Those raising the slogans were all youngsters and a quite number of women too. They used all sorts of filthy language against the prime minister and everyone present there in the protest venue will know this. I myself saw at least 15 of Modi’s effigies being carried out on top of a bamboo made item (called paadai in Tamil in which a dead body is carried to the burial ground) and later they were smashed in the sands as the police did not allow them to burn the same. I am not endorsing or supporting this sort of activities or the foul language used, but why should the media shy away from covering this to the extent which it should have been covered?” said A. Bakkiam, the south Chennai district secretary, CPM.

He said that there was an unwritten understanding on the part of the media – especially the electronic media – to suppress and blackout as much as possible of the anti-Modi protests at the Marina.

“There is a huge difference between what one sees on the television and what is happening at the ground level. Repeatedly media is focusing on PETA because PETA is just a soft target and constitutes just 10% of the total anger among the crowd. But over 90% of boiling anger is against Modi,” added Bakkiam. “When a protestor speaks to the camera on PETA she will be allowed. But when she starts speaking on Modi, she will be immediately pulled out by somebody and the concerned TV crew themselves are immediately discouraging her from continuing. I openly told this in a live TV talk show from the Marina beach and the anchor retaliated by asking how you can say that just because somebody was shouting against Modi there is a ground swell of anger against Modi. This is their understanding of the issue and what more I can say?”

Activists and authors too criticised the media for this attitude. “The all-pervasive corporate nature of media is showing its true colors in the coverage of Jallikattu protests. Unless you understand the fast growing corporatisation of media you cannot understand the media blocking out anti-Modi protests at this struggle,” said A. Marx, a writer and social activist.

“PETA is just a symbol for these protests whereas the main anger is directed against the governments and especially against Modi. Software professionals are joining the protests and when I spoke to them I could gauge their anxieties over their future and the looming large threat awaiting their jobs. They are coming here by using Jallikattu protests as a spark.”

He further added, “Those IT professionals who did not raise their little fingers and indulged in any protests when they were sacked from their jobs are participating in the Jallikattu struggle today.”

Repeated tweets by BJP leader Subramanian Swamy also generated anger among the protestors. “Swamy described the protestors as porukis, meaning street urchins. This had provoked the womenfolk too and they used all their choicest epithets to retaliate [against] Swamy.” said Thirumurugan Gandhi, the convener of a May 17 pro-Sri Lankan Tamil movement.

He added that it was disheartening that the media is losing its credibility by turning a Nelson’s eye to the massive anti-Modi sentiments at the protests. “The refusal of Karnataka to release Cauvery water inspite of repeated Supreme Court directions and the subsequent behaviour of the Centre has generated a huge animosity against the prime minister. Anti-Modi sentiment is the primary element of this protest and by refusing to give it its due share in their reportage just undermines the media’s credibility,” he further added.

But the state BJP has a totally different view point on this issue. “Nearly 99.99% of protestors are spontaneously fighting for Jallikattu and it should be appreciated. But the struggle was infiltrated by Maoists, Tamil separatists and Muslim fundamentalists. There are at least 3,000 Muslims taking part in the protests and they hold Namaz prayers at the protest venue itself. Is it not an irony of sorts that those who eat beef are in the forefront of the Jallikattu struggle” asked BJP treasurer S.R. Sekhar.

He further said the provocative slogans were a deliberate attempt to whip up passions against the Centre in general and the prime minister in particular. “All sorts of anti-national elements are participating in the protests. We don’t bother if you shout against Modi, but what about the nation? There are those in the crowd carrying placards which say that if you don’t allow Jallikattu, Tamil Nadu will secede. Portraits of bin Laden and LTTE leader Prabhakaran are rampant at the venue. Small children are carrying Modi’s placards with denigrating words about the prime minister. The media has actually indulged in excess coverage, certainly not lacking in this.” he added.

Meanwhile, tension was building at the Marina beach on Sunday afternoon as the protestors refused to call off their stir inspite of repeated appeals from the police. Over 7,000 policemen descended on the venue and it appeared that a brutal showdown between the protestors and the police was imminent. Elsewhere, at the Pudukkottai district during the Jallikattu, one young man was gored to death by a bull when he attempted to tame the animal.

R. Ramasubramanian is a regular contributor to The Wire from Tamil Nadu.