The Houses of Memory: In a Bangladeshi City, Ruins That Evoke a Sense of Loss 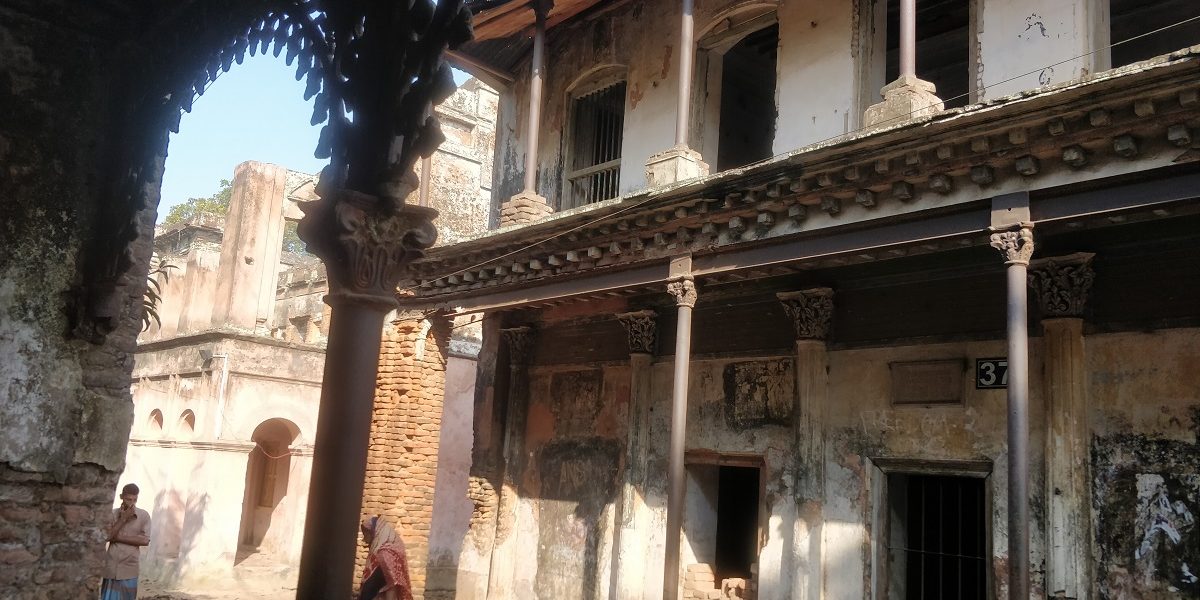 Memories of so many times come to me. Ancient and long ago stories, lost and scattered thoughts. Memories one after another, entangled in each other, like a forest to walk through
Intizar Husain, Basti

It was a propitious time to venture to Sonargaon. I was in Dhaka on work, at a loose end and a colleague told me of a very old abandoned city called Panam Nagar in Sonargaon in the Narayangunj district in central Bangladesh. I had heard of Narayangunj from my father and he had reminisced that the region was once a vast well to do habitation of Hindu families in undivided Bengal. The area of Panam Nagar is situated in the Sonargaon city, a city that was long an administrative center of Eastern Bengal, at least a thousand years old. Its ancient name was Subarnagram and it was located along the old course of the Brahmaputra. In the 13th century, the Hindu king named Danujmadhob established his kingdom in the area with Subarnagram as his capital. By the 17th century, the Mughals had subdued the Baro-Bhuiyan or the local chieftains, notably Isa Khan and Bengal came under their rule. Till 1610, Subarnagram remained an important centre of trade and politics until Dhaka became the preferred capital under the Mughals.

Panam Nagar, once an important trading centre for textiles like muslin, is a 600 metres long road that housed the wealthy merchant homes, totalling 52 in number. The townhouses are Indo-Saracenic in design with influences of European architecture. The whole area contains of a well laid out central road, large ponds circled by brick walls as well as the stunningly beautiful houses made of local bricks but with decorations of iron beams, marbles, arches, columns, balconies and friezes. The brick and mortar used were mostly local, but some of the wrought iron railings may have been imported from elsewhere, possibly from Kolkata or even further afield. Most of the houses are one to three-storey high and some are named such as Kashinath Bhavan built in the Bengali year 1305 (1899). 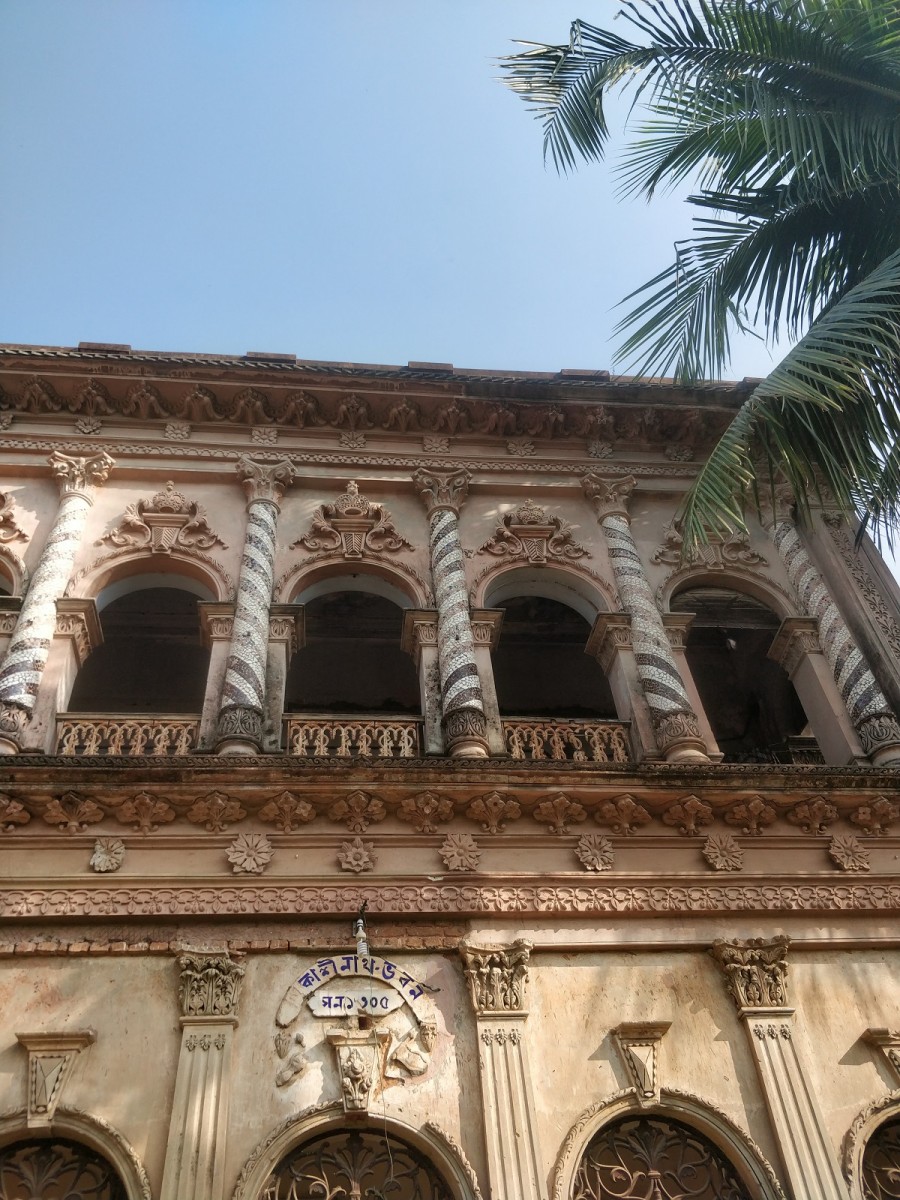 History is intangible most times but at others its materiality and visuality are so heartbreaking that one cannot even begin to understand the complexities and pathos of what one looks at. In Panam Nagar, the stately houses with their geometric white and black marble floors, their carved balustrades, their wrought iron hand railings, their shuttered windows all spoke of lives now lost in time but they also spoke eloquently of the irrevocable presence of those lives in the nooks and crannies of these ruined houses.

Like houses of memories, their shaded courtyards, the nat mandir, the temple to the family deity spoke of dreams and destinations of these lives, their loves and desires, the immeasurable hopes and ambitions. These must have been powerful men. What were their households like? Who were their women? How did they live, marry and give birth? What did they eat and wear and trade in? It must have been a time of great change, socially and politically. The English had come to stay and Bengal’s long tradition of trade in silk, cotton, saltpetre, jewellery, wooden crafts and spices must have allowed a co-mingling of cultures that can easily be discerned in the architecture of the houses. The marble and the coloured tiles, the staircase that goes up to a room segregated from the main house, the Victorian designs on the walls suggest a strong interaction between the masculine denizens of Panam Nagar and their European counterparts. Before the advent of the English, Bengal had seen the presence of the French (Chandannagar), the Portugese (Chittagong and Satgaon) and the Dutch (Chinsurah) in the form of adventurers, mercenary soldiers and privateers who wanted to profit from the vitality of Bengal’s commercial and trading activities. So for example, if the Portuguese presence in the West Coast was more of a military one, in Bengal it was chiefly mercantile. For the English who were later entrants, the reverse was probably true. Panam Nagar is filled with nostalgia, an invisible carapace of Weltschmerz (weariness) that covers its derelict and crumbling buildings. It is a space filled with infinite sadness at how things change and how the might and splendour of empires past. Yet it is also concretely substantial. In the small remnants of coloured tiles or in the half-open shuttered window, one sees and feels and connects to a humanity that may be gone but whose traces are still visible. The brick houses are mute but also profoundly expressive. They are filled with the invisible yet tangible presence of people. They stand as if ever ready to receive their inhabitants back. They are poignant reminders of our mortality and our corporeality but also an assertion of how death cannot always diminish what humans leave behind.

Historical ruins have always evoked in us a sense of loss and a sense of futility. Most important of all, it conveys cryptic stories to us, stories of stillness and humour, of desire and death. It tells us stories that present us the fates of strangers. Unlike the other kinds of art, historical ruins are present in time and space and their unique existences are marked at the places where they happen to be. Yet they also gesture at something that is not there, at a remove, at once revealed and understood. They gesture at the interstices of stories and memories.  As Walter Benjamin says of storytellers, we can say the same about historical sites: ‘What draws the reader to the novel is the hope of warming his shivering life with a death he reads about.’ (The Storyteller) What draws us to ruined buildings and abandoned houses are the lives that we imagine, lives that somehow magnify and illuminate our own lives and deaths, a very definite death and at a very definite place.