Photo Feature: Rohingya in Delhi Live in Fear of Deportation

Though the conditions in the camp they live in are terrible, they say it is still far, far better than the alternative. 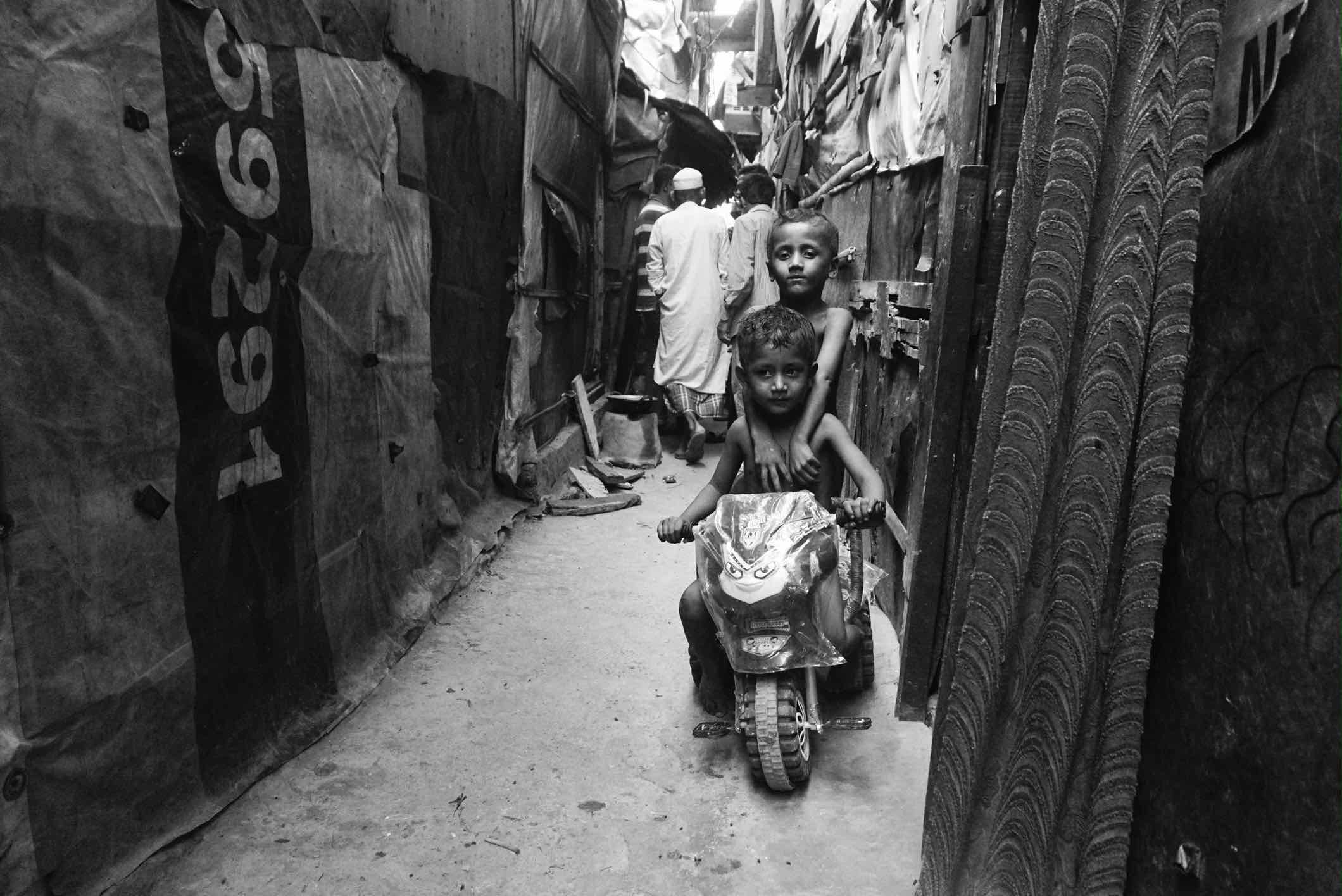 The word Rohingya is taboo in Myanmar – and recently it seems to be becoming the same in India. The Aung San Suu Kyi-led government has maintained that country’s long-held stand that the Rohingya are not Myanmarese but Bangladeshi.

Mohammed Salim, a refugee living in New Delhi’s Madanpur Khader area, near the banks of river Yamuna, told The Wire, “We prayed for Aung San Suu Kyi when she was under house arrest, we wanted her to come back, to be released and to make a new Myanmar. We never expected that she would make things worse for us and our community.”

Among the few thousands of Rohingya living in India, only 60 families are in Madanpur Khader. The Zakat Foundation has given them a place to set up their camp, and regularly helps them by providing food and talking to them about accessing education. Many of the refugees have been here since 2001. A few have learnt Hindi.

Recently, the Indian government changed its stance on Rohingya refugees. Kiren Rijiju, the junior home minister, said, “I want to tell the international organisations whether the Rohingyas are registered under the United Nations Human Rights Commission or not – they are illegal immigrants in India.”

“Why are Tibetan, Afghan and Sri Lankan refugees given shelter by Indian government?” a Rohingya refugee in Delhi asked. “If they get shelter, then why are we denied it?”

“If the government plans to send us back, it is better for us to commit suicide rather than being killed by Myanmarese authorities,” the refugee said.

Another refugee, Anwar Shah, pulled out his ‘stay visa’. “When I and many others here have the required papers, why are they still thinking of taking steps against us?” he asked. Among the 60 families in the area, many have had children in India.

Mohammed Salim has filed a petition in the Supreme Court, challenging the government’s decision to deport the Rohingya people from India.

While going “home” means risking their lives, life in India isn’t easy either. Sanitation standards are terrible in the Madanpur Khader camp and the dark rooms are too small to host even four people. The rooms include a makeshift kitchen, where they use coal or twigs to create a fire. The smoke is always lingering. Since the river is at close proximity, snakes and other reptiles move around freely. Going to their community toilets, crossing slippery water supply areas, is quite dangerous. However, they say they can deal with all this for now, what they can’t deal with is deportation.

“The Rohingya are fleeing from Myanmar to avoid a genocide, but the Indian government is pushing them back towards the genocide,” a refugee at the camp told The Wire, her eyes brimming. 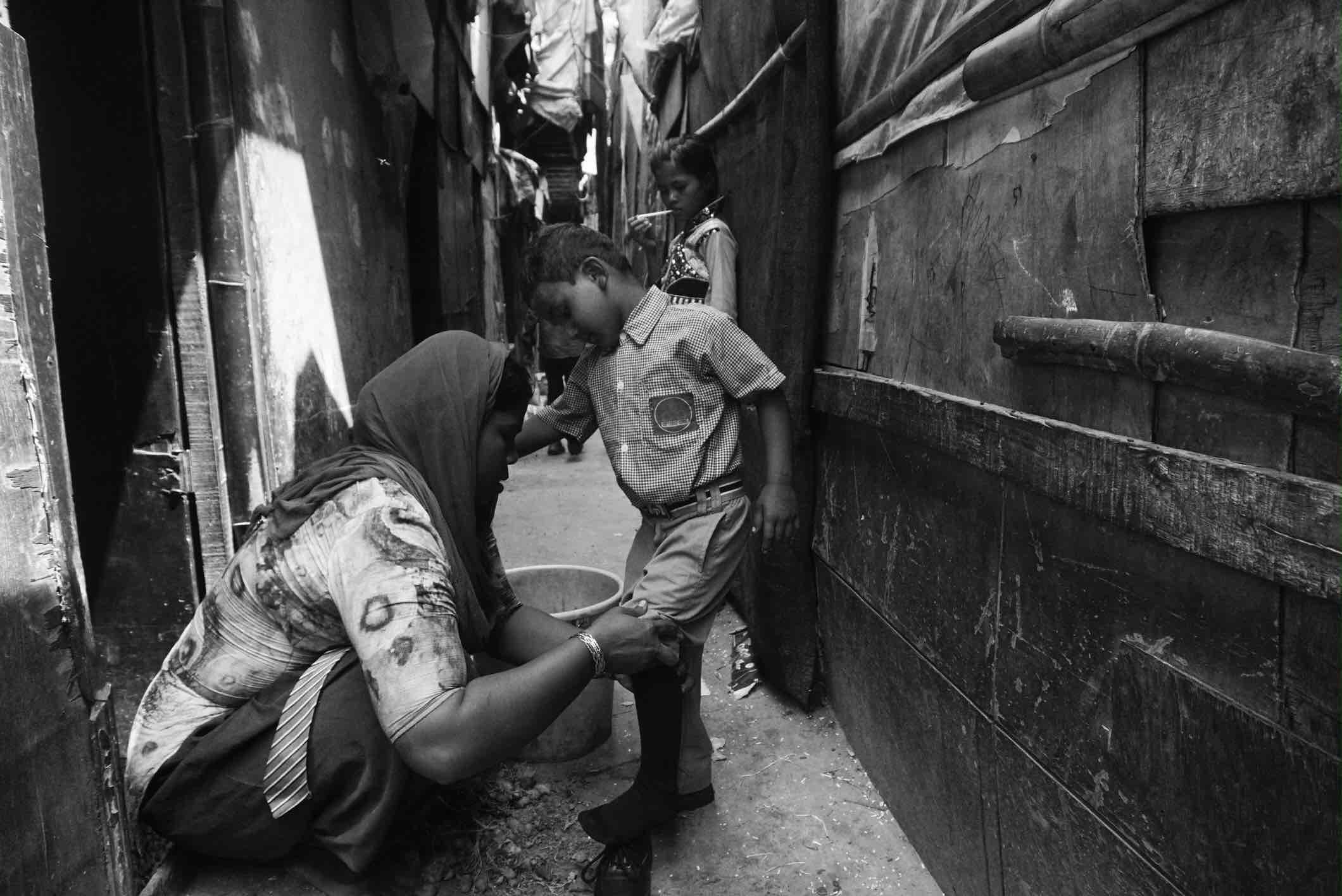 A child with his mother after coming back from school. 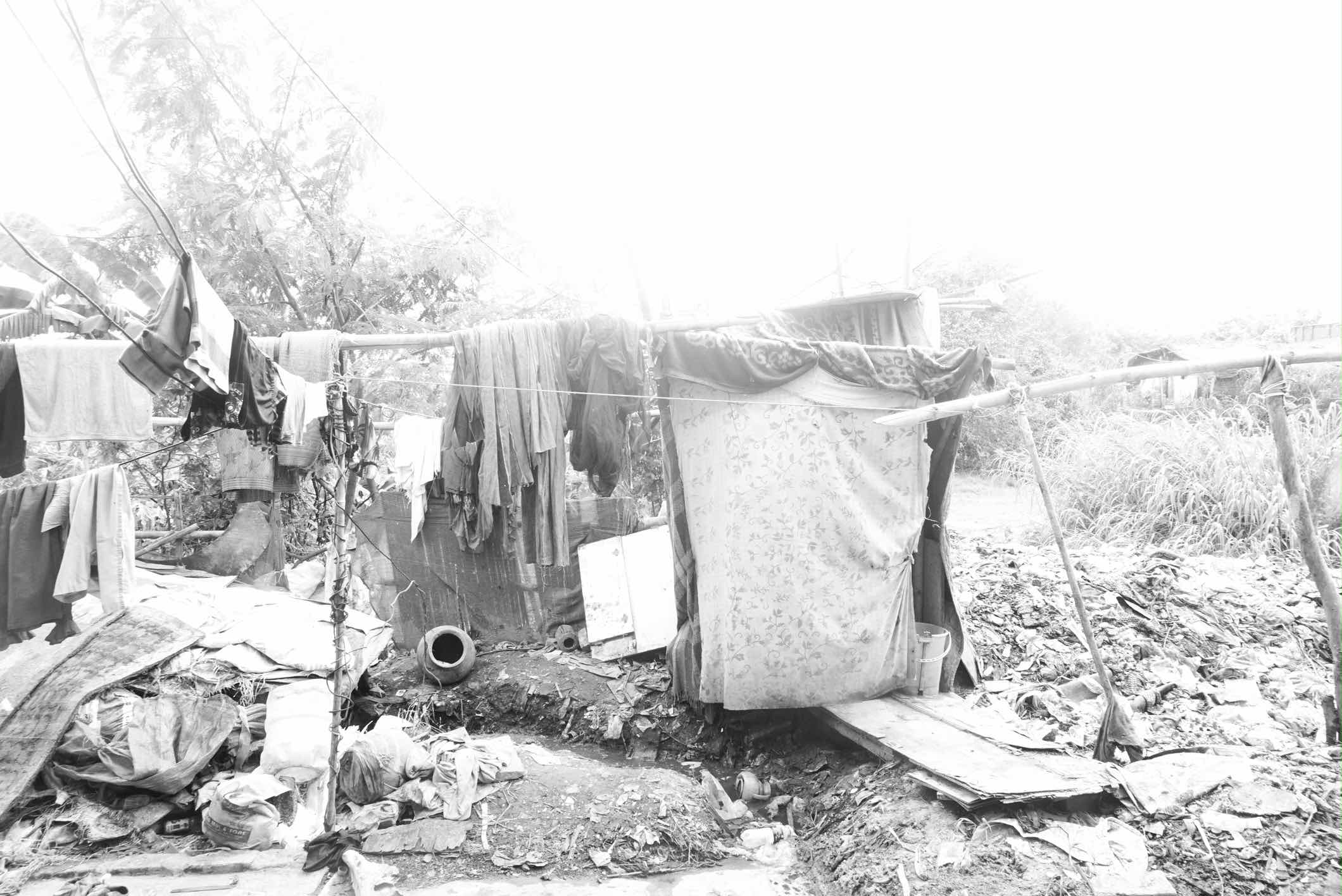 Makeshift toilet in the camp, where reptiles are often found. 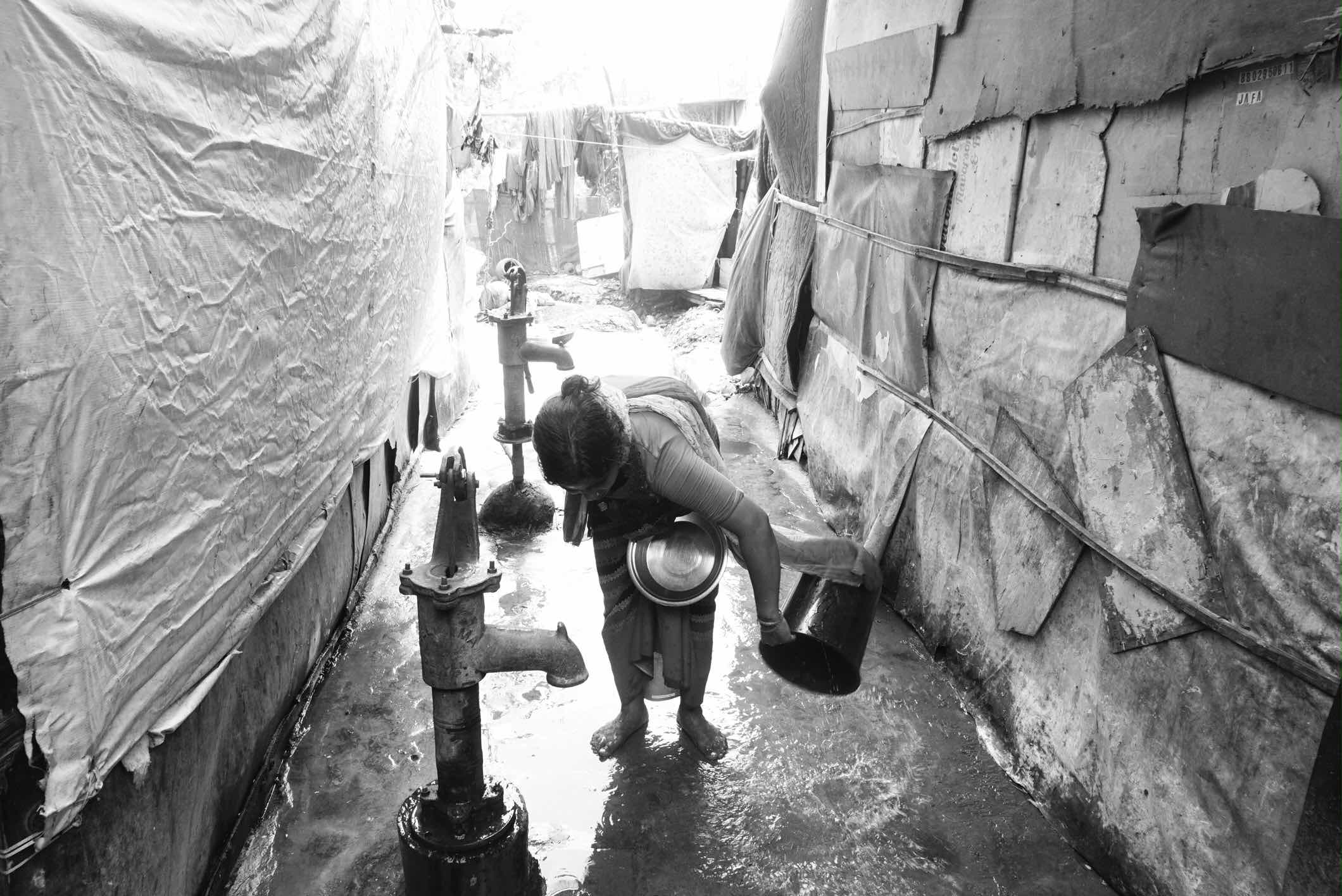 The water source in the camp. 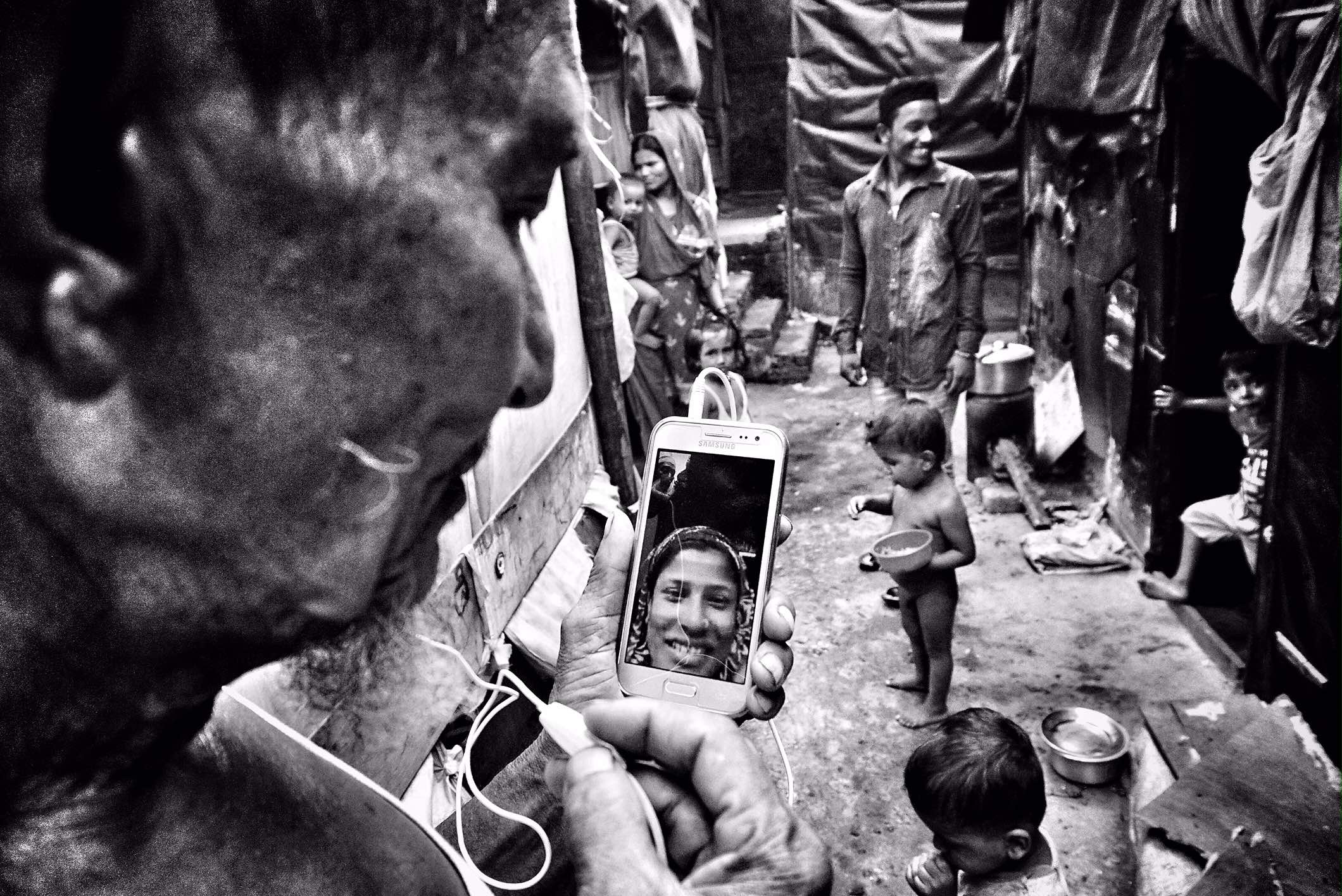 A man talks to his niece who is still in Rakhine State and fears for her life. 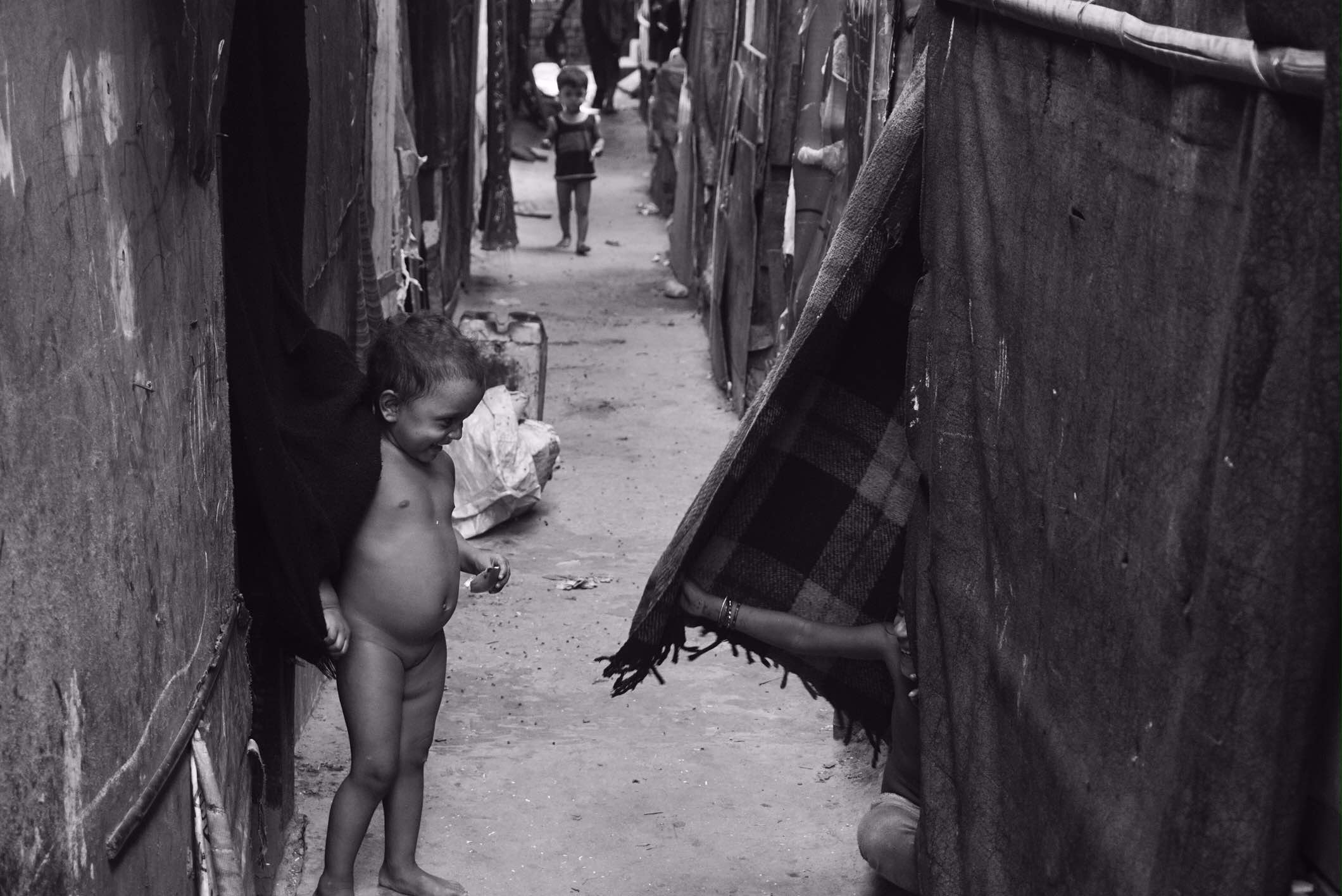 Children playing in the thin alleys of the camp. 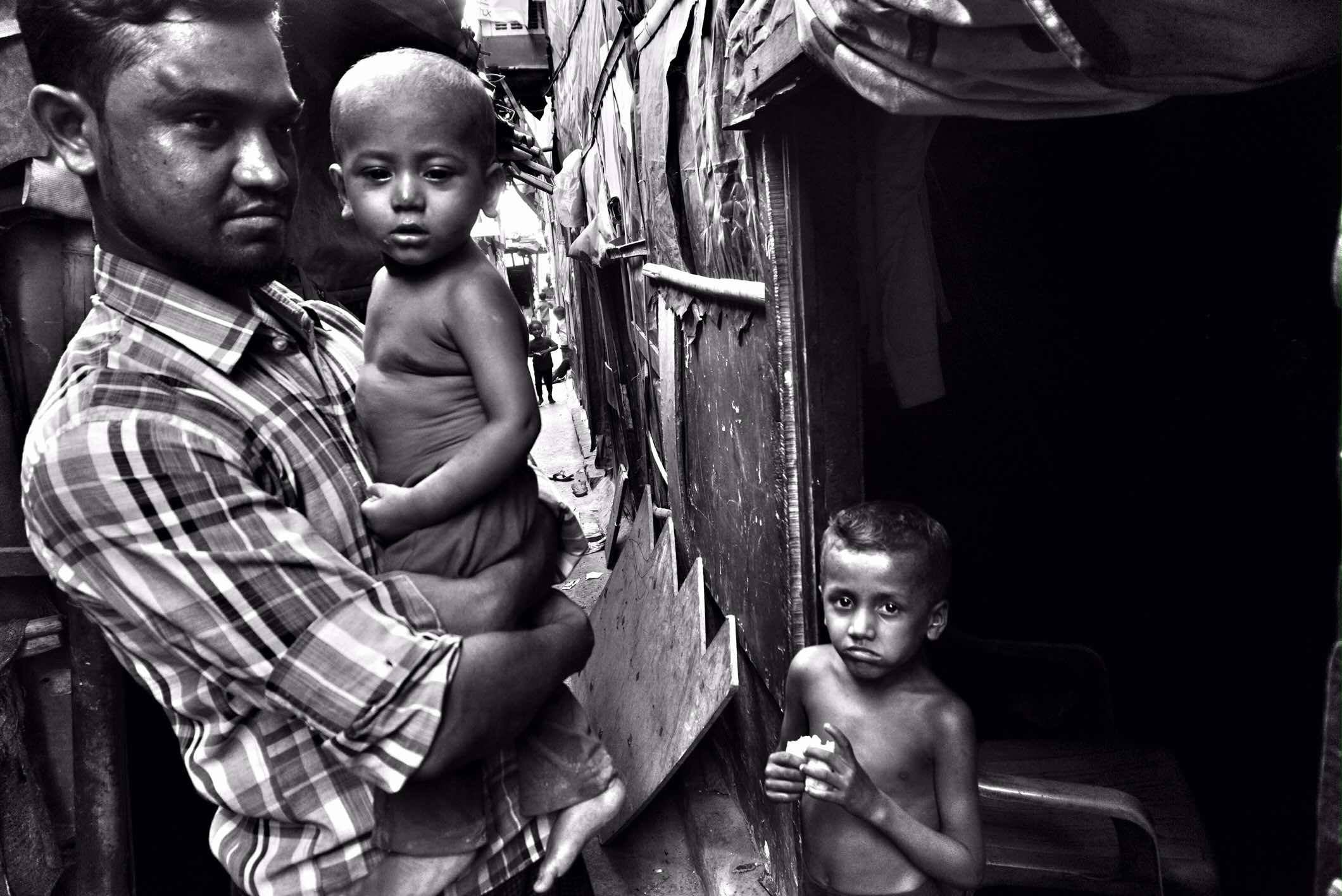 Anwar Shah and his family members have long-term visas, but don’t know if they will count for anything. 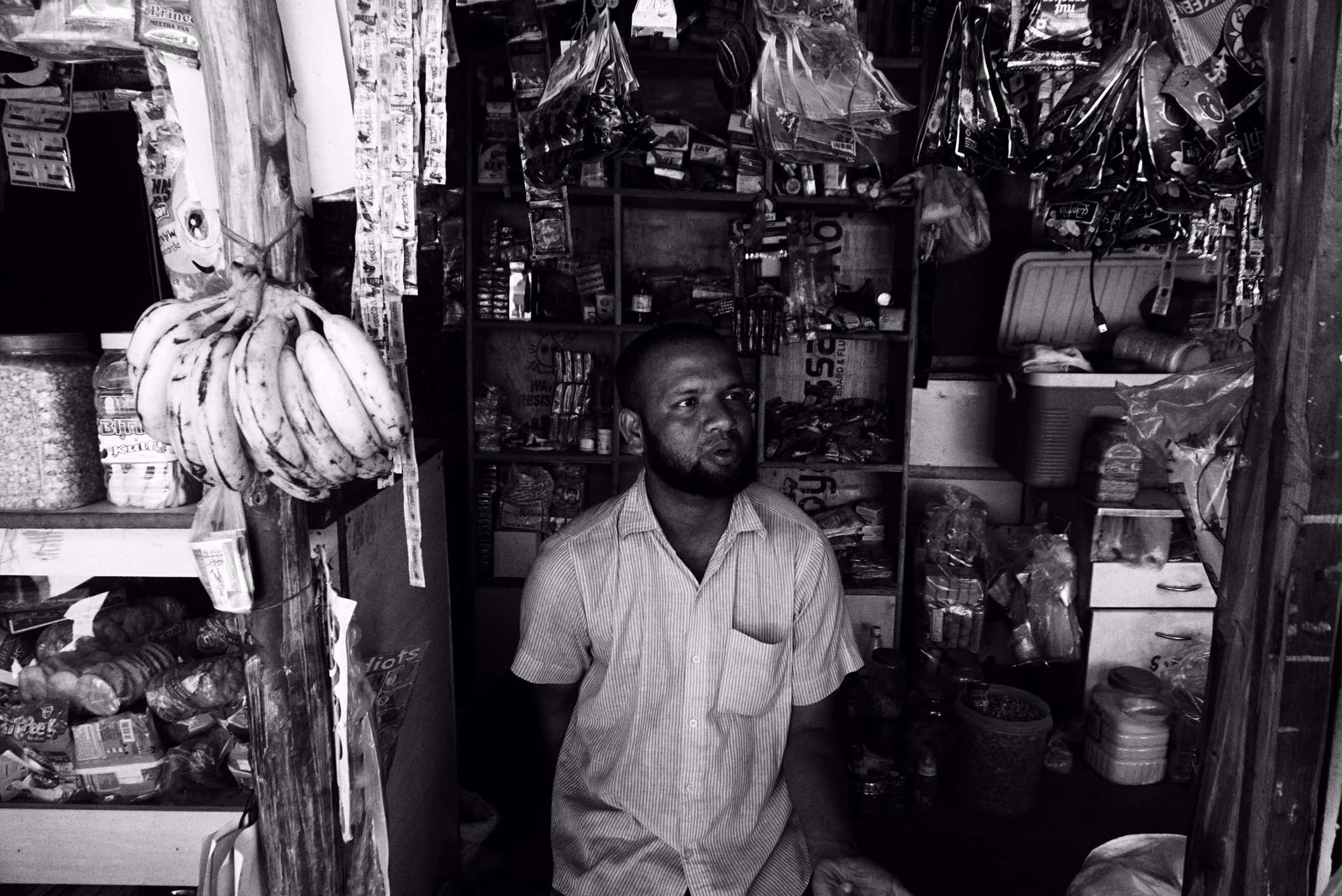 Mohammed Salim filed a petition in the Supreme Court against the deportation of Rohingya people. 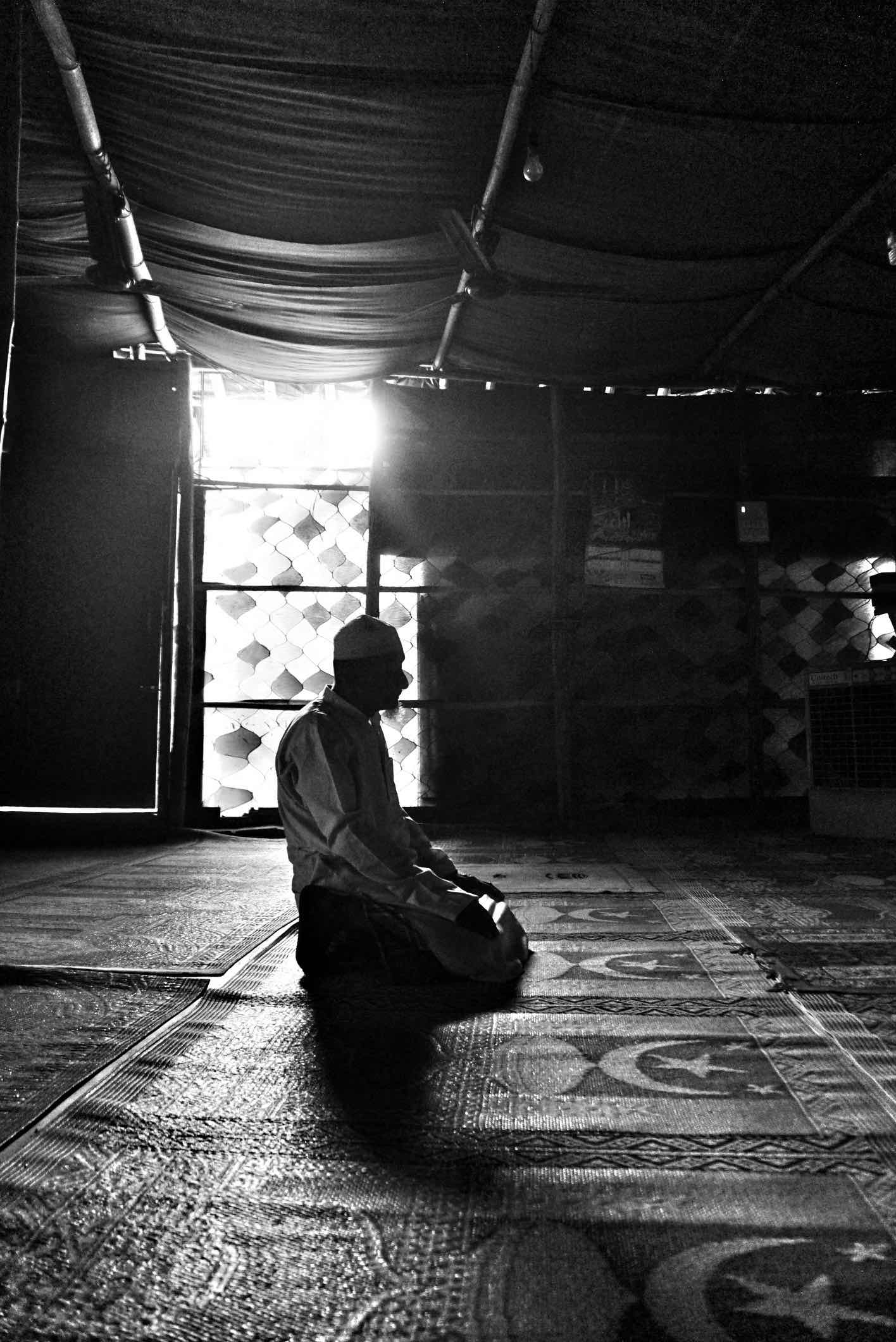 The mosque in the Madanpur Khader camp. A mother and child and the camp in Madanpur Khader. 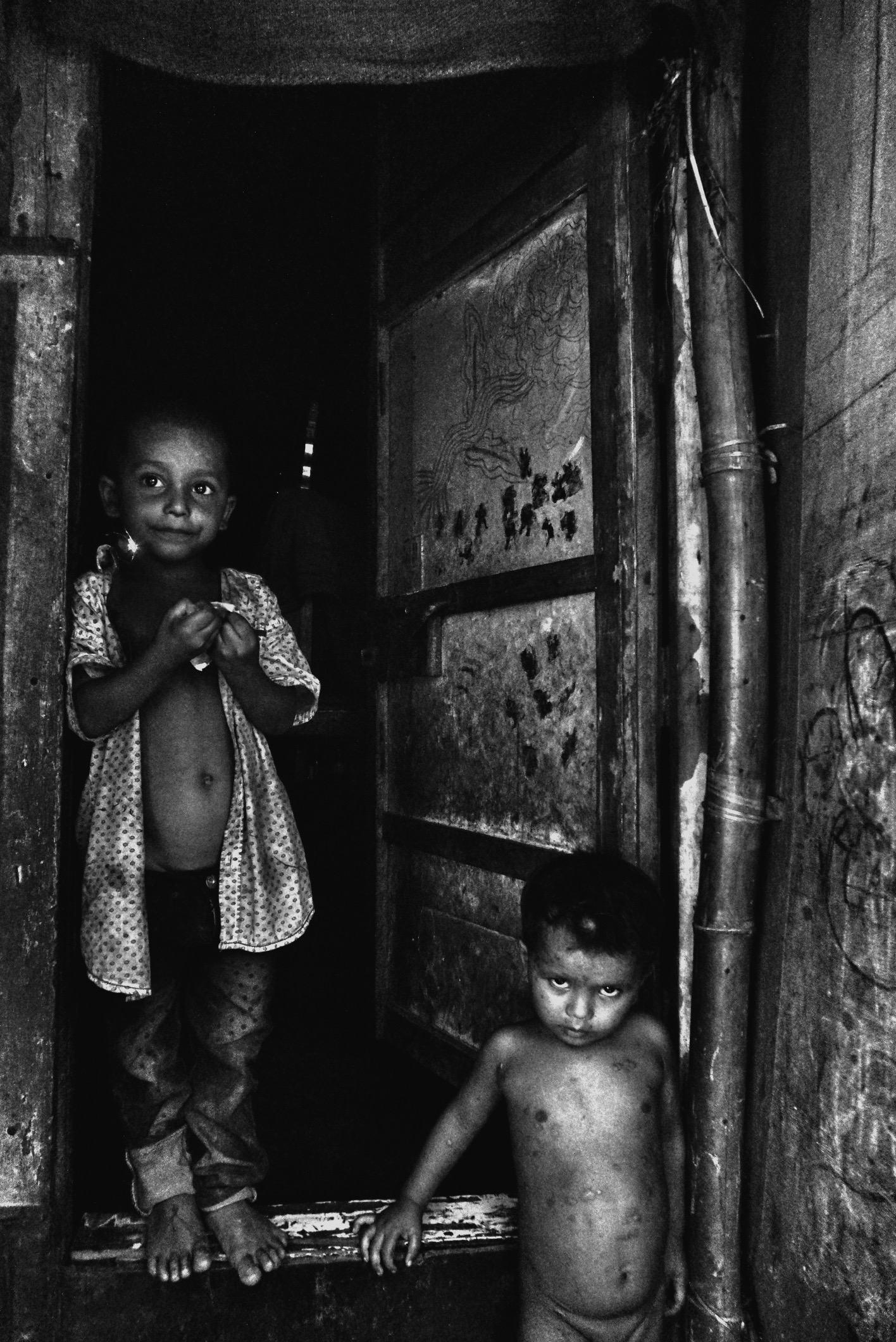 The smell of smoke from clay ovens makes the air heavy. 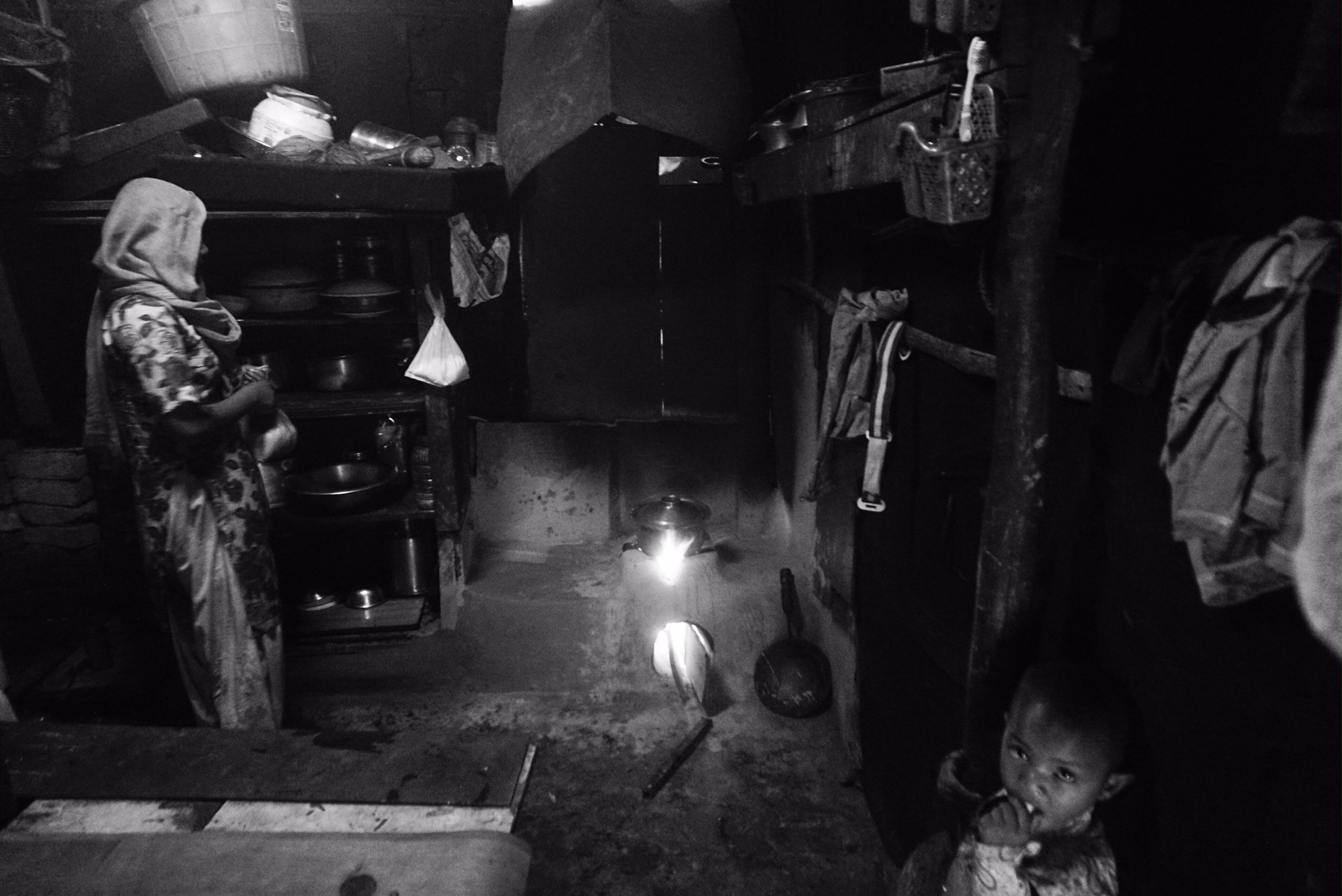 Inside a home in the camp.

All images by Shome Basu