'Rocket Boys' Begins Well, Then Turns Into Hagiography With a Blatantly Communal Touch

The makers could not resist becoming hagiographic and going the easy way of falling in step with anti-minority narratives. 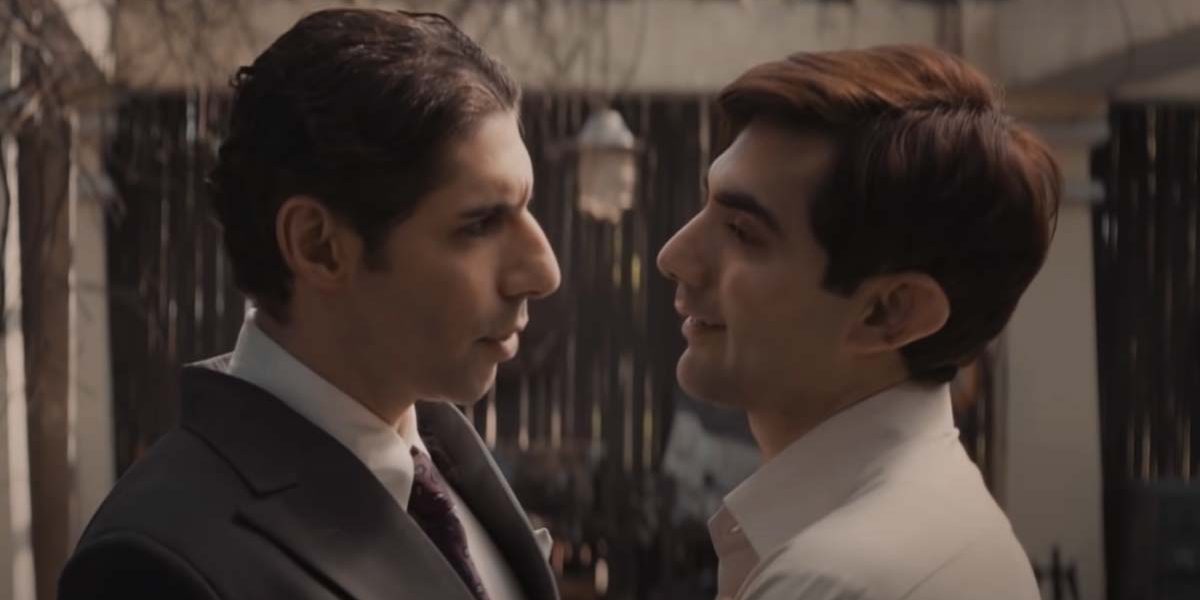 A still from 'Rocket Boys'.

An early scene in a new SonyLIV series, Rocket Boys, features two renowned Indian scientists – C.V. Raman (Karthik Shrinivasan) and Homi Bhabha (Jim Sarbh) – bantering with each other. Where: Indian Institute of Science; when: 1940. The third person in the library, much younger than them, stays in the background, awed by the company, humbled by the occasion. He’s come for an interview and, in the coming years, will himself become a much celebrated figure: Vikram Sarabhai (Ishwak Singh). The country’s “tryst with destiny” is still a few years away, but its sharpest minds have begun to work – and smile – together.

Such scenes are rare in Hindi cinema, for it has historically shared a quasi-antagonistic relationship with the spirit of scientific inquiry. Academics are stereotyped as insufferable dweebs, cast as college toppers or professors, who merely spotlight the fuss-free hero. Bollywood has also derided classroom teaching for long, equating it with ‘authority’ that the hero ‘defeats’ through creative means. Such dramas don’t have patience for a considered engagement with science, either. These simplifications make sense in an escapist filmmaking world: Scientists don’t have glamorous jobs, masculine magic or romantic charm. Or, well, they’re not ‘entertaining’ – and useful – enough.

Also read: Book Review: In a Sea of Indian Men, Why Everyone Is Seeking Shah Rukh

Even though the biopic has exploded as a sub-genre in Hindi cinema over the last decade, profiling a vast range of sportsmen, leaders, even gangsters, it has paid scant attention to Indian scientists. Such depictions are so rare that I remember watching something similar almost eight years ago (a National Award-winning documentary, The Quantum Indians, chronicling the lives of Raman, S.N. Bose and Meghnad Saha). So, Rocket Boys, centred on the personal and professional lives of Bhabha and Sarabhai, is a fresh and long-due departure.

Created by Nikhil Advani and written and directed by Abhay Pannu, the SonyLIV series starts on an impressive note. Bhabha and Sarabhai have strong, distinct personalities, informed by their cultural and societal differences, unfolding as a mini-story of the elites in pre-independent India. Both belong to privileged families, but several crucial differences set them apart. Bhabha is cynical, Sarabhai sincere. The suave Bombay boy is more comfortable in English; Sarabhai, from Ahmedabad, slips into chaste Hindi. Bhabha, a renowned scientist by the early ’40s, carries an air of smooth confidence; Sarabhai, still making his mark in the scientific world, is hesitant and conscious. Two distinct people but one unifying mission: making India a scientific superpower.

The first two episodes have other admirable merits. The acting is consistently credible. Singh shines as Sarabhai, sharpening his strait-laced persona (last seen in Pataal Lok). Sarbh, as a funny acerbic scientist who can be both compassionate and petty, turns in one of his best performances – the kind of portrayal that again, at the level of both writing and performance, is quite uncommon to Hindi dramas. Singh and Sarbh also share excellent chemistry – a great example of good old ‘bromance’, so much so that when they have their first major fight it almost looks like a break-up.

The writing, too, illuminates and entertains: the academic portions are not dumbed down. Sarabhai and Bhabha’s eccentricities make them accessible and endearing and a constant undercurrent of humour elevates our intrigue. The production design stands out – the old eras and scientific settings are recreated with determined realism. Sharp cinematography and editing give the first two episodes a pleasant rhythm and tone, and compelling consistency. The long passage of time, from 1940 to the mid ’60s, simultaneously telling the story of a nation in transition, materialises with impressive control.

Sadly, that’s it. Because Rocket Boys commits the same mistake, again and again, as many Bollywood dramas: trying to make an already dramatic story more…dramatic. So, we have another scientist, Reza Mehdi (an impressive Dibyendu Bhattacharya) who, in the subsequent episodes, keeps getting more ‘villainous’ to magnify Bhabha’s stature. It’s desperate and contrived screenwriting because, barring few scenes that attempt to make sense of the man, there’s not much to him. This ugly Bollywood disease is as off-putting as it is old: an obsession with ‘defeating’ someone to make the hero look superior, sullying the pure and sublime thrill of intellectual pursuit. (It’s no surprise that, unlike Bhabha and Sarabhai, Reza is fictional.)

Similar obsession with victory marks Sarabhai’s character as well. In an early scene, he abruptly proposes to a Bharatanatyam dancer, Mrinalini (Regina Cassandra), as she’s leaving for Madras on a bus. It’s the kind of scene we’ve seen many times before: an entitled hero proposing to a woman, disregarding her ambitions and desires. Almost all the time, it’s depicted as a romantic gesture, and the heroine is floored. Not here though. Mrinalini calls out Sarabhai’s self-absorption. Yet just a few scenes later, egged on by Bhabha, he makes a grand gesture again, almost negating her views. But this time she agrees. What changed? Rocket Boys provides no clue.

Later in the series, we get a subplot of Sarabhai wanting to modernise his father’s factories. This angers his old man, who says it would jeopardise his workers’ livelihoods. But Rocket Boys doesn’t tackle this segment with any nuance, painting Sarabhai instead as a ‘saviour’ who wants to rescue the poor and ignorant masses who don’t know any better. It also disregards the socio-political reality of a newly independent country – that a large portion of its working class was poor and fearful, taking first hesitant steps in a free modern world – in lieu of a rousing speech by Sarabhai which, magically, convinces everyone (including his father, without any substantial improvement in the arguments championing the change).

But a more discomfiting facet of the show emerges in the end of the fourth episode. On August 15, 1947, Sarabhai and Bhabha discuss their plans, their excitement, for a new independent India. They share a quiet contemplative moment, drinking and looking at the national flag. It’s an excellent scene that has pitch-perfect tenor, nailing the true essence of patriotism. On the same day, however, it cuts to a mosque in small-town Tamil Nadu. A few Muslims are whining about their disadvantaged status in the new country. The Hindu and Parsi characters receive the same news with glowing optimism – thinking about the country’s future – while the Muslim characters have been reduced to petulant whiners, who can’t think beyond themselves. (It’s important to note that, in the first episode, Bhabha explicitly disapproves of Reza’s politics, saying he supports the Muslim League.) But this already bad scene turns worse, for there’s a young boy – a ‘good’ Muslim – who makes his elders reflect. Who is he? Take a wild guess. A.P.J. Abdul Kalam (Arjun Radhakrishnan), of course!

From the fifth episode onwards – right from its first scene – Rocket Boys goes into a full-on hagiographic mode with respect to Kalam. The trailblazing guy can do nothing wrong. A recent college graduate, lacking stellar credentials, he is interviewed by Sarabhai for a job. Kalam comes across as a maverick – an eccentric genius – who proudly includes a long list of rejections on his résumé. In fact, he almost schools Sarabhai on not following his dream, then rejects the offer that hadn’t even materialised. Sarabhai, somehow propelled by a sudden realisation, offers Kalam the job, coaxing and flattering him. It’s a bit…much.

This needless sentimentality is, quite fittingly, accompanied by blatant insecurity in the final episode, where an American journalist, questioning the launch of India’s first rocket (helmed by Sarabhai), is first castigated by Kalam, then by an Indian journalist. Some of the conversations between Jawaharlal Nehru (Rajit Kapoor) and Bhabha, where Reza is treated as an inconsequential figure, seem like gossip sessions of neighbourhood uncles. There’s a painful attempt to connect the CIA, its spy in India (Namit Das), and a close associate of Bhabha’s, Vishwesh Mathur (K.C. Shankar), hatching up a vicious plan. (Vishwesh, like Reza, is of course fictional.)

Web series can be sloppy in different ways, but I struggle to remember a drama that got worse with each subsequent episode. Great achievements deserve great art, but Rocket Boys fizzles out in its flight.