Anjum Altaf’s renderings are elegant, and often melancholic, exploring Faiz as a poet of solace for those licking their wounds in the aftermath of inevitable injustices.

“Not even dogs
Go as quietly as these men

The nightmare unfolding on Indian highways through the abruptly-imposed ‘lockdown’ – of migrant labourers, rejected by the cities they served, walking hundreds, sometimes thousands, of kilometres home to their villages, often without food and water, under the hot, unsparing sun of the Indian summer – reminds us in stark visuals of the cruelty of visited by one class of humans on another.

A cursory look at history reveals that such cruelty is hardly new. ‘Why’, the opening poem in Transgressions, Anjum Altaf’s collections of poems inspired by Faiz Ahmed Faiz, continues thus:

Faiz’s poem, ‘Kutte’ (Dogs), from which Altaf’s poem is inspired, is more abrupt and forthright in saying that if all dogs were to unite in their misery, they would overthrow human rule in no time.

Dreams of revolution have accompanied us since the time there has been institutionalised oppression. Actual revolutions have taken place and sometimes turned into even worse oppressions themselves. Does history simply repeat itself endlessly or is there some kind of progress through time?

The challenge for those who fight on the frontlines of suffering, or even those who just empathise, is to be able to stand spectacles of sorrow which mind cannot comprehend and throat cannot swallow. And yet there is beauty, love and truth in the world. How are these to be reconciled? Faiz’s poetry is constantly in the thorns of this dilemma. 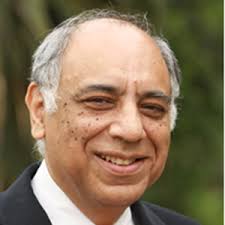 Faiz re-entered mainstream consciousness in India in light of the anti-CAA protests that convulsed the country at the beginning of the year, through his poem ‘Ham Dekhenge’. This poem became a rallying point for protestors and a point of attack for supporters of the act. The poem promises an eventual day of justice, when we shall at last witness (‘Ham dekhenge’) the ascendancy of the oppressed, and the decimation of the oppressors:

Will we in our lifetimes witness such a day? Perhaps each generation has asked itself this question. Faiz is often described as the poet of revolutionary hope. In the poem quoted above, he’s attacking General Zia-ul-Haq’s repressive regime, promising it won’t last forever (it didn’t; but other regimes replaced it).

In the introduction to his book, Altaf says that poems by Faiz would often spring to his mind and his lips at critical moments in the history of his own time – bombings at the Stade de France in Paris, the lockdown of Brussels, the attack on young students inside the JNU campus. Poems become commentaries on events – ways of dealing with news that is often too disturbing to digest ‘rationally’. Faiz’s poems, having played this role for Altaf, inspired him to re-interpret the poetry for his own time, in English. He calls his poems not ‘translations’, but ‘transgressions’. 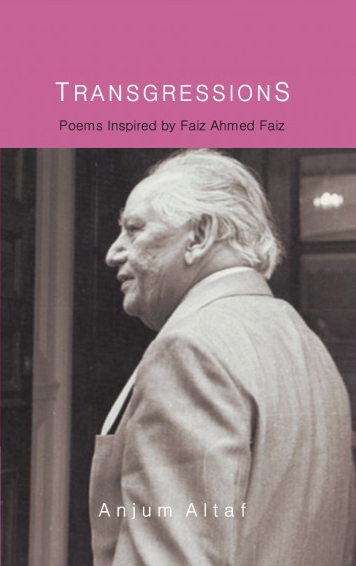 Altaf’s renderings are elegant, spare, and often melancholic, without the fire with which Faiz’s Urdu poetry is bursting. They give us a different point of entry into Faiz from the usual one – Faiz is not only to be ‘used’ as a rallying cry for activists (as Kabir is sometimes ‘used’ to invoke ‘Hindu-Muslim unity’); rather, Faiz is experienced as a poet of solace for those licking their wounds in the aftermath of inevitable, overwhelming injustices.

Faiz himself was imprisoned for four years in newly-formed Pakistan in the early 1950s, supposedly for his participation in a failed plot to overthrow the government. He wrote a lot of his poetry in prison. One of the most successful of Altaf’s ‘transgressions’ in this collection is the poem which he titles ‘Hope’, based on Faiz’s ‘Kahaan Jaaoge?’:

“There are times
When everyone, everything, exists for itself
The moon refuses to share its light
Stars recede into their black holes
Mirrors swallow their images
Even lovers fail to turn up for their trysts”

This darkness – the images of mirrors swallowing their images or lovers failing to keep their trysts are powerful ones – is relieved almost immediately:

Perhaps Faiz’s recognition and invocation of a higher force – call it nature, or life itself, or ‘anal-haq’ as in ‘Ham Dekhenge’ – is not as well remarked on as his revolutionary cries. This force is what guarantees that no oppression lasts forever, that the experience of love – whether human or larger-than-human – is a constantly-renewing well. In his poem ‘A Prison Evening’ (not translated in this collection), Faiz famously says (in Agha Shahid Ali’s famous rendering):

“This thought keeps consoling me:
though tyrants may command that lamps be smashed
in rooms where lovers are destined to meet,
they cannot snuff out the moon, so today,
nor tomorrow, no tyranny will succeed,
no poison or torture make me bitter,
if just one evening in prison
can be so strangely sweet,
if just one moment anywhere on this earth.”

This experience of epiphany, of an evening in prison, for Faiz – and hopefully for us – points to the continuing triumph of love over brutalities. The sweetness of the original Urdu – “Itni shireen hai zindagi is pal” – conveys this impression even more strongly.

There is an enduring tension in Faiz’s verse between the beauty of love (an abiding subject of traditional Urdu verse) and oppressive social reality. In his famous nazm, ‘Mujhse pehli si mohabbat’, he meditates on this:

A lot of Altaf’s lyrical renderings resolve this dilemma in favour of a tender acknowledgement of love, even in the face of howling angst. I see this as a tribute to Faiz the poet, not just Faiz the revolutionary. Altaf’s renderings of the more personal and tender poems succeed better than those of the overtly political ones. Altaf’s turn of phrase here is often natural, felicitous and fresh, as for instance in the poem titled ‘Love’:

The hope which springs eternal in the human heart – perhaps more intractable even than oppression and suffering – is never far from Faiz’s poetry, along with the unwavering, uncompromising gaze. Altaf takes a leap into this dimension in one of his transcreations of Faiz’s ghazals.

“We have fallen on bad days, it’s true
Love, beauty, truth, all lie askew
But what of that, but what of that
One day the buds will bloom anew
Were I to listen to my head
Won’t we be as good as dead”

This ever-renewing leap into something that is beyond the agonies of the present moment is often one of the characteristics of children’s responses to sorrow. Perhaps this is part of what makes Faiz’s poetry timelessly enchanting. The poet Nida Fazli says:

(Do two and two always add up to four?
Give some guilelessness, O lord,
To those who are entirely sensible.)”

Vipul Rikhi is a poet, Kabir singer and author of One Palace, A Thousand Doorways, a book of translations of mystic poetry from South Asia.