Remembering Kumar Gandharva, Who Brought Hindustani Classical Music Back to Its Original Ethos

The singer who refused to be bound by tradition has left behind a vast body of avant-garde music, which even a quarter century after his death, remains a matter of searing debate in music circles. 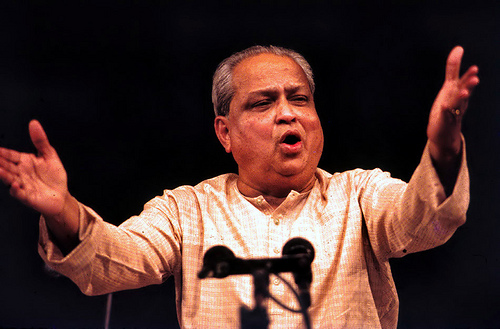 “Art” said the famous American sculptor Leonard Baskin “is man’s distinctly human way of fighting death.” Pt. Kumar Gandharva, the maverick vocalist who blazed the Hindustani classical music trail, shattering tradition with his stunningly original musical syntax, died 25 years ago on January 12, 1992. But his vast body of avant-garde music has conferred him with a kind of enduring veneration that few artists enjoy posthumously.

Some of that adoration was visible in Dewas earlier this month, where a two-day commemorative festival called Anhad saw poets, singers, actors and art connoisseurs from across the country descend upon Bhanukul – Gandharva’s atmospheric home in Malwa where he spent a better part of his life as a performing artist, drawing intimate influences from the region’s rich folk culture.

The sprawling mansion lies at the foothills of Mata Ki Tekri, a conical hillock that houses the temples of the goddesses Chamunda and Tulja Bhavani. Large black and white photographs of the man hung from the shadowy trees that abound Bhanukul’s environs.

The audience at the second day of the commemorative festival Anhad held in memory of Pt. Kumar Gandharva’s 25th death anniversary at his residence Bhanukul in Dewas, Madhya Pradesh. Credit: Nikhil Inamdar

It was a day when India celebrated Sankranti and Bihu, Pongal, Poang Lum and Uttarayan, the festivals of harvest that mark winter solstice across the country. A gentle breeze blew a kite into the open venue as Kalapini Komkali lent her rich vibrato to her father’s folk composition Aapke Bulawa… The scene was poetic enough to appear choreographed.

“He’d composed this on a whim, when, unexpectedly, an old friend invited him home after a long interlude,” Komkali later told me.

It was the simplicity of everyday life in and around the villages of Malwa that endlessly nourished Gandharva’s creativity. Tired farmers taking shelter under the expansive medlar in his garden as they returned home from the Friday market inspired Rukhwa tale, a composition in the afternoon Raag Madhyamad Sarang. 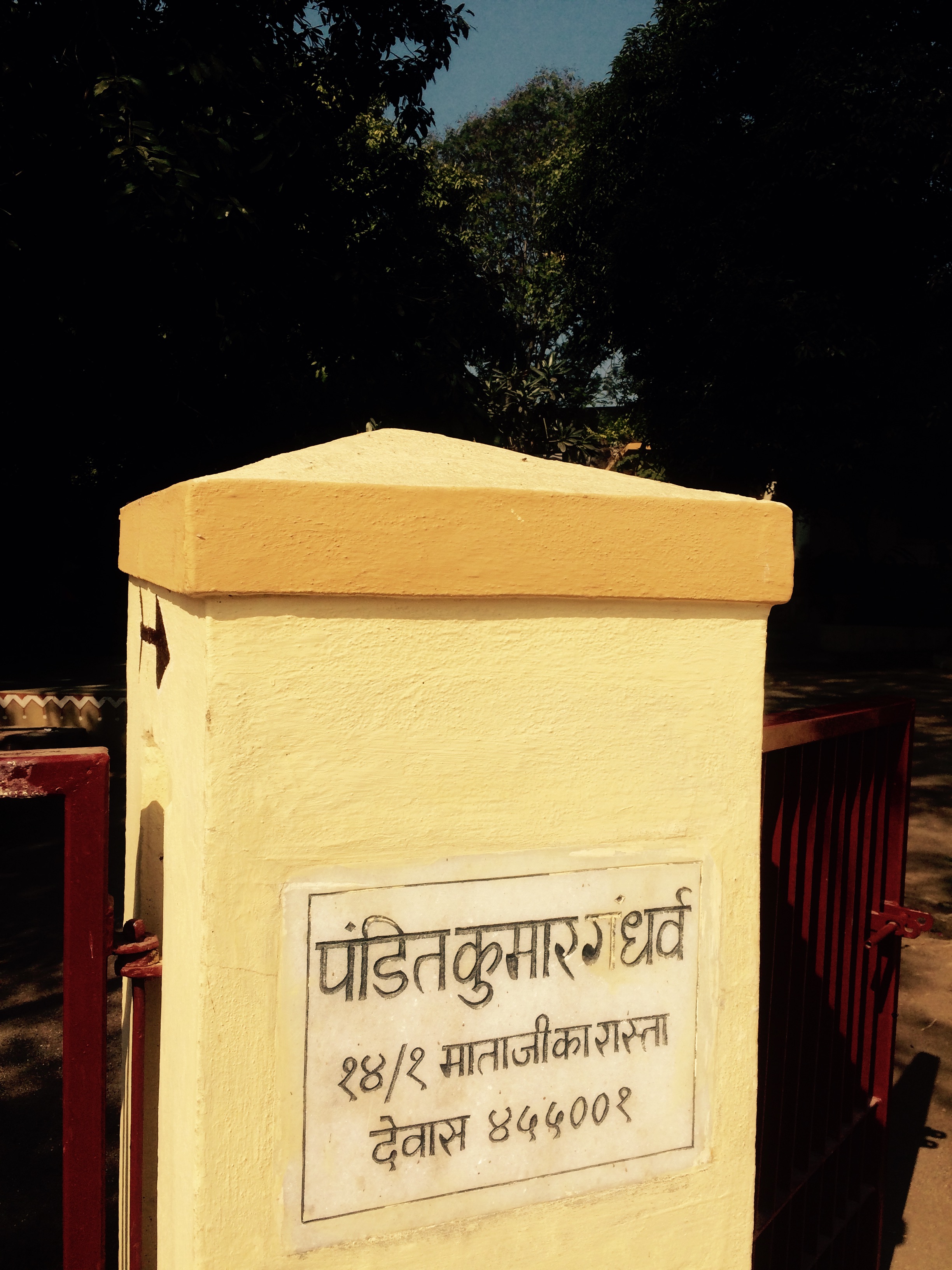 Once while passing a small hamlet called Binjana on his way to a concert, he wouldn’t stop thinking about how beautifully the word rung on his lip, and so he wrote Binjana Sughari.

Similarly, even when composing Kabir’s Jhini Jhini Bini Chadariya, he is known to have spent days with a weaver, carefully absorbing the sound of his loom.

It was this deep, brooding absorption with the origins of saints in and around the rural life of India that furnished his nirguni bhajans with a pure, minimalist intensity.

Quite antithetical to the slurring and garble that defined Khyal singing’s indifference to poetry, Gandharva’s forceful accentuation of words and the strong emphasis on literature and philosophy, also became, in many senses, one of the defining qualities of his music. “He freed us of the saas, soutan, piya obsession of classical bandishes,” said Pt. Satyasheel Deshpande, a noted vocalist and Gandharva ‘s foremost disciple. His music, it is widely acknowledged, is a triveni sangam or triad of sur, laya, and bol.

Born Shivaputra Siddharamayya Komkali in Sulebhavi near Belgaum, Gandharva was an undisputed child prodigy, whose musical genius was recognised long before he’d even entered his teens or had given a public performance.

By the age of eight, the boy was flawlessly reproducing the khyal records of reigning maestros such as Ramkrishnabuva Vaze, Abdul Karim Khan, Faiyaz Khan and Kesarbai Kerkar. But it was at a music conference in 1936 in Bombay at the age of 12 that he truly mesmerised the discerning stalwarts of the Hindustani classical scene who sat rapt in attendance. His half hour rendition of Yaman Kalyan and Bhairavi sent the press into a wild tizzy and also led the eminent musicologist B. R. Deodhar to take him under his tutelage. 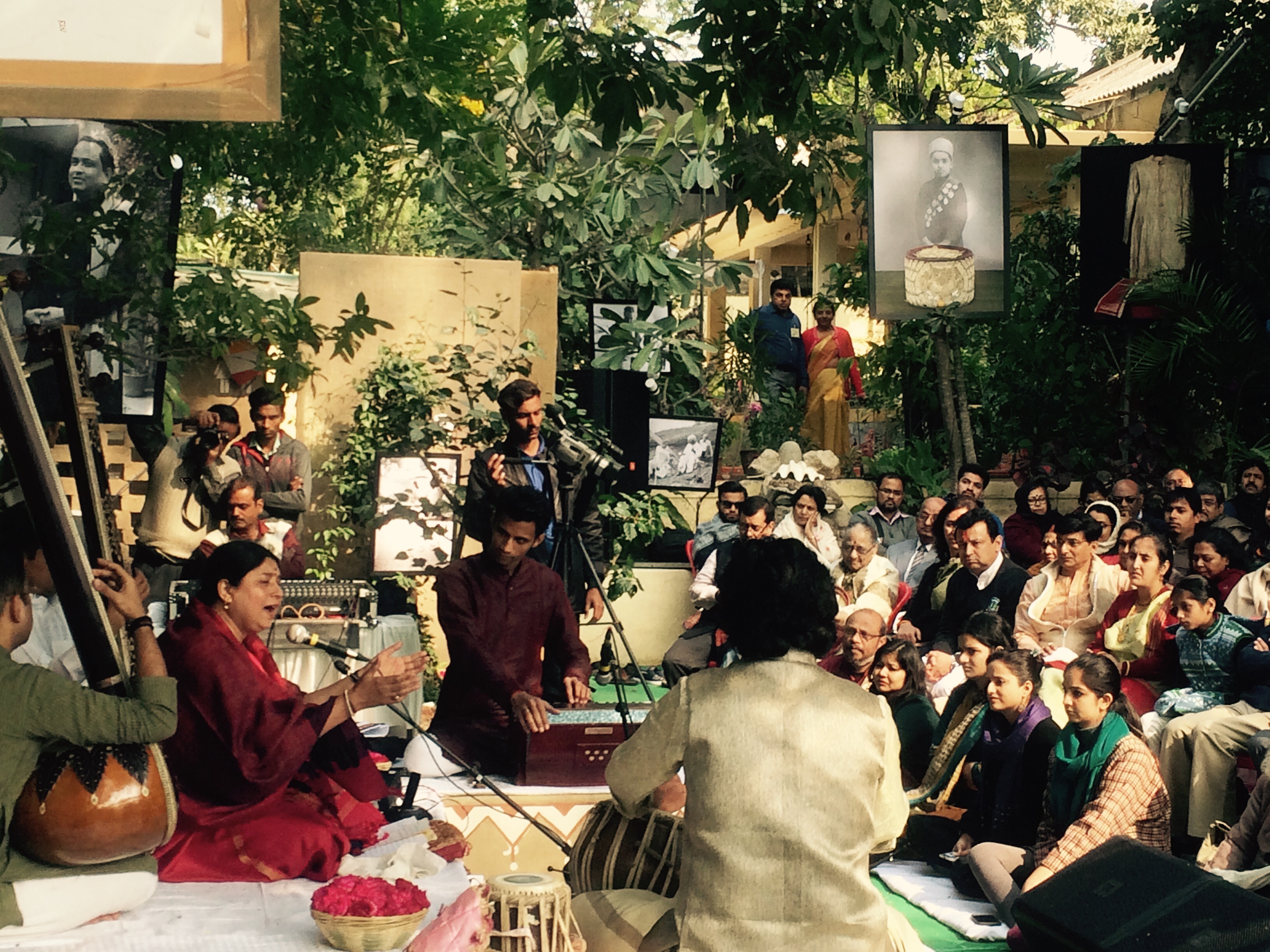 This fortuitous association, which lasted 14 years, would dramatically alter the course of Gandharva’s life. If the boy was a natural rebel, his rebellion was carefully nurtured by Deodhar, who, unlike his contemporaries, shunned the rigid shackles imposed by the Gharana discipline, even while keeping his taleem steeped in Gwalior gayaki. “Kumar’s young and impressionable age and Deodhar’s scholarship and unconventional thinking were a fruitful combination,” writes noted critic Vamanrao Deshpande, in his book, Between Two Tanpuras.

He called the duo a well-matched pair.

Under Deodhar’s eye, Gandharva’s imitative character metamorphosed into a fiercely idiosyncratic style, which, even a quarter century after his death, remains a matter of searing debate in music circles. It won him both, a cult-like following and equally ferocious criticism.

His music is “novel in form and design and unorthodox in approach; it has sought to spurn the very concept of the Gharana, the tradition that once nurtured and fostered his genius”, said Mohan Nadkarni, a prolific musicologist and biographer to Pt. Bhimsen Joshi in an 1984 article for The Illustrated Weekly of India. 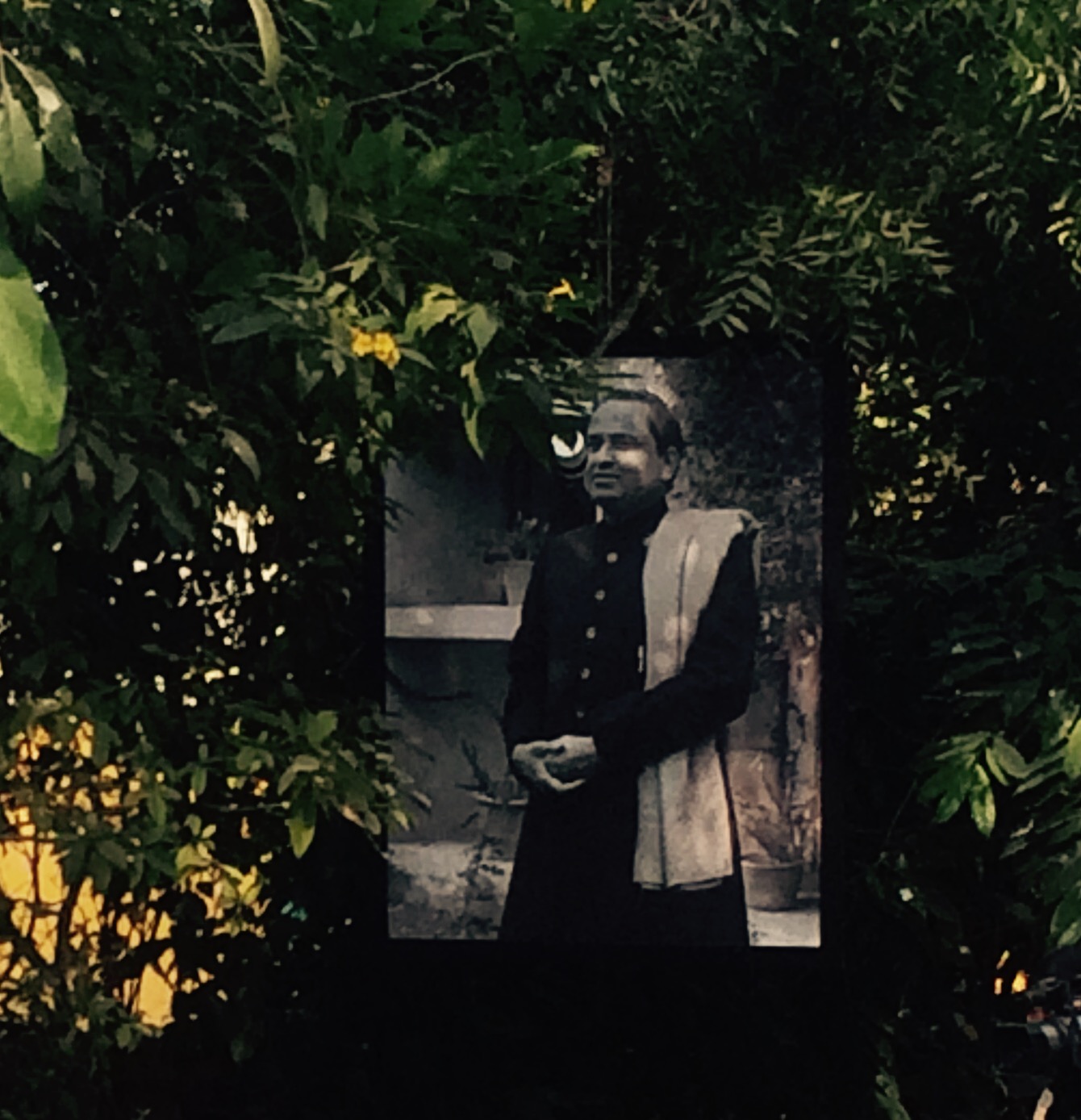 But quite contrary to his iconoclastic image, there are others who firmly believe he was in fact, the true classicist. “He merely rubbed off the thick layers of vermillion that had gathered on the idol over decades, to reveal what god looked like in his true form,” said Deshpande, speaking in metaphors during a lecture demonstration in Dewas. “He brought classical music back to its original ethos from the, straitjacketed dogmas of the Gharana.”

As a man concerned with wholes, his music was in many ways a conflux of Gharanas. As a teacher, he would show his pupils the Kirana approach to a note, which is a bit like a single point stroke, and also the Agra approach which is more a broad-brush technique. And then leave it to them to decide how they wanted to interpret it.

It created a whole new idiom that baffled listeners and critics alike.

The most succinct summation of the stupefied unsettlement Gandharva’s prodigious aesthetics aroused at the time came from Govindrao Tembe, a harmonium player and stage actor, who simply said Kumar remained but ‘a question mark in Indian classical music’.

Sharp, asymmetrical bursts, an emphatic throw of voice, short, crisp taans, a result perhaps of a grave illness that left him with only one lung, and in turn affected his tonal range, a preference for the medium tempo vis-à-vis the established norm of unfolding a raag at an unrushed, mellifluous pace are some of the strikingly obvious characteristics of Gandharva’s music. Yet, these apparent deviations from norm do not fully explain his phenomenal singularity and the distinct mood that his music had the ability to create.

“No other singer in the pantheon of Hindustani classical music but Kumar Gandharva crafted a voice that howled like the wind, carrying shades of joy, lament, love and loss, modelling it on the sounds of the folk music that he had introspected on for years. At times there is an awe-inspiringly eerie quality to the voice, which defies description,” writes vocalist Shubha Mudgal, in a sharply perceptive essay in Kaljayee Kumar Gandharva, a hardback volume on his life. “This aspect of Kumar Gandharva’s singing voice is not so much a result of endless hours of riyaaz, but is, in fact, a much deeper philosophical observation of, like nature, the vagaries of the human mind and heart, and a study of silence, symmetry and asymmetry.”

His crippling disease and a strict instruction by the doctors not to sing at the very peak of his prowess – which lasted five traumatic years and got him to Dewas in the first place – brought about a radical change in Gandharva. He became a seer, a student of life, absorbing, studying and silently introspecting about music to fill the void.

“It transformed him into an intellectual,” said Komkali. “These years gave him time to profoundly reflect. He began doing things for a reason. He sang, for example, mostly in madhya laya, because it dawned upon him that it was man’s natural pace, as also music’s. ‘How long can one either run or sleep after all’, he would say.”

It was also during this hibernation, when strains of folk music fell to his ear, that he came to a realisation that all classical music, in essence, found its origins in these primordial tunes. And so, when he sang them, he never altered them or set them to any particular raag, but rather found the perception to see that a raag was already hidden somewhere in the pore of each melody.

By the time of his death at 68 and despite having a life strewn with ill-health, personal tragedy and carping criticism about letting impulse and defiance guide his music, he’d built a prolific repertoire, collecting, as Nadkarni writes in his essay, nearly 300 folk songs and casting them in notation, establishing a totally new grammar to the bhakti bhajans of Meera, Sur, Kabir and others, constructing over a dozen original raags (including Gandhi Malhar, a tribute to the Mahatma) and sweeping the national stage with a stupendous array of concert presentations.

He even published a magnum opus of his work – Anoopraagvilaas – replete with notations to several invaluable bandishes, traditional and new.

For many, though, his towering achievement will remain his fearless attempt to bring Indian classical music back to its point of departure, from spontaneity inspiration and imagination – core constituents that make it the highest form of art anywhere.