Lessons for Our Turbulent Times from Kabir and Akbar

President Pranab Mukherjee has rightly reminded us about the plurality and diversity that are embedded in India's soul. His words echo what several others said centuries ago 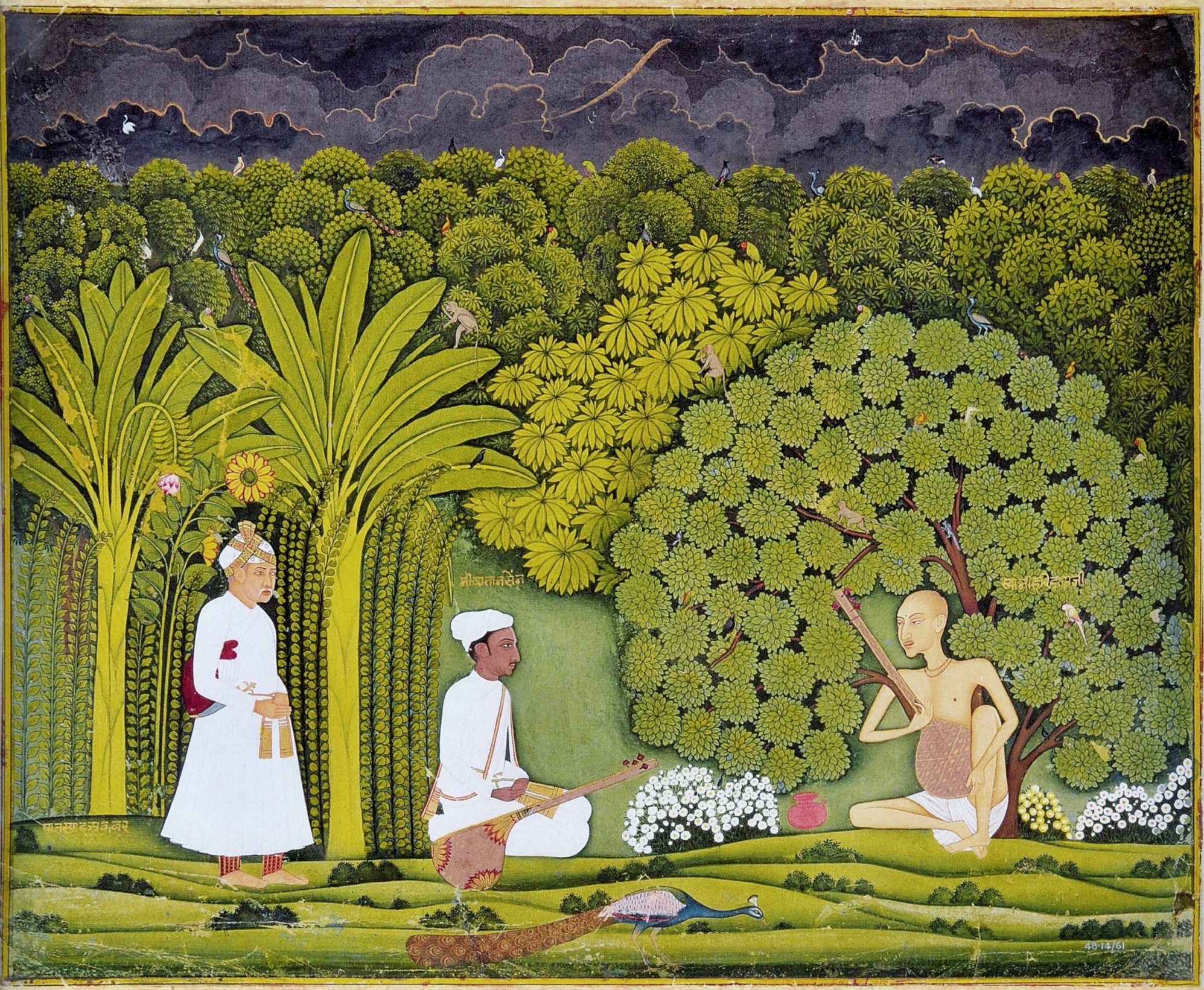 Emperor Akbar watching as Tansen is given a music lesson by Swami Haridas (Rajasthani style miniature.)

President Pranab Mukherjee has sagaciously reminded us that the soul of India rests in its diversity and plurality and compromising it can only be at India’s peril. His advice has the sound support of history. Here we take one episode from the past where similar concerns were addressed in the second half of the 16th century, when Akbar was the Mughal emperor.

Jalaluddin Muhammad Akbar, who ruled most of India for almost half a century between 1556 and 1605 was totally illiterate. But he had the innate inquisitiveness to question virtually everything and only a convincing reason would satisfy him. He questioned the use of several letters for the same sound in the Arabic alphabet, the inhumanity of child marriage, the denial of a daughter’s share in her father’s property, the treatment of sexuality as mere pious duty rather than a source of pleasure, but above all, he questioned denominational religion as the basis of legitimacy of the state.

Indeed, he firmly held that “truth inhabited every religion; how was it then that the Muslim community, which was relatively young, less than a millennium old, should receive preference at the expense of others?” The notion of any religion-based state would necessarily involve discrimination against other religionists. To seek a resolution between his quest of a common truth and religious discrimination, Akbar established the famous Ibadat Khana (House of Worship) where first the Ulama (Islamic theologians) and soon others – Brahmins, Jesuits, Jains, Zoroastrians – discussed the truth of their respective religions. In the end, Akbar arrived at the concept of sulh-i kul, universal peace, which would be entirely non-discriminatory.

Attributes of a great monarch

It was Akbar’s courtier, historian and counsel, Abu’l Fazl, author of Akbar Nama, who created the conceptual architecture of sulh-i kul. Clearly this was a total alternative to the concept of a religion-based state. Abu’l Fazl elaborates the qualities that mark out a great monarch. Lineage, collection of wealth, and the assembling of a mob are not essential for this rare dignity, in Abu’l Fazl’s words; “on coming to the throne, if the king did not establish sulh-i kul for all time and did not regard all groups of humanity and all religious sects with the single eye of favour and benevolence and not be the mother to some and step-mother to others, he will not become worthy of the exalted dignity.”

Already in the Islamic world, huge, stimulating debates were taking place on various facets of religion; many Sufi ideologues were enlarging the space that a dogmatic view of Islam had created. Mansur al-Hajjaj challenged it with his immortal assertion ‘an al-Haqq’ (‘I am the Truth, or I am God’) meaning Truth or God resides in each one of us and no one has a monopoly of it. Ibn al-Arabi postulated the notion of the unity of Being (wahdat al-wujud), which opened the way to pantheistic or multiple paths of approaching God instead of a hidebound one laid down by the theologians. At times even the authenticity of the Quran as divine revelation was questioned. There were also heated debates on the relation between reason and faith among intellectuals.

Back home in Akbar’s court, Faizi the poet, Abu’l Fazl’s elder brother, had expressed doubts about Islam’s claims to the finality of truth: “Wherefore diversity of practice in Islam? Wherefore allegories in the words of the Quran? If such be the truth of Islam in this world, kufr can have a thousand smiles”, he iterates in a poem. Abu’l Fazl was well up to date in these debates. His own intellectual evolution moved through several highways and by-lanes and their influence on him is evident. But one major influence seems to have been overlooked so far: that of Kabir, the great saint-poet of medieval India.

When Islam arrived in India, whether in the sermons of eminent Sufi saints like Muinuddin Chishti and others or at the tip of the sword of rulers or in the boats of Arab traders, it brought a concept of God and a form of worship that was a total alternative to ones prevalent in Hinduism. This would inevitably create avenues of both accommodation as well as tension, as happens in societies at the cusp of change. The society now had to deal with two competing concepts of God.

The Bhakti movement in medieval India found an unparalleled solution to this dilemma and Kabir, the saint-poet stood tall among its leaders. He conceived of one universal religiosity in place of competing denominational religions and one universal God in lieu of rival Gods. He asserts with immense power, “My one God is devoid of all attributes; He is neither Hindu nor Muslim; I perform no puja nor namaz; says Kabir, coming close to The One without attributes expels all illusion from one’s heart”. And “Brother, where have these Gods come from; who has misled you; Allah, Ram, Karim, Keshav Hari, Hazrat, they are all the names of The One”.

It was this notion of one universal religiosity overriding denominational religions and one universal God for all irrespective of their denominational identity that was the Truth Akbar had discovered in the Ibadat Khana and Abu’l Fazl had incorporated in his concept of sulh-i kul. This was the essence of his rationality for which he fought hard battles with the ulama at the court – and won. The two top leaders of the ulama, Abdullah Sultanpuri and Shaikh Abdun Nabi, who had wielded great power at one time were sent to hajj — always considered a punishment short of execution. For Abu’l Fazl was fighting the same battle at the court in highly polished Persian as Kabir was doing at the grassroots level in the everyday language of the masses. Abu’l Fazl is fully aware of Kabir and the significance of his teachings and pays him a handsome compliment for it.

The inclusive ethos of Kabir and Abu’l Fazl continued to percolate down the centuries at the folk level e.g. in the poetry of Bulleh Shah and at the classical plane in the poetry of the most celebrated Urdu poet, Mirza Ghalib.

Today, well into the 21st century, as India and indeed much of the world witnesses a surge of militant intolerance towards religious difference, much of it being state-sponsored, it is the Truth of Kabir and the notion of sulh-i kul of Akbar and Abu’l Fazl that are a sober reminder that inclusiveness rather than exclusion, acceptance rather than hostility and violence are far more promising bases of humanity’s survival. Intolerance and violence damage us all.

The writer is National Fellow, Indian Council of Historical Research.