Rahat Indori, the Poet Who Broke Through Conventions and Spoke Directly To the Public

His stage expanded beyond the intimate confines of the old, traditional mushaira. 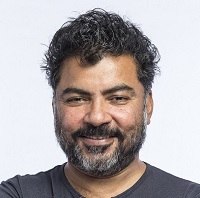 It was the early 1980s. My father was a mushaira buff. He would procure audio cassettes of mushairas and listen to them on loop. When VCRs became widespread in our living rooms, he was excited. Now he could get video recordings of the mushairas and watch them for hours.

In one such recording, there was this new young poet, unconventional in his style and syntax, provocative, a complete performer, and challenging the grammar of mushaira etiquettes, yet the crowd seemed to be loving him. His choice of words was unusual. As said in Urdu literary parlance “Asaatza ne nahin baandha hai,” or the masters have not woven it into the poetic syntax. But his words had a great connect with the audience. And his style, maverick like, was completely over the top. When my poet uncle and aunts, traditional and conservative in their form and style, saw the performance, they disapproved of it.

But my dad, himself a great performer who would often recite shers with even greater bluster and elan in private mehfils or Muharram majlises, seemed to be loving it. I was intrigued. The young, impressionable me asked him who is this poet? With much glee, he said, this is Rahat Indori.

Rahat Indori burst on to the poetry scene in the mid-1970s and soon he made a mark for himself on the Mushaira scene. From early on, he understood the format of mushaira and figured out a way to challenge the standard practices in mushaira. No wonder his PhD dissertation was ‘Urdu Mein Mushaira’, awarded to him in 1985 from Bhoj University, Madhya Pradesh.

What was this challenge? How did he break the idiom? Ali Khan Mahmudabad in his brilliant book Poetry of Belonging: Muslim Imaginings of India 1850-1950 puts forth an exposition that nation-states being ‘normative horizons’ subsume all other identities within them. They are ‘containers of social processes.’ Once we have put the lid of nationalism over this container, any of the multiple identities that the container has finds it hard to assert or dominate the ‘normative horizon’ of the national identity.’

Also Read: Rahat Indori’s Ghazals and Style Spoke to the People and For Them

Mushaira itself went through a transformative phase in the early 20th century, morphing from a literary symposium into a platform for voicing politico-social-religious and identity-based issues through poetry. It became a forum that could contain multiple ‘social processes’ and legitimately challenge the ‘normative horizon’ of the nation-state. Especially, when a poet sees a nation-state being usurped by self-serving, power-grabbing politicians who often cloak themselves in patriotism to hide their nefarious activities.

The print media ‒ reportage of mushaira in newspapers, reviews in literary journals ‒ increased the physical reach of a mushaira. It was no longer just 100-200 people watching the poets in a physical space but many more, since a wider audience was tapping into mushairas through print. And the Internet further revolutionised that. Now a Rahat Indori video clip of reciting his ghazal at a Rekhta Mushaira has millions of views.

Rahat understood these intricacies. A film has to undergo censorship. A printed word in a newspaper or a literary journal undergoes editorial scrutiny. But a spoken word at a mushaira is unfettered, defying, a challenge ad infinitum negotiating the unspoken boundaries of a culture. Mushaira was the only forum where when the normative horizon is being usurped by scoundrels, the poet can challenge this hacking of the normative horizon. Rahat could play enfant terrible, as in the words of Maaz Bin Bilal, and get away wearing his politics on his sleeve. He knew he had beaten the oppressors at their own game, and he was aware that this act ‒ the wave of the hand, the glare straight into the audience, the meaningful pause before the punchline, and the all-conquering smile to wind it up ‒ of his made him hugely popular among his audiences. He became their voice.

He chose a style which was conversational, and his choice of words was of everyday usage. He knew this is his stage and his time to bare it all to his audiences. He spoke in an idiom that echoed with his audiences. To give an example Habib Jalib wrote:

Where Habib Jalib invokes God, Rahat invokes the tenant. Habib restricts his attack to the ownership of the throne alone, whereas Rahat extends the metaphor and in fact asserts that the people are the owners of the throne. A country where most of the urban population still doesn’t own property and lives as tenants, nothing evokes more angst than the fear of eviction. With that one line, Rahat offers a threat and a balm too – for those in power are people like us – temporary and can be evicted anytime. And what better, we’re the landlords, the owners, this time. No wonder he struck a chord with millions across the country. The final couplet of this ghazal:

Became a war cry during the anti-CAA-NRC protests recently. He became a fearless crusader for the oppressed and used his poetry and the platform of Mushaira to effectively channel the same.

Later he ventured into Hindi cinema and wrote some memorable songs like Yeh Rishta from Meenaxi, Dil Ko Hazaar Baar Roka from Murder, Neend Churayi Meri Kisne O Sanam from Ishq to name a few but he remained foremost a poet of the masses and spoke in a language that was theirs.

Is it not a wonder that he came closest to Habib Jalib, in the words of Javed Akhtar, when he took the stage and recited his poetry? And sometimes that stage was none other than the ramparts of the Red Fort, where the very people he was challenging had given their grandiose speeches.

Danish Husain is an actor, poet and theatre director.