The public broadcaster – which runs Doordarshan and AIR – has apparently been asked to give up its PTI and UNI subscriptions and rely instead on Hindustan Samachar. 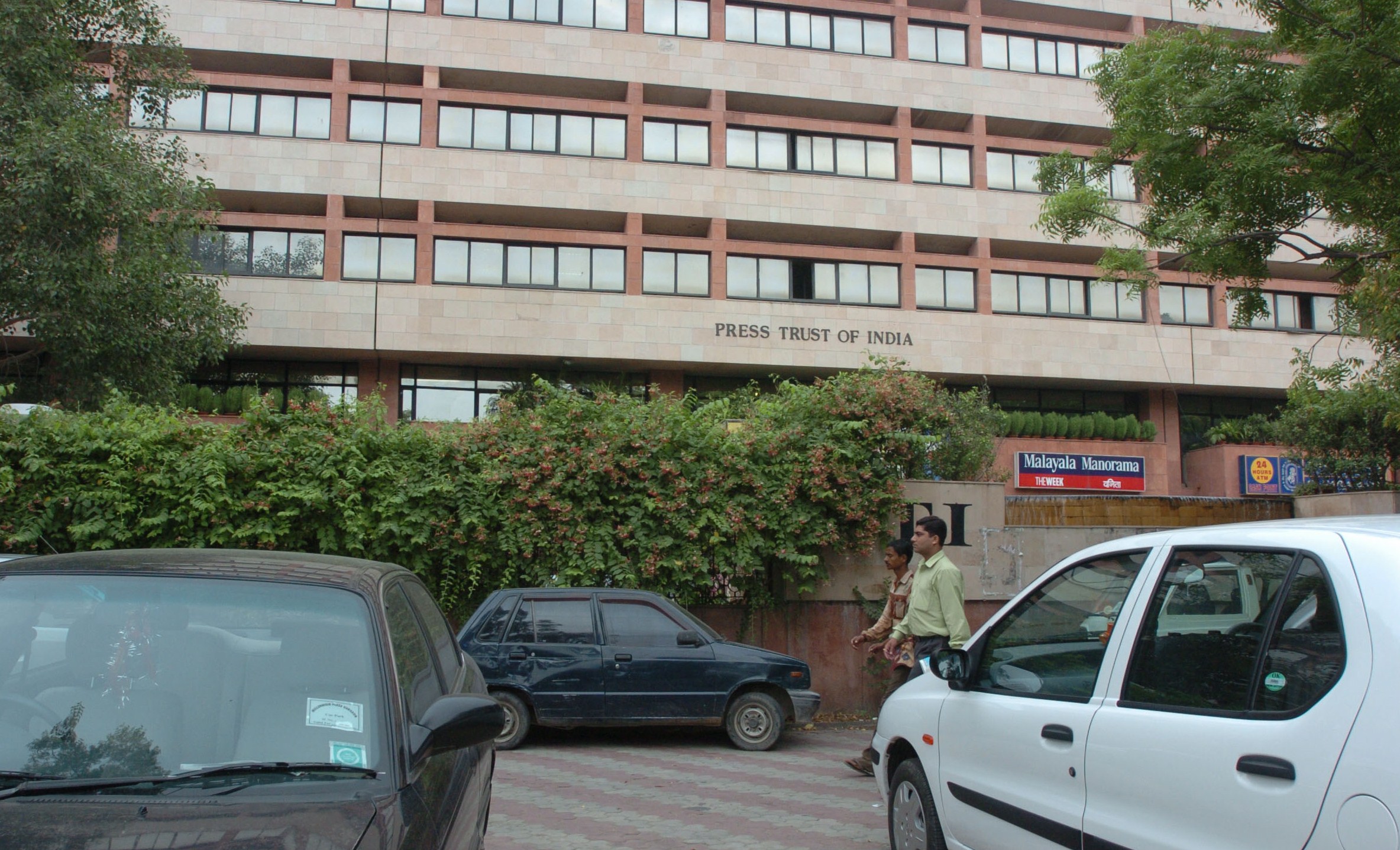 The Press Trust of India building on Parliament Street, New Delhi, where Prasar Bharati used to be headquartered until recently before it moved away because of the high costs. Credit: Neeraj Bhushan

New Delhi: In what may amount to one of its most direct attempts to influence the media, the Narendra Modi government is believed to be examining a plan to end Prasar Bharati’s use of news agencies like the Press Trust of India and United News of India and get the public broadcaster – which runs Doordarshan and All India Radio –  to rely instead on the Rashtriya Swayamsevak Sangh-backed Hindusthan Samachar for its basic news.

Word of the replacement plan was put out in the public domain by the former I&B minister and current Congress spokesperson Manish Tewari on July 12. He claimed that his “sources in the ministry” told him that the government has instructed Prasar Bharati, India’s largest public broadcasting agency, to terminate the services of conventional news agencies, which, together, are paid Rs 15.75 crore annually.

Sources- Prasar Bharti being instructed to terminate the services of both PTI&UNI and replace with RSS backed Hindustan Samachar.ANI next1/2

Tewari also claimed that “pressure” was being exerted on both the news agencies to provide “slanted” feeds, which, in other words, means news which depicts the government only in a positive light.

The CEO of Prasar Bharati, Shashi Shekhar, tweeted that DD and AIR had “ongoing subscriptions” of PTI and UNI but would not comment on future plans:

Prasar Bharati (DD and AIR) has ongoing subscriptions with both PTI and UNI https://t.co/uz0c1fVrLT

What he did not say was that this because the Hindustan Samachar wire service was being provided free of charge at present on an ‘evaluation’ basis.

Last year, as The Wire reported, the Modi government sought to get the PTI board to chose one of its handpicked nominees as the editor-in-chief of the news agency when the then incumbent, M.K. Razdan stepped down. However, the board rejected these nominees and later went ahead and appointed veteran journalist Vijay Joshi as PTI’s editorial head. Since then, the agency has continued to report national developments with the same measure of independence as before.

Manish Tewari alleged that the government wanted to control the political narrative by influencing bodies like Prasar Bharati, which are meant to be autonomous. The public broadcaster is known to have a pro-government slant, despite the fact that successive governments have denied the allegation.

However, if PTI and UNI are indeed shown the way out, this would be the first time a government uses its influence directly to get positive media coverage.

Speaking to The Wire, Tewari said, “After having brought the larger part of the media into submission, the only thing left was to control the news feeds. The instructions do not come in writing from the government. The top officers of Prasar Bharati have already been told to replace PTI and UNI with Hindusthan Samachar.”

What impact such control has over primary information, in which news agencies like PTI and UNI specialise, remains to be seen. Several Prasar Bharati officials with whom The Wire spoke refused to comment on the issue, but made it clear that although DD and AIR continue to use PTI and UNI news feeds until now, there have been rumours about the replacement plan for the past one month.

Tewari’s tweets indicate that if the government goes ahead with its plan, it may put forward the increasing financial burden on Prasar Bharati (because of the high subscription rates charged by PTI and UNI) as the reason to rope in Hindusthan Samachar. But given the way the government has targeted critical media houses and journalists in recent times, many civil society members may see this as another attempt by the RSS-backed dispensation to advance its majoritarian Hindutva agenda.

A former I&B secretary with intimate knowledge of the goings on at Prasar Bharati told The Wire, “The replacement plan has been on the cards for some time now. Prasar Bharati was located in the PTI building in New Delhi. Not only was PTI charging exorbitant rent for its space, it also had very high subscription rates. Prasar Bharati was forced to vacate the building consequently. The government may now see this as an opportunity to remove PTI and UNI and bring in one of their agencies.”

However, he added that Prasar Bharati, before subscribing to Hindusthan Samachar, little-known news agency that it is, should ensure that it has adequate staff and infrastructure to meet the high demands of the broadcasting agency.

“In the past, Prasar Bharati has told a dying UNI that it could not charge high subscription rates from Prasar Bharati and must chart out its revival plan. The same thinking should also apply when dealing with Hindustan Samachar,” he said, cautioning Prasar Bharati against the injudicious use of public money in this case.

The fortunes of Hindusthan Samachar, a multi-lingual news agency founded in 1948 by Shivram Shankar Apte, a senior RSS pracharak and co-founder of the Vishwa Hindu Parishad along with RSS ideologue M.S. Golwalkar, have swung in a profitable direction with the institutional help of the Modi government.

A Hindustan Times report said that the agency, in its declared mission to present news from a “nationalist” perspective, is set to raise its subscription charges soon. It added that in its plan to expand its reach, the agency will move to a “swanky” office in Noida from its current address in Paharganj, right next to the RSS’s office in New Delhi.

The agency has benefitted from the BJP-led governments at the Centre in the past too. After having faced fierce attacks during the Emergency in the 1970s, the agency was forced to shut shop in 1986. But the RSS revived it in 2000 during Atal Bihari Vajpayee’s tenure as prime minister.

If it lands government contracts now, like Prasar Bharati’s subscription, its finances will likely to receive a great boost.

Attempts to reach Surya Prakash, chairperson of Prasar Bharati were unsuccessful. The story will be updated with his comments when they are received.

Note: This article has been edited to add the tweets Prasar Bharati CEO Shashi Shekhar put out in response to Manish Tiwari