In These Portraits of Africans, an Unflattering Picture of India

Mahesh Shantaram’s photographs are a reaction to the injustices that people from Africa who live in India have to deal with every day. 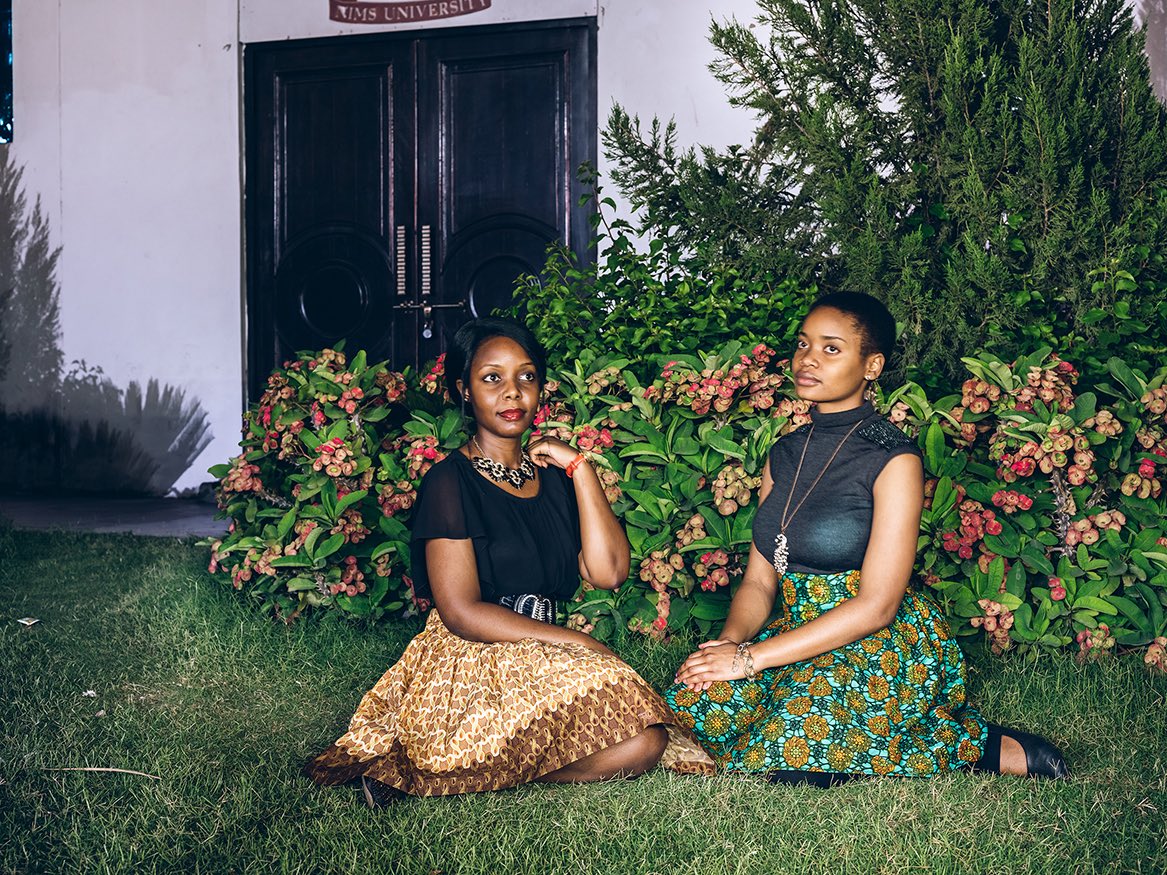 Bengaluru: In seductive half-light, Mahesh Shantaram photographs India’s small but growing community of African migrants, a people who live in the shadows of our urban spaces. They lead lives of rigid separation from Indian society, where ignorance and prejudice are rampant. These expatriates must have super powers to ignore the persistent and cruel taunts – and worse – of the locals towards them, which can lead to “ending up dead on a bad day and losing face on a good one,” says Shantaram. He went to work photographing members of the roughly 50,000-strong community of Africans in India, here to work or study, after a Tanzanian woman was attacked by a mob in Bengaluru last year.

“People see my work and react with their own biases. For instance, a US publication – I won’t name which one – kept referring to my subjects as ‘refugees’. They are not refugees. They are here to work or study. There are others who say ‘why aren’t they smiling?’,” he says with exasperation and an eye-roll.

Most Africans in India lead lives of uncertainty, keeping strictly to themselves, while kitted out with sass, from well coiffured hair to pristine sneakers or sharp stilettos.

“We need to be more self-critical, have an open mind that is accepting of other cultures and re-evaluate our place in the world of nations. Instead, we are quick to mouth homilies about how India has been a tolerant culture for centuries. They came believing in an open society and a progressive environment in which they could study and prosper. We have repeatedly let them down,” says the Bangalore-based photographer.

Shantaram’s pictures were a reaction to Indian injustices towards a people who occupy squalid, poorly-lit homes in semi-legal or far flung neighbourhoods because of our legendary aversion to dark skin. When he names the cities this project took him to, it is always in quotes. In Bengaluru, they have been relegated to Soladevanahalli, a village barely within city limits, a place close to the airport but that is so far from anywhere it could well be another city. In Delhi, they once occupied Khirki Extension, a neighbourhood that was fairly central with excellent transport links, but due to mounting pressure from locals, politicians and government in the form of accusations of drug dealing, prostitution and even cannibalism, not to mention harassment resulting in increasing physical assaults, moved to a place in Chhatarpur called Rajpurkhurd, a place hardly anyone, except those who live there, knows. In Jaipur, most of his photographic subjects attend NIMS university. The institution is located right next to Achrol Gaon, where black people are not welcome so they live in the historic Amer village, far away from central Jaipur, where the fabulous Amer Fort is located. This is 35 kilometres away from the university and the only way to commute is on overcrowded Jeeps, often hanging off the back of them. His stoic African friends say they are used to travelling like this back home but are given a discount when they don’t get a seat.

Over time, Shantaram became very fond of this vibrant community – it is not hard to see why – that refuses to play victim. They are proud but humble, generous, devout, fashionable, articulate, kind, even bohemian. And like Indians and others around the world, some are sexually liberal while others are conservative,“Nobody really wants to let you take pictures so we’d spend hours together and not take pictures though I always had my camera with me. I don’t do the talking, just the listening. It’s a good process because they are otherwise so hidden. There is an artificial element of the exotic in meeting them, of course, because they have little access to our spaces and we hardly have access to theirs, which is unfortunate,” Shantaram says.

In Bengaluru, for instance, in 2009, says Shantaram, the restaurant owners’ association took the unanimous decision to not allow Africans into their properties. The dirty job of intercepting them landed with the security guys at the gates, with the ban remained in place until two-and-a-half years ago.

“Africans are seen as not having agency, the auqaat, to act in public environments or even speak against Indians when they feel wronged by them. Their problems are not theirs – these problems are a problem of Indianness and the Africans are just caught up in this shit. Africans just hold up a mirror to Indians who act in these petty and evil ways and show us who we really are.”

For Shantaram, African-ness needs to be celebrated in its everyday ordinariness, in the beauty and strength of lives lived under conditions of alienation and stress.

The pictures are posed and a few are conceptual. 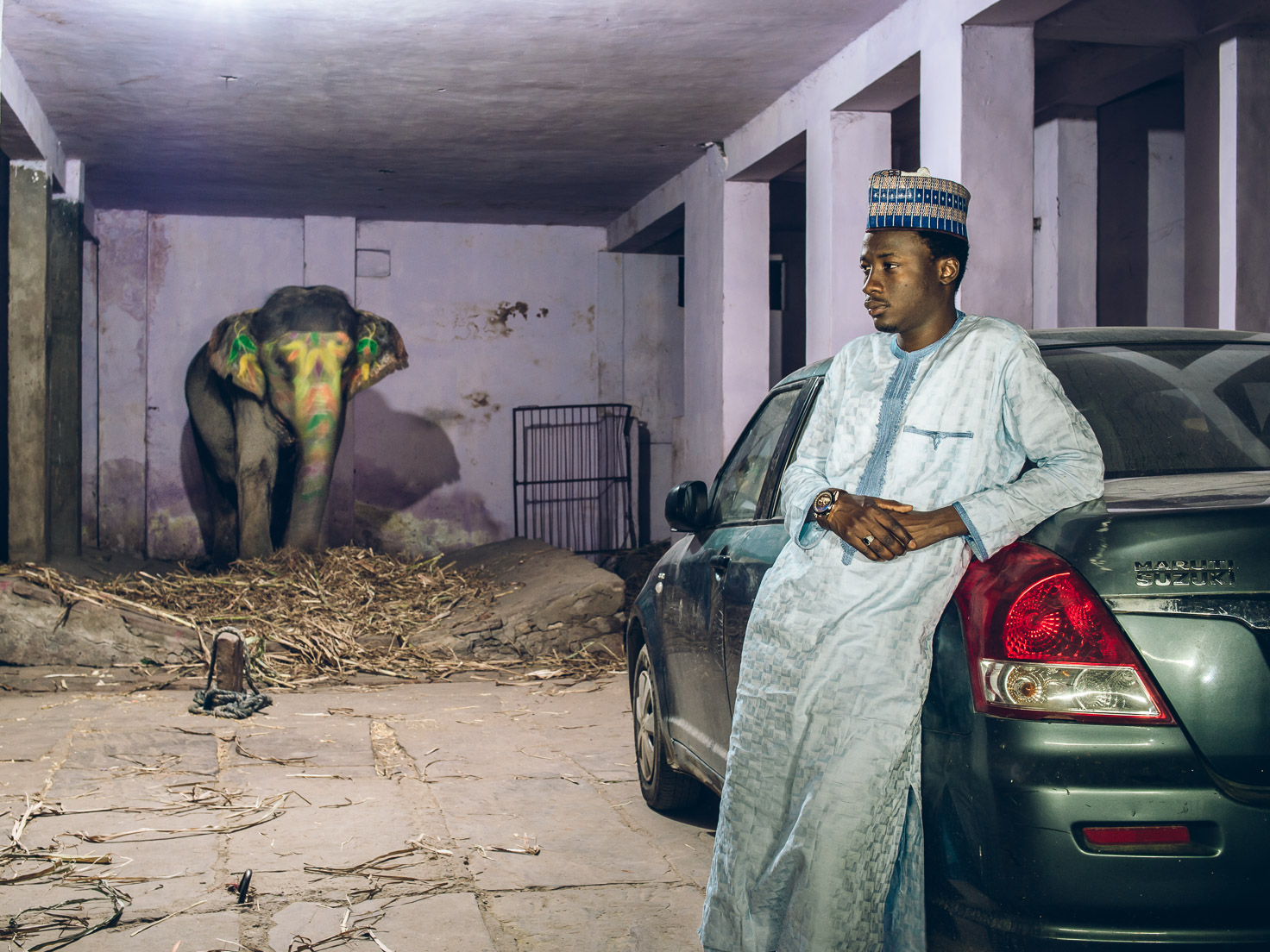 Ameenou, a masters student at NIMS, Jaipur lives a stone’s throw from the UNESCO World Heritage site, Amer Fort. Most of the  building where he lives is occupied by Muslim Africans who live 5-7 to a room and do not own cars. The owner of the building, also a Muslim, has cannily rented the parking lot to Amer’s mahouts, which explains the elephant in the picture. There is always a whiff of dung in the air. 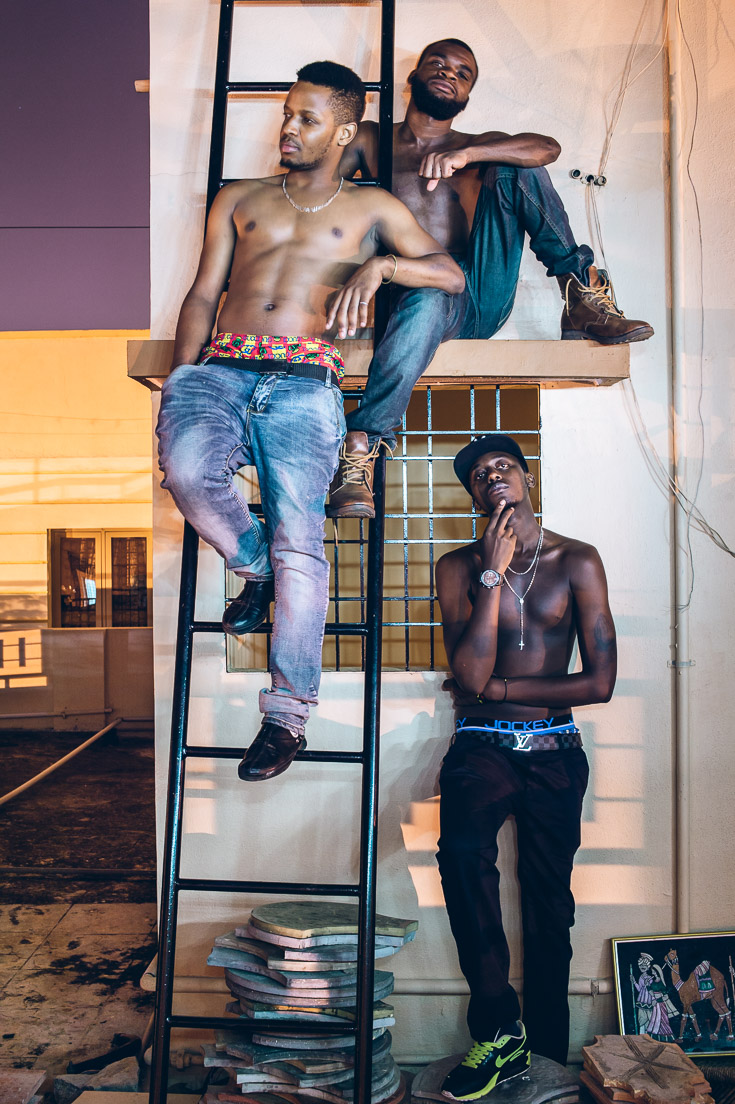 This was taken on my terrace when Davis, Hassan and Leon from Tanzania, Zambia and Rwanda respectively came visiting. It’s the end of their college course and the friends will soon part ways and return to their countries, to the destiny that awaits them. Credit: Mahesh Shantaram

Hassan (on the ledge) was one of the first to meet the photographer. He lived in the neighbourhood of the Tanzanian woman who was attacked in Bengaluru in February. Him and his friends were all setting off back to Africa – Zambia, Tanzania and Rwanda – and will probably not see each other again for a long time.

Helen confronts her past everyday, Jalandhar, 2016 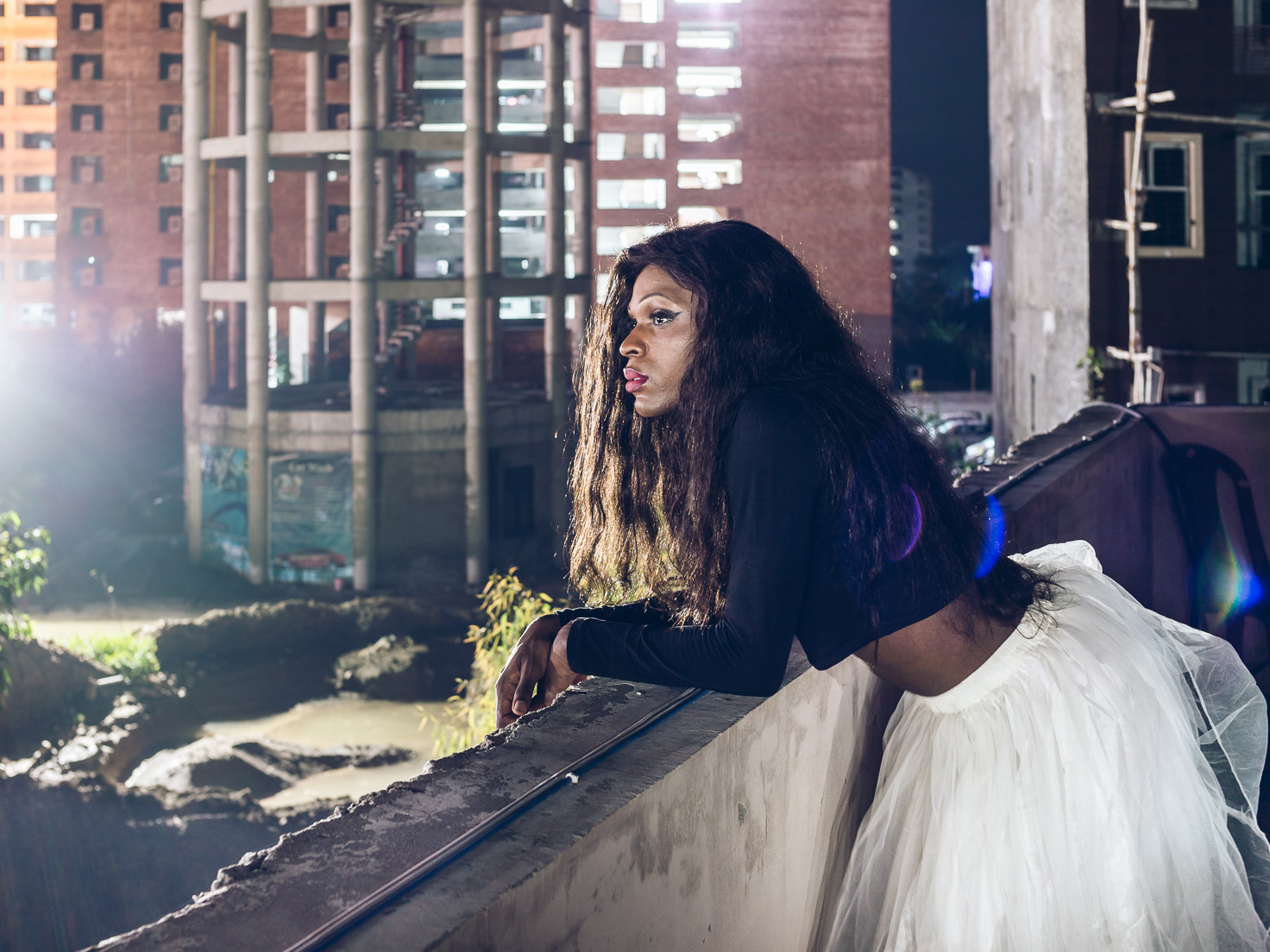 The daughter of a Zambian military officer, an articulate person, she was a boy when she came to study at Lovely Professional University. She hated living with the men and contemplated suicide. Finally, she gathered the courage to come out. She took asked her teacher to give her 15 minutes and talked about gender dysphoria in front of her class. She dropped out for not being regular at classes. Her parents would disown her for dressing like a girl. She had to go back home as a boy.

Arnold is Batman for the Congolese, Faridabad, 2016 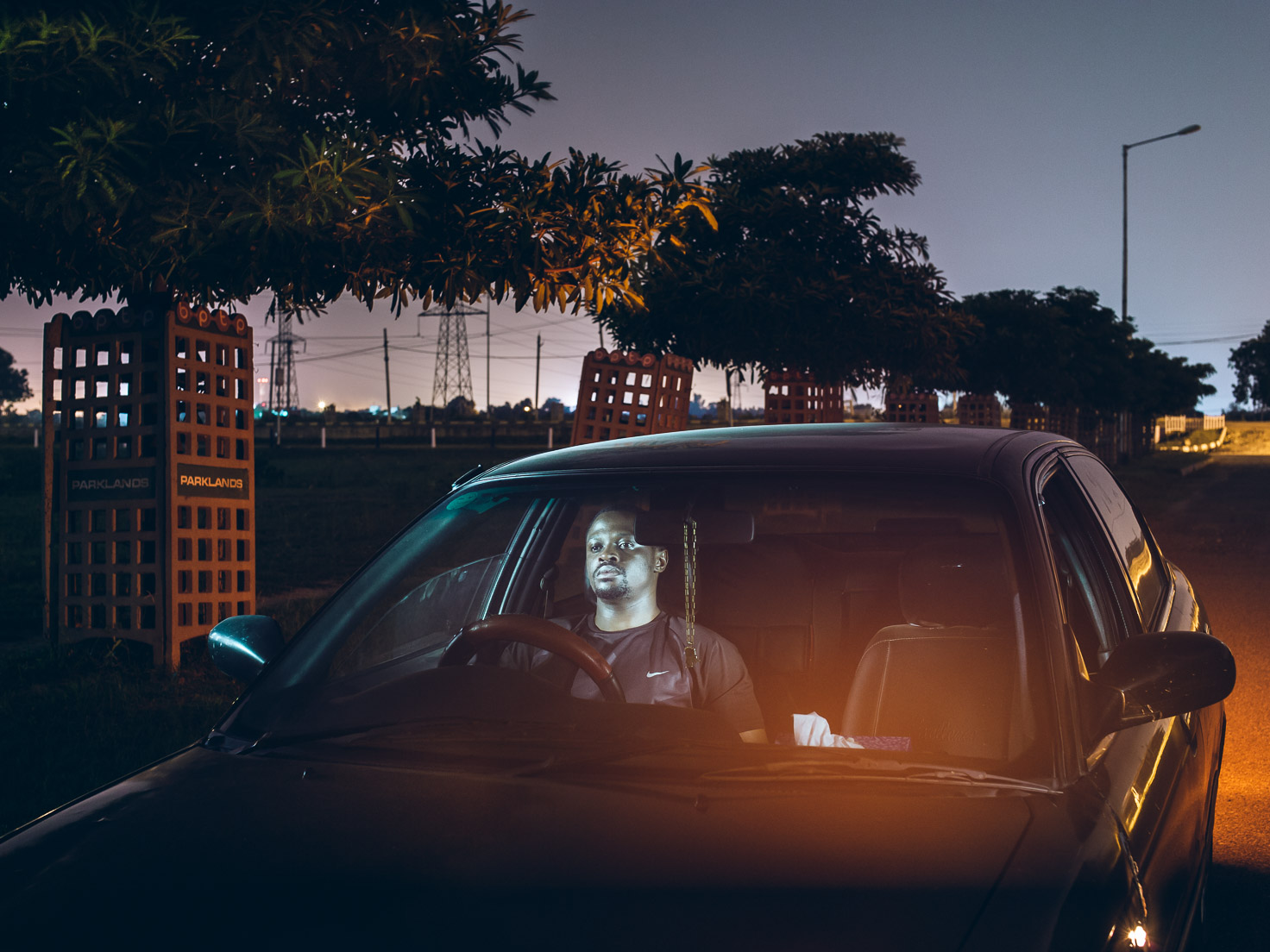 Arnold is Batman to the Congolese. Faridabad, 2016. Credit: Mahesh Shantaram

Arnold frequently helps his fellow country people from the Democratic Republic of Congo who find themselves in tough situations in India. 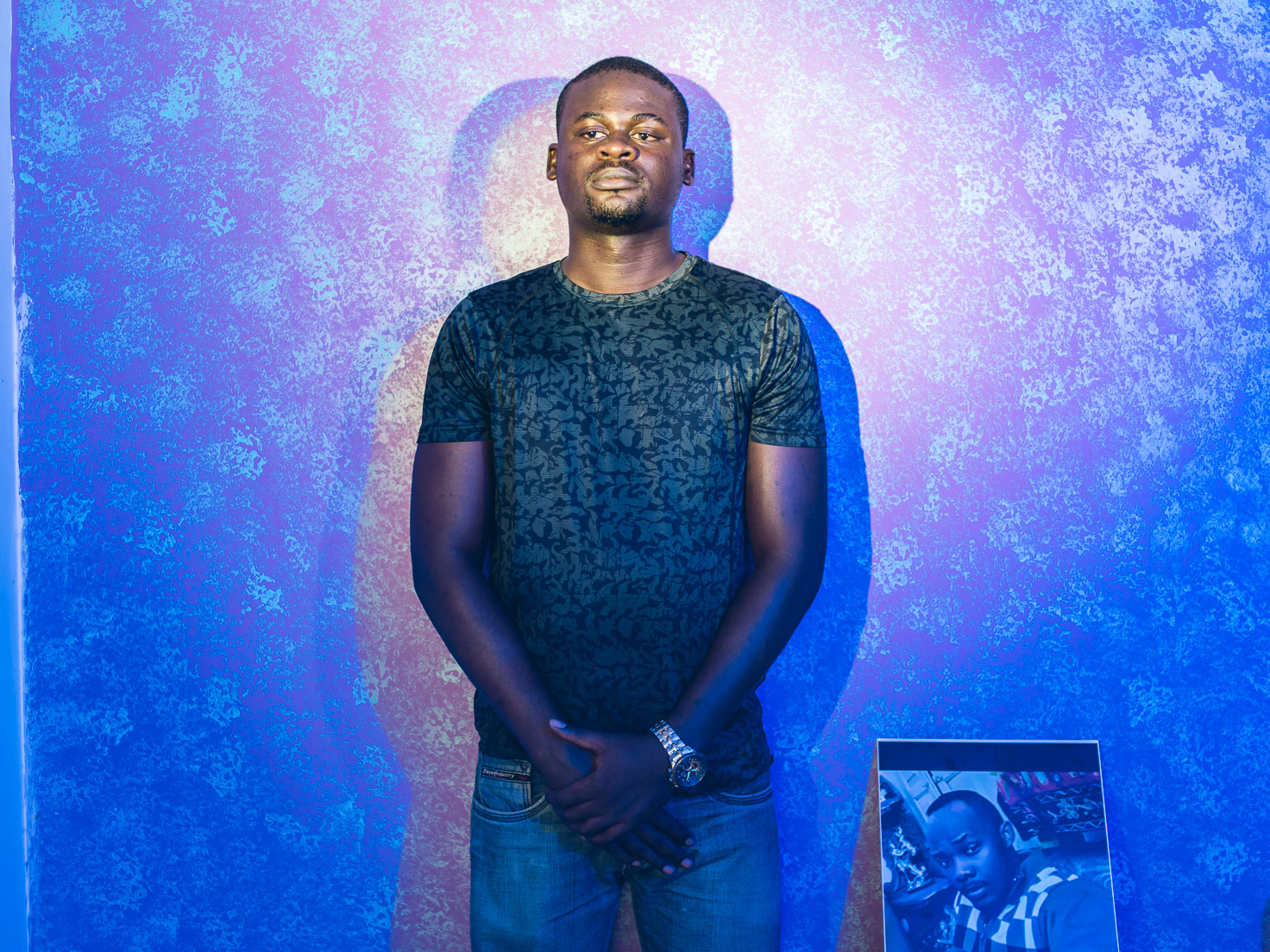 Michel is the brother of Olivier Kitanda, who was murdered on May 20, 2016, in Delhi. He has just completed his studies here and wants to leave the country as soon as possible. Credit: Mahesh Shantaram

Michel’s brother was killed over an argument for an auto – his head was smashed with a stone. A picture of him with the injuries went viral. It resulted in a diplomatic row a few days before Africa Day was to be celebrated in Rashtrapati Bhavan, with the African delegates pulling out of the the government of India-sponsored event.