The 100-year-old Patna Museum is being made to part with rare artefacts to grace the posh behemoth, Bihar Museum, in order to display the “glory of Bihar”. 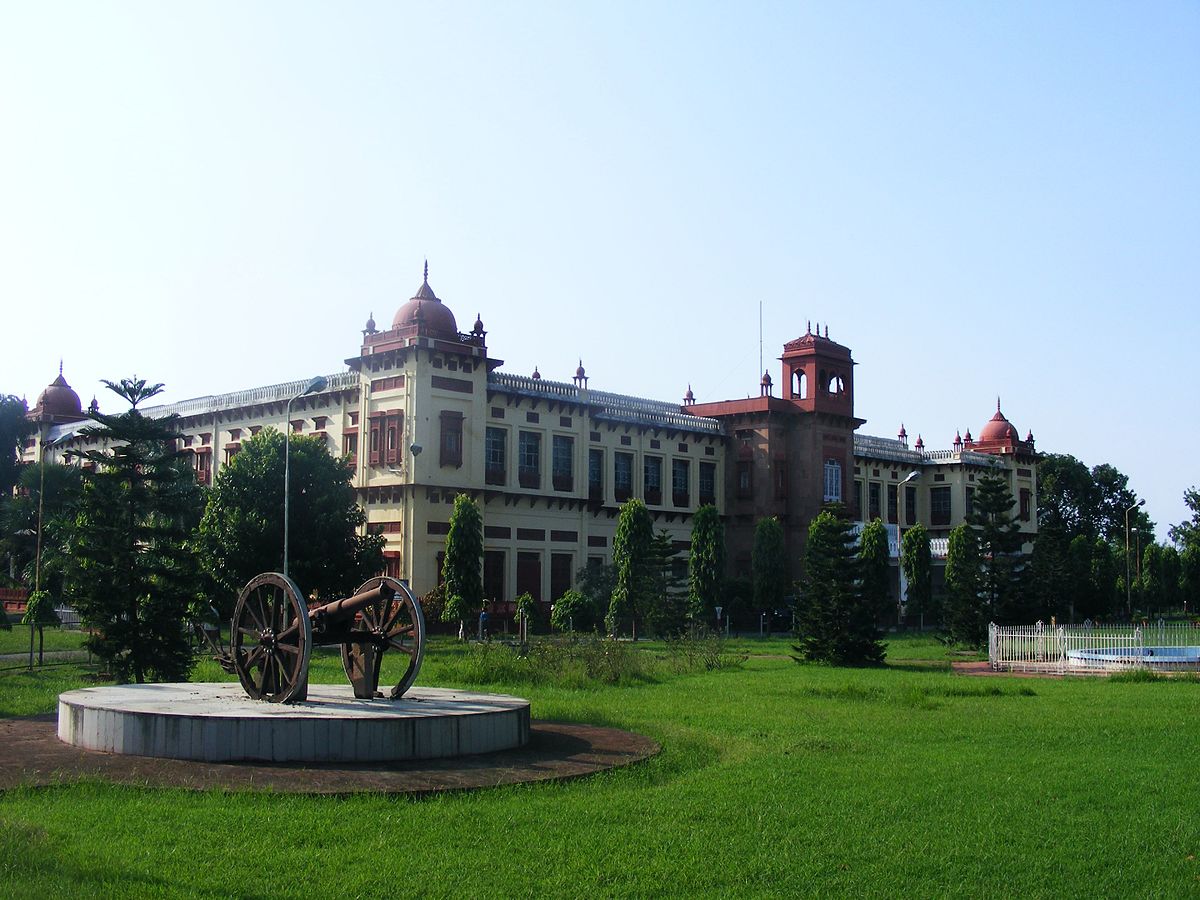 The year 2017 marked several important centenaries for Bihar, causing much celebration, especially focused around the Champaran Satyagraha. Prime Minister Narendra Modi visited Patna on October 14, 2017 to attend Patna University’s 100th anniversary as well. During his visit, the newly opened Bihar Museum made headlines, receiving high praise from the prime minister, who was escorted through the museum by chief minister Nitish Kumar. Photographs released to the press showed Modi and Kumar admiring the Didarganj Yakshi, which is now the museum’s most prized possession.

However, there is much irony amidst this celebration of heritage. The Didarganj Yakshi was, till recently, a property of the Patna Museum which, incidentally, also marked its centenary in April 2017, but with little fanfare. The nearly 2,000-year-old work of art was discovered in the same year the Patna Museum was established – 1917 – and as such, became a marker of the Museum’s identity. But, instead of celebrating Patna Museum’s heritage on its centenary, its collection was cannibalised and sent to its new and swanky cousin, the Bihar Museum, the chief minister’s pet project.

Why a new museum?

A new “world-class” museum was first proposed for Bihar in 2009. Speaking to The Wire, assistant director of the Bihar Museum, J.P.N. Singh said a new museum was necessary to showcase Bihar’s rich culture and heritage, and provide a counter-narrative to the state’s long-suffering image as a “gareeb pradesh”(poor state).

Much about this museum seems to be about consolidating a new Bihari identity – one that consciously distances itself from poverty. Architecturally, it is a behemoth, built over 17.5 acres of land. Its facade looks more like a state- of-the-art stadium, sitting proud, posh and shiny, alongside the Patna high court on Bailey Road, while its interiors are made of cavernous galleries, weeping walls and modern zen gardens. The sheer size of the new museum is obviously a statement of power, given that it dwarfs anything in its vicinity.

In terms of the collection, all the artefacts prior to the year 1746 that the Patna Museum held, will now be shifted to the Bihar Museum. If a rough periodisation is followed, this means that ostensibly everything that is pre-modern or pre-British is to be moved to the Bihar Museum to display the “glory of Bihar” – yes, that’s actually the tagline of the new museum.

The administration of the Bihar Museum also insists that technologically, the new museum is better equipped to display and preserve Bihar’s antiquities. Singh, who was employed by the Patna Museum previously, said, “I couldn’t recognise the artefacts in this new setting. They look more glorious here.” 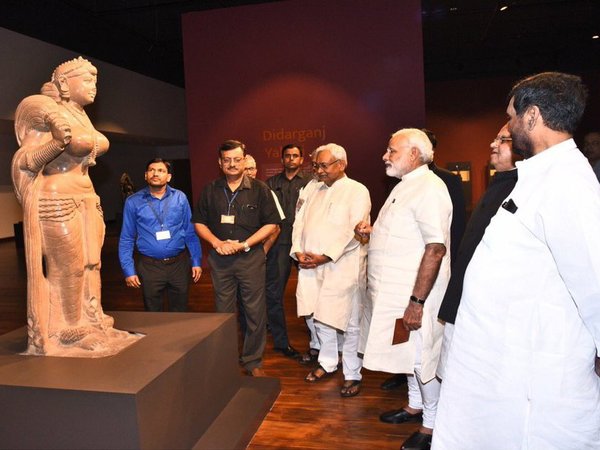 The Didarganj Yakshi was till recently the Patna Museum’s property, which also marked its centenary in April 2017, but with little fanfare. Credit: Twitter/@narendramodi

Yet, in its centenary year, the Patna Museum – known locally as Jadughar – is being eclipsed and its heritage is being dismembered and disregarded. Since September 2017, the Patna Museum has been closed to the public to facilitate the transfer of its artefacts, sparking protests among the intelligentsia. As prominent historian Nayanjyot Lahiri wrote last year, it has been thus far unheard of that a museum is made to part with its collection permanently, for the sake of populating the galleries of another museum.

Activist Pushparaj Shastri, who is part of the Save Patna Museum campaign, has alleged that the process by which the artefacts are being transferred are not entirely legal. He says that entire galleries are being emptied in the name of maintenance. The decision to build the Bihar Museum’s collection scavenging from the Patna Museum was taken by the state’s culture ministry. Technically, the artefacts are assets of the state. But many of the artefacts that belong to the Patna Museum were donated or curated especially for it. Therefore, transferring these to build the collection of another museum, without permission from the donors is certainly ethically questionable. For instance, the Rahul Sankrityayana collection was initially meant to be transferred, but the donor’s daughter, Jaya Sankrityayana Parhawk wrote a letter strongly opposing it. Singh has since clarified that the Rahul S. collection is to remain with the Patna Museum.

An official from the Patna Museum that the Wire contacted said he was not legally authorised to talk about the transfer of artefacts. Access to the museum was also barred given that it was closed at the time.

“Not in public interest”

“We, therefore, dispose of the writ petition holding that the project of construction of world class museum in Patna at the cost of about Rs. Five hundred crores in a prime land of 17 1⁄2 acres between the Secretariat and the Patna High Court is not at all in public interest and that the manner in which the contracts of consultancy etc. were awarded is far from transparent and objective.”

The initial prayer made by the appellant questioned the allotment of public money (then estimated to be about Rs 280 crore) for a project that didn’t seem to serve public interest, especially when so many other fundamental infrastructural projects were in need of more funds. In fact, Bihar is already home to more than 71 cultural sites and institutions that lie in various states of disrepair owing to a crippling lack of infrastructure. During period when the new museum was being planned, i.e., between 2009 and 2014, a comptroller and auditor general (CAG) report found that the Directorate of Museums of the state had been facing a severe shortage of trained staff and had not utilised 21% of the funds allotted to it. Interestingly, the total amount that was allotted to the directorate for the years 2009 to 2014 was just Rs 77.68 crore, which is just a fraction of the Rs 500 crore that the Bihar Museum received.

Furthermore, the CAG report observed that the already established museums were lacking in the conservation of artefacts and their accessibility. The Patna Museum, being the most prominent, for instance, was lagging on the digitisation of the Rahul S. collection. The report said that at least 20 manuscripts from the collection were torn and no effort was made to restore those despite the availability of funds. Even in terms of cataloguing and documenting antiquities, only 41% of the artefacts belonging to the Patna Museum had been documented properly as of 2014. The number is 34% for all the artefacts in all the museums in Bihar.

Given this sorry state of affairs, the questions that were raised when a new museum was proposed naturally related to why funds weren’t being directed to improve the already established institutions, which would have been cheaper than building a new one.

Discrepancies and a lack of transparency

From the facts presented in the case, the initial budget allotted for the Bihar Museum was Rs 280 crore. The state claimed that contracts were awarded after international tenders were circulated. A Toronto-based organisation, Lords Cultural Resources, was commissioned to plan the enterprise, and charged Rs 4.3 crore. Larsen & Toubro was given the building contract amounting to Rs 280 crore. In addition, a number of other consultancy companies were given contracts amounting to a total of Rs 220 crore. But, as the report notes, there do not seem to be tenders corresponding to these appointments.

“Even after M/s Lords Cultural Resources was appointed for the entire project, in the manner referred to above some more consultants such as Maki & Opolis Mumbai, M/s Kingsmen Fairtech, the Fabrications Agency India, and M/s Lopage Design were awarded contracts worth Rs.41,28,00,000/-, Rs.31,36,82,100/- and Rs.2,65,87,764 respectively. The construction contract was awarded to M/s L & T. Chennai at Rs.280 crores. In other words, for construction of buildings worth Rs.280 crores, the Government spent about Rs.220 crores towards consultancy and other such activities.

To our specific question as to whether tenders were called before the consultancy works were allotted, there is no specific answer. It is relevant to mention that not a single rupee of this amount is spent for the land of 17 1⁄2 acres which would cost about a thousand crores, nor does the amount represent the cost of any monument or object to be displayed. It was only for awarding the contract worth Rs.4,30,00,000/-, the tenders were invited. Thereafter, the contracts running into hundreds of crores were awarded to consultants, otherwise than through inviting tenders.”

In response to these allegations, the state simply said that the information presented was “not true”, but did not furnish additional details. 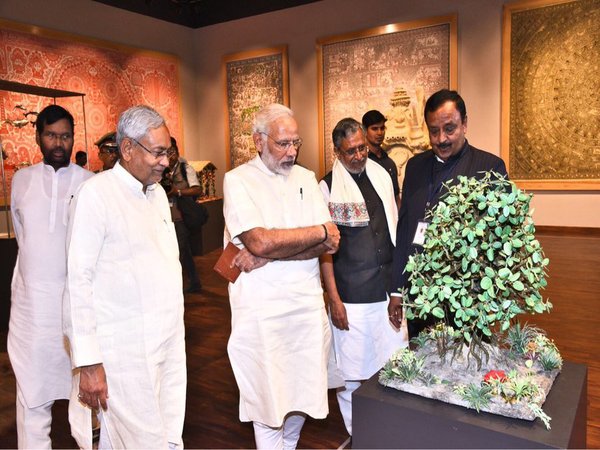 If the purpose of the Bihar Museum was to make the people of the state aware of their own heritage, then perhaps it is only partially successful. One of the primary reasons that the decision to relocate Bihar’s material heritage to the new museum was met with protest was that it would no longer be available to students who earlier had free access. The Patna Museum’s entry fee is Rs 20, as opposed to Bihar Museum’s hefty Rs 100 for Indian nationals. In a state where per capita income is only about 35% of the national average, this seems rather prohibitve. It defeats the purpose of a public museum that is meant to showcase heritage, which technically belongs to the people.