An exhibition, Part Narratives, put together a collection of works that portrayed the experience of Partition and the characteristics of memory.

I have often found that works of fiction and art are able to better represent the complexity of reality than works of non-fiction that try to detail fact. I was struck by this again at a recently concluded exhibition, Part Narratives, which was curated by Gayatri Sinha and held at Bikaner House in Delhi between January 7 and January 21.

The exhibition was conceptualised around artists who drew upon their memories of Partition and were thereby creating an archive of their experiences – their realities – of Partition. Aptly named, Part Narrative conveys that nebulous quality of memory – conveying more the feeling of individual realities, rather than factual reality.

The works in the exhibition reminded me of the word ‘uchronia’ – literally, a time that didn’t happen. Though in a different sense than how Alessandro Portelli had used it, in the context of this exhibition, I thought it was uchronic because of how memory operated retrospectively to create these works of art. They were wrought with the memory of trauma, of loss, from imperfect visions of the journey with the palpable sense of danger and uncertainty. It was uchronic because the art represented a specific temporal reality that had been tempered by the distortions of memory. 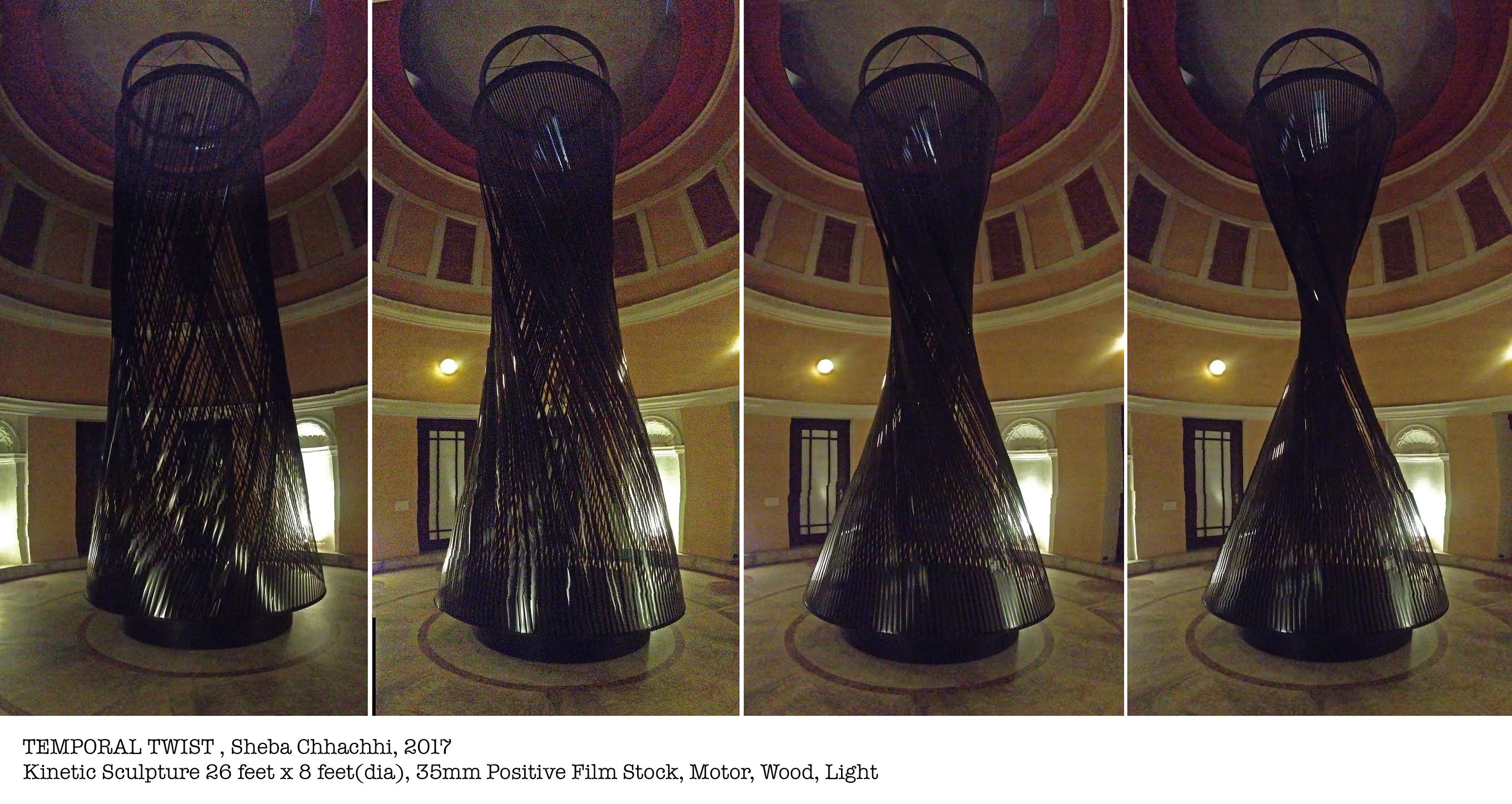 The most striking installation for me was ‘Temporal Twist’ by Sheba Chhachhi. A mammoth piece of art, going up all the way from the floor to the ceiling were ribbons of film, each a specific moment in time, a memory, rotating slowly, painfully in the shape of an hour-glass. It embodied perfectly the warping of memory over time as each strip of film twisted into a slightly different shape with each turn of the hourglass.

‘Memorial’ by Anita Dube was another larger-than-life installation that spoke vividly of the experience of women crossing over during the Partition. Layer upon layer of frayed black clothing hung behind rail lines telling the story of the thousands that perished beneath the tracks – the violence and brutality of the experience draped plainly on the wall. 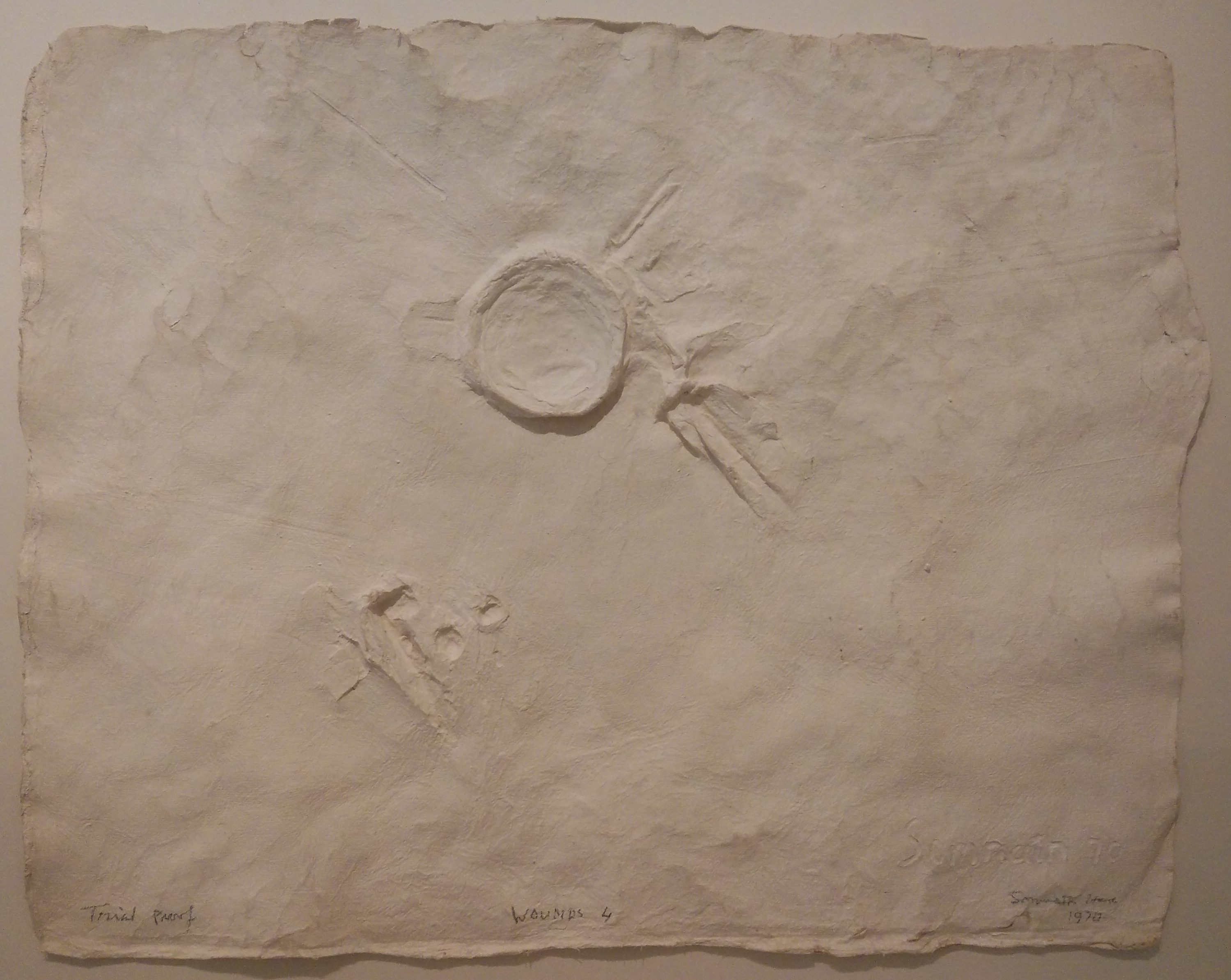 Somnath Hore translated the violence into the very architecture of the paper. Pranabanjan Ray writes of these works, “the shapes and the contortions have dynamism of an organic kind, evoking thereby the associations of germination, birth, decay and death.” Ray observes that these works are more tactile than visual, conveying a sensation of “flesh pierced by knives, spiked by bayonets, battered by heavy sledge-hammers, ferreted by shrapnels and spoilt by unattended gangrene oozing blood and pus.”

The way in which the heavy paper is shaped does have a chilling sensation on observation. The visual ambiguity though, was similarly reminiscent of a somewhat foggy recollection of the violence that was suffered, mellowed by time in the curvature of the paper.

M. Madhusudanan’s charcoal drawings, ‘Homage to Bade Ghulam Ali Khan’, are a series of dramatic sketches depicting the suddenness of Partition, the urgency of it. Little potlas (cloth bundles) of assorted possessions tied up hurriedly. One among the shadowy sketches is particularly disturbing – a face wrapped inside a bundle. It portrayed the disruption of one’s identity, suddenly wrenched and stiflingly packed into a small bundle lined by an uncertain future.

The disembodiment of Partition was particularly stark in Arpita Singh’s work. The harsh edges and broken figures suggest an irreparable loss.

On a more personal level were a number of photographs by Nandita Raman of a cinema hall that her family had owned. Having suffered the ravages of time, the pictures of incompleteness are tinged with suggestions of a more wholesome past.

Susanta Mandal’s ‘Naukar ki Kameez’ is also inspired by a personal experience. While attempting to replace a peon who had retired from his art lab, Mandal found that a number of people came and went within the space of the year. The installations involve two sets of projections in a screen inside a dark room. One projection is constant while at the other end of the screen, the slides can be changed. The two projections converge on a screen in the middle, which show the face of a man that changes slightly but at the same time, remains much the same.

The exhibition was curated by Gayatri Sinha. She writes, “migrations become the stuff of minor narratives, on the fringe of change, a conspicuous and awkward product of time.” Partition, she notes, involves detaching oneself from “familiar forms of identity”, generating an “aesthetic of toxicity and trauma” in art and culture. The purpose of the exhibition was to archive some of the artistic responses to Partition, which hasn’t been done yet on an institutional level. Much of the history of Partition has been dependent on memory, on oral history, that doesn’t really fit into grand statist narratives of nation-building. These works are an “accidental archive” in the larger narrative of nationhood, existing almost unconsciously on the sidelines. But, as Sinha writes, “In staging the exhibition, what appears as a referent is the archive – frequently unruly, poorly documented, and uneven, but nevertheless, resilient, and accessible.”