Pandalur-Devala's Accidental Gold Rush – and How It Went Bust

In 1879, an Australian expert's report sent at least 50 British and Indian companies to the Pandalur-Devala region of the Nilgiris and sparked a frenzied gold mining rush that eventually destroyed the local coffee industry.

An illustration of locals panning for gold dust. Credit: Lock (1882) 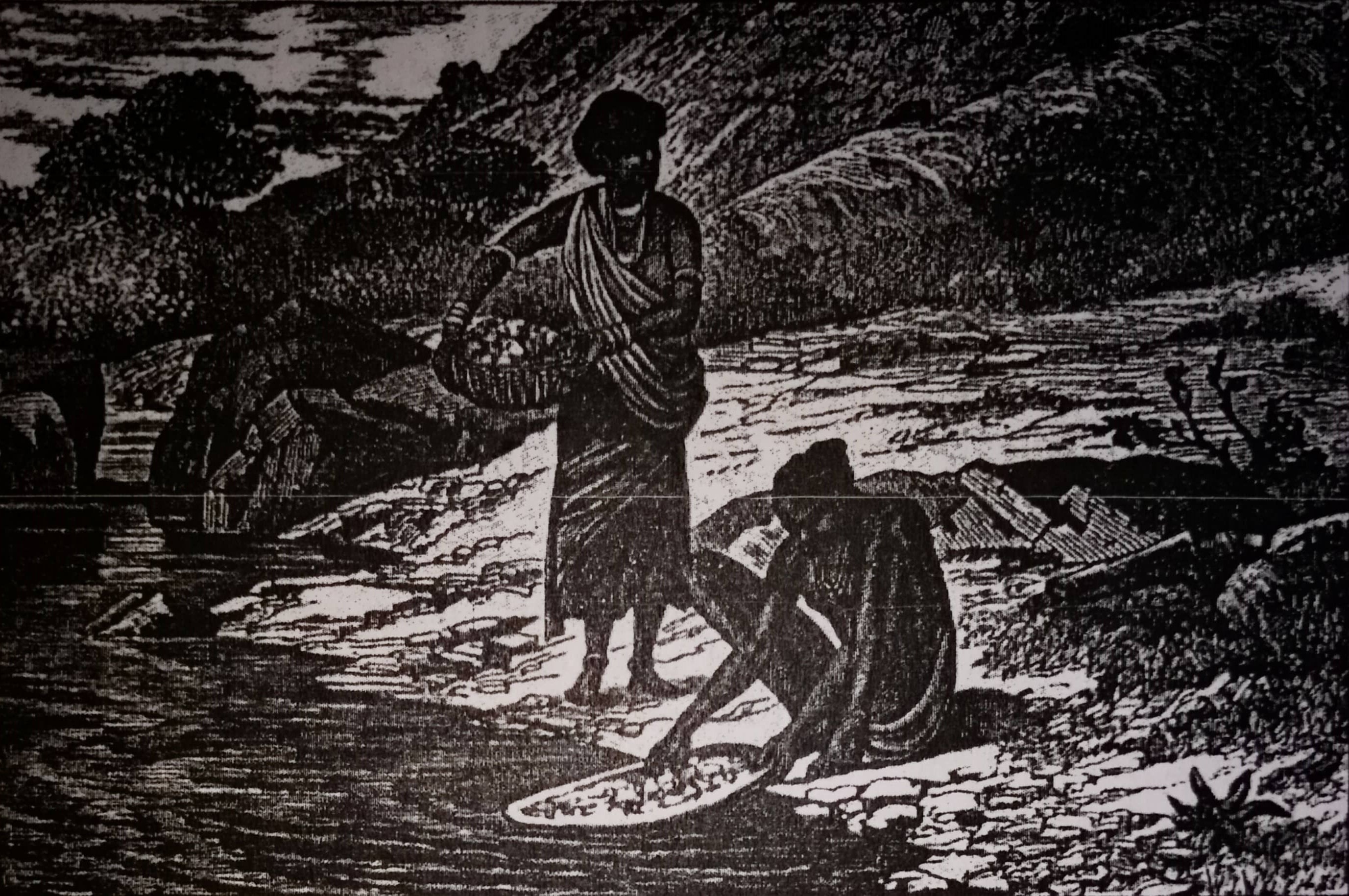 An illustration of locals panning for gold dust. Credit: Lock (1882)

Deep in the Pandalur-Devala region of the Nilgiri Mountain range in South India, people dig into solid rock for a small piece of it. This is no ordinary stone: it contains gold. The paniya adivasis inhabiting the forest-clad mountain slopes compete for the rock with Tamilians who were repatriated from Sri Lanka.

To know more about this unique gold mining livelihood, one needs to dig through layers of history.

Gold mining is not new in Pandalur-Devala. The local adivasis have been mining for gold for as long as recorded history exists. They crush the rocks, then pan the dust to concentrate the tiny specks and pieces. However, there have been some changes in the way they do it, and new people have joined them in search of a golden life. When Sri Lanka introduced its Citizenship Act in 1948, a few million people, primarily of Indian and Tamil origin, became stateless. Protracted negotiations between the two countries eventually led to what is known as Shastri-Bandaranaike Pact of 1964. This pact allowed repatriation and resettlement of the stateless in India. A substantial number of them were resettled in the Pandalur-Devala region. Soon, they took up gold mining, following the example of the local adivasis.

The recorded history of gold mining in Pandalur-Devala exists only from the colonial times. These records suggest that earlier, the local Nilambur chieftain had several mines of gold. These shafts could be as deep as 70 feet and employ the five to six hundred khalasis. It was during the colonial period that the scale of gold mining in the region rose to unprecedented levels. The news of the ‘big find’ even caused a few tremors at the London stock exchange.

The find, as in most such situations, was purely accidental. In the 1860s, the British planters were clearing forests in the Wayanad region for coffee estates when traces of gold workings attracted their attention. They also saw gold being panned from rivers and streams by the adivasis. By 1874, the first prospecting firm, The Alpha Gold Mining Company, had begun operations in Skull reef with paid-up capital of Rs 6,00,000; not a small amount then. Soon after, the British government became interested, sending out experts from the Geological Survey to investigate further. An expert from Australia, one Brough Smyth, was invited to carry out what we would describe today as a ‘feasibility study’. His 1879 report was positive; gold mining was viable.

However, a warning in his report went unheeded. Namely, that the profits from speculation could far outpace the profits from gold itself. Interestingly, that warning came true to the letter whereas his technical forecast was largely proven to be incorrect.

Indian businessmen were not far behind this gold rush. Six Indian companies with a capital of about £261,000 also sprung up. Wayanad became the golden centre of the region, a busy scene with Europeans and natives engaged in arranging their entreprises. A detailed report on this can be found here.

Small villages like Pandalur and Devala blossomed into busy mining centers; substantial buildings, post and telegraph offices, a hotel, a store for the valuable quartz which was to be extracted, a saloon, bungalows for the mining captains, the headquarters of the head assistant magistrate and even a race course on a paddy flat. All made a rather sudden appearance in what was nothing but little clusters of native huts just months ago. 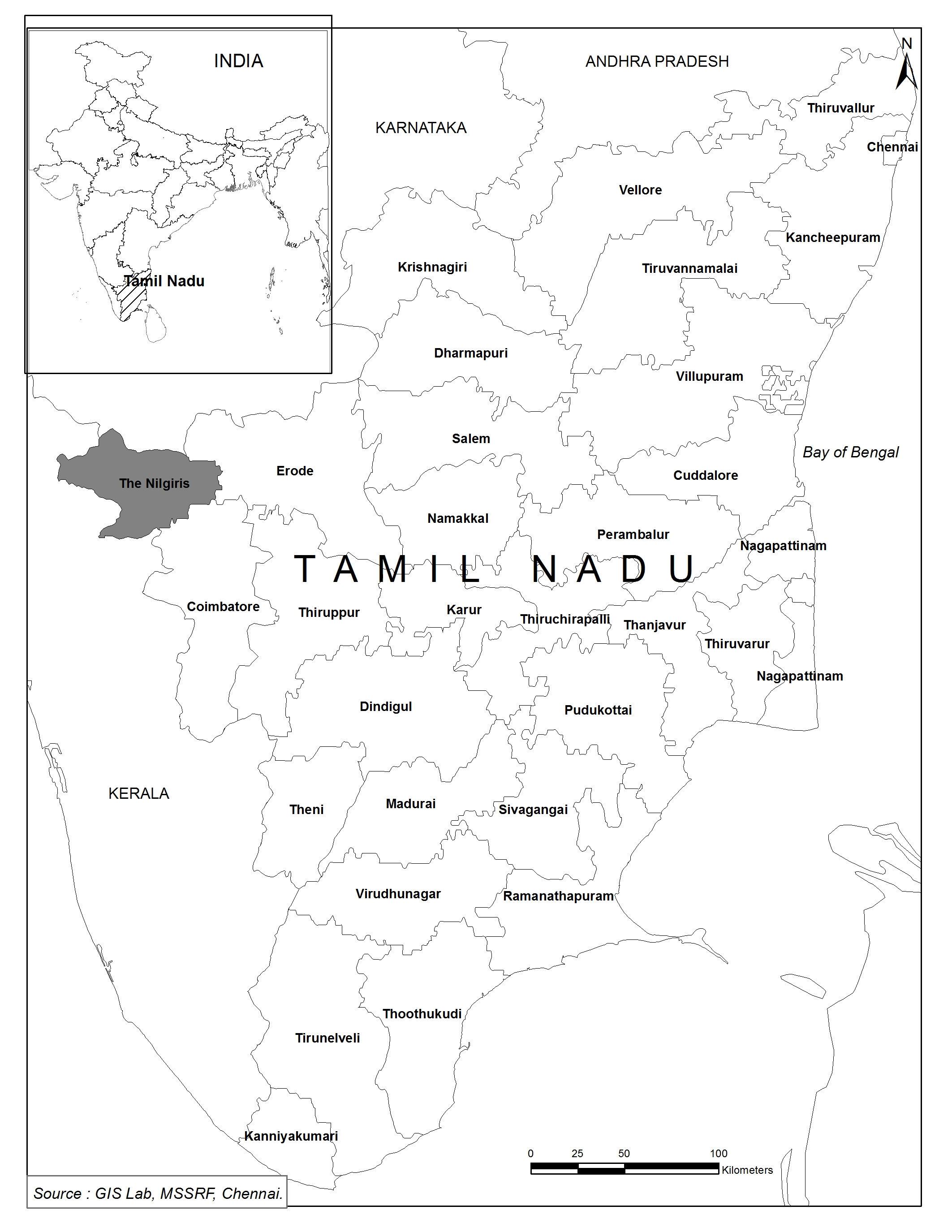 The entrepreneurs brought in stamping machinery the delicate parts of which were often housed in corrugated iron stores. The machines were to be used in the valley as soon as the site has been prepared and the connecting road finished. The region presented all the signs of a gold rush region: new settlements with roads lined with iron pipes, cog-wheels, anvils, stamp heads, sheets, rails, barrels and cases. More labour was needed to run all these; so much that there were even proposals to get labour from China.

It was all happening in Pandalur and Devala; enough for speculators to send share prices soaring even if the first deposits of gold were yet to be found. Cable messages streamed into England: “the whole mountain is worth putting through the stamps, four feet of magnificent reef exceedingly rich in gold, grand discovery … Needle rock reef turning out very rich heavy gold.”

Mining “experts” including even a baker and a clown, financial agents, company directors, all worked together making technical reports on the quality of the ore, drawing up attractive prospectuses, inducing the public to subscribe, forcing up the value of shares and then selling out their own holdings at the top of the market. Even Smyth, contrary to his own warning, joined the party. He was appointed manager of two of the companies. Company stocks were quoted at up to 100% premium even before the machinery had reached the sites and reefs opened up. The delay in the commencement of crushing operations began to dampen sentiments by mid-1881 until a much awaited cable announcement came to London from The Alpha Company. Crushing had begun and results showed up to 4 oz. of gold to the ton. The markets went haywire. The Alpha Company’s £1 shares shot up to £15 and others began climbing up and reaching premiums of even 400 to 500%.

Then, like all bubbles, this one too finally burst. In July 1881, the manager of The Alpha Company explained that the 4 oz. per tonne was the yield of one tonne only. The next 19 tonnes had given just 2 dwts. of gold. This was the beginning of the end. Share prices dropped by 200 to 300%, never to recover again. The bad news began pouring in: 3,500 tonnes had yielded only 9,641 dwts. in another mine and yet another had spent £70,000 and produced only 7 oz. of gold. The coffin for the gold mining industry was sealed when a study by the Geological Survey conducted under an order of the government of India arrived at a conclusion that “with the methods at present available … there is no hope of gold-mining in Pandalur-Devala becoming remunerative.”

Most of the companies soon passed into the hands of liquidators.

Some 30 years later, W. Francis’ Nilgiri Gazetteer reported that at Pandalur, only three or four houses, the old store, and traces of the race-course could be seen. At Devala, a grave or two was left behind, derelict bungalows topped the many little hills and hidden under thick jungle were heaps of spoil and long-forgotten tunnels used only by she-bears and panthers expecting an addition to their families. Lakhs worth of rusting machinery, never erected, was also left behind. Wayanad presented the most mournful scene of disappointed hopes in the entire presidency.

The failed gold mining rush had also taken its toll on another activity: the local coffee plantations. Francis Ford provides a passionate account of the destruction of coffee estates on account of the gold rush. As the district became the scene of the wildest, maddest and grossest speculation, planters threw aside the pruning knife, and seized the hammer. When they should have been among the coffee plantations, superintending useful work, they were on the hill chipping boulders in search of gold nuggets.

New to the country, the gold mining companies also paid the labourer anything he asked for as the planter could not afford to enter into competition with them. When the planter could, he sold his coffee plantation to a company for a handful of gold and some shares. Coffee yielded a measly 10-20% return when compared to gold. An hour of gold mining would give richer returns than an acre of coffee in a year. Pandalur-Devala had essentially became one big mining camp and the fever raged furiously.

When the end came, it was violent. Thousands of acres of coffee gardens had been thrown out of cultivation. There was not an estate which had not suffered, either from its owner having been seized with the gold-fever, or from it having been impossible to find labour. 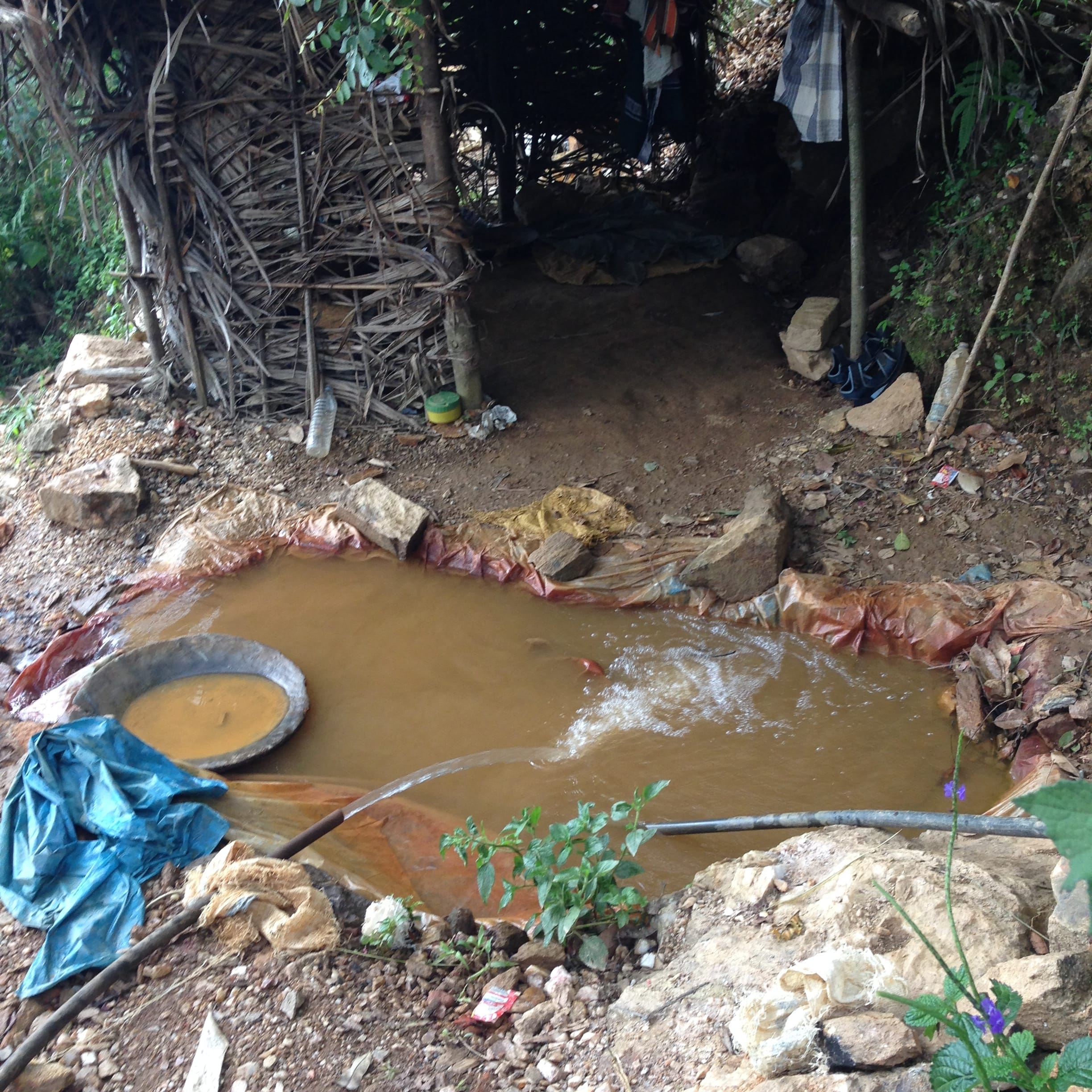 The damages were not confined to the district itself. Large amounts of land had passed into the hands of public companies. When the mining boom was over, they had lost the confidence of the public and the valuable plantations, which they had acquired, were abandoned. Lantana and scrub overran the fields, the roads were blocked with briar and thorn, ruined bungalows crowned the hills and in the old stores and out-houses tigers had their lair. The credit of the district suffered severely too. Once a lively haven of speculators, the Pandalur-Devala region now repulsed investors. The capitalist would have nothing to do with the region, and the industry was condemned only after 40 years.

The coffee estates were dead and the mining industry which killed it was also dead. As the history of this gold rush receded into memory, tea plantations slowly replaced coffee estates.

Gold, however, is still mined but now by new actors: adivasis, often turned into landless labourers through the process of social transformation, together with repatriates still dig in search of that elusive nugget. They live on the edge of the mainstream society, a life of digging, crushing and panning might yield on an average a few hundred rupees per day, if luck permits then perhaps a thousand rupees but when angry, the miners may not even a earn a single rupee.

The hazards in the tunnels, direct contact with mercury, sludge flowing through the streams – all these highlight how no one cares for the land that feeds them. Yet, hundreds of families to this day keep on digging, driven by the hope of finding a nugget of gold at the end of a tunnel.

A research paper based on the authors’ work was recently published in EPW.

Amalendu Jyotish is a professor at Amrita School of Business. Kuntala Lahiri-Dutt is a senior fellow at Crawford School of Public Policy in the Australian National University (ANU). Sashi Sivramkrishna is author of In Search of Stability: Economics of Money, History of the Rupee, Manohar, New Delhi, 2015.