A Battle for the Soul of Pakistan

Sehwan Sharif and other shrines in Pakistan are being targeted for terrorist attacks because militant Islam feels threatened by the popular adherence to Sufi Islam and values. 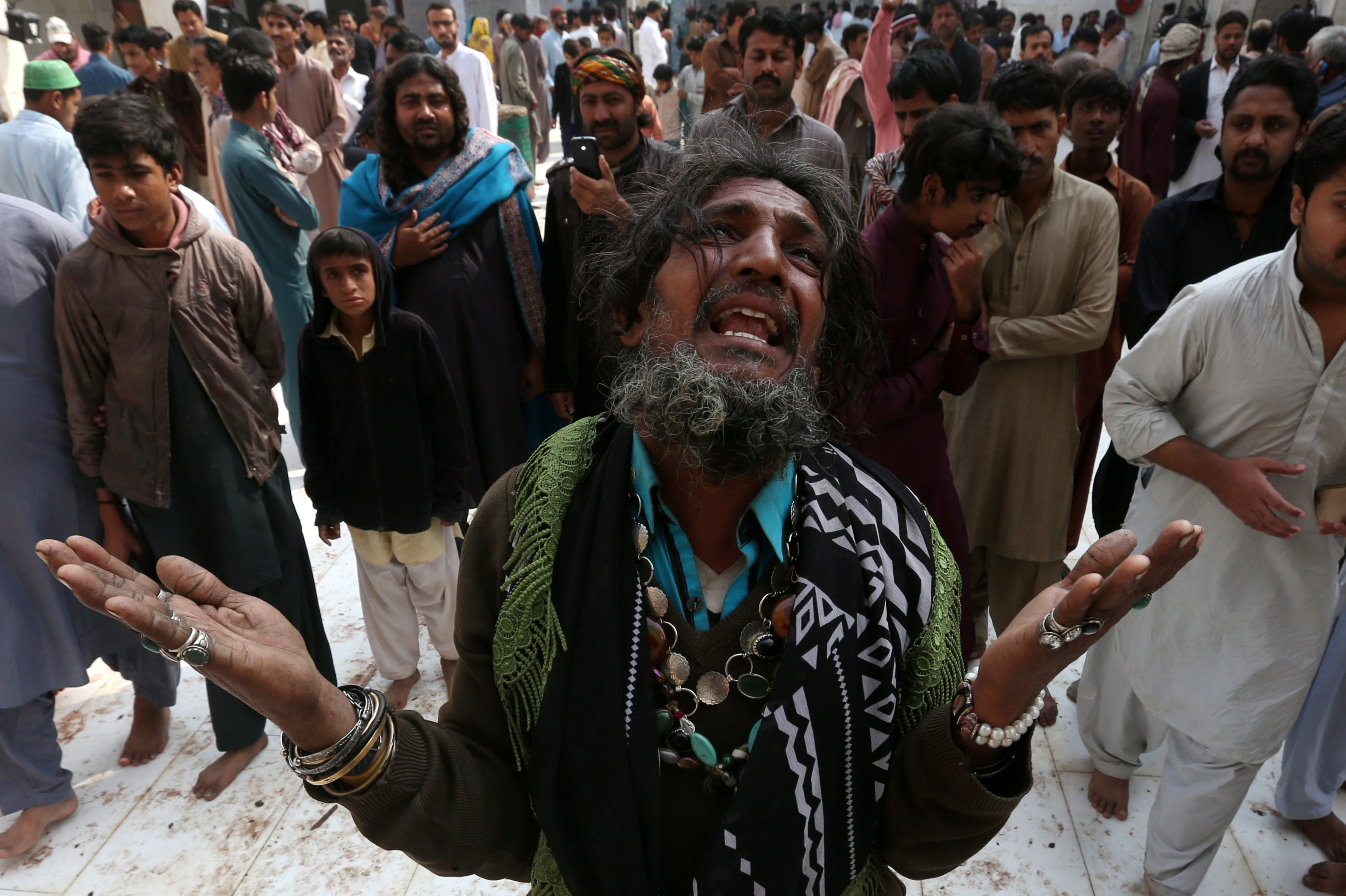 A man mourns the death of a relative who was killed in a suicide blast at the tomb of Sufi saint Syed Usman Marwandi, also known as the Lal Shahbaz Qalandar shrine, on Thursday evening in Sehwan Sharif, Pakistan’s southern Sindh province, February 17, 2017. Credit: REUTERS/Akhtar Soomro

I wonder if the bangle sellers outside the shrine are alive. I still have some chunky glass bangles I bought, bargaining more for the sake of it than to save money.

Did the woman bouncing a little girl on her shoulders, chanting and dancing to an inner beat before the drums sounded, go back last Thursday? Did they survive the blast?

I saw them one Thursday last April when I went to Sehwan Sharif with friends from India who were in Pakistan to attend a wedding. Every week, the day before the Muslim holy day, Friday, draws the most crowds at the Sufi shrines that dot the landscape across South Asia.

Devotees believe that you only go to the dargah – the shrine built over the grave of a revered religious figure – when you are “called” to do so. I have been “called” to Sehwan Sharif several times.

These Sufi dargahs are a symbol of the region’s syncretic culture – the unique blend of Islam with local cultures. It was the Sufi philosopher-poets’ teachings of peace and love that led to the spread of Islam in the sub-continent. It is what today’s hard-line Islamists who draw their stark puritan ideology from Wahhabi teachings, are trying to counter.

Over the past few years, massive madrassas have cropped up throughout the province, funded by Saudis and other sources. These huge buildings look threatening and unfamiliar in a landscape where the traditional mosques have delicate minarets and people of all religions and sects have lived together peacefully for centuries.

In Sehwan last April, dressed in red, a red clip tying her dark hair back, the little girl I saw on her mother’s shoulders looked bemused as dusk fell and the dhamal – the dance that sends devotees into a trance – picked up. Over the din of the chanting and the drumbeats, she gazed sleepily over the crush of people around as she held on to her mother’s dupatta-covered head.

In the courtyard at Sehwan Sharif. Credit: Siddharth Varadarajan

The woman waved her right arm overhead in a circular clockwise motion, clutching the handle of a tin mug and crumpled tissue paper, her forefinger extended to signify ‘the one’ – the highest power. All around them, hundreds of others were in a similar trance, heads down, eyes closed, arms overhead, forefingers extended in submission and homage to the Almighty.

This must have been the scene when a suicide bomber chose this past Thursday to strike the dargah of Hazrat Lal Shahbaz Qalandar after evening prayers. Perhaps he was already seated in a corner before the crowds filled the outer courtyard over which towers the golden dome that characterises this shrine.

Hindus, Christians and Sikhs also frequent dargahs and tie bits of thread to wooden or marbled lattices and pillars at these shrines. But the vast majority of those found there identify themselves as Muslims, expressing their faith in a manner that is uniquely South Asian. Most are poor working class people who lead hard lives – farmers and labourers, with few material possessions.

Many are women, for whom these shrines provide space for self-expression that mainstream culture denies them. Here they can lose themselves in a dhamal. This is where, despite the crowds, they have the luxury of being able to concentrate on thoughts that the rigour of their daily lives doesn’t leave room for. The dargah is a kind of confessional where you can be yourself without being judged.

But social media and orthodox militancy are closing these traditionally non-judgmental spaces. Cell phone cameras are shattering the privacy of the dargah. And militants who see these spaces as heretical have, since 2009, been targeting them.

Following the attack on the Sri Lankan cricket team in Lahore on March 3, 2009, an Indian journalist friend commented that cricket is “the most visible icon of secular Pakistan, and perhaps the only competitor militant Islam faces in its struggle to tame the wayward Pakistani mind”.

I had emailed him saying that there is “another, even more deep-rooted competitor militant Islam faces – the widespread adherence to Sufi Islam and values, superstition, taweez, dhaga (tying thread, getting amulets)”.

The fear that the militants’ next target would be a Sufi shrine was borne out the very next day. On March 5, 2009, militants used remote control bombs to attack the shrine of the 17th century Sufi poet Rahman Baba on the outskirts of Peshawar.

Rahman Baba is considered the icon of Pashtun spirituality, symbolising their love for peace and tolerance. Many Pashtuns in their homes keep Rahman Baba’s poems alongside the Quran. “Saidu Baba, a revered saint from Swat valley, is known to have said that if the Pashtuns were ever asked to pray on a book other than the Quran, they would undoubtedly go for Rahman Baba’s work”, comments Yousaf Ali Dilsoz, president of Rahman Baba Adabi Jirga.

The caretaker of the shrine had received a letter three days earlier, warning against the perpetration of this “shrine culture” and objecting to the fact that women were coming to pray at the shrine.

The attack, which claimed no lives, took place just before dawn and damaged a corner of the shrine. Other attacks at shrines around Pakistan have been deadlier.The so-called “Islamic State” – Daesh as the Arabs call ISIS – that claimed Thursday’s attack on the Qalandar dargah, is so far the most extreme of the groups that have morphed from the Wahhabi ideology that the United States, Saudi Arabia and Pakistan used to counter the Communist Soviets in the Afghan war of the 1980s.

Supported by Washington and Jeddah, Islamabad had its own political, financial and foreign policy objectives for supporting the Mujahideen. The Taliban, indoctrinated in the madrassas that cropped up during those times stepped into the political vacuum in post-war Afghanistan. Their view of Islam took even further the version they had been indoctrinated in. After their defeat, they splintered into various factions and swelled the ranks of myriad militant groups in Pakistan.

Even now, rather than acknowledging the home-grown nature of the problem, the Pakistan security establishment is trying to blame outside sources for attacks like the one on the Qalandar dargah.

There are many differences between militant groups but one thing they have in common is a belief in the right to physically eliminate those with whom they disagree. Their version of Islam ignores the compassion, justice and peace that the Quran repeatedly emphasises.

They oppose the “shrine culture” that they see as grave-worshipping. They oppose any grave markings to begin with, fearing that this may lead to the worship of anyone other than Allah. In 2014, the Saudi government even proposed destroying the tomb of the Prophet Muhammad, on Him be Peace, but the plan seems to be on hold after universal outrage.

They consider the South Asian Muslims’ reverence of the writings and poetry of the Sufi mystics to be heretical.  They oppose the presence of women at public places. There is no bar on women entering the inner-most sanctums of dargahs in Pakistan, unlike India where activists have had to fight such restrictions imposed by recent orthodoxy.

Of all Pakistan’s provinces, Sindh traditionally has the strongest, most inclusive and tolerant syncretic Sufi culture. That is clearly something the militants are desperately targeting.

The attacks on Pakistan’s Sufi shrines is part of a larger strategy that aims to grab political power. This includes the kidnapping and forced conversions of Hindu girls, the misuse of ‘blasphemy’ laws, targeted killing of Ahmadis, Shias, and anyone these extremists consider ‘deviant’ from their version of Islam.

In this they are supported by people like the hardliner Mullah Abdul Aziz of the infamous Red Mosque in Islamabad – who justified the massacre of over 140 schoolchildren in Peshawar on December 16, 2014. Local militants are also gearing up for the upcoming death anniversary of Mumtaz Qadri, hanged on March 5, 2016 for murdering Punjab governor Salmaan Taseer.

In this battle for the soul of Pakistan, the militants are on the wrong side of history. As Syed Waqar Shah Latifi, a descendent of Shah Abdul Latif Bhittai of Bhit Shah says, “there is no way” the militants will eventually prevail.

But along the way, be prepared for the loss of many more lives. I hope the little girl in the red dress is not among them.