Outside the Window, the Beat Within

About the festive pulse of a city, and unspoken celebrations of the heart. 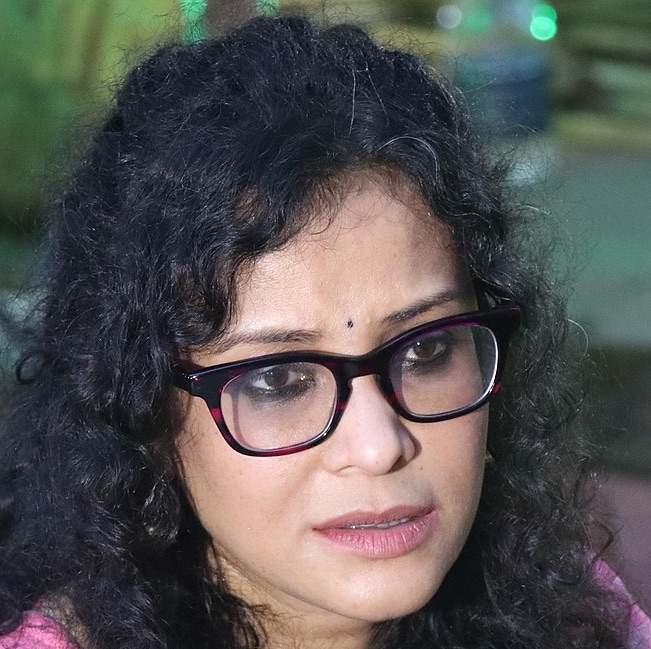 Note: This piece was originally published on October 30, 2016.

Lata is late again.  I scramble around in panic, throwing towels over books, dragging buckets and pans under ever-multiplying leaks in the ceiling. Rain hammers down with the roar of ten thousand drums.  Where could she be?  I can’t be late for this meeting… Plus it’s visarjan.  Traffic mayhem.  I shut my laptop down and cram it into my bag.

Lata breezes in fragrantly, three bedraggled champas in hand.  Like her, they’re soaked and a little muddy.  To my horror, she puts them in her hair.
“Where did you find those?”  I bark out in shock.

“On the street, where else?”  Lata’s answers are always questions.

“Sundari, they are dirty,” I plead, using my nickname for her.

“Why?  The rain gave them a proper dholai, no?”  Lata giggles.  “Yes it’s muddy, but it’s lovely outside. When was the last time you looked out the window?  Really?”

Lata’s bangles jangle reproachfully as she starts banging plates around. She’s a fabulous girl, with every kind of beauty that more than justifies the nickname, but terrible with the dishes.  I secretly re-wash them every day after she leaves.

“AIYO!”  She yells as I rush to grab the lift.  “Will you listen to that RACKET?”

Which one, I wonder, while Lata thunders on happily: “LOUDER than a hail storm, na?”

As I sprint to my cranky car, praying to Ma Durga that it starts, I get flashes from my first encounter with hail, which was as unseasonable as it was ill-timed.  Diwali, or Kaali Pujo in Kolkata, dedicated to the Goddess’s avenger avatar.  On an absurdly rainy Diwali day, I watched lightning make strange broken figures dance on the pane, like stick puppets.  Suddenly Ma burst into the room, eyes flashing like sparklers.  She dragged Didi and me into the balcony, only to get bombarded by tiny pellets that were surprisingly painful.  “Sheel porchhe!” Ma cried, as we jumped around in pure wonder, creating our own shadow dance of arati for the Goddess. We reached up into the sky to catch as many of the slippery little balls as we could hold in our hands, gathering them in an abundant anjali of hail. I don’t know why we felt such an urgency to collect the sheel, knowing they’d disappear just as suddenly, and inexplicably, as they had appeared in our cupped palms on that dark afternoon of worship.

After some coaxing, my car grudgingly splutters along the road.  The rain is less brutal now, but an endless procession besieges us with drums, trumpets, and “Tenu Kala Chasma.” And all cars come to an unquestioning halt.  A girl in a baggy kameez crosses the street: no more than 15, eyes lined with kohl, baby clutched to breast.  Suddenly the rain speeds up, making devotees scramble in every direction.  The girl quickly lifts her dress, covers her child.  Her eyes catch mine and immediately focus. ‘When was the last time you looked out of the window?’ Credit: Ita Mehrotra

“Where’s your other earring, Didi?” she asks as I reach for my wallet.   In my hurry I’d flung on only one silver hoop.  The moment I take it off, she pounces.“Give it na?  Diwali gift?”

Surprised, I hand it over. She immediately slips it onto her daughter’s frail wrist.  A perfect baby bangle.

Years ago, my sister and I had invented a game about scales in life.  We’d pass a big bath shop in Lansdowne Road, and Didi would yell, “I spy – a giant’s soup bowl!”  I’d have to find it in seconds – ah, that huge jacuzzi at the window!  Lighting diyas before Diwali, a solemn ritual overseen by our strict grandmother, I’d whisper, “I spy – a lilliput’s walking stick!”  In a jiffy, Didi would pick up a used match. She came back from the US with a flawless miniature umbrella, saved from her first (if untouched) pina colada. Didi had ordered the drink just so she could bring me a lilliput’s parasol.

A bus honks in my ear.  An elderly man clambers out of it with some difficulty, newspaper stuffed under his arm, book in one hand, rebellious umbrella in the other (a little larger than the one I’d just remembered).  The book almost slips out of his grasp, so he lets the umbrella go, which gaily spins into the monsoonal sky… Years ago, another umbrella had flown off in an embarrassing whirl, exposing my first almost-kiss to all of Eighth Grade…  As the man staggers after the umbrella, the newspaper splashes down into mud. But he clutches on to his book for dear life.

On my way to school, I’d see an old man on the tram every day, reading a big red book.  The letters on the cover looked like English but were inverted, or conjoined like Siamese twins.  One day, caught in traffic as bad as today’s, I was watching a roadside puppeteer manoeuvre his dolls, Ma Kaali and Shib Thakur, into a hilarious fight.  When I laughed, the old man peered at me over his glasses.  “What language are you reading?” I blurted defensively.

“Russian,” he answered, in a Siberian tone.

“Oh! Tolstoy?  Dostoevsky?”  I hadn’t read them yet, but was proud to know the names.

“It’s a dictionary,” he replied without taking his eyes off the page.

I was flabbergasted. “But… why?”

The old man sighed, realising I wasn’t about to stop.

“Which one?” I persisted.

He gave up and closed his book.

I stared at him, perplexed.

“I do know I’ll remember it when I see it,” he added confidently.

“Do you know what letter it starts with?”  I asked, my consternation rising.

He shook his head. “But I know what it means.”

“Then you need a thesaurus, not a dictionary!”  I cried.

“I can’t find a Russian thesaurus in Kolkata.”

This time we sighed in unison.

“Life,” he said simply.  “But not the regular word for it.  It’s archaic, not used anymore.” To this day, I can’t decide if the old man’s quest was beautiful or immeasurably sad.  He didn’t even notice Shiva and Kaali’s tantalising tussle.  Wasn’t life itself passing him by as he searched for its obsolete synonym?  Did he ever find it, I wonder, and if so, did repossessing that word make him feel life more intensely?  My poet grandmother, meticulously passionate about words, told me once that words didn’t matter. Feelings did.

Drums throb all around me now and engulf me completely, getting bizarrely louder and louder as the procession moves further away, until all that remains of me is a beating heart behind a steaming window under melting skies in a frozen city.

My grandmother liked my teen sweetheart, and though she trusted us enough to let us burn fireworks on the street late into Diwali night, Dimma wouldn’t allow us alone in my room at any time of day.  So, every day after school, rain or shine, my love and I would walk to the Buddhist monastery by the lake, to listen to the rhythmic roll of the huge flat drum.  Meanwhile, Dimma continued giving me rigorous lessons in moral rectitude.  Not long after that, I was flying to America for college.  After a teary goodbye, Dimma suddenly called me back.

“Shut the door,” she said with uncharacteristic urgency.  “Remember the boy-girl stuff I told you?”

I nodded reassuringly.  I could see she was stressed.

I stared speechless, as my poet grandmother effortlessly dismissed the significance of words, which were the very   foundation of her own celebrity.  “Feelings are much more important,” she whispered.  “Enjoy every moment, every feeling – no matter what happens later.”

This was the matriarch who heartlessly dragged us out of bed every year before dawn, to listen to each word of the yearly broadcast of the Mahalaya – as every radio in the neighbourhood broke into exuberant prayer, celebrating the birth of the perfect Goddess.  That day, realising that distance would not allow her to guide me through my coming of age, Dimma had tried, with all her heart, to facilitate the inevitable birth of one (imperfect) woman.  Little did she know that the birthing in question would prove to be impossibly long and laboured – and as yet, incomplete.

A month after I left home for college, the phone rang at 5.30AM in Cambridge, Massachusetts.

“Hello…” I mumbled groggily.  “Is it Mahalaya?”

“NO, stupid!” Ma roared.  “It’s 3 in the afternoon and the Dhakis just arrived.  Can you hear their drums?”

I sat up, suddenly wide awake.  Sure enough, I could hear their drums of celebration – booming in my heart, vibrating across continents, bursting through rain clouds thousands of miles away.  Like our quiet drum in the monastery, echoing in my first love’s heart, every gong reverberating in my ear pressed to his chest.  Like the carnival drums of Visarjan pulsating around me in every direction.

Lata was right – when was the last time I really looked out of the window? As I watch the old man chase his umbrella, and the child-mother tackle the next car, traffic comes to a surreal standstill.  Drums throb all around me now, engulfing me completely, getting bizarrely louder and louder as the procession moves further away, until all that remains of me is a beating heart behind a steaming window under melting skies in a frozen city.

We all hear it, don’t we, each in our own way?  That ceaseless drum beat – don’t you hear it too?  When you pick muddy flowers off the street?  When you yearn for long-lost words, or newfound hail?  When you crave the garnish more than the cocktail?  When you insist on loving every incidental feeling?  Or every accidental baby?  Yes, you do. It may be hard to listen to it through the noise, but you hear it.  You’re hearing it right now.

Nandana Dev Sen is a writer, actor, and child-rights activist. She writes books for children, and works closely with RAHI, Operation Smile and UNICEF to fight against child abuse.

The author tweets as @nandanadevsen and is on Facebook. Her Youthquake stories will appear in The Wire every month.