To set the record straight, Hindi is not even the national language of India, but is a link language like English. 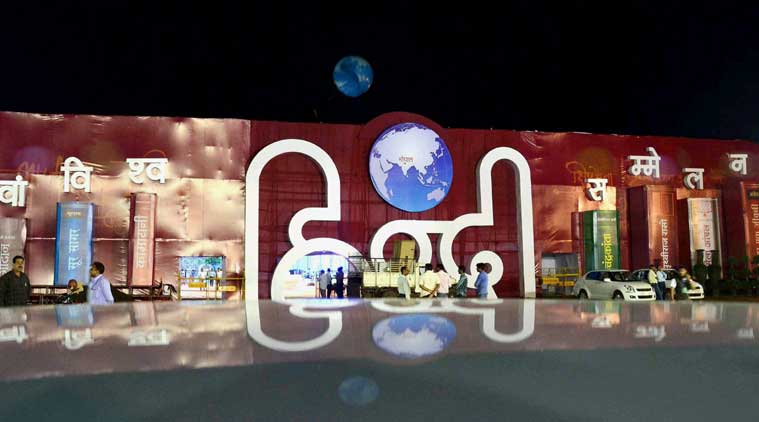 The tenth World Hindi Conference was held in India after a gap of 32 years in Bhopal in October 2017. Credit: PTI

In a bid to win make Hindi an official language for India in the United Nations, the government is planning to spend up to Rs 400 crore. Such news is likely to create a kind of euphoria among so-called Hindi lovers who are constantly seen cherishing a grudge that Hindi has yet been unable to be accorded the status of a national language, something which most of them incorrectly think is part and parcel of the constitution.

In reality, Hindi is one among 22 official languages and is considered a link language along with English.
But in a vast, diverse and ancient country like India, it is not the official status which decides the fate of any language – it is social acceptance which matters most. In this context, ironically, English dominates. It guarantees bread and butter, provides a sense of superiority in society and allows people to enter the circles of power.

In short, it has become the language of knowledge and empowerment. Calling it the “milk of the lioness”, BR Ambedkar had underlined to fellow Dalits just how imperative it to learn English to move ahead in the world.

The politics of language

The real irony lies here. English, with its special status, plays havoc to all Indian languages, particularly Hindi. It has reduced all other languages into dialects in which only poems, short stories and novels may be written; TV serials and films may be produced and political fights may be fought. But the real knowledge, the real power, the real politics lies in employing English.

In this context, the politics of language played by the central government is both interesting and intimidating. When you go to the UN demanding official status for Hindi without acquiring national status here, you create confusion, chaos and contradiction among other languages.

On the one hand, the Hindi heartland supports the cause with great nationalist zeal. On the other, different languages start anti-Hindi agitations in their respective areas and states. We can witness the same politics of hate on the basis of language being played on the basis of religion. In the end, all this only serves to strengthen the belief that English is the only link and language which may keep the nation as one.
Certainly English has its uses and utility – it is the link language of elite India also.

It is also our link to the sources of knowledge – the entire Indian administrative and academic system is based on English. But there is a catch: it has created a divide, a distinct line, between the ruler and the subject. It reminds one of Jean Paul Sartre’s famous preface in Franz Fanon’s book Wretched of the Earth in which Sartre begins with these ironical lines before describing how the natives too began to speak their own language to narrate their own stories:

Apart from the official status and link-language phenomena, Hindi and other Indian languages have created their own bridges in their limited literary and intellectual resources. All Indian writers are viewed as Hindi writers despite writing in various languages as they are translated into Hindi. Amrita Preetam, Gurdayal Singh and Kartar Singh Duggal write in Punjabi; UR Ananthamurthy and Girish Karnad in Kannada; Vijay Tendulkar and Naamdev Dhasal from Marathi; Sharatchand, Vimal Mitra, Badal Sarkar and Mahashweta Devi in Bangla; Pritabha Agrawal in Odia, Indira Goswami in Assamese and so on. You can add authors like Takashi Shivshankar Pillai and Pannalal Ghosh and many others to this list. Even Urdu poets like Ghalib, Meer, Iqbal, Firaq, Faiz and novelists and short story writers, Saadat Hasan Manto, Ismat Chughtai, Qurratulain Hyder and Krishan Chander are Hindi writers, as are RK Narayan and Arundhati Roy.

In this sense, there are no boundaries. Premchand, Dharamvir Bharati, Mohan Rakesh and Kunwar Narayan are well read and received in different languages. They try to learn and understand each other and find it easier than learning some foreign language.

But the problem begins when zealots of language – especially Hindi – claim that they are superior to others because of sheer numbers. When they try to send Hindi to the UN as a single Indian language, it offends those who speak other languages, forcing them to seek the protection of English and thereby fulfilling the agenda of elitist India.

Hindi has created one more gulf. The three-language formula was an opportunity for us to come closer to other languages. We could have learnt Marathi, Tamil, Telugu and Bangla instead of Sanskrit as the third language. Sanskrit should have been a separate subject as a classical language. It could have created jobs for other languages in the Hindi heartland and for Hindi in Southern or Western India. Governments must understand that languages are not emotional issues, but reflect the psyche of a society. If we want to promote Hindi and other Indian languages, we would have to create opportunities of employment in them; we will have to make them the medium of education.

We would have to develop an environment of mutual respect which is possible only if we could nurture a sense of equal opportunity in them. But instead, while attempting to promote Hindi at the international level, we are rapidly opening one English medium school after the other from Uttar Pradesh to Gujarat. It is all part of the same nationalist agenda which excludes other societies and languages and creates a false sense of pride.

The government’s plan must be opposed, as Shashi Tharoor made clear in parliament during a heated debate with external affairs minister Sushma Swaraj, because it is divisive. As someone had once written: “Vo Hindi ki Chindi ki bindi lagaa kar/Sare aam ahle karam ho gaye/Junun men uthe, vishwa tak dour aye, magar qad men pahle se kam ho gaye (They, putting the bindi of the rag of the Hindi, became the person of compassion. Rose and ran across the entire world crazily, but became more short-heightened than before).

Priyadarshan is a Hindi novelist, critic and journalist. He has published nine books, including two short story collections and one poetry collection. He has also translated a number of authors into Hindi, including Salman Rushdie and Arundhati Roy. He currently works with NDTV India.