The Year That India Stood On Two Diverging Roads

2016 has had all the makings of a turning point in Indian history. What will 2017 hold? 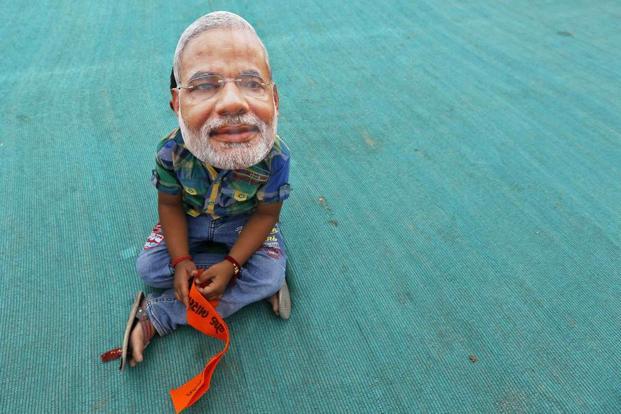 A boy wearing a Narendra Modi mask sits as he waits for the start of an election campaign rally being addressed by Modi in Kheralu town in Gujarat. Credit: Amit Dave/Reuters/Files

In an increasingly polarised world, it is ironic that the word ‘post-truth’ was picked as the word of the year. The Oxford dictionary defines post-truth as “Relating to or denoting circumstances in which objective facts are less influential in shaping public opinion than appeals to emotion and personal belief”. The origins of the word, however, lies in a questioning of objective reality – the product of a liberal academic tradition that believes in a multiplicity of realities.

In 2004, Ralph Keyes wrote, “In the post-truth era we don’t just have truth and lies but a third category of ambiguous statements that are not exactly the truth but fall just short of a lie.” He suggested that the line between truth and lies was blurring.

The irony is that as the true-false binary disintegrates in the era of post-truth politics, politics itself is getting deeply polarised – be it Trump and Clinton, or Brexit’s Yes and No camps. As William Davies notes, “How can we still be speaking of “facts” when they no longer provide us with a reality that we all agree on?”

The rise of post-truth politics has been linked to the rise of populism. While the word has largely been used in the Western context, we in India can claim some degree of familiarity with it too.

How else does a man who has been standing before an ATM for hours declare undying devotion to Modi?

Like Dickens said, “It was the best of times. It was the worst of times.” It is either ‘acche din’ or the looming threat of a Hindu rashtra, depending on where you are standing.

There is no denying that Hindutva has crept up on us little by little. Beginning with Muhammad Akhlaq being lynched in Dadri in 2015, gau rakshaks became part of our daily lives in 2016. Every morning, at exactly 9:30 am, a van passes by the street below my house declaring that it is my duty, and the duty of every citizen, to participate in the noble cause of cow protection.

It doesn’t matter if Modi denounces cow vigilantism – it’s a token gesture in the face of the murders and assaults we have seen so far  and the gau rakshaks know this. Emboldened by a political culture that reinforces their beliefs, they are convinced of the legitimacy of their actions.

Ideological dissidents are seditious and must be sent to Pakistan. Kashmiris are being detained indiscriminately under the Public Safety Act. People are being forced to stand for the national anthem or risk the possibility of assault. Law is being abused to create a culture of fear and encourage intolerance. Power is being misused to intimidate those speaking up for rights into silence.

In the conflict between ‘bhakts’ and ‘anti-nationals’, the political rift has widened into cultural and societal fissures as well. We have reinforced a culture of binaries in 2016 – and nothing demonstrates this better than the term ‘anti-national’.

Despite the suffering and hardship that demonetisation has inflicted, the prime minister is still actively constructing a narrative of success. In a gross manipulation of fact, the NAMO app claimed that over 93% of the people supported demonetisation – all the while, hiding in small print, the fact that it was 93% of app users which in reality is a very small fraction of the population. 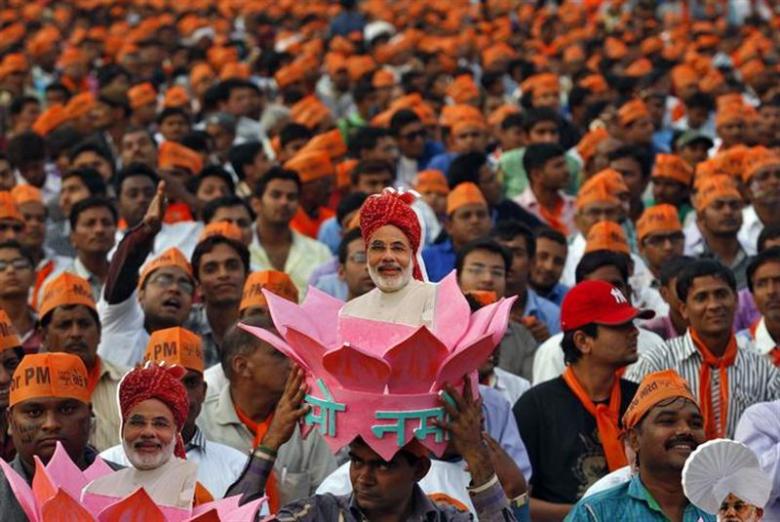 A supporter of Gujarat’s chief minister Narendra Modi  wears a headgear with a portrait of Modi. Credit: Amit Dave/Reuters/Files

Meanwhile ludicrous exercises to rewrite history to support the Sangh Parivar’s politics have been plenty. They may search for the Saraswati all they like [they won’t find it] and say that the Harappan Dancing Girl is the Vedic goddess Parvati – but as renowned historian D.N. Jha told The Wire, these are instances of Hindutva imagination running amok.

There is an effort to fabricate a narrative of consent, culturally, to generate political support for the ruling dispensation and blurring the lines of reality is helping this process. Demonetisation will make the nation stronger, says the prime minister. Whatever the reasons behind his ‘surgical strike’ on black money may have been, he made sure that notebandi, like much else, was sold to the public with a heavy dose of patriotism. The garb of nationalism is their instrument to deter dissent.

The RSS’s ethos of unquestioning obedience and obeisance is being imposed upon a population which is expected to accept their ‘truth’. At this point, it is not difficult to believe that the absurd theatrics of the Sangh parivar can take a dangerous turn towards authoritarianism.

Media hysteria has not helped either. The Indian media has drawn out battle lines and stood divided on issues like never before. Rationality be damned – in the post-truth era, it’s all about ‘doctored’ videos and ‘befitting replies’ of vengeance. We live in an age with a glut of information. It isn’t hard to find ‘facts’ that support – and project – what you want to believe in.

I think there is global consensus that 2016 was an extraordinarily bad year. And while the situation in India has been grim, 2016 has also been a year of extraordinary resistance too – the year ‘azaadi’ travelled out of Kashmir to become a rallying cry throughout the country.

Students were a force to be reckoned with – the spontaneity with which the students organised mass movements in JNU after Kanhaiya Kumar, Umar Khalid and Anirban Bhattacharya were arrested on charges of sedition, was remarkable. ‘Down with fascism’ was a common chant in these protests, demonstrating again, that you choose the facts you want to believe in. I was a student in JNU at the time and it was not altogether a difficult thing to believe from within the walls of the university. Rumours abound, with the threat of police raids and the possibility of more arrests – the fear was palpable. Added to that were the lies being peddled in the media. It often felt like no one believed us and our voices, our version of events, our ‘truth’ was being deliberately and systematically stifled by the weight of institutional machinery. Reality was made slippery and we were struggling to make our claim on it. 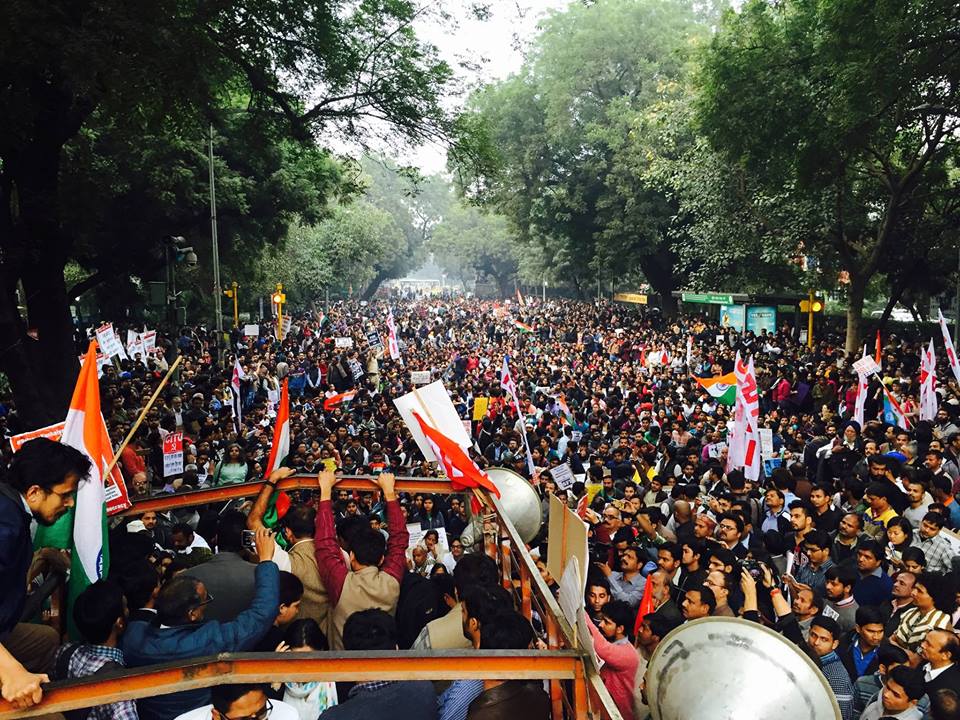 The protest organised by JNU students to demand that the arrested students be released. Credit: Facebook

Also posing a formidable challenge to the BJP’s Brahmanical nationalism were the Dalits in Una, Gujarat. The Dalit Asmita Yatra united all 32 sub-castes for the first time and called powerfully for the end of caste discrimination. Una invited Dalits from all over the country to unite and raise their voice as an oppressed community, consequently organising a spectacular agitation. The movement saw Dalits and Muslims walking under a single banner protesting against the Brahmanical hegemony that enabled a lawless reign of gau rakshaks and turned a blind eye to atrocities committed by them. 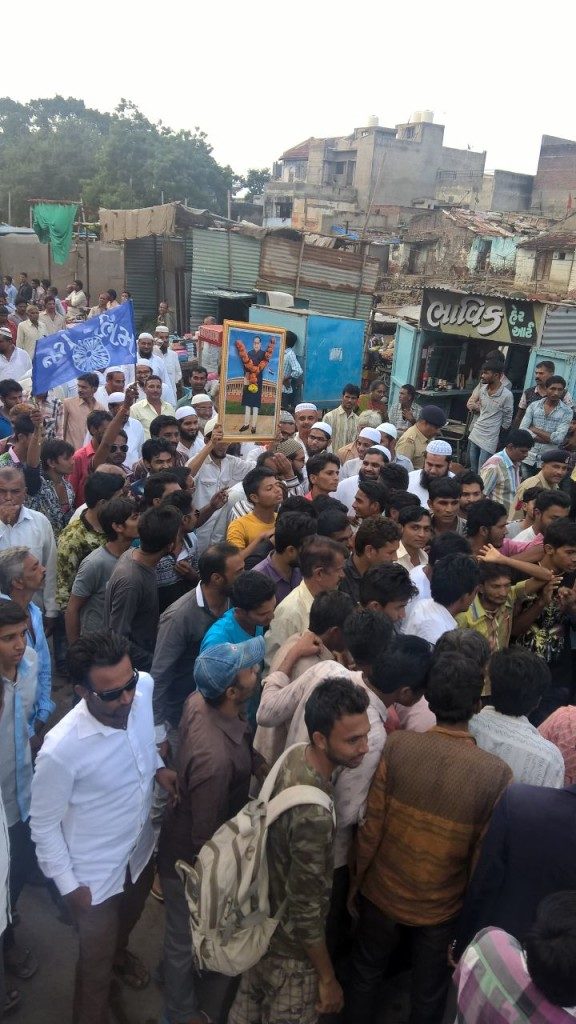 Dalits and Muslims together hold up a picture of Ambedkar in the rally, sending a powerful message. Credit: Damayantee Dhar

There were other instances of protest which may not have been as grand or large scale, but were significant nevertheless, because ultimately, the challenged the narrative of the Sangh Parivar. For instance, a teenager in Madhya Pradesh was arrested for taking to social media and writing against demonetisation. Human rights activists continue to fight against rights violations in Bastar, even as they are being targeted and victimised by a corrupt police machinery. Academics are resisting the increasing saffronisation of education. Journalists are refusing to be silenced even as bans and court cases are being piled on them – because in a post-truth era, fighting for what you believe is more important than ever before.

The road not taken?

If 2016 was about forging chains, it was also about breaking chains. Post-truth might be a revelation this year, but in the process of writing history, the concept has been a persistent presence. History, after all, has always been a negotiation. Various truths compete and compromise to qualify as history. It is almost never completely black and white. Hindutva versus Everyone Else seems likely to continue in 2017. The scales could tip either way at this juncture, but the negotiation between the various shades of politics in the country will not stop. Each camp will continue to try and monopolise truth, or at the very least, claim a sizeable share of it.

“Two roads diverged in a yellow road,” wrote Robert Frost. Years later, two roads are diverging in a saffron wood in India. Which one will we, the inhabitants of a post-truth world, choose?