Miyah Poets in a Destitute Time

As the law turns the people into a population bearing registration numbers, the Miyah poets affirm their being human with poems that bear their names. 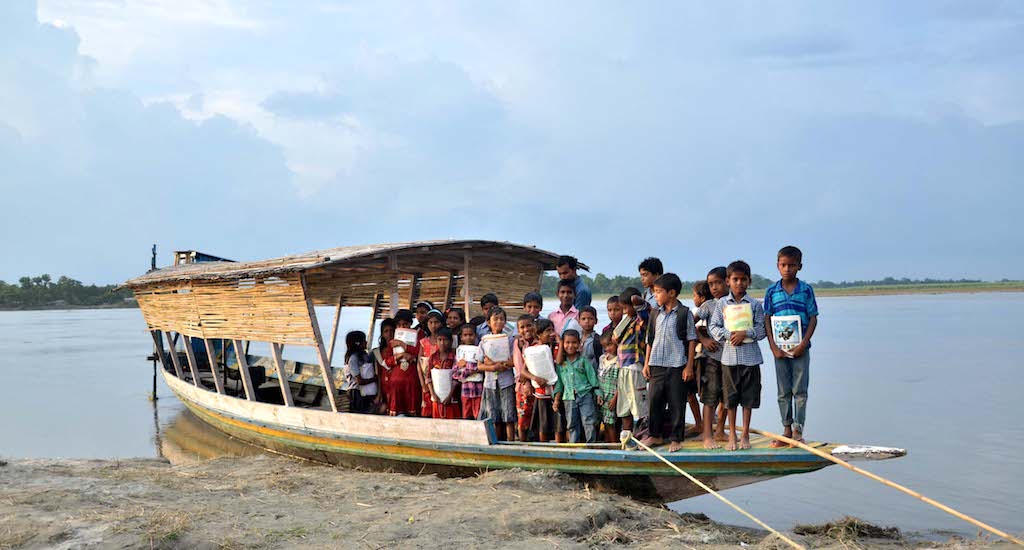 Children of char pose at their boat class on river Beki in Barpeta district in Assam. Credit: Abdul Gani

An FIR was registered by a freelance journalist this July against a group of poets in Assam. Speaking to The Hindu, he alleged that the poets gave the impression that Assamese people are xenophobic towards Muslims. He called the poets “a threat to the Assamese people and national security”. What is instructive is not the nature of the accusation, but how words like “threat” and “national security” come handy today to intimidate people.  If poets are accused of tarnishing a community’s self-image and made to suppress their voices, isn’t that a sign of phobia? Even as the poets got anticipatory bail from the Guwahati High Court, more FIRs have been filed.

Miyah, otherwise an Urdu word for “gentleman”, is used as a slur in Assam, for Muslims of Bangladeshi origin. For instance, we learn of the gendered violence behind the slur in Rehna Sultana’s poem, ‘My Mother’, “I am not a ‘Miyah cunt’ / Not a ‘Bangladeshi’ / Miyah I am.” Shalim M. Hussain, a Miya poet and research scholar in Delhi, said, “We are trying to reclaim the word — that is the main agenda of the community.”

Shalim had translated the poem ‘Write Down I am a Miya’, written by Hafiz Ahmed in April, 2016. That poem had begun the spate of poems that turned Miyah poetry into a unique genre and a movement. There have been poetry movements in India before around social issues and with a political content. The Hungry Generation poets of Bengal in the 1960s come to mind. But the Miyah poetry movement is unparalleled for many reasons.

Here we have a community of Bengali Muslim refugees, battling persecution. They mostly live on wastelands, and sandbars along the Brahmaputra. The community has seen violence during the Assam agitation during the late 1970s. In the Nellie massacre, within a span of a few hours on February 13, 1983, more than two thousand Bengali Muslims were killed. The pictures released in India Today magazine were horrifying, with images of massacred children in rows, waiting for burial. The poets trace the origins of Miyah poetry in Khabir Ahmed’s poem, ‘I Beg to State That’, written in the aftermath of Nellie.

The poem is remarkable for mapping the shifting landscape of migrant labour across the Indo-Bangladesh border. Khabir decries his place as the neglected subject of Indian history. He bears a folk memory, across lands. Migrants are borne-across people, who suffer the crisis of national frontiers. The colonial mapping of India’s borderlands has ripped through their lives. Khabir deploys an apologetic tone in the poem, but affirms two memories that violently tear him apart: the memory of labour and the memory of massacres. Khabir’s poem sways and slips between the disjunctions of memory.

But most importantly, as he recounts his travails, Ahmed takes names: Ismail Sheikh, Ramzan Ali or Majid Miya. Just as in the beginning of Hafiz’s poem, he writes,

What is behind the double assertion of a number and an identity?

A huge number of Bengali Muslims and Hindus have been languishing for years in the extra-legal detention camps that imprison people without proof of citizenship. The National Register of Citizens (NRC), to be released on July 31 or later, has added to this quagmire of refugees as over three million people await the possibility of being declared “foreigners” and face deportation.

Against this looming crisis of gigantic proportions, where an unprecedented mass of people will be declared stateless, the Miyah poets register their names and identity. In the memorial of the Jewish refugee and Marxist intellectual, Walter Benjamin at Port Bou, his view of historiography is etched on the glass in several languages:

Miyah poetry as a genre is devoted to the re/construction of memory. As the law turns the people into a population bearing registration numbers, the Miyah poets affirm their being human with poems that bear their names. When Khabir writes, “After forty years of independence / I have no space in the words of beloved writers”, he points the finger to his missing presence in the literary narrative of the nation.

The Miyah poets write in various languages, including Assamese, Bengali, English and local dialects.  But Assamese intellectual, Hiren Gohain, thinks the Miyah poets are wrong in prioritizing the dialect they choose to write in.  He thinks the Miyah poets drawing international audience and attention will alienate them from their Assamese neighbours. Gohain also questions the representative character of these poets vis-à-vis their community, and calls Miyah poetry “an episode”.

I am reminded of Paul Celan, the Rumanian born, German-language, Jewish poet, who was also a refugee during the Nazi regime. He imbued his German mother tongue with Hebrew and Yiddish influences that had not endeared him to the German literary establishment. Yiddish was considered the lingua franca of European Jewry and had a troubled relation with German before and during Holocaust. Celan’s use of Yiddish, particularly in his famous speech delivered in 1960, The Meridian, where he defined his poetry as “other”, can be read as an act of aesthetic and ethical provocation. By enforcing the encounter between Yiddish and German, Celan created and marked his space as other, between the two languages.

The term ‘Char Chopori’ associated with the Miyah poets is both habitation (described as a “fallow wasteland” where the Bengali Muslim refugees in Assam live), and dialect (which is their lingua franca). For the Miyah poets, their poems speak their otherness within the linguistic landscape where they exist as outsiders. The poems are addressed to both the neighbour and the world, to whoever has ears of empathy. No critic in the world can tell a poet which language s/he should choose from. Language/s choose/s the poet. The Miyah poets summon all the languages they know to make their case. Their poetry interrogates their condition, and helps the world gain access to their unique tragedy. The poets represent a community within a community, and speak for themselves. Their representational status is a matter of undeniable acceptance.

Whether Miyah poetry is episodic in the contrived serial of the state hunting for “foreigners”, is conjectural. Clear signs of a movement that has caught the imagination of people belonging to the community living across the country, are quite visible. The journalist who filed the FIR said, “There is nothing called a Miyah community in Assam”.  Some communities emerge out of a troubled genealogy of prejudice, discrimination and persecution.  Miyah poets are aware they carry a conflicted identity. Any literary movement, apart from finding a community, is also marked by time. The Beat movement in America that started during the late ‘40s lasted for fifteen years and gained popularity only in the last six years. The Hungryalist movement lasted roughly a decade. The survival of Miyah poetry depends on how long this labouring class of refugees will face historical and political brutality.

In his 1964 essay, ‘What Are Poets For?’, the German thinker Martin Heidegger raised the question taking from Friedrich Hölderlin, of the task of the poet “in a destitute time”.  The poet, according to Heidegger, is most acutely aware of the “abyss” faced by modern human beings, where they lack ground. Using the narrative of philosophical theology, Heidegger evokes the anxiety of homelessness and return (in language), around the disappearance of the gods. He blames the nature of technology, the birth of modern science and “the total state”. Our concern is strictly political, and involves the disappearance of justice. It is true however, that communities are no longer open to each other, but mirror the totalising state. The paranoia of sharing power and space makes the majority give minorities a hard time. The ‘Miyah community’ lacks enough ground (of political power, of living conditions) to claim their citizenship rights. They summon every language at their disposal to translate their woes. The law of citizenship across borders has created this political abyss between people who are divided more by the accident of history, rather than the contested and fractured grammar of identity. No language is a singular miracle born of pure roots.

Quoting Hölderlin, Heidegger tells us, “where there is danger, there grows / what also saves.” The Miyah poets venture into this danger of poetic language where they risk naming their troubled relationship with the majority community. It is a political risk, but involves a desire that is ethical: to be regarded as legitimate neighbours. This venturing into the heart of one’s destitution, apart from the risk, also holds the only promise of homecoming. It is vividly described by Kazi Neel in his poem, ‘Journey’. The poet has promised  a waiting bird his return, and describes what lies between them:

“I will have to cross a vast sea of anguish
And I will have to traverse a slippery century like an even powerful monster
I have given her my word
I will come with the taste of wet rain in my heart.”

This is a vivid and powerful poem of homecoming. The idea of promise is embedded in the “word” . It is the promise of return. The “morning train” travelling in the reverse direction, is the locomotive of memory. The poetics of return in Miyah poetry is the reminder of home, not in time past or time present but time future. It details the endless hardship that marks destitution and endlessly prevents their  imagined destination.

Hafiz’s open conversation with Mahmud Darwish’s 1964 poem, ‘Identity Card’, triggered off a movement between Miyah poets who shared their wounds on paper. The destitute time we live in is the time of nations, where territories are sacred, not the dispossessed lives of other people. Nations ensure the gods don’t reach us.

Manash Firaq Bhattacharjee is a poet and the author of Looking for the Nation: Towards Another Idea of India, published by Speaking Tiger Books (August 2018). He tweets at @manasharya.