Mayawati's Suspicions of the Media Are Not Completely Unfounded

Mayawati has alleged that the media actively discriminates against her party, calling media organisations Brahmanical. 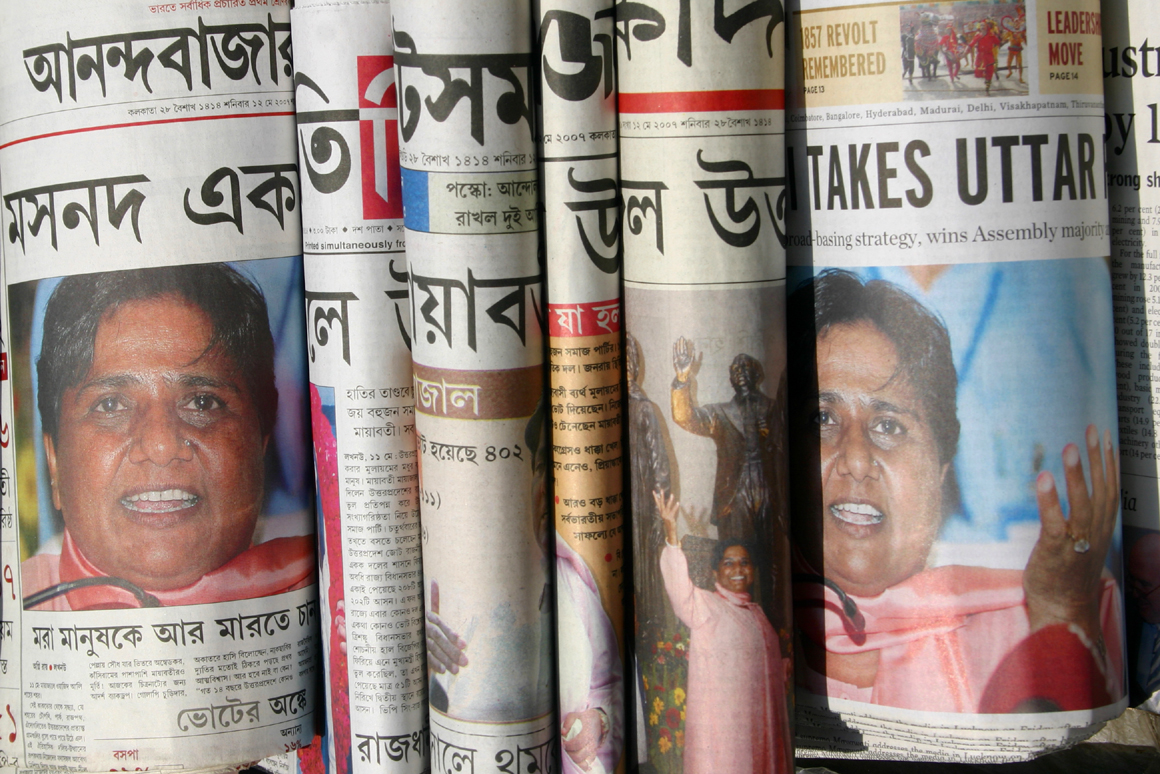 Mayawati has alleged that the media is biased against the BSP and opinion polls are deliberately showing BSP as lagging behind in the UP polls. Credit: Counterclockwise/Flickr CC BY 2.0

Bahujan Samaj Party (BSP) leader Mayawati, the main opposition leader in poll-bound Uttar Pradesh has alleged that ‘the media is being managed’ to influence polls. Addressing a rally in Saharanpur on February 11, she said, “The opposition parties are using opinion polls and paid surveys to influence the voters. These opinion polls suggest a poor BSP performance. In 2007, something similar was done when both the media and opinion polls placed the BSP on third and fourth position but their lies were exposed when the results came out.”

At her rallies, Mayawati has repeatedly accused the media of discriminating against her party and constantly showing its performance in poor light. A survey allegedly conducted in October 2016 had given the BJP a clear majority in UP even before the notification for the polls was issued. Mayawati slammed the survey alleging that the media, controlled by capitalists was showing such skewed survey results to demoralise the BSP workers.

Addressing a meeting of senior party leaders, Mayawati said, “All the newspapers and TV channels are owned by capitalists and multi-millionaires. The agencies conducting the poll surveys are also controlled by them. These capitalists are using the media and survey agencies to create a conducive political environment for parties like the Congress and BJP because they run the government keeping in mind the profits and losses of their corporate allies. In the forthcoming polls, such surveys will be used to demoralise the BSP workers. The voters must beware of them.”

On February 8, Mayawati reiterated the allegation while addressing rallies in Badaun and Shahjahanpur. “The media may undermine the strength of the BSP but the party will form government in UP on its own.”

Mayawati has  repeatedly accused the media, which she labels Manuwadi and Brahmanical, of ignoring the BSP and not giving it proper coverage despite it being a leading party in UP. In the ongoing assembly polls, the scathing attacks have continued.

“Mayawati is right,” says sociologist Badrinarayan. “She has been pushed to the margins. People are talking about her now when she entered the fray. Somebody claimed that the BSP will get 24 out of 50 seats. As a matter of fact, the media does not understand the BSP. Due to this, it only focusses on the political strategies of other parties. If you don’t visit the villages, how can you present the true picture? Opinions formed at tea stalls are different from those formed in cities. A complete picture emerges only when opinions are collected at all levels.”

“Mayawati is right, but it is not done on purpose,” says Abhay Kumar Dubey, member of the Centre for the Study of Developing Society. “As far as CSDS is concerned, its surveys do not intentionally show BSP lagging behind.”

However, JNU professor Vivek Kumar agrees with Mayawati. “Look at the facts,” he says. “All the opinion polls show BSP in a negative light. What she is saying is true. It is well known that her voters are not in cities. How deep inside the villages do the pollsters go? They never say. Even in cities, do they go to slum areas? The survey sample is not representative, which is why the results are skewed. Secondly, a debate around perception is built by showing speeches of several BJP leaders but only Mayawati for BSP. It appears to be a well-thought out strategy of the media.”

Dilip Mandal, a journalist working on Dalit issues, says, “It is true that none of the opinion polls have so far shown Mayawati or Lalu Yadav in the lead. Usually opinion polls and surveys lean towards specific political parties. The rising forces in politics or the subaltern voices are not presented that way. It is possible that the surveys are honest and the voters of these parties are not as vocal. But if it continues this way, it only seems like a pattern. Why is it happening? Those conducting surveys must seriously think about it. In a diverse society like India, if the sampling is not done correctly, a fair survey cannot be conducted. Secondly, there is a pressure on the voter to speak in favour of a particular party, owing to the distrust media faces today.”

“The media has an upper middle class character,” says Badrinarayan. “People in media do not want to work hard. They form opinions based on information easily obtained and run the news. Besides, it is a political game to keep the BSP and Mayawati on the margins.”

What are the powers at work behind this strategy to sideline the BSP? Kumar replies, “Despite being the country’s prime minister, Narendra Modi is seeking votes for the BJP in UP. When he addresses a rally, dozens of channels telecast it. Media discrimination is a fact. Secondly, look at the composition of the media – how many Dalits, backward castes or Muslims work in the field? Baba Saheb [Ambedkar] said that a corrupt administration is open for trade. The media is casteist. The influential lot gives preference to their own caste.”

Whether or not Mayawati and her party are victims of caste discrimination cannot be clearly said. “Mayawati’s support base is not vocal,” says Dubey. “It is possible that poll surveys do not include their opinions completely. As a result, Mayawati’s political strength in UP is often underestimated. But election results show her in the lead. The difference in estimate and reality is based on context and conditions. The better and more scientific a survey is, the closer it is to reality.”

Opinion polls have suffered a massive setback in all previous elections, including the past three general elections. The latest examples are assembly elections of Delhi and Bihar.

Kumar says, “Caste bias is characteristic of the media. Surveys across the world show the vote percent but in India it is broken down seat by seat although it cannot be done merely based on objective and scientific assessment. It happened in all the previous elections.”

“Perhaps, it is characteristic of the media to work against parties like the BSP,” says Mandal. “But more than that I believe that the dominant political powers are capable of capturing the media’s attention. There is no one to challenge it. It is not necessarily a conspiracy. That the BJP remains in the spotlight may not be intentional. Also, the BJP may not even perform as it is predicted. It may all just be general behaviour.”

However, Ashish Mishra, a journalist based in Lucknow, believes that there is truth behind Mayawati’s claims. “She has a point because her party’s media relations are the worst. She maintains a distance from the media. Her party makes no effort to approach the media. No party leader or spokesperson is available to us for comment. No official statements are made. We need content for news. Who will provide it? When we do not have their side of the story we often leave it. In her rallies, there is no information about the organisers, managers and the strategy. Akhilesh Yadav, on the other hand, regularly speaks to us.”

Another senior journalist, on the condition of anonymity, says, “Mayawati’s allegations are wrong. I cover the BSP. But the BSP is different from other parties. Its leaders do not give statements like others. We are only allowed to publish what Mayawati says. If a reporter publishes a story based on information from another source, she calls a press conference the next day, condemns it and declares the reporter ‘Manuwadi’. If the BSP is getting lesser coverage in the media, it is a result of Mayawati’s own strategy. If it is not so, why is no BSP leader ready to give an interview to any newspaper even when leaders from other parties are regularly giving interviews during the ongoing polls? If a BSP leader is approached for comment on any issue, he says ‘Behen ji will respond to it’. But Behen ji is never available to the media.”

The BSP’s strategy of distancing itself from the media has been in place from the very beginning. Speaking to BBC, senior journalist and writer of Mayawati’s biography, Ajay Bose said, “Kanshi Ram [the founder of BSP] used to be in constant touch with the media when he was consolidating the All India Backward and Minority Community Employees Federation (BAMCEF). But once he formed the party he grew distant. Actually, the mainstream media did not portray Kanshi Ram’s politics correctly. So, both were mutually distant. Mayawati continued the tradition.”

Questioning the limits of survey techniques, Dubey says, “Every survey has its limitations because it is dominated by urban, educated and upper caste people. Yet we try to include as many marginalised voices as possible. It is true that the upper caste casts a lot of influence in the media but it does not mean they negatively portray Mayawati intentionally in the surveys because nobody wants to be blamed. If the BSP performs well in the results, and the surveys are proved wrong, we will need to reexamine our survey techniques.”

Several journalists in UP believe that Mayawati does not need the media. Her voters are mostly illiterate and do not get influenced by the media. The statements against the media she makes in her rallies are to urge her voters not to trust the news or the propaganda against her. Nevertheless, the question remains – is the media untouched by such allegations of casteism, discrimination, strategising electoral coverage and party bias?

Mayawati has now changed her tone with the journalists and responds to their questions, something she never did in her press conferences earlier. Once attributed to the BSP, the socially engineered slogan ’tilak, tarazu, aur talwar; inko maaro joote chaar‘ (Thrash Brahmin, Baniya and Thakur with shoes) has now been given up. Even the media is no longer as Manuwadi for her. In the ongoing elections, her media contact has definitely seen a historic rise. But journalists still eagerly await a call for Mayawati’s interview.

This article was originally published on The Wire Hindi.