The protests at Marina beach over Jallikattu is more of an expression of Tamil solidarity rather than being about any particular grievance.

One of the many meetings at the protest. Credit: Nilkantan R.S.

Chennai’s Marina beach has a long and storied place in Tamil politics. Subramania Bharati and M.K. Gandhi have addressed political meetings here. The ongoing protest for Jallikattu, though lacking the big names, compares quite favorably with the many historic events of political theatre that this urban beach has witnessed.

Almost everyone there is under 30. A very large number of the protestors are women. It’s peaceful. More than it being a protest, the atmosphere is one of a carnival. There are marches, sloganeering, dancing, music and camaraderie. Women who came from out of town mentioned how it seemed safe for women – a feat of some order in a modern Indian city.

Some 10 feet above ground, atop the Thiruvalluvar statue, a woman clad in a black saree was perched. How she climbed up there dressed in a saree, I don’t know. The calm, determined look on her face and the politically charged signs she was displaying made almost everyone stop and take note. Thiruvalluvar, the man towering over her, would have been proud. 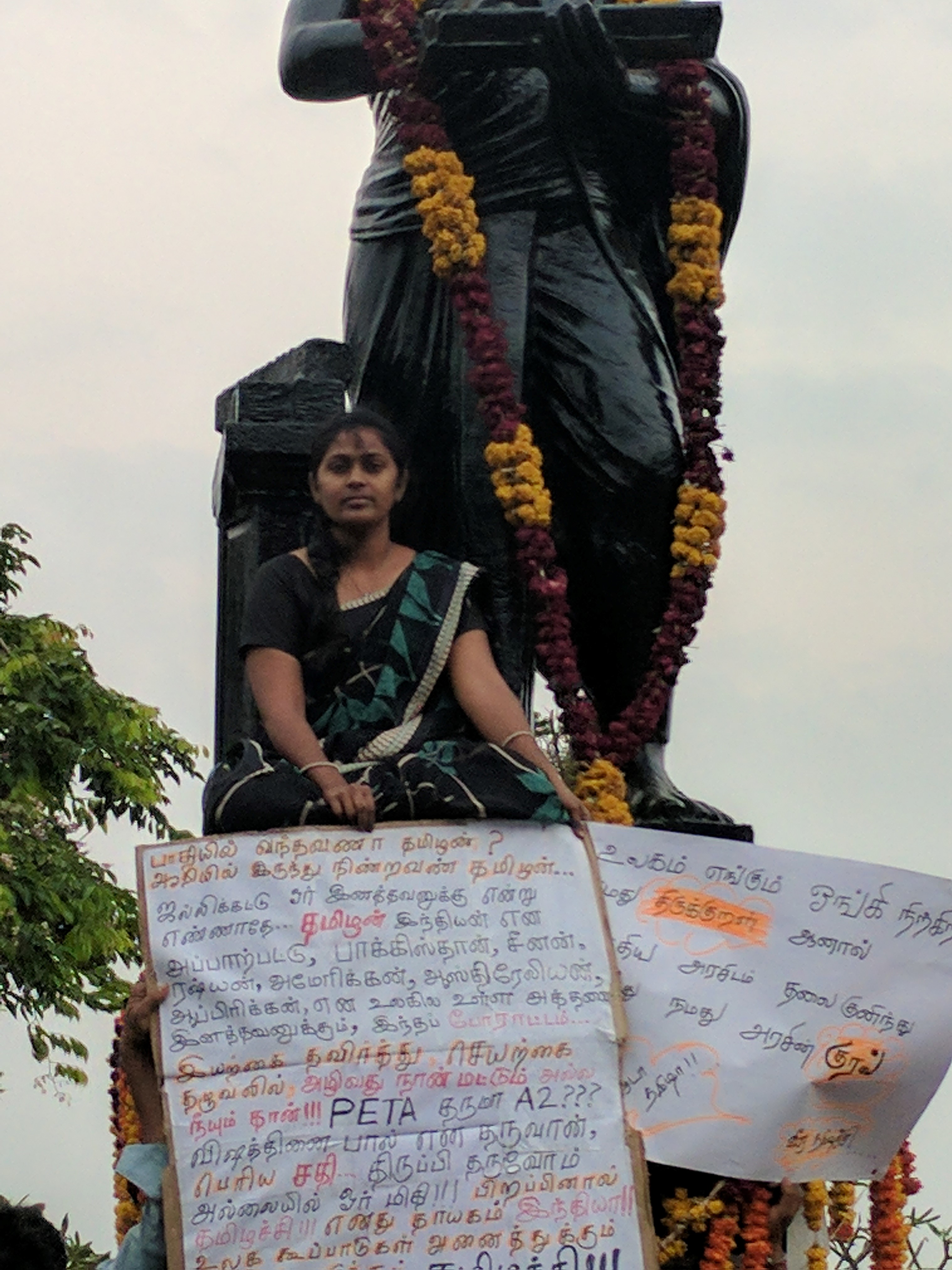 The woman in the black saree sitting on the statue. Credit: Nilkantan R.S.

A young, mild mannered and shy student named Owais was cleaning the trash other protestors were leaving behind. The trash mixed with grime and it looked quite ugly. I offered help. Then I realised what a daunting a task it was and moved along. But he was determined. He had no gloves but went about with just his hands and a gunny bag. His sense of civic duty will put most of us to shame.

The other noticeable aspect about the protest was the significant number of Muslims. While the Hindutva brigade has been trying to portray Jallikattu as a Hindu issue on social media, these young Muslims reminded everyone that this was a Tamil issue.

There were stretches where protestors were overflowing onto Beach Road and made movement difficult. Young volunteers, most of them no more than 20 years old, formed a human chain to separate the protest area from moving traffic. An ambulance came and volunteers working with the police somehow managed to get it through by getting a sea of people to part. The police, to their credit, were immensely helpful to both the protestors and the public at large.

The role of the police in these protests is an overlooked and under appreciated aspect. Protests world over succeed when the security apparatus of the state is either on the side of the protestors or at least decides to not unleash violence on their own citizenry. Extreme cases of this include successes like Tahrir Square or even the French Revolution. Syria is an example of what happens when the state decides to shoot down protestors. Tamil Nadu is not any of those extreme cases but that the police often took selfies with protestors and were generally enjoying the carnival atmosphere themselves is a useful point to bear in mind. Most police personnel on duty, it appeared, were generally supportive of the cause.

The protest was not one giant rally like politicians organise at election campaigns. There were multiple small gatherings. Many students with microphones made many small speeches. Some were blurting out clever, funny and unprintable slogans jeering at both Prime Minister Narendra Modi and chief minister O. Paneerselvam. Some others jeered at Subramaniam Swamy whose incendiary tweets were met with abuses that would make most people blush. Some wanted a ban on PETA. Some others were discussing the effects of losing native cattle breeds, which they claimed is what banning Jallikattu will result in. This wasn’t all – a call to boycott of Pepsi/Coke came alongside an appeal for students to stay united. But an essential factor in all these various sub-protests was an appeal to Tamil identity. Almost all protests were implicitly an expression of Tamil anxiety.

Most protestors were college students from the city of Chennai. It’s a reasonable estimate that a vast majority of them came from homes that did not own cattle. Most of them are likely to have never touched a bull in their lives. Yet they were at the Marina beach protesting for Jallikkattu in what is the largest protest the state has seen in decades. This is something that needs far greater sociological exploration. One could attribute this to the power of social media intersecting with a cause that moves people. But surely demonetisation had a far greater impact on these protestors than a ban on Jallikattu did? Demonetisation saw no such mass protests.

The Tamil aren’t blind to the downsides of Jallikattu either, one would assume. It’s obvious for anyone to see that the moral case for making a bull run through a bunch of men for anthropocentric reasons needs to be made with a few leaps of faith. PETA (People for Ethical Treatment of Animals) and its activists, to be sure, overstate the case of torture in some regard and much of that can be overcome with stricter oversight. A bunch of city slickers protesting for the rights of others to cause even the slightest harm to an animal for entertainment/sport makes their argument tenuous. After all, these college students did not protest for farmer suicides and drought crippling the rural masses in Tamil country. Protesting exclusively for the cattle owned by same people doesn’t compute unless all of these individual strands are seen as part of one larger problem. Jallikattu is the straw that broke the camel’s back.

An aspect that’s affected the Tamil psyche in recent times is the empty space left by two giants of the political landscape. J. Jayalalithaa passed away recently while M. Karunanidhi has been ill and has for all practical purposes retired. There was, one could argue, a sense that Tamil interests had strong and powerful leaders in these two giants. Jayalalithaa’s AIADMK was after all the only party to argue against the GST citing states’ rights. While Karunanidhi’s credentials in this regard have been burnished for over half a century, their exit from the public sphere in such a short period of time has, as a matter of practical power play politics, left Tamil Nadu without a champion in the heavyweight category. The impact of this vacuum on the Tamil psyche to assert one’s identity is one possible explanation for the collection of straws.

The alienation of Tamil identity from the national mainstream has also been hastened by the incumbent government at the Centre. The Sanskrit and Hindi bias of the BJP needlessly reopens wounds. To a Tamil, India is much like what the UK is to Scotland. The project is useful as an area that affords free travel and access to markets. But beyond that, to a Tamil it makes no difference. For instance, it makes no difference to a Tamil if Pakistan is part of that project. His or her unit of political discourse is the immediate cultural unit of Tamil society. And historically that has been true for 2,500 years. An Indian nation state that’s 70 years old is unlikely to change that.

In this context, it’s useful to see the carnival at Marina beach as more of an expression of Tamil solidarity rather than being about any particular grievance. This solidarity and sub-nationalism worked for Tamil Nadu in the past 70 years. The state has used that to improve its health and education indices more than any other state in independent India. The index of sub-nationalism that helps in fomenting a sense of ‘my state’ for development is the same that builds fissiparous intent vis-a-vis the nation state. How India deals with its individual states which are also linguistic and civilisational entities will govern how the protest at Marina pans out in future.