Lenin in Urdu: His Every Word Became Poetry

Iqbal’s trilogy of poems in his collection Baal-e-Gibreel (Gabriel’s Wing) is the clearest indication of his admiration of Lenin and the Bolshevik experiment.

The figure of Vladimir Lenin – born 150 years ago today – exercises a talismanic hold on revolutionaries everywhere, across time and space. While Lenin’s signal achievement – the Bolshevik Revolution, whose centennial was celebrated in 2017 – is richly represented in Urdu literature, writings on Lenin himself, whether poems or fiction, are few and far between. Thus, on the occasion of Lenin’s 150th birth anniversary today, it would be both useful and instructive to survey, by no means exhaustively, Urdu writings on Lenin.

Perhaps the most celebrated poem on the founder of the Russian revolutionary state was Allama Muhammad Iqbal’s ‘Lenin, Khuda ke Huzoor Mein’ (Lenin in God’s Presence) written soon after the revolution took place in Russia, in the form of an imagined dialogue, comparable to Russian poet Vladimir Mayakovsky’s ‘Conversation with Comrade Lenin’ (1929).

Iqbal was among the first Urdu writers to be influenced by the world’s first socialist revolution. Already 40 when the Bolsheviks seized control of Moscow, Iqbal’s trilogy of poems in his collection Baal-e-Gibreel (Gabriel’s Wing) is the clearest indication of his admiration of Lenin and the Bolshevik experiment. ‘Lenin, Khuda ke Huzoor Mein’ is the first of this trilogy, where Lenin complains to God about injustice. This poem includes a line which has now achieved the status of an aphorism:

The second poem ‘Farishton ka Geet’ (Song of the Angels) is a highly rhythmic recitation by angels of what they have witnessed on earth, corroborating Lenin’s complaints.

While Lenin holds his ground, accusing God of being ineffectual, God is not at all upset with Lenin’s impertinence. Instead, in the third poem, ‘Farmaan-e-Khuda Farishton Se’ (God’s Command to the Angels), He calls upon his angels to effect a few changes in the organisation of the world at large. Wouldn’t you like to be a fly on the wall during that exchange? Thanks to Iqbal, you are.

Roil the blood of slaves with the pain of belief
Sparrows should challenge eagles, make no mistake

Distance between God and humans is futile
Remove the bishops from the church; they are fake

Build me a simple house with sand, for I hate
Those marble edifices.

The new world is but a brittle glass palace
Poet of the East, learn obsession and heartache.

This poem was memorised by an entire generation of South Asian leftists coming of age in the 1950s.

Following Iqbal, his great contemporary Maulana Hasrat Mohani, the Islamic socialist, who was also one of the founders of the Communist Party of India, wondered aloud:

Why waste time with Gandhi’s spinning wheel,
And not usher a revolution with Lenin’s zeal?

By the time of the formation of the Progressive Writers Association in 1936, events in the Soviet Union itself had divided the communist movement following the death of Lenin in 1924, due to the consolidation of Stalin’s power, and the subsequent expulsion of Trotsky from the Soviet Union. In India itself, the Communist Party split into the CPI and CPI-M (Marxist) in the 1960s. However, among the poets, Lenin still remained a revered figure. One powerful example of such uncritical devotion is ‘Lenin’, part of Ali Sardar Jafri’s 1949 collection Khoon ki Lakeer (The Bloodline). It is definitely not one of Jafri’s best poems, especially when he refers to Lenin as the keeper of a ‘Red’ tavern:

He who fulfilled every country and nation
That tavern-keeper of the red tavern, Lenin

Elsewhere, reminiscing about the dreams of youth, Jafri in the poem ‘Mere Khvaab’ (My Dreams) narrates reading Lenin as part of a workers’ assembly,

Niaz Haider, a highly-regarded communist poet published a collection of poems to mark the 50th anniversary of the Bolshevik Revolution in 1967, titled Naveed-e-Asar Lenin (Lenin, the Glad Tidings of the Age). In one of the poems, ‘Bahuzoor-e-Lenin’ (In the Presence of Lenin) dated April 1958, the poet betrays the rather unfortunate tendency to make Lenin into a Byzantine saint:

It is in Kaifi Azmi’s paean to Lenin that one sees a different kind of veneration: one that acknowledges the flaws in Lenin’s legacy, but still seeks his counsel. Kaifi’s poem, part of his most tortured work Aavara Sajde (Vagabond Obeisances) published in 1974, invokes Lenin to address the splits in the worldwide communist movement, including India,

In the very next paragraph, he requests Lenin to write another holy scripture to solve the issues of the period,

The period difficult, the problems over and above it at this juncture
Resolve them, pray do write some scripture

The poem is replete with nostalgia for a time when Lenin, as the colossus of the world communist movement, kept it united.

Faiz Ahmed Faiz, the doyen of Pakistani progressives, surprisingly has no separate poem on Lenin, though he does have a poem in his Kulliyaat (Collected Works) commemorating the martyrs of the Battle of Leningrad. Faiz’s lyrical pro-peace speech, which he made in Urdu while accepting his Lenin Peace Prize in 1962, only refers to the grand old man in a couple of lines: ‘The greatness of the Lenin Peace Prize indeed is evident from this single matter that the respected and sacred name of Lenin is associated with it. Lenin … is the most venerable standard-bearer of human freedom in the present time.’ One is not sure whether Faiz, unlike Kaifi and Sahir later on, was oblivious of the chinks in the Soviet system, or was merely being deferential to his generous hosts. 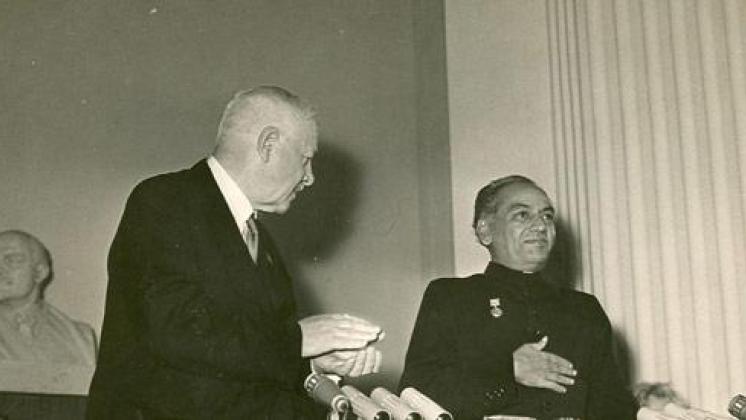 Sahir Ludhianvi devoted two poems to Lenin, one of which is a standard ode to the latter as the leader of the victorious revolution of 1917. The second poem, written on the occasion of Lenin’s birth centenary on April 24, 1970, fifty years ago, opens with the uncertainty which many in the communist world were also confronting regarding the division and disunity in the communist camp,

Where will your community go, how are we to know
The number of leaders continues to grow

Sahir refers obliquely to the events in Moscow following the death of Stalin and the split in the communist movement, before which present enemies and ‘revisionists’ were once comrades. In closing, Sahir raises the apprehension that sects rather than class maybe the basis of a new division,

He gave imagination to the writers
His every word became poetry

While Urdu poetry is rich in references to Lenin, for the purposes of this brief review essay, I have not been able to find many concrete references in Urdu fiction. However, Pakistan’s greatest living fiction writer, Mustansar Hussain Tarar, who first visited Moscow as an 18-year-old Pakistani delegate to the 6th World Festival of Youth, mentions visiting Lenin’s mausoleum in his novella recounting that trip, Fakhta (The Dove):

“And Lenin … dressed in his traditional dress coat, waistcoat and broad tie, this same thick and ugly knot which has emerged in a distinct manner in millions of pictures and sculptures till now. Wide brow and hair set in order … Lenin whose socialist system comprises more than half the world today; Lenin who deemed the workers and peasants the true claimants of the throne for the first time in history.” 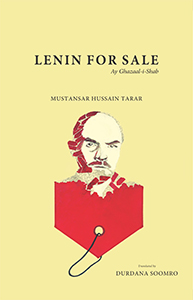 More than half a century later, Tarar recreated the crumbling of that world and its impact on a generation of Pakistanis who had made Moscow their home, either physically, or of their dreams for social justice and emancipation, in his novel Ae Ghazaal-e-Shab, which has been recently translated into English as ‘Lenin for Sale’. This sale refers to the ideological selling out of his ideas in the new Russia, where apparatchiks turned into businessmen whom no one could touch; it also refers to physical selling, as the main character of the novel finds that there is no market for the Lenin statues discarded by the new political dispensation, and is instead forced to turn them into crosses. Here is how Tarar mercilessly describes one such Lenin crossing over from Russia into the United States:

“Following its immediate sale, many Lenins came and went—American tourists were dead keen on them, and paid the asking price in dollars. They were packed in huge crates and shipped back home. Comrade Lenin, whose system had not been able to approach those shores in his lifetime, was now, after his death, entering the country of the yellow devil without any passport or visa … A Texan millionaire had placed him outside his front door with a placard on his chest: ‘Dogs and communists not allowed! By order of Vladimir Lenin.’ … He was now a frivolous decoration piece in the system he had struggled to destroy, and in this sophisticated capitalistic world he had been unable to fix the knot of his tie—it was still loose and slovenly.”

Tarar’s treatment of the effects of the collapse of the Marxist-Leninist regime in Moscow is hitherto the only one I have come across in Urdu literature and deserves to be treated in greater detail than is possible in this brief review.

It is pertinent to end this piece with a parody of Mirza Ghalib by the humorous Delhi poet Nazar Barni, ‘Zuban Kyun Ho?’ (Why This Language?), wherein Lenin makes a cameo:

Lenin had settled America, he is wont to say
When my teacher is ignorant, why should I bother sitting for my exam

The couplet is not only a comment on the notoriously uncritical guru–shagird relationship in South Asia, but also on those dogmatic Leninists for whom Lenin seems to be everywhere, even out-Columbusing Columbus.

Note: This is the first in a series of articles and reviews commemorating Lenin’s 150th birth anniversary.

All translations from the Urdu are by the writer, unless otherwise stated.

Raza Naeem is a Pakistani social scientist, book critic and award-winning translator and dramatic reader currently based in Lahore, where he is also the president of the Progressive Writers Association. He can be reached at: razanaeem@hotmail.com.