A new report from the International Federation of Journalists has talked about the continuing challenges faced by journalists living and working in the Valley. 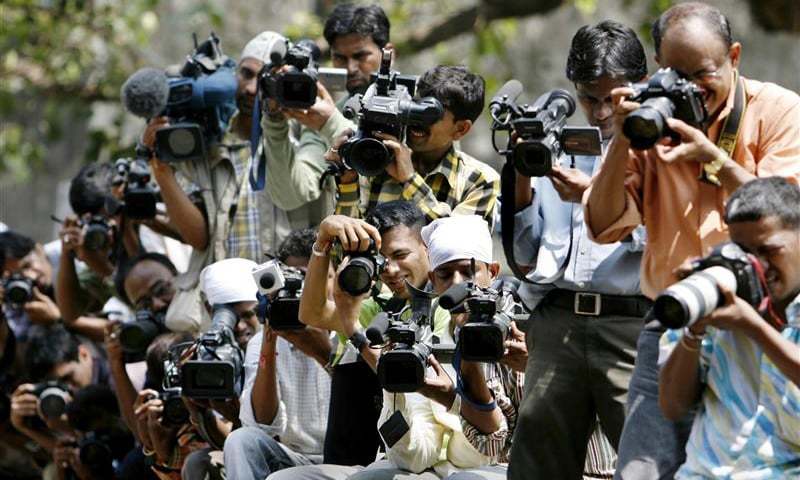 The media in Jammu and Kashmir has “walked the razor’s edge for the past 30 years, facing pressures from all sides of the conflict”, the report says. Credit: Reuters

New Delhi: The spike in unrest in Kashmir following a “fake encounter” in 2010 in which three civilians were reported to have been killed by the army and the public protests in 2016 following the killing of militant leader Burhan Wani by security forces has brought with it “special challenges” for the media in the state, a report by the International Federation of Journalists has said.

The report titled ‘Kashmir’s Media in Peril: A Situation Report’, authored by Laxmi Murthy, has noted that in Kashmir, which along with the Maldives was identified as a zone in South Asia in “need of urgent intervention to protect press freedom and journalists’ rights” by the South Asia Media Solidarity Network (SAMSN) at its meeting in Kathmandu in September this year, internet shutdowns and censorship in recent times have also restricted information flow and the right of journalists to report.

Based on meetings with journalists, young reporters, press photographers, editors and media house owners in Kashmir and put together with references to media reports and other data, the report has highlighted the challenges faced by the fraternity.

Recalling how the media in Jammu and Kashmir has “walked the razor’s edge for the past 30 years, facing pressures from all sides of the conflict”, the report said while since the 1990s Kashmir has been in the throes of an armed insurgency, intense militarisation and arbitrary use of draconian laws, “journalists have had to survive by treading a tricky middle path, carrying out balanced reporting in a conflict situation in which they and their families live”.

Along the way, it said the “media has suffered in the form of killings, direct attacks, intimidation, threats and pressures from various quarters. Twenty-one journalists have been killed due to the conflict – either directly targeted or caught in the cross-fire.”

Referring to a number of recent cases – Shafat Siddiqui, a photojournalist who drowned in the 2014 floods; Mir Javed and Zuhaib Maqbool, who were blinded by pellets in 2016; the arbitrary banning of the Kashmir Reader for three months in October 2016; and the detention of Kamran Yousuf without charge by the National Investigation Agency in September 2017 – the report has noted how journalists have braved difficult circumstances over the last three decades of unrest in the state.

“Before militancy took hold in Kashmir, the media was an extension of the state,” the report quoted editor and owner of Kashmir Life weekly Masood Azhar as saying, adding that it was during the 1990s that independent media in Kashmir emerged as a force to reckon with. “In the face of great hardship, it has continued to show resilience,” it added.

The report said there are 61 registered Urdu newspapers and about 34 registered English newspapers. “These newspapers took on the challenging task of reporting the militancy and its impact on common Kashmiris, the might of the Indian state and human rights violations committed by the security forces and also by the armed militants.”

Despite pressures from the government, military and the militants, the media has been able to hold its own. As Masoon Hussain, editor of Kashmir Life, put it: “Kashmiri media has been accused of bias, but there is not a single incident in the past 30 years that has been suppressed by the media. Besides trying to sustain itself as a viable institution, the media has tried to uphold the idea of democracy.”

But while 370 publications are listed with the Department of Information and Communications of the government of Jammu and Kashmir, most of the credible newspapers are struggling to survive. Hussain said in the given circumstances, while “there is no question of a structure like the Wage Board to regulate salaries”, health insurance for the employees looks a more distinct possibility. The report has also noted how for most journalists in Kashmir there are “no appointment letters, no medical benefits, insurance or pensions or provident fund. Written contracts are not drawn up and jobs and work assignments go according to oral agreements which are not binding.”

Under attack from all sides

Considering the perilous conditions they have been working in since 1990s, 21 journalists have lost their lives in targeted killings or because of being caught in the cross-fire, the report says. Worse, they have been targeted by all sides of the conflict – militants, the military and state-sponsored renegades (‘surrendered militants’ or Ikhwanis).

As senior journalist Yusuf Jameel, who was with the BBC in 1990s, recalled, there was a grenade attack in his office in 1990 by the Jammu Kashmir Liberation Front (JKLF) on the allegation that he was not giving enough coverage to them. “Ironically, the next grenade attack was by the Jamiat-ul-Mujahedin on grounds that I was giving too much coverage to the JKLF!” he said, adding that he was also abducted and detained by the army on several occasions.

Today, the report said, while targeted killings are not the norm, journalists continue to be vulnerable while covering the conflict. “One journalist narrated how he was recently beaten by the Special Task Force (STF) of the J&K police and had to be hospitalised for two months,” the report said, adding that he rued that “far from any support from my organisation, my editor did not even phone me”.

Lack of support from employers

The report said the recent arrest of photojournalist Yousuf, 20, who was picked up on September 5, 2017 by the National Investigation Authority (NIA), was a case in point of how employers often look away when their staff members are held on serious charges. “He is reportedly languishing in Tihar Jail in Delhi, with no charges framed against him. The 20-year-old from Pulwama had been contributing to Greater Kashmir, Kashmir Uzma and other publications, but has been disowned by them. A news item about an earlier assault where he was identified as “GK lensman” was taken down from the Greater Kashmir website after his arrest by the NIA,” the IFJ report said.

Online abuse and intimidation are growing

Journalists in Kashmir also complained about increasingly being trolled, threatened and abused online. Asif Qureshi of ABP TV channel told IFJ, “I have had to deactivate my Facebook account due to the barrage of abuse within minutes of posting any story.” He recounted how WhatsApp messages from all over the world ranged from a “friendly nudge” to give a certain angle, to open threats.

The vulnerability of Kashmiri journalists who live in the Valley is much higher than “parachute” journalists from Delhi or international channels who visit for a few days and leave, with no stakes in life in the Valley, the report added.

The report noted that “news-gathering and verification are fraught with challenges in Kashmir”. From obstacles to physical access to villages on the contentious LoC with Pakistan to routine denial of information from official sources, getting the complete story and a quote from all sides is virtually impossible, it added.

Citing the floods in Srinagar in 2014, it said a journalist quoted in a study by the Reuters Institute had charged: “The majority of the media outlets from New Delhi were operating from the military airbase in Srinagar. They were embedded and did not shy away from openly running a public relations operation for the military.”

On the other hand, the local media and international publications presented a very different picture of the disaster and its aftermath, the report added.

“With names like Butt or Geelani, we are not issued passes,” the report quoted a local journalist as saying, adding that even journalists are not allowed to move when the military restricts movement and disallows residents from coming out of their houses.

Also, often the official version comes “too late”, making it impossible for journalists to include quotes of relevant government and military sources within the schedule demanded by a daily news cycle, it said.

The army, the report said citing journalists, also controls the flow of information and testimonies from affected populations by intimidating villagers to the extent that common people are afraid to talk to journalists due to fear of repercussions. As Shahana Butt, who reports for an Iranian TV channel, said, “I could hardly talk to victims of pellet injuries during last year’s uprising as they were scared to let me into their homes, lest the army or police harass them after I had left.”

With most papers in Kashmir nominally priced, they do not earn sufficient revenue through sales or subscriptions. Stating that “these papers survive on government advertisements and paid public notices,” the report said “this source of revenue comes at a price of course. The Central Government Department of Audio Visual Publicity (DAVP), disburses advertisements, but with strings attached …. Some publications receive advertisements disproportionate to their circulation …. The content of these publications is obviously impacted by the dependent relationship between the newspaper industry and the establishment, especially for economic survival.”

Pro-government publications are favoured with government houses, land and other ‘privileges’ for propagating the official line. Those who do not play the game, pay a price, the report said. “Some newspapers have been blacklisted for several years for their critical stands,” said Shujaat Bukhari, editor of Rising Kashmir.

The report quoted a recent October 18, 2017 letter from the home ministry to senior officials of the state government and the Jammu and Kashmir police as saying: “It is understood that some newspapers in J&K are publishing highly radicalised content ….. publishing of anti-national articles in the newspapers of the state should be strictly dealt with. Such newspapers should also not be given any patronage by way of advertisements by the state government.” It added that at a meeting with the director of information, editors were told, “If you take government advertisements, we also expect something.”

Note: In an earlier version of this article, the Jamiat-ul-Mujahideen was wrongly described as the Jamaat-e-Islami