Interview: 'Assamese Literature Should Evolve To Meet the Challenges of Changing Times'

New Delhi: Founded in 1917, Asam Sahitya Sabha is the highest non-governmental Assamese linguistic and cultural body. For over a hundred years, the Sabha has been the fulcrum of efforts to promote Assamese culture, language and literature. Literary luminaries of Assamese language have been the body’s presidents, who would then typically chair the annual literary festival that was held at a new destination in the state every year. Lakhs of people congregate at these annual gatherings held for four days in a row – interspersed with literary sessions, book fairs and cultural shows among others. For decades, these annual sessions of the Sabha have been a major driver of Assamese book sales, finding new literary talent, a platform for readers and authors to interact, and importantly, instil the habit of reading books among young ones.

The 2020 session of the Sabha, held between January 31 and February 4, was chaired by the Assamese writer Kuladhar Saikia, who took over as its new president for a two-year term. Saikia, a Sahitya Akademi winning short-story writer and novelist, had retired as the director general of Assam Police in August 2019.

In an e-mail interview with The Wire from Guwahati, Saikia, an alumnus of the Delhi School of Economics, speaks about his plans for the advancement of Assamese culture and literature during his term, which would complete a year this January.

Every Sabha president brings in their vision for the promotion of Assamese language and literature. What is yours?

The task before this century-old literary organisation, which can be called the guardian of Assamese language and literature, is manifold. The Sahitya Sabha has to ensure that the Assamese language feels secured in the midst of continuous challenges posed by other languages with more number of speakers. The language has to continue fulfilling its role as a common lingua franca connecting, emotionally and otherwise, multiple communities with each other not just across Assam but in a large part of the Northeast. There is the bridge of age-old friendship between the diverse ethnic groups and the Sabha needs to be strengthened so that a collaborative ecosystem helps in mutual growth of literature and languages amongst all these groups, even though numerically some of the groups have a thin presence in the wide literature world.

Aside from this, with changing times, the Sabha has to also keep pace with the application of technology as ‘electronic literature’ has ushered in unlimited possibilities and opportunities, making literature more democratic. Moreover, the spread of Assamese diaspora all over the globe, their zeal to be in connection with their roots through the language, culture and literature, needs special facilitation by the Sabha.

All these factors have added additional dimensions to the overall vision of the Sabha, apart from playing its traditional role to take the Assamese literature and language forward and inspiring the new authors to do more creative work and develop new readership.

As you just mentioned, the Sabha is already using the Internet quite a bit. A lot of meetings of the Sabha’s district chapters have also gone online for the first time, prompted by COVID-19 restrictions too. Here, I particularly want to ask you about the Sabha’s ambitious digitisation process that has taken wing during your tenure.

Digital technology certainly contributes to the growth of wider readership, breaking of geographical boundaries and taking literature to every region. If no effort is made to digitise valuable resources in Assamese language, culture and literature, it will amount to remaining a frog in a well. Incidentally, in the presidential speech in the last open session of the Asam Sahitya Sabha held at Sualkuchi in lower Assam, which was attended by several lakhs of people, I spoke about the need to use modern technology to create a digital archive of our literature, which received wide support. 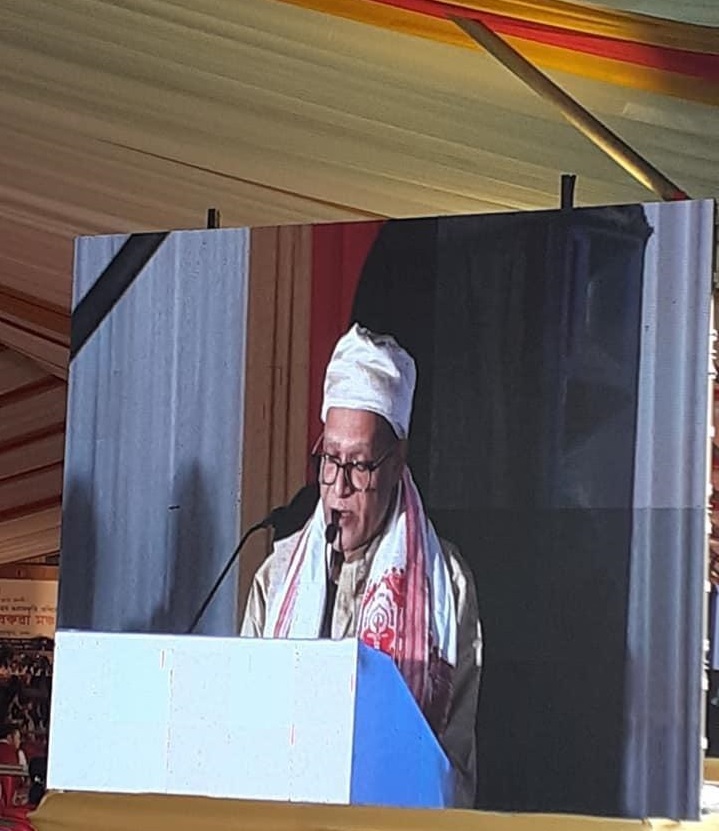 Accordingly, the digital project of the Sabha where literary work from the 15th century onwards is going to be digitised on priority. It is in collaboration with the state government-owned company AMTRON and we are in touch with different academic institutions, including IIT, Guwahati and various other universities.

Talking about COVID-19, the lockdown also necessitated the switch to internet technology. Though there were initial hiccups, nearly a thousand branches of the Sabha all over the state are equipped to host virtual programmes on Assamese literature and culture. It will continue in different forms and platforms after the pandemic.

As we all know, digital preservation of books has opened new avenues to make world literature easily available to readers across the world aside from preserving them. It does not mean that this step will throw a spanner in our traditional urge to read and enjoy printed books. On the contrary, these two systems will complement each other and bring new opportunities to read books and conduct research.

To increase the habit of reading, we are opening different sale and reading counters all over Assam.

Also, a number of new generation writers have taken to social media platform and publishing in online magazines. In the process, they have expressed their identity with new literary trends, have established a relationship with readers across the globe. The Sahitya Sabha is taking steps to keep pace with time, to ensure the development and expansion of language and literature through the use of technology, also making an all-out effort for an independent slot for the Assamese script in Unicode. We can definitely innovate certain essential tools for our language, like a spell-checker, online dictionary, grammar checker and auto-translator to make digital writing in Assamese seamless. The Sabha will take these steps.

Assam now has a sizeable population living outside of the state and the country. Aside from catering to Assamese speakers living within Assam, we have recently seen the Sabha reaching out to the other two categories of Assamese literary practitioners and language users. If you can elaborate here some of the interventions you have made in this regard?

Already, there are some overseas branches of the Sabha, say in select countries like the US, the UK and Canada. But with the growth of Assamese speaking diaspora and language practitioners from the northeastern region all over outside the country, it is important that special attention is given to them to make them feel connected to their roots. The second generation children of those families should be given a chance to taste the flavour of their mother tongue through informal teachings.

We have hosted several webinars in this regard. In those platforms, I have interacted with more than 80 Assamese families living in different countries; was impressed by their collaborative zeal for development of Assamese language tools and curriculum across countries.

In a similar move, we have online interactions with Assamese people residing in different states within the country where they were given opportunities to express their opinions on having a respectable social platform to enable them to connect with people back home, particularly at the time of the pandemic.

All these steps resulted in binding the people with a thread of renewed pride about their mother tongue, because of which we saw a sudden spurt in virtual Assamese language teaching schools abroad and within the country. We have started a series of online programmes on storytelling, poetry recitation, cultural shows by the diaspora. You can call it a new wave of resurgence in creating a global village of people of Assamese ethnicity to be in touch with each other. They are now taking up smaller online projects to enrich Assamese literature.

I strongly feel that the new generation of Assam can play a vital role in making the century-old organisation’s bid to meet the challenges of the changing times; it will not be wrong to expect that a lot of young people with experience, within the country and abroad, are waiting to become companions in this journey.

Additionally, a few more issues too are involved – for instance, given the all-pervading role of social media, the Sabha should also have a powerful and efficient presence in it. It is heartwarming to note that in our mission to make storytelling popular as a tool for imparting knowledge, values and customs of Assamese society, we are widely using the traditional and modern methods. The new generation has been the prime movers of this endeavour.

Any particular attempt being made to translate fiction/non-fiction work written in Assam’s tribal languages to Assamese, and vice versa? Also, very few Assamese novels written by the luminaries have been translated to other Indian or international languages. Will  you give any thoughts to this during your term?

Important episodes of Assam’s history, social values and the evolution of Assamese people, the uniqueness of different communities that reside in Assam, their contribution to shaping the Assamese identity – such issues need to be told not only in Assamese, but also in various tribal languages of the state and the Northeast, other Indian languages and in English so that people across the country get a window to understand it. These also should find a place in textbooks.

In the Sabha’s translation project, special attention is being given to literary exchanges through the translation of books from Assamese to other Indian languages and vice versa. Similarly, to the literature of other ethnic groups in the Northeast region too. In several storytelling programmes that the Sabha has recently started, we have included tales from tribal cultures so that the younger generation is exposed to the diverse culture of the Northeast and celebrate being a part of it. Talks have already progressed substantially to include works from languages like Bodo and Manipuri, also Malayalam, Konkani and Marathi into this programme.

Also, translations of writings by Assamese literary legends like Lakshminath Bezbaruah are going to print, aside from the work of new generation authors into other languages. The books of famous authors of Assam are definitely on our agenda for translation. Importance is given to the selection of books of critical essays on the formation of Assamese language and script in our translation ventures. Poetry from select areas of the world is being translated into Assamese and vice versa.

An attempt is on to also publish books in English as a short introduction to present the state’s glorious literary hive to readers outside the state. This will help promote Assamese literature outside the state and widen its understanding in different languages.

Finally, you are also a Sahitya Akademi winning Assamese author. What are you writing these days?

I don’t make a well thought out plan when it comes to writing. During the lockdown, I did a good amount of reading and also wrote a few short stories. Maybe I will have another short story collection soon.

The responsibilities at the Sabha keep me tied up. I do think about writing a novel which will zig-zag through lanes with bits of experiences from my life in the policing job thrown in, and of course tidbits from beyond the uniform too!