The need of the hour is for journalists to stay united, to display a sense of fraternity.

If ever there was a worst year for press freedom in India, 2017 would be it. The Committee to Protect Journalists (CPJ), a not-for-profit global press freedom organisation headquartered in New York, recorded over 20 instances of journalists being threatened, sacked, physically attacked, censored and killed in the line of duty, by violent mobs, police, paramilitary forces simply because they were doing their jobs.

Additionally, powerful corporates slapped criminal defamation cases against media organisations, who exposed conflicts of interest and potential wrongdoings. The Wire has been at the receiving end of two of those legal cases – one of them filed by Rajeev Chandrashekhar, a member of parliament and, ironically, the owner of Republic TV, a news channel. A striking feature of the threats this year has been the wide range of their sources and the brazenness with which they’ve been carried out. In September this year, journalists received messages on WhatsApp that threatened to “finish off” anyone who wrote against the Bharatiya Janata Party (BJP) and added that Gauri Lankesh was killed because she was “anti-Hindu”.

Earlier, in February 2017, CPJ had reported how journalists, who were covering a fight between student groups at Ramjas College in Delhi, were beaten up by the police. When one of them protested that they were simply doing their jobs, an officer told them that they should be beaten up even more. A similar incident occurred in Kolkata in May, when police beat up journalists covering a protest march in the city. These incidents illustrate that hostility towards journalists is now institutionalised and that law enforcement agencies believe they are well within their rights to physically attack them. Journalists working in small towns are the most vulnerable to this kind of attitude. In February, assailants beat up M. Nagarjuna Reddy, a journalist in Andhra Pradesh’s Chirala town, for exposing a local MLA’s involvement in illegal sand-mining activities. In September, Sanjeev Gopalan, a reporter for the Malayalam-language Kalakamudi Weekly in Kerala’s Varkala town was beaten up by local police because he wrote a story alleging their failure to protect women from harassment.

Also read: For Some More Than Others, Being a Journalist in India Comes at a High Price

This attitude is rooted in the fact that the political leadership of India treats the free press with contempt. In the past, Prime Minister Narendra Modi has called journalists “news traders”, implying that they took money to do stories. Vijay Kumar Singh, a minister in his government and a former chief of army staff, used the term “presstitutes”, and Kiren Rijiju, another minister, asked journalists not to question the police and authorities because “this is not good culture”. These irresponsible utterances by those holding public office only strengthens those who want to silence the media.

However, it isn’t just political authorities and law enforcement agencies who pose a threat to journalists. A more worrying trend is that even the judiciary – considered the custodian and upholder of civil liberties – is failing in its duty to preserve press freedom. In May this year, the Supreme Court of India banned journalists from reporting on the statements of Justice G.S. Karnan, a judge in the Kolkata high court, who was sentenced to six months in prison for contempt of court. In August, a court in Delhi banned the sale of a book which chronicled the rise of godman Baba Ramdev. In October, a court in Ahmedabad ordered The Wire to refrain from reporting on the businesses of Jay Shah, son of the BJP president Amit Shah.

In both these cases, the courts issued ex-parte injunctions – rulings without giving a chance to the accused to present their side of the story. Orders like these, coupled with criminal defamation proceedings and even the mere threat of such cases, severely dent the morale of journalists which in turn leads to self-censorship. In extreme cases, some editors end up losing their jobs because they chose to publish investigative stories that earned them the threat of a lawsuit from a large corporation. That’s what happened to Paranjoy Guha Thakurta, former editor of The Economic and Political Weekly, who had to resign in July soon after publishing critical pieces on the Adani Group in the journal. 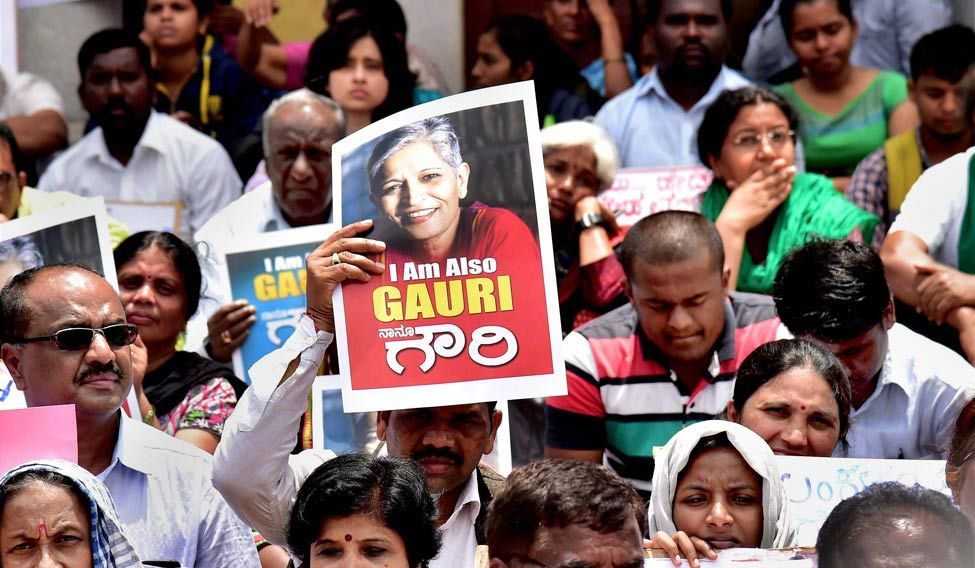 Citizens with posters and placards during a protest against the killing of journalist Gauri Lankesh. Credit: PTI

Another journalist who lost his job was Bobby Ghosh, editor-in-chief of The Hindustan Times. Ghosh, who ran the paper for a little over a year before he stepped down due to “personal reasons”, launched a number of digital projects during his tenure. One of them was the ‘Hate Tracker’ that documented the rise in hate crimes in India since 2014. Soon after his departure, The Wire ran a story which revealed that Shobhana Bhartia, owner of The Hindustan Times, faced “sustained pressure from senior ministers” over her paper’s political coverage and the government’s unhappiness with the ‘Hate Tracker’, which was quietly pulled down in October, without any explanation from The Hindustan Times.

Ghosh’s exit illustrates a malaise that has long afflicted Indian journalism where proprietors of big media organisations either succumb to political pressure or bend over backwards to please those in power. In February this year, my CPJ colleague Steven Butler and I met a number of journalists in Delhi and Mumbai who told us (on condition of anonymity) about rampant self-censorship in newsrooms because editors and reporters feared a backlash – either from their owners or political leaders.

Also read: Journalists Are Essential to a Democracy. A Few Blemishes Shouldn’t Mean We Forget That

In an atmosphere where it is increasingly becoming difficult to speak truth to power, what steps can reporters, editors and, most importantly, media owners take to ensure that the press remains free and vibrant? The need of the hour is for journalists to stay united, to display a sense of fraternity. One way to do that would be to establish a CPJ-like organisation in India, that advocates for press freedom and protects journalists whenever when they’re under fire. Besides being headquartered in Delhi, each state capital should have a chapter where aggrieved journalists can go and report the hurdles they face in the line of duty.

To assemble at a press club or take out a protest march isn’t enough. What is needed is a collective that will fight to preserve the right to free speech. Only then will the media be able to speak truth to power, without fear or favour.

Aayush Soni is India correspondent for the Committee to Protect Journalists, a non-profit advocacy group that promotes freedom of the press worldwide. Follow him on Twitter @aayushsoni