International Federation of Journalists Urges India to Protect Its Journalists 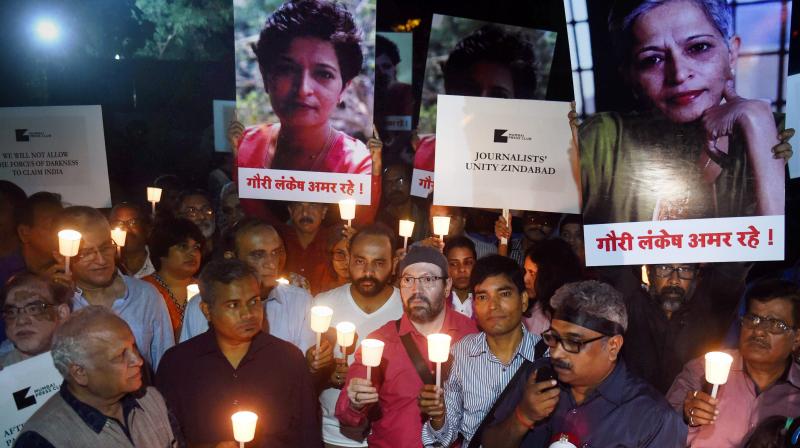 New Delhi: Three Indian journalists were murdered in September, including one who was killed while covering a protest that turned violent. In addition, several journalists and media organisations have received threats due to the work they do. Taking note of all of this, the International Federation of Journalists (IFJ), a group of journalists from across the world that promotes press freedom, has urged “the Indian government to institute measures to ensure the safety of journalists around the country”.

Gauri Lankesh, the editor of Kannada tabloid Gauri Lankesh Patrike, was shot dead at her home in Bengaluru on September 5. The investigation into her murder has revealed “significant” similarities with the murder research scholar M.M. Kalburgi – including the use of the same gun.

On September 20, Santanu Bhowmick, a reporter with Bangla channel Din Raat, was killed using sharp weapons while covering a clash between the Indigenous People’s Front of Tripura (IPFT) and the ruling CPI(M)’s tribal wing in Tripura’s Mandai area.

Also read: For Some More Than Others, Being a Journalist in India Comes at a High Price

On September 23, journalist K.J. Singh and his 90-year-old mother were found murdered in their home in Mohali, Punjab.

The IFJ has also highlighted other incidents that indicate the shrinking space press freedom in India. Journalists were injured in Varanasi when the police lathi charged protesting students at the Banaras Hindu University. Biju Muthathi, a television journalist in Kerala, received death threats over to his documentary, Thendigalude Daivam or ‘God of Beggars’, about a temple that shelters the aged and destitute. On September 20, people attacked the Alappuzha district office of Kerala-based Asianet News channel, apparently because aired reports linking a state minister to a land encroachment incident, the IFJ’s statement lists.

Given all of this, the international group has asked that “Indian authorities to act immediately to ensure safety of journalists and media; and speedy investigation and prosecution in crimes against journalists to ensure such incidents are not repeated”. The lack of prosecution, the statement continues, emboldens the attackers.