In Election Season, Assam's Cult of Sankardev Has Many Claimants

He was a reformist saint, but his legacy has been corrupted and is now being manipulated for political purposes 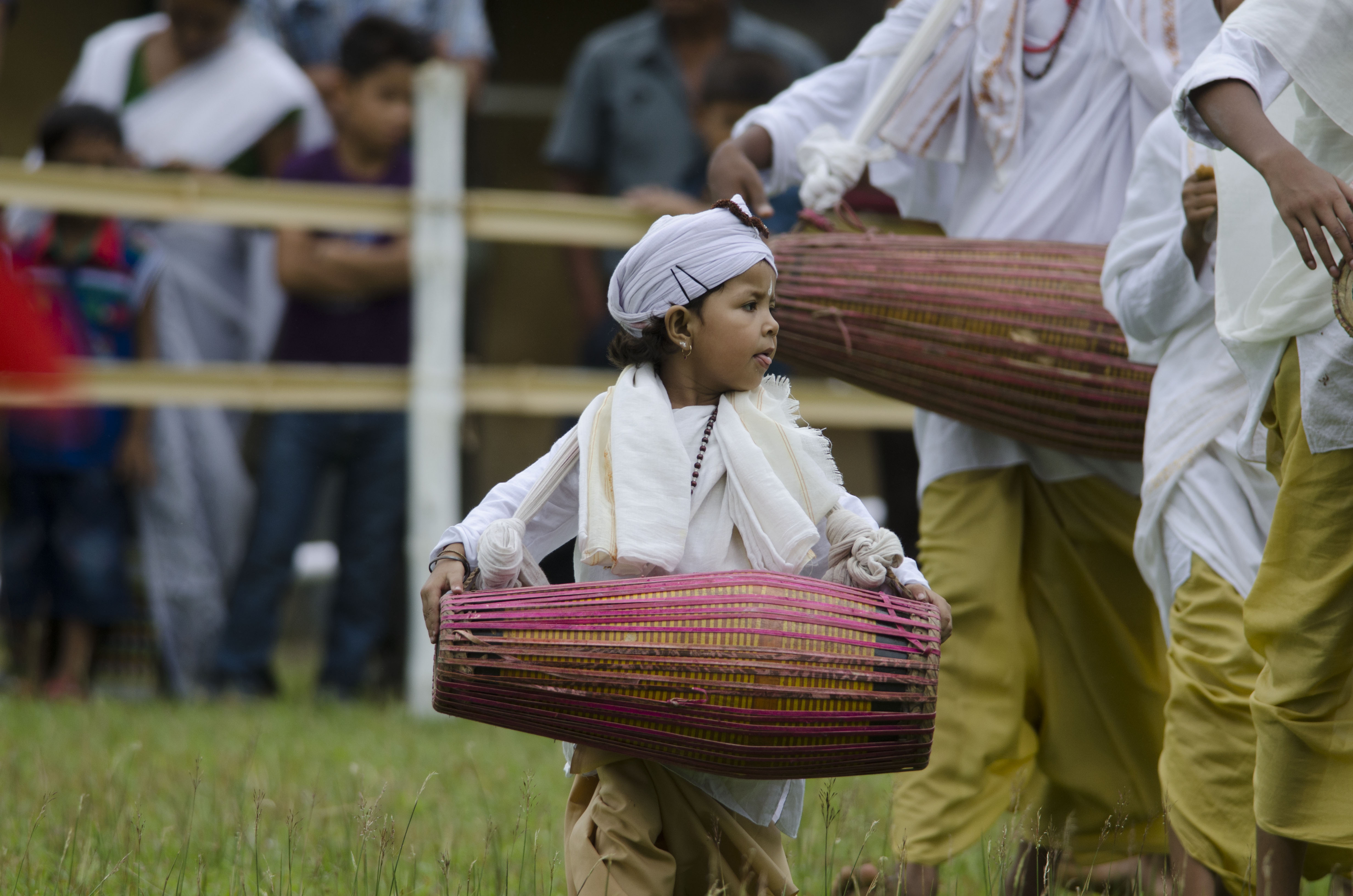 Just recently, Rahul Gandhi visited Sivasagar, a town on the south bank of the Brahmaputra in Assam, to kick off the Congress party’s campaign for the upcoming state elections. He was the third major politician in a month to cite the legacy of the poet ‘saint’ Sankardev, born more than 500 years ago in Assam who brought the Bhakti movement to the state’s cloistered people.

The first was Prime Minister Modi, who was invited by an organisation called the Shrimanta Sankardev Sangha, a religious non-profit that deifies Sankardev, and rejects the institutions that were born in his wake.

The SSS invited PM Modi to speak at its 85th members’ conference: a crowd of four lakh Vaishnavas showed up for his 14-minute speech, and an estimated 1.5 million — half of the SSS’ total members — visited the four-day event where Rs 1 crore was collected in public donations alone. At the same conference, but in a separate public forum, Assam’s chief minister Tarun Gogoi promised Rs 7 crores in funds to the Shrimanta Sankardev Vishwavidyalaya, still in the works.

Sankardev is a beautiful myth whose legacy has eroded over the years, the institutions built in his name sending his creed hurtling towards inauthenticity. In a new trend, he seems to be becoming appropriated by political parties, and religious lobbies such as the SSS in ways that suit their diverse agendas. Sankardev was born in Nagaon in c.1449, and lived for 120 years. He grew up with an education in the scriptures, the epics, music, weapons and war. He also learned to weave and make inks and dyes, draw and make musical instruments.

His literary and artistic contributions live on, today, through the annual Raas festivals held in satras, or neo-Vaishnavite monasteries, by bhokots, or resident monks. The Assamese laity also commemorates its own take of the Mahapurush’s works in folksy pantomimes, which are louder and more brash than the fine classical renditions of bhokots.

A philosopher-king and a pacifist Sankardev refused to rule when the time did come for him to take up his Shiromani-ship of his family estate, a petty fiefdom. Nine years after his wife’s premature death — a transformative time for the saint — he handed all responsibilities of the estate to his uncles to leave on a journey that would last twelve years.

He would go up to to Banaras, Prayag (Allahabad), Vrindavan and Puri. He became familiar with neo-Vaishnavite movements led by his predecessors, such as the great Banaras poet Kabir and met his contemporaries like the 24-year-old Guru Nanak, who was exploring his own vision of a monotheistic doctrine he would go on to preach as the Ik Onkar Satnam.

When he returned to Assam he started his mission for the propagation of the Eksarana Naam Dharma that rejected the Vedic social structure, rituals, fasting and the supremacy of the Brahmins, using local languages rather than stuffy Sanskrit. He impressed peasants, Brahmins and kings, and the followers’ numbers steadily grew as he took into his fold shaktas, tribespeople and Muslims. He remained firmly anti-establishment, to the extent that his life at times was insecure. He was persecuted by Brahmins and opposed by rulers who feared his soft power.

“Sankaradev did not trust kings and Brahmins as people who could lead a life of a Vaishnava as he visualised it,” says Dambarudhar Nath, author of the History of the Koch Kingdom. “Naranarayan was the greatest king of the Koch Dynasty of Assam… educated in Banaras and a Sanskrit scholar. But even though the king gave him shelter and patronised him, Sankaradev refused to initiate him.”

Sankardev died in 1568. But the colossus that was the neo-Vaishnavite religion of Assam continued to grow, even if not in a direction Sankardev would condone.

In time, Ahom kings granted the neo-vaishnavas thousands of bighas of land in Majuli, a far-flung river island, great for dedicated study and worship but where the neo-Vaishnavites had little contact with the mainland.

“This was a way for the Ahoms to keep the powerful satras under control, but also at an arm’s length,” Arshiya Sethi, an independent scholar and Sattriya dancer, said.

With all the land came more peasants who converted to the religion and earned revenue for the satras. As the religion grew, so did the need for grants – after all, there were thousands more bhokots to keep alive. Eventually satras emerged as powerful landlords and their economy started to look remarkably feudal.

“Like all other feudalist systems, the satras cannibalised themselves,” said Sethi. “There was a violent and fragmented peasant revolt known as the Maomara Rebellion [led by the Moran hill tribe, untouchable fishermen and sudras] which continued into the mid-eighteenth century.”

The corruption continued. Followers were divided into four sanghatis or groups of which two were entirely set up on the basis of caste: Brahma Sanghati was set up to attract followers from the higher castes, while the Kala Sanghati was an order of the most marginalised. Soon the old Brahmanical conservatism, with practices of casteism and untouchability, infiltrated Assamese neo-Vaishnavism.

Recently, however, Assamese Vaishnavas seem to be reorganising, again. Turning a new chapter in their 85-year-old history, they have partnered with Modi who seems to have found the perfect cipher in Sankardev for his rashtravaad (nationalism). He said people outside Assam feel incredulity at hearing of a man who lived five centuries ago and evoked the idea of a “Bharatvarsh”. A Raas performance, depicting the life of Krishna, by the residents of the Kamalabari satra in Majuli. Credit: L Terang

Sethi, who helped to induct Sattriya into the official list of Indian classical dances in the 1990s, is sceptical about the sense in which Sankardev’s idea is being put to use again. She believes the religious and social reformer — newly enriched by his travels abroad — talked about the honour it was to be a part of Bharatvarsh, “but he did not evoke an idea of nationhood which did not exist at his time – he spoke as a social reformer and not as a nationalist. He was placing Assam’s region and culture in a larger context.”

SSS too believes they have no place for communalism — as the Mahapurush would have liked — but without irony criticise the work of Christian missionaries in the northeast. Churches springing up in the Vaishnava ground-zero, Majuli, are a particularly sensitive subject.

“We are the only hindrance for the missionaries in the tribal areas of Assam, especially in Majuli,” said Khogendra Mahela, a trustee at SSS. Some of the converted are “returning” to Sankardev, he added, though “very slowly”. “It is only in the last 10 years that we have have become so active that people have come to realise that we have the right vision.”

Christian converts aside, the public enemy no. 1 in Assam is the Muslim. And all the Muslims here are assumed to be Bangladeshi until proven innocent. The 2001 census revealed there were three million Muslims living in the country who were born in Bangladesh.

Some sources claim that as many as 1.5 million of them came into the country in the last three years alone. The Muslim population is blamed for the increase in crime and terrorism, for land encroachment, and for the worsening man-to-land ratio, which may not matter in an industrialised economy but does rankle in an agrarian economy such as Assam.

Some accuse the the Congress party, which has ruled the state for nearly 15 years, as being complicit in the influx, as it stands to gain from ‘bogus’ Muslim voters. As a result, migration (the majority of which is indeed illegal) has become a chief theme in the politics of the state and it ties in with the politics of the satras.

According to a recent Asom Satra Mahasabha (ASM), an umbrella organisation of the neo-vaishnavite monasteries, 7,000 bighas of land belonging to satras was encroached by illegal immigrants. The organisation said this amounted to 85% of land belonging to 39 satras. Though this might take into account the smaller satras as the largest own land much in excess of the amount of land — 7,000 bighas–stated as being encroached. The ASM refused to reveal the total landholding of any individual satras.

“Land-grabbing is a myth,” Gogoi told newspapers in response. Recently he went as far as to say he would quit if these claims were proven beyond doubt.

“The satras always practice politics of the status quo. Historically, the majority of the big Satras aligned with Ahom kings, and then the British for increasing their material benefits,” according to Mayur Bora, Assamese author and political columnist, calling this a ‘politics of convenience,’ a mainstay of satra politics; it seems that both the ASM and the SSS have to gain from aligning with the BJP.

While no obvious connection exists between the RSS and the SSS, the anti-minority rhetoric of the SSS is remarkably similar to that of the RSS, and Modi’s co-optation of Sankardev’s call for the unity of the Assamese people under a Bharatvarsh points to a hawkish position against all foreign threats.

The satra that hindered Rahul Gandhi’s entrance was the establishment in Barpeta, one of nine districts from a total of 27 in Assam with a Muslim majority. Accusations were made that RSS had a hand in this, something the satradhikar in Barpeta, denied.

In defence, the BJP said the RSS did not run ‘temples’ and indeed they do not — SSS is deeply antagonistic towards satras and satradhikars, and the details were perhaps not as well known in November as they are now after the SSS made its populist agenda public with Modi’s visit this month.

Bora is unsure if the SSS’ support for the BJP will translate to votes at the coming state elections: “Modi, RSS, the SSS – they are all the fringe and they can come and do their electioneering and they can believe that the followers of the Sangha will listen to its dictates but nothing can be further from the truth. After years of oppression at the hands of the deeply discriminatory practices of the satras and being affected by the poisonous effects of Brahmanism they won’t vote for the BJP and what it stands for,” he said.

But the growing Islamophobia in Assam is a fact. Though the SSS cannot be squarely blamed for stoking the negativity against Muslims, it is cashing in by rallying its Vaishnavite members in BJP’s favour for material benefits, thus pointing to a ‘politics of convenience’ and the apparent turn away from the Congress party which has ruled the state for the last 15 years.

Divya Guha is an independent journalist based in Assam