While the Qutb Minar is celebrated as a historic and architectural icon, the Quwwat ul-Islam is seen as haunting evidence of destruction, trauma and fanaticism.

Masid-i Jami or the Qutb Mosque, which is incorrectly known as the Quwwat-al-Islam or the ‘Might of the Islam’ Mosque. Credit:Shashank Shekhar Sinha

Located within the Qutb complex on Delhi’s southern fringe is one of the most complex and controversial monuments of its kind, the Quwwat ul-Islam mosque. While its immediate neighbour, the Qutb Minar boasts of its towering presence, the mosque is infamously seen as a reminder of a violent and communal past. There is a remarkable contrast in the relative public positionings of the minar and the mosque. While the former is celebrated as a historic and architectural icon, the latter is seen as a haunting evidence of destruction, trauma and fanaticism. Guides escorting the visitors around the mosque take them on a graphic tour of the Muslim conquest of Hindustan and destruction of Hindu kingdoms and Hindu temples. Part of the mosque’s negative imagery is related to the complex circumstances under which it was constructed while the other part is connected to its nomenclature—the Quwwat ul-Islam or ‘Might of Islam’ as the mosque is officially known. The most controversial part of this structure is the foundational inscription placed on the eastern gate which now forms the main public entrance. Attributed to Qutbuddin Aibek, it says that 27 Hindu and Jain temples were destroyed to build the congregational mosque.

Masid-i Jami or the Qutb Mosque, which is incorrectly known as the Quwwat-al-Islam or the ‘Might of the Islam’ Mosque. Credit:Shashank Shekhar Sinha

Most visitors to the site do not know that it happens to be Delhi’s first Friday mosque (masid-i jami). Still few know that it was never known as Quwwat ul-Islam in its medieval past. So, how did the name (and the associated haunting legacy) come into being? The answer lies in the monument’s history and historiography.

The foundations of the congregational mosque

After defeating the Rajput ruler Prithviraj Chauhan, Muhammad of Ghur (from Afghanistan) returned home leaving behind the control of Delhi and Ajmer to his army commander (also his favourite slave), Qutbuddin Aibek. Upon Ghuri’s death in 1206, Aibek became independent and laid the foundations of what later came to be known as the Delhi Sultanate. Delhi became the capital of Hindustan. One of his first and foremost tasks was to create a congregational mosque. The new conqueror chose the former bastion of the Hindu rulers, Rai Pithora, as the site. The plinth of the earlier complex was enlarged to around twice its original size to build a platform to accommodate the structure. The spolia of the temples provided the ready-at-hand material to build the rectangular open courtyard, the pillared cloisters and the qibla wall (which indicates the direction of Mecca). Pillars from Hindu temples, preferably those carrying floral motifs, were used to build the colonnades. Upon a closer look, one can still see the remains of divine and human sculptures on the pillars in the prayer hall.

Interestingly however, the name Quwwat ul-Islam does not occur in any extant inscription or any chronicle of the Sultanate. As historian Sunil Kunar points out that this name is probably a modern corruption of an older name, Qubbat al-Islam that meant ‘Sanctuary of Islam’ or the ‘Axis of Islam’. He says that the term Qubbat al-Islam was at first ambiguously used by the contemporary chronicler Minaj-i Siraj Juzjani for Iltutmish’s Delhi and later applied to define the spiritual domain of the popular Sufi saint Bakhtiyar Kaki. Thanks to Monghol invasions around 1220s, a large number of Muslims from Afghanistan, eastern Iran, Transoxiana and Central Asian Steppes migrated to north India. Claiming that Iltutmish (Aibek’s successor) had brought people from all parts of the Islamic world to Delhi, contemporary chronicler Juzjani describes the capital of Hindustan in glowing terms as “the keeper of the Muslim faith”, “the dais of the Muslim community” or “the Sanctuary of Islam” in the eastern world. The other tradition related to Qubbat al-Islam is ascribed to Bakhtiyar Kaki who was greatly respected by Iltutmish as his spiritual master. Qutb Minar is also mentioned in contemporary accounts as Qutub Sahib ki lath after the saint’s staff (lath). His staff was believed to pierce the sky and, like the pir himself, connect the heaven with earth. In popular cosmology, he was regarded as the Qutb, the ‘axis’ around whom the world revolved or, sometimes by extension, Qubbat al-Islam – the Sanctuary of Islam.

How did the term Quwwat ul-Islam gain currency?

In 1847, the famous Muslim social reformer and educationist, Sir Syed Ahmad Khan published his first major work, Asar-al-Sanadid (The Remnant Signs of Ancient Heroes). This book on Delhi was strongly grounded in the positivist/factual tradition. Syed Ahmad Khan believed that only ‘correct facts’ could present an objective and scientific history. His work was therefore seen as an authoritative and factual and soon became (together with his editions of other Persian chronicles) a standard reference for later archaeologists and historians.

In Asar-al-Sanadid, he refers to the Qutb mosque by three names – Masjid-i Adina Dehli ya, Masjid-i Jami Dehli ya or Quwwat al-Islam – but does not discuss the origins of these. Since then one of the names, Quwwat ul-Islam, stuck. After all, it was congruent with the dominant image of Aibek as a military commander who defeated the Hindu kings and established a new Islamic polity – one manifestation of which was the mosque built out of the rubble of Hindu temples.

This kind of approach also found sympathy with the colonial scheme of Indian history, where, as historian Romila Thapar says, the ancient Hindu period was followed by a medieval Islamic period followed in turn by a period of British modernity. In such a scheme, the transition between the Hindu and Muslim period was marked by an antagonistic rupture and characterised by acts of iconoclasm. Colonial politics of a specific linear periodisation of history was both divisive and communal and the mosque played an important site in this scheme. Art historian Barry Flood says that the reused pillars of the Qutb mosque were cast in plaster and shipped (in the 1870s) to London for display as a part of the representation of the subcontinent in the architectural courts of the South Kensington Museum. This served a strategic purpose. Flood says that the narratives of conquest, decline and violence surrounding the mosque were instrumental in drawing colonial-era contrasts between the ‘Muslim’ and ‘British’ rule.

Guides and books on Delhi and Qutb prepared around the early twentieth century (including those by H.C. Fanshawe, Gordon Risley, J. Horowitz and J. A. Page) also adhered to the Quwwat ul-Islam nomenclature and framework thus adding to the mosque’s ‘violent’ legacy. Syed Ahmad Khan’s scholarship figured prominently in J.A. Page’s reports related to the Archaeological Survey of India (ASI) in the 1920s. Quwwat ul-Islam gradually became the official name of the congregational mosque. Interestingly, even ASI’s more recent publication, Qutb Minar and Adjoining Monuments (2002) draws heavily on Page’s work. Syed Ahmad Khan’s writings and the mosque’s new name also informed post-Partition scholarship of the site and the Delhi Sultanate. It has stoked populist and nationalist sentiments as well. 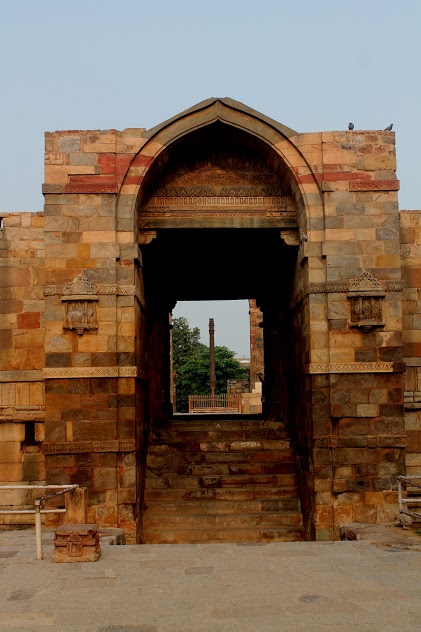 Towards a multi-layered history of the Qutb

At a time when there are plans to re-project the Qutb complex in the tourist world through the construction of an ambitious first-of-its-kind skywalk, there should also be efforts to restore the mosque in a larger historical context. That the core of the original mosque has been built out of temple remains is something which is well-known. What is not so well-known is that some parts of the structure were also newly constructed as were the subsequent extensions. The involvement of Hindu artisans and craftsmen and deployment of Hindu motifs and ornamentation also enriched the site. Flood examines the form of the foundational inscription – which talks about the temples being destroyed – and the related chronological and linguistic anomalies and adds a new twist to the tale saying that it should be attributed to Iltutmish rather than Aibek.

The spolia of the temples’ forms, as Kumar points out, is only a part of the multi-layered history of the Qutb complex. Its history also includes stories of independent and competing commanders (Muizzi Amirs) like Bahauddin Tughril who attracted renowned persons and merchants from different parts of Hindustan and Khurasan and constructed a similar mosque in Bayana; Sufi dervishes such as Nur Turk and his followers who condemned the ulama and even attacked the Qutb mosque; the popular veneration of Bakhtiyar Kaki; later Sufi saints such like Nizamuddin Auliya; and, how the writings of Syed Ahmed Khan influenced the later generation of archeologists, scholars and visitors. Qutb also forms the site of one of the finest experiments in Indo-Islamic architecture and provides insights into the socio-political evolution of the Sultanate. Such accounts would not only make the narrative more engrossing and lively but also more evidence-based.

Shashank Shekhar Sinha has taught history in Deshbandhu and PGDAV College at the University of Delhi. He has authored the book Restless Mothers and Turbulent Daughters: Situating Tribes in Gender Studies (2006) and now does independent research on tribes, gender, violence, culture and heritage. He is currently writing a series of articles on the World Heritage Sites in India.