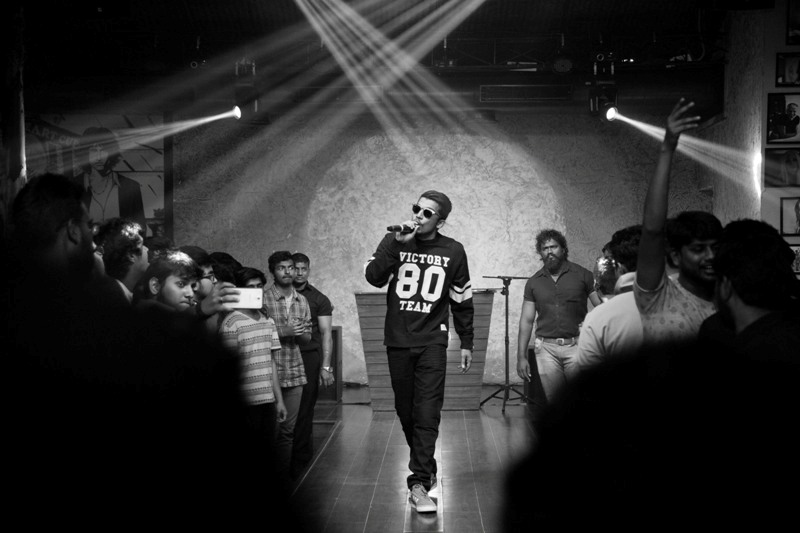 The locations are grungy, the words are raw, the message is hard-hitting. This is not the ring-tone friendly music coming out of Bollywood or the indie sound that often mixes easy Sufiana with fusion. This is the real stuff, emerging from the underbelly of humid, throbbing Mumbai, complete with edgy wit and angst.

Mumbai’s rap artists are making waves, picking up not just fans but also promoters and sponsors who are getting excited at the possibilities of the genre. The beats – and the steps – are obviously inspired from the west, but the sensibilities are strictly local; this is hip hop from the Mumbai ghetto with its own patois. Instead of the hood, the rappers have their gully, where life can be tough but there is always a moment to dance and have fun. These are singers from the wrong side of the tracks – literally, since most of them have emerged from the less salubrious eastern side of the city.

With names like TheSlumGods, Dopeadelicz, Swadesi and Mumbai’s Finest, these rappers sing – in Hindi, Marathi and even Tamil – about their immediate lives and larger social concerns. Then there are the solo artists – Divine, aka Vivian Fernandes, and the young, rising star, Naezy, real name Naved Shaikh. “I was called Crazy by many people, so I combined that with my name and came up with Naezy.”

In January 2014, Naezy uploaded his self-made video Aafat on Youtube and saw it becoming a viral sensation, hitting numbers that had never been seen before on an Indian rap song. Clearly influenced by the East Coast sound of hip hop artists – he counts Tupac Shakur as an influence – Naezy found a voice early on, with his clever rhyming in Hindi.

Mumbai sattar (Mumbai 70) is the pin-code of his home in Kurla, a working class neighbourhood that combines small-scale industry, garages and informal housing, where Naezy grew up. It was an assertion of identity, without being aggressive about it. In the short film made on his life – Bombay 70, which won an award at the Mumbai film festival – he speaks of his troubled upbringing, his petty thieving and his eventual realisation that he needed to do something with his life.

“I had anger in me, a lot of anger,” Naezy says. “I had written a song for my college function and did it in slam style; it was a hit and I loved the whole experience, going on stage, singing, and most of all the swag. Next year I wanted to sing again, but I was not selected—college politics, or perhaps because of my identity.”

At the same time, Naezy’s family – he lived with 10 members in two rooms – were needling him about his studies. “They kept on saying, do something better in your life.” One night, while everyone slept, he wrote and recorded the song on the Garage Tunes app on an iPad his Dubai-based father had sent them so that they could talk on Skype.

The next day he, along with a couple of friends, shot the whole video on the iPad and then edited it with a software he had downloaded.

The video got him responses from all over the world and soon enough, a call came from Bollywood — he wrote the song Birju for the film Hey Bro and it was lip synced by Ranveer Singh.

It was his next song Mere Gully Mein, sung along with Divine that really established Naezy as more than just a one hit wonder. Divine’s own song Jungli Sher has crossed the million viewers mark on YouTube. Sony Music, which represents Divine got a professional to produce it and the results show-it is far more polished than the previous effort but still retains an earthiness that can only come from lived experience.

The song has been shot in the by-lanes of a slum and incorporates the daily rhythm of life in those settlements; the locals – kids, teenage girls, uncles and aunties – have all participated in it with great enthusiasm.

“My own hood people are happy at my success but there is a lot of jealousy too – this guy has become so big he doesn’t keep in touch anymore, doesn’t meet us. How to explain that I am busy, writing, performing (and) composing,” says Naezy. He is now represented by Only Much Louder, which is producing his next album, but he retains an artlessness and is very much his own boy, answering questions confidently and frankly wondering how working with professional marketers will change him.

Naezy’s latest song, Haq hai, is a glossy video by the well-known hip hop producers Sez and retains his signature style of social commentary. “I wrote the song on my own, without telling anyone –it is about our rights, and I suggest we should all find our own destiny and meaning, even if it means going against parents/elders.”

His own elders have been less than understanding about his music. “My family has not really grasped what I am doing. They ask – why don’t you have a proper job? Why don’t you go to the office like everyone else. Also, they don’t touch the money I bring in – they think it is haram ki kamai, because I earn it by singing, which is unIslamic. How to explain to them that it is music — they too used to listen to Mohammed Rafi at one time.” He is not letting these objections come in his way; if anything, he will just channel it in his songs.